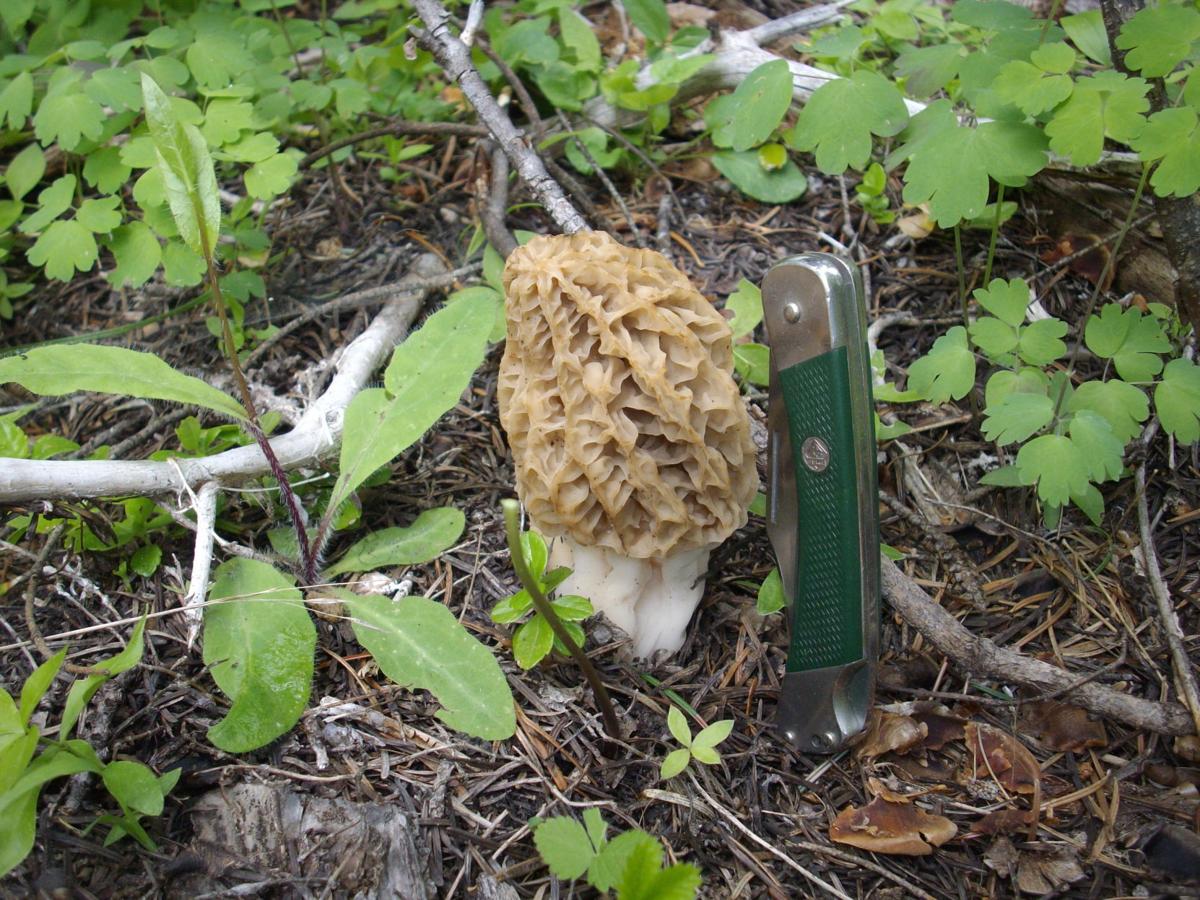 Morels: If you want to be a real picker then you have to use a knife to cut them off at the ground and carry them in a mesh bag to spread the spores.

If you haven’t ever tried morel mushrooms you’re missing out on nature’s best outdoor treat. Or for that matter, the best food ever since manna dropped down from heaven in the wilderness. I’ve been in the beef business nearly all of my life so I can get good steaks. But for eating pleasure, a morel will rate right up there with a choice ribeye.

There are quite a few edible mushrooms in the Northwest Pacific but I’m not comfortable picking more than a few varieties. I took a mushroom class but still don’t feel comfortable venturing out of my comfort zone. If you make a mistake and pick the angel of death, well, let’s just say that you and God had better be pretty good friends!

LOL, so now that I’ve scared you spitless let’s proceed. The first season you ought to go mushroom picking with an experienced old timer and have them show you the ropes. They may be able to help you identify morels, shaggy manes, cauliflower, puffballs and calf brains mushrooms.

The good news is, morels are easy to identify. The only thing that I’ve seen that even remotely resembles a morel is the snow morel/false morel. But again, make sure that you go with an old timer the first season.

The growing season on morels is short. I’ll say something like a 1-2 week period max. They’ll pop out earlier at lower elevations and then you’ll find them later up higher. The magic formula for them popping out is for the soil to be moist and have a warm night or two.

I’m sure if you did a scientific study, you’d discover that their growth is triggered at a certain soil temperature. I find them up where I bear hunt around May 10 at 5,200-foot elevation. Of course I’m up there baiting from April 15th to June so I keep checking until the season hits.

It seems they jump out overnight. I’ve always threatened and maybe I’ll do it this year and that is to find a small one and put a marker by it. Then come back the next day and see if it’s grown 2-3 inches.

You want to be checking for them early and not be on the tail end of the season. Nothing is more disheartening than to find a good mess and they’re on the downhill side and deteriorated and you can’t eat them. So, it’s better to be early and barely find any than to be late and only find rotten ones.

So where do you find them? Ha, that’s the million-dollar question. I’ve hunted them for decades but still don’t have it all figured out. Everyone will tell you to look by old rotting logs. Well, there are a million old rotting logs in the forest and the majority of them don’t have mushrooms. Some people say to look under tamaracks. I seem to find them randomly. But there are some likely spots.

They’re not in a bog hole but I have a good spot that is a little bit of a hole which caused it to be moist. Along old logging roads. Especially on the sidebank above the trail. Last year’s logging operations where the ground is tore up. Check in old caterpillar tracks (bulldozers not the caterpillar bug. Their tracks are too small)!

Over the years as you find them go back to those spots. Not that it’s a hotspot every year but many times they are. When you find one on a hillside look up and downhill. Spores wash downhill and many times you’ll find more.

But now and then I find them in weird spots. Years ago I found a bunch on a grassy hillside. I’ve looked there every year since and never found anymore there.

But the absolute most magical spot is in last years forest fire areas. But the second year the burn has lost its touch. You can go to the Forest Service and get maps of old burn areas or pay attention to fires this summer and go back next spring.

I’m not sure if the fires need to reach a certain temp or what but a couple of years ago, I was up bear hunting and found where a random fire had run through the forest. It was a spotty little fire and I thought great! Nobody knows about this spot. But I didn’t find one mushroom in the burn. Weird.

But some years you’ll find clumps big as a cow pie. I remember at one fire year’s ago two of us couples picked two 5-gallon buckets each in no time at all and had to step over a million on the way out.

It about killed me passing clumps of 8-12 nice healthy morels.

Uggh, we are out of room. I’ll try to do a mushroom cooking article next week.