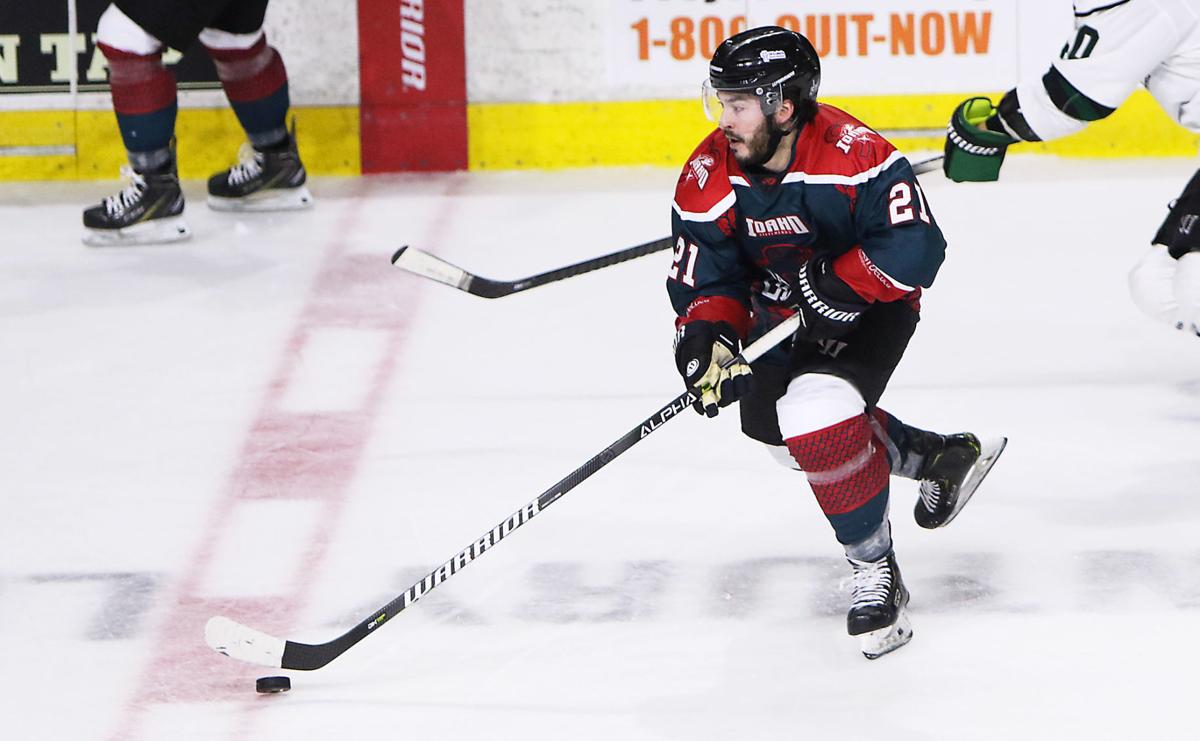 Idaho Steelheads forward Jonathan Charbonneau (21) drives the puck down the ice against Utah during hockey action at CenturyLink Arena on Friday. 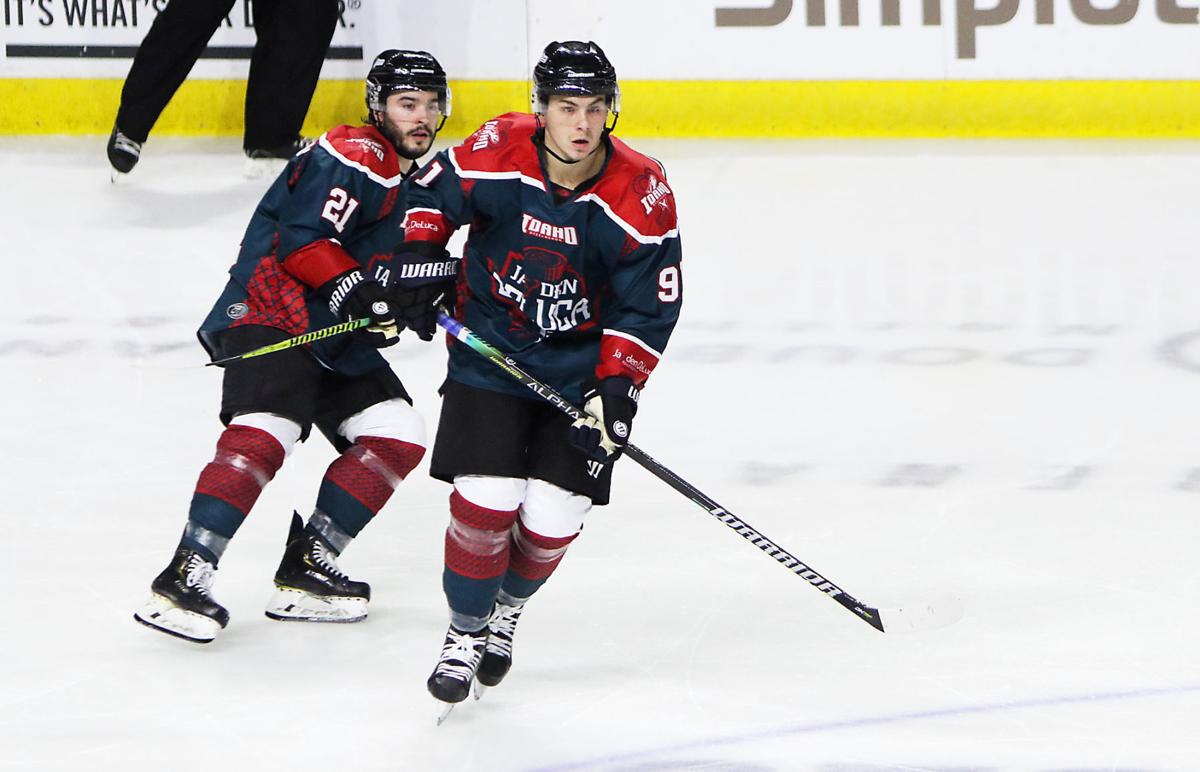 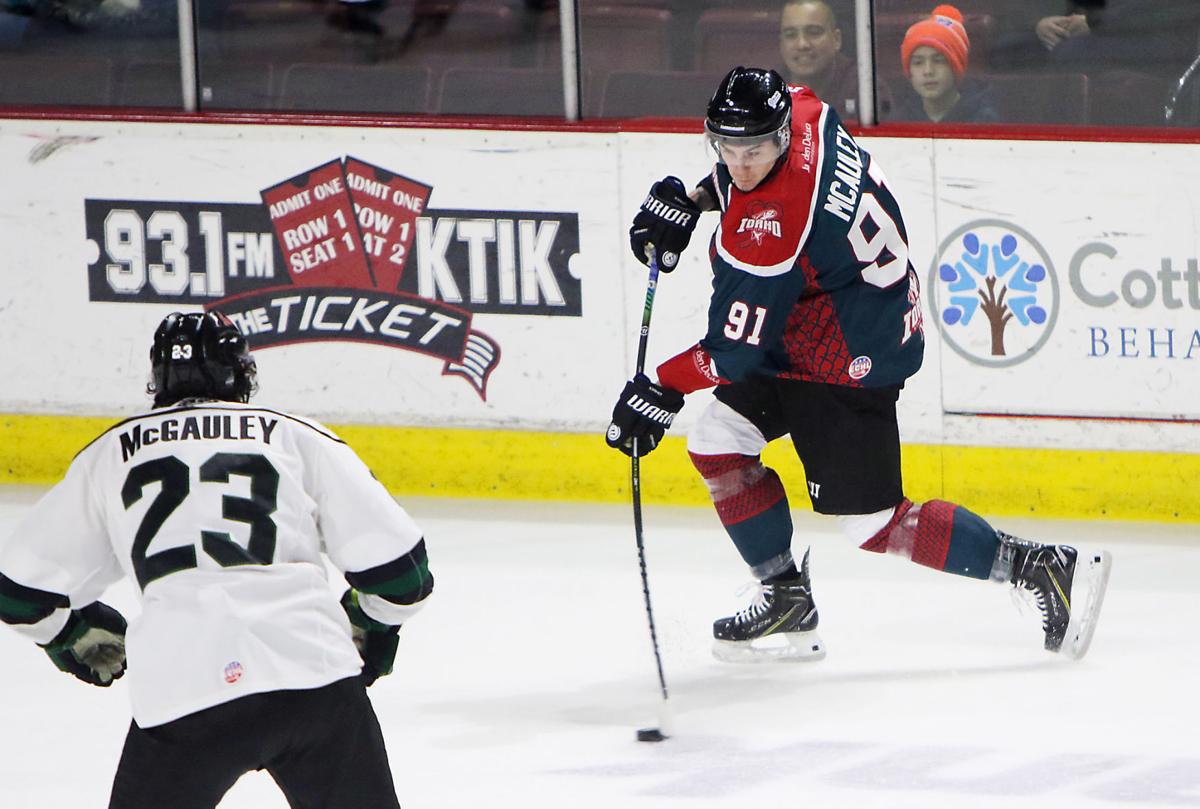 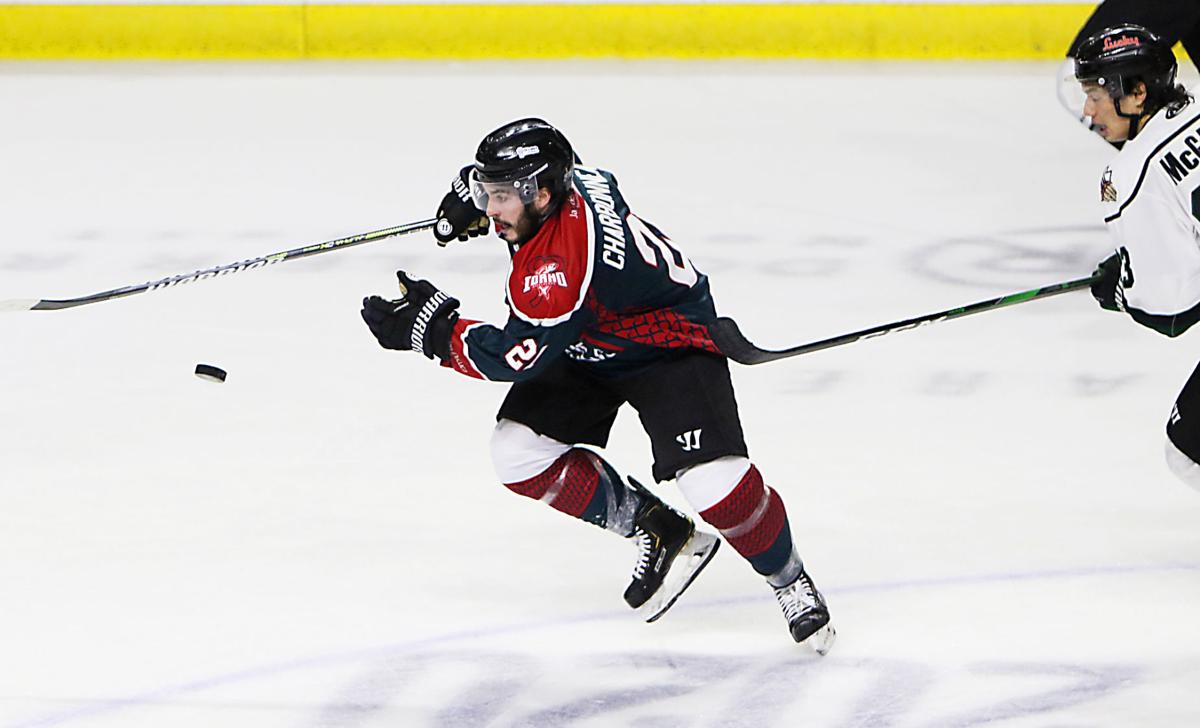 Idaho Steelheads forward Jonathan Charbonneau (21) chases the puck down the ice against Utah on Friday at CenturyLink Arena.

Idaho Steelheads forward Jonathan Charbonneau (21) drives the puck down the ice against Utah during hockey action at CenturyLink Arena on Friday.

Idaho Steelheads forward Jonathan Charbonneau (21) chases the puck down the ice against Utah on Friday at CenturyLink Arena.

BOISE — Colby McAuley got the crowd going Friday night, recording a Gordie Howe hat trick — a goal, assist and a fighting major — during the Idaho Steelheads’ 4-0 win against the Utah Grizzlies.

It’s that type of offensive production that the Steelheads will be looking for from McAuley and Jonathan Charbonneau, two forwards who came to Idaho via trades in recent weeks, as Idaho enters the final third of the regular season.

The Steelheads acquired Charbonneau and McAuley in an effort to up their offensive production after struggling at times in January. Entering Friday’s game, Idaho had been limited to two goals or less in nine of its 14 games since the turn of the year.

“We’re generating very high quality chances, and a lot of them,” Idaho coach Everett Sheen said. “Basically it’s just sticking to it and the odds are it’s going to go in at some point. We continue with our game plan and we continue to work hard, maybe we have to win a few games 2-1, 1-0 and then maybe the flood gates open.”

That certainly happened Friday, thanks in large part to McAuley. He assisted on an Anthony Nellis goal in the second period, then scored a goal of his own in the third, finding a loose puck in front of the net and putting it in. He completed the Gordie Howe hat trick with with 5:40 on the clock, taking on Utah’s Jack Jenkins by the boards.

“It’s my type of game, all the guys know I love to do it,” said McAuley. “Once I had a goal and assist, I knew I was going to do it. It feels good, I’d rather get a Gordie Howe than a real hat trick, anyways.”

McAuley was acquired from Orlando on Jan. 14 in a three-team trade which sent Conner Bleackley to the Maine Mariners. He’s in his third professional season, having recorded three goals and 10 assists in 25 games with the Solar Bears this year.

He immediately provided Idaho with chances, getting shots on net in all nine games he’s played with the Steelheads so far.

“He makes it tough for the defensemen to keep him out of there,” Sheen said. “He’s physical, he’s first on the forecheck, he’ll hit, he’ll get to the net. He’ll box out the defensemen in front of their own net and try to get to loose pucks.”

He got his first goal with Idaho during the first period of a 4-3 shootout win at Kansas City on Jan. 24, then scored Idaho’s lone goal in a 2-1 loss to Rapid City last Saturday.

McAuley also had an assist in a 3-1 loss to Tulsa on Jan. 18. He now has three goals and two assists in nine games since joining the team.

“It feels like home, being back here so close to Alberta,” said McAuley, who grew up outside of Edmonton. “Ever since I’ve got down here, it’s been good. I’ve fit right in, the guys are great, the coaches are good and the fans are even better.”

McAuley, who played a game in CenturyLink Arena earlier this year with the Solar Bears as well as with the Allen Americans two seasons ago, knew what type of crowd he was getting coming to a team like Idaho.

“Being on the away side is definitely different,” he said. “The fans aren’t friends with you. As soon as I started playing, the fans are on your side. There’s a lot of energy that comes from this building and I love it.”

Charbonneau, who was playing his third game with Idaho on Friday, had not played in the arena before. He was acquired from Toledo on Jan. 27 in exchange for defenseman Nolan Gluchowski. It had actually been the second day in a row Charbonneau had been involved in a trade. Charbonneau was packing his car, getting ready to drive with his girlfriend from South Carolina to Ohio that day before a call from the Walleyes informed him that he needed to change the final destination in his GPS.

Once he discovered it was a 35-hour drive to Boise, he concluded he better get on the road quickly.

He arrived in Boise in time to play in a two-game series with the Rapid City Rush last weekend.

“It’s been great so far, guys have been welcoming me in,” he said. “I was lucky enough to get two other French Canadians here to help me out. They got me settled in and move my stuff in, and things have been great since. I’m excited to be here, I heard a lot about the city, the team and the organization.”

The St-Columbian, Quebec, native was put on the same offensive line as Idaho’s two other forwards from Quebec, Nellis and Marc-Olivier Roy.

“We brought him in because he’s been a prolific scorer,” Sheen said about Charbonneau. “He’s been a prolific scorer wherever he’s been. This year he only has nine (goals), because he’s been buried in South Carolina. So we’re hoping for him to come in and find a scoring touch again. He’s got an incredible release and and he’s got a nose for the net, so that’s what we’re hoping for.”

Idaho goalkeeper Tomas Sholl stopped all 24 shots he faced, earning his fourth shutout of the season and the 11th of his Steelhead career. He became the Steelheads’ all-time career shutout leader, surpassing Steve Silverthorn, who had 10 from 2005-08.

“It’s good to get the personal achievement,” said Sholl. “It’s a good feeling, there’s a lot of great goalies that have come through here. Any time you can be talked about in the all-time list, it’s a great feeling. More importantly, it was a huge win for our room tonight. It’s an in-division game, a team ahead of us in the standings that we’re chasing, so those points are really huge. That’s the most important thing tonight.”

A.J. White and Brady Norrish also scored for Idaho, which wraps up a four-game homestand with another game against the Grizzlies tonight.