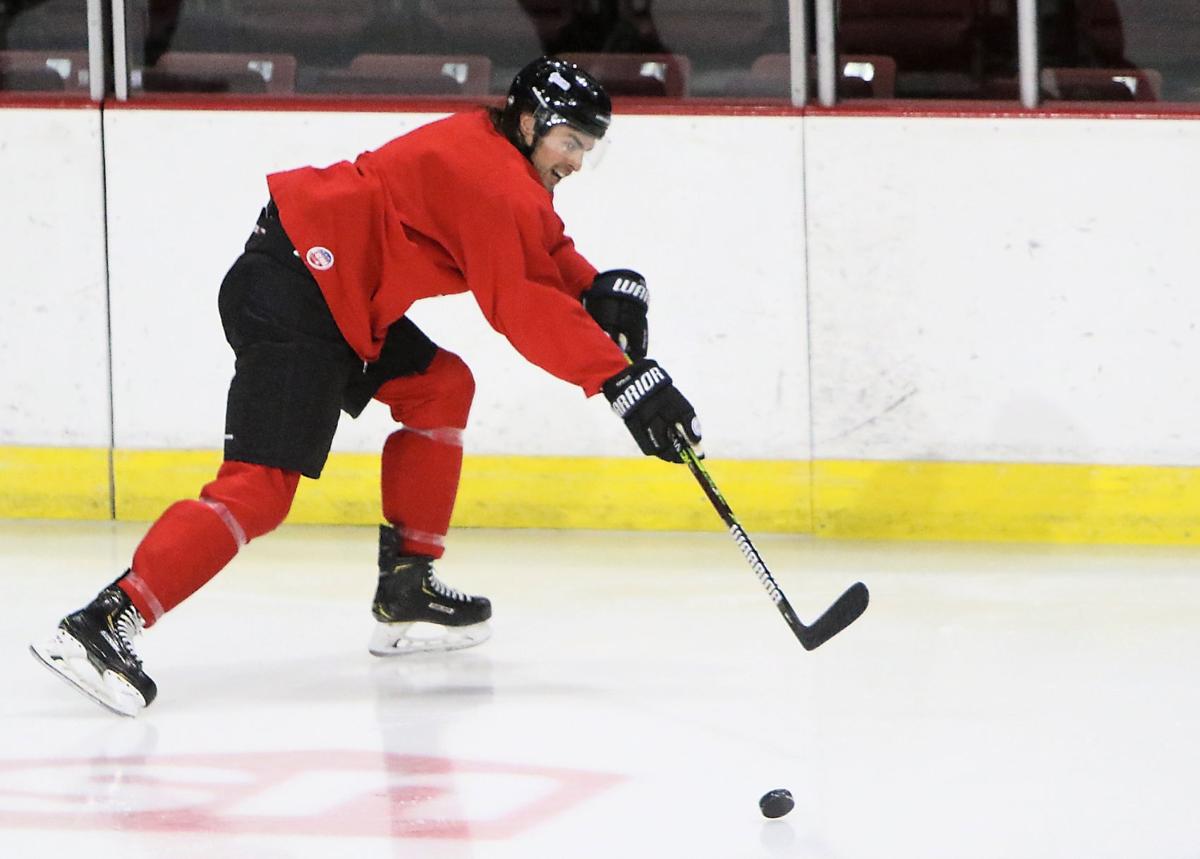 Idaho Steelheads forward Joe Basabara skates down the ice during practice on Wednesday at CenturyLink Arena. 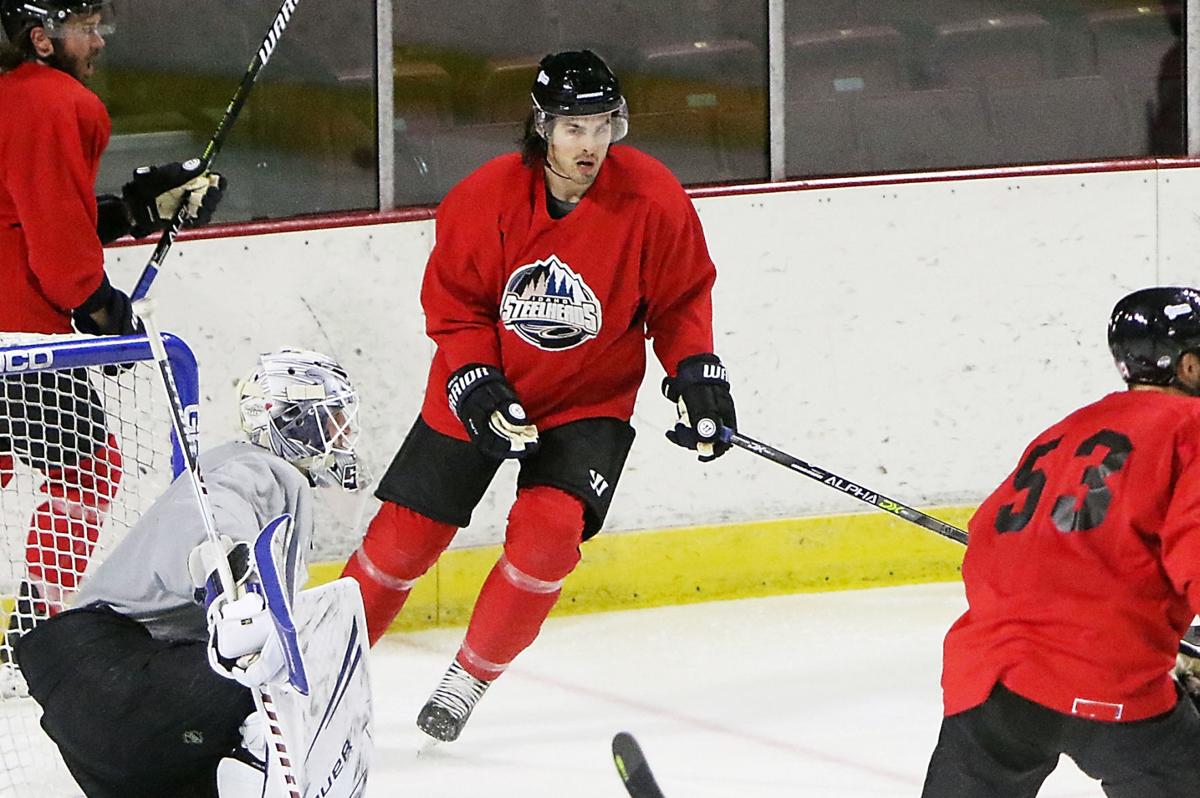 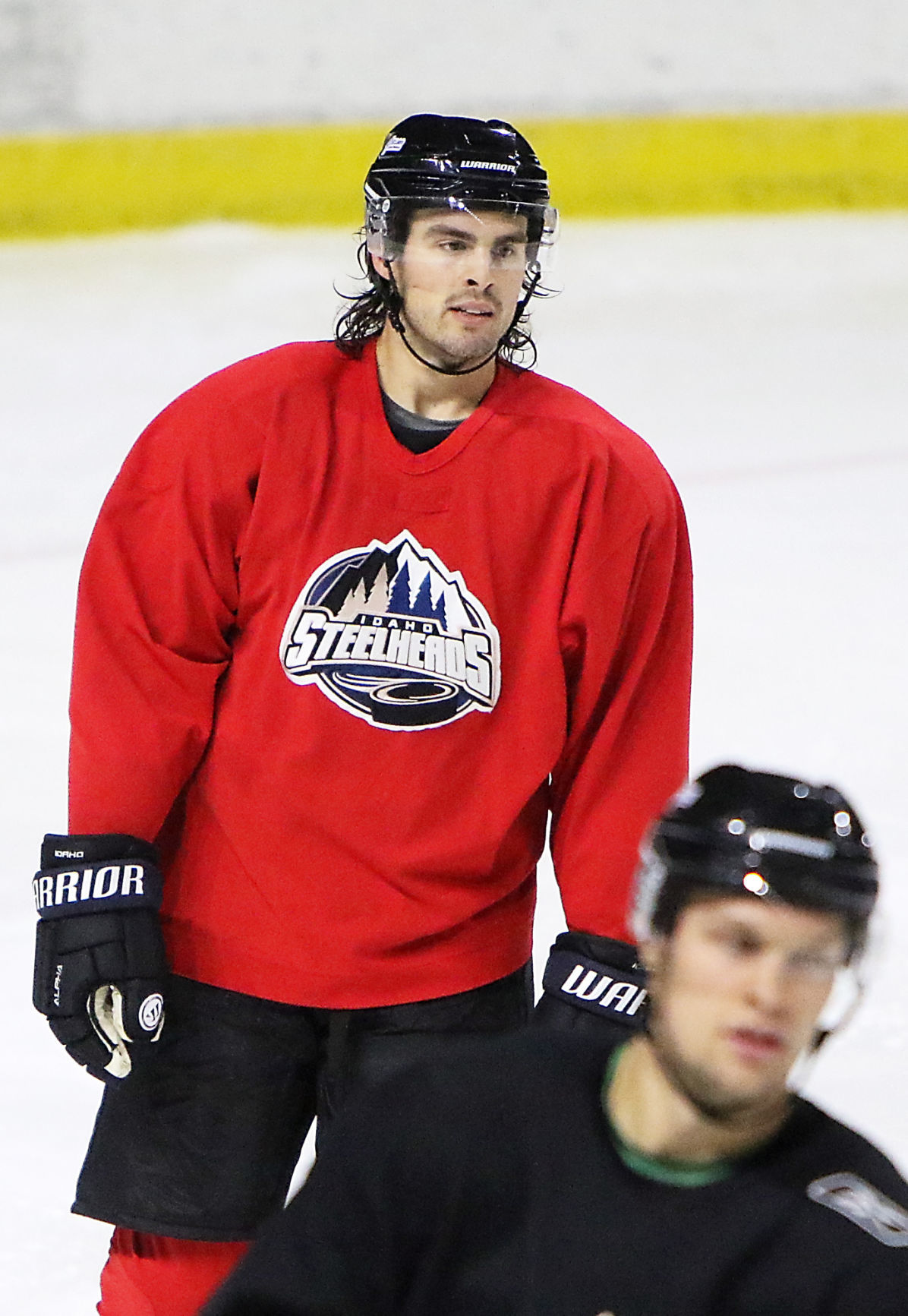 Idaho Steelheads forward Joe Basaraba (17) and Allen Americans’ Rick Pinkston (4) battle for the hockey puck during the the ECHL Western Conference quarterfinals on April 20, 2016, at CenturyLink Arena. After two seasons away from the team, Basaraba returns to the Steelheads this season.

Idaho Steelheads forward Joe Basabara skates down the ice during practice on Wednesday at CenturyLink Arena.

Idaho Steelheads forward Joe Basaraba (17) and Allen Americans’ Rick Pinkston (4) battle for the hockey puck during the the ECHL Western Conference quarterfinals on April 20, 2016, at CenturyLink Arena. After two seasons away from the team, Basaraba returns to the Steelheads this season.

BOISE — Joe Basaraba had an idea he wanted to return to the Idaho Steelheads before the 2018-19 season, but he had something he wanted to do first.

Education had always been a priority for the Fort Frances, Ontario, native, and the opportunity to further that while still playing hockey proved too much for him to pass up. So Basaraba packed his bags and headed to Scotland last year, where he was able to follow both of his passions.

After earning a Masters of Science Degree in International Human Resource Management at Abertay University, the forward signed with the Idaho Steelheads this offseason, two years after leaving the team.

“Going back to school and completing my Masters was a big decision for me to do,” said Basaraba. “Now that I have it, I’m glad I do. But the hockey was great, obviously it’s a bigger ice sheet there. But coming back here, it’s a fast-paced game and a little more physical.”

Basaraba and the Steelheads will play in their home openers this weekend at CenturyLink Arena. The Steelheads host the Witchita Thunder today and Saturday. He had points in both of Idaho’s wins in the season-opening series against the Utah Grizzlies last weekend. He assisted on Idaho’s first score of the season, Zack Andrusiak’s goal in a 3-2 win last Friday, then scored less than two minutes into Idaho’s 3-1 win against the Grizzlies the following night.

“It is nice to have Bas back, he was a big part of the group when he was here originally,” said Idaho coach Everett Sheen. “He’s a veteran presence, his size, his shot, he’s starting to play some of the best hockey of his career at this point, so it’s huge to have him on board.”

Basaraba, a third-round pick by the Florida Panthers in the 2010 NHL draft, spent two seasons with the Steelheads from 2015-17. In 119 games he notched 33 goals and 45 assists. After a 46-point performance in the 2016-17 season, Basaraba signed with the Greenville Swamp Rabbits, but he maintained a relationship with Boise, coming back to visit in the offseason.

Following a year in Greenville, he decided to make the leap to Scotland to go to school while playing for the Fife Flyers of the Elite Ice Hockey League, the top-tier hockey league in the United Kingdom.

He balanced a schedule of earning a Masters Degree through a one-year fast track program while recording 22 goals and 23 assists for the Flyers.

“It was a bit of a grind, for sure,” he said. “I know my first semester, up until Christmas, just with the amount of classes I had, I ended up missing quite a few practices. So it was tough in that aspect. But the second semester we were able to line up classes with practice a little bit better.”

He spent his offseason writing his thesis titled ‘Engagement Tactics to Increase Performance of Professional Hockey Players.’ After turning that in in August, he decided it was time to return to Idaho.

“I spent just about two years playing here and fell in love with the city and the people around it,” Basaraba said. “It holds a special place in my heart and I try and come here as much as possible. Now I’m lucky enough to play here again and I’m excited to see what the season has in store.”

He returns to a roster that has almost completely overturned from the last time he was here. The only player left over from his time here is forward Will Merchant, who had a stint in Greenville himself last season.

But the Idaho Steelheads are a team that places an emphasis on their history, and having a guy who spent two seasons with the team brought some level of familiarity to the players who hadn’t played with him in the past.

“A good amount of guys I played with played with him and they had nothing but positive and good things to say about him,” said captain A.J. White, who joined the Steelheads the season Basaraba left for Greenville. “I get to sit next to him in the locker room, so I get to talk to him every day. I’ve just learned he has a lot of fun while playing the game, but he’s very serious about it. I mean, his points speak for himself, so I think he’ll probably have a good year and we’ll probably ride him a bit here and there.”

Basaraba is excited for a year where he can focus solely on hockey and see where the sport can take him. He hasn’t closed the door on continuing his education, either.

But after the grind of last year, he said he’ll probably wait a bit before taking that next step.

“Obviously, finishing my thesis, there is a PhD opportunity,” he said. “But I’m definitely going to take a couple years off.”