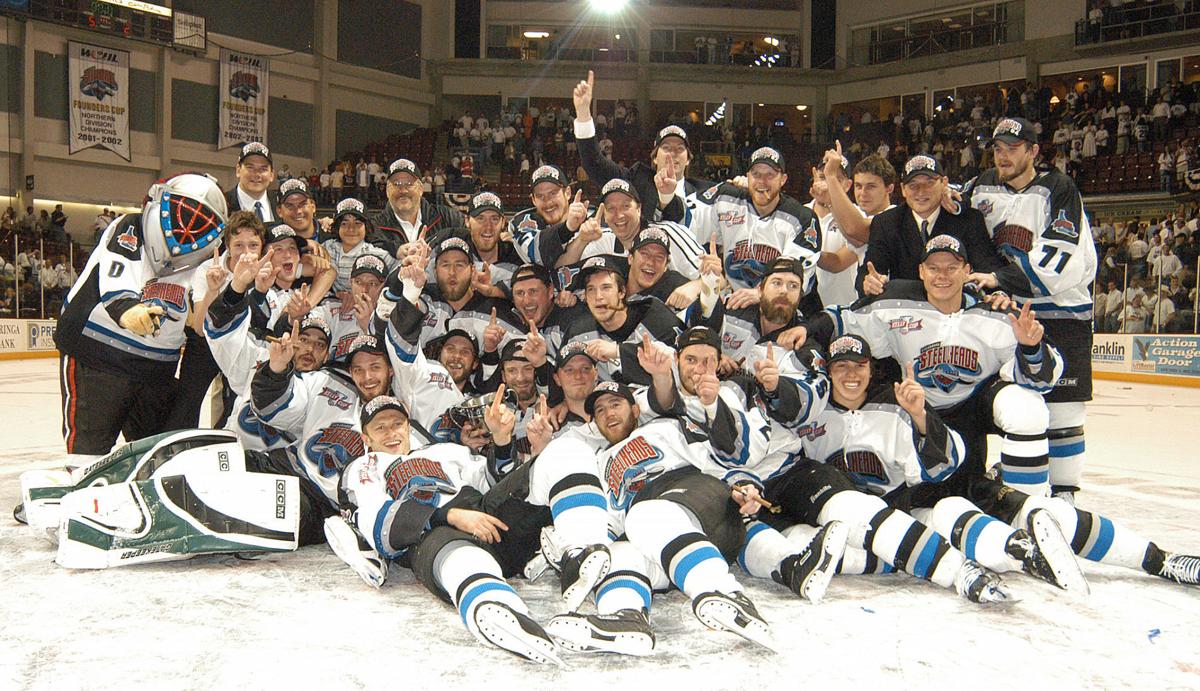 The Idaho Steelheads celebrate after winning Game 5 of the Kelly Cup Finals to clinch the ECHL championship on May 22, 2004 in Boise. 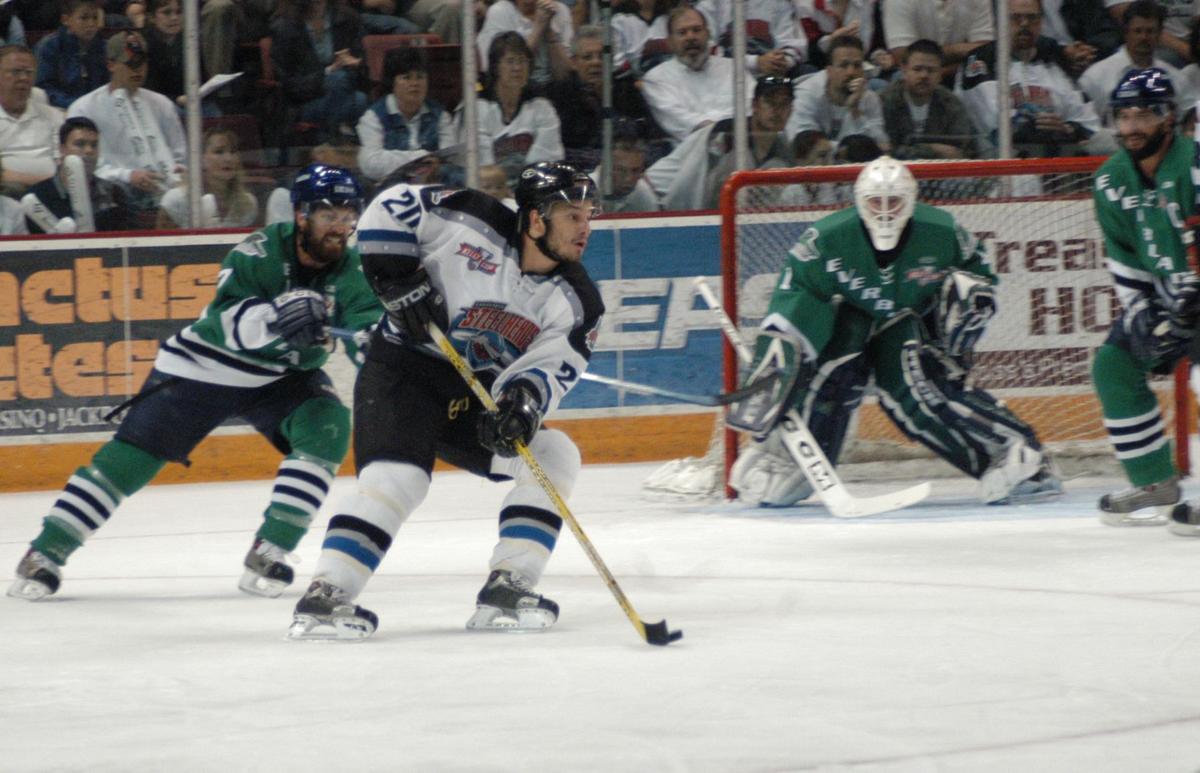 Idaho Steelheads forward Zenon Konopka skates with the puck in the Florida Everblades’ defensive zone during the 2004 Kelly Cup Finals. 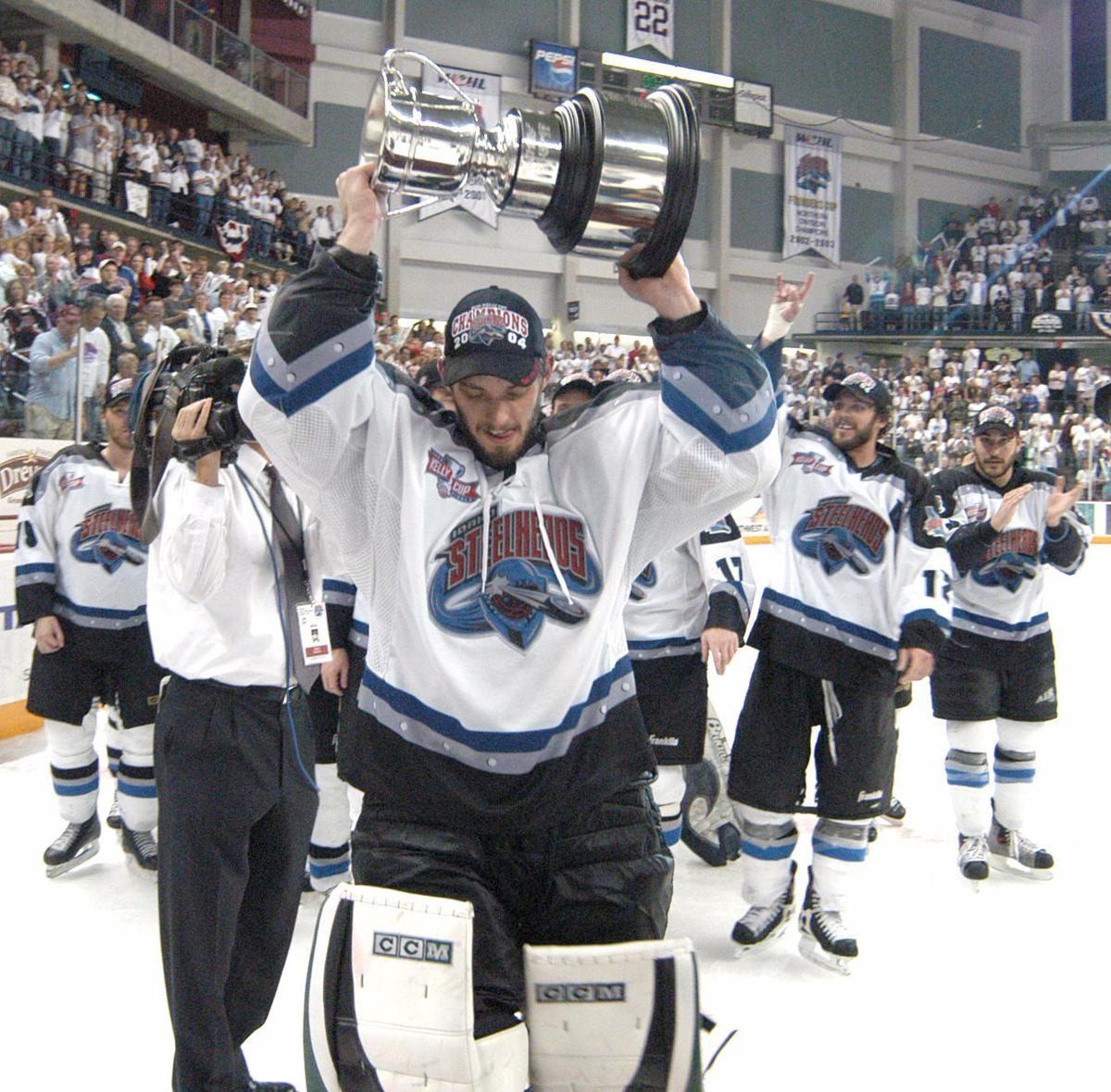 The Idaho Steelheads celebrate after winning Game 5 of the Kelly Cup Finals to clinch the ECHL championship on May 22, 2004 in Boise.

Idaho Steelheads forward Zenon Konopka skates with the puck in the Florida Everblades’ defensive zone during the 2004 Kelly Cup Finals.

John Olver forgets what the bill was for damages done by the Idaho Steelheads to the hallway and locker room at Orleans Arena in Las Vegas on April 9, 2004, but looking back, the bill was worth it for the Steelheads’ former coach.

Idaho had just come off the ice from a controversial 3-2 loss to the Las Vegas Wranglers in Game 2 of the first round of the 2004 Kelly Cup Playoffs. The Steelheads had held a 2-0 lead in the third period before recovering a Las Vegas shot and putting the puck in the net on the other end of the ice. But a goal judge ruled that the Las Vegas shot had actually gone in, so instead of a 3-0 lead, Idaho saw its lead cut to 2-1.

Even though Olver said the video clearly showed the Wranglers’ shot had not gone in, there was no video review in the ECHL at the time, so nothing could be done. Idaho gave up two more goals in the third period to end up on the brink of elimination in the best-of-five series, down 2-0.

The anger from that loss spilled over into the hallway after the game, stationary bikes were thrown and players like Zenon Konopka and Lance Galbraith were yelling out guarantees.

“I can’t remember the exact details of how it all played out, but I do remember yelling and screaming in the hallways,” Konopka said. “I said, ‘We’ll be back for Game 5, I guarantee you.’”

Konopka and the Steelheads made good on that promise. Idaho won two home games at what was then known as Bank of America Centre, returning to Las Vegas for a 3-0 series-clinching win.

That comeback sparked a championship run for the Steelheads, the first of two Kelly Cups the team won in its first four seasons in the ECHL. Olver built a team that knew how to have fun, but also would not be pushed around on or off the ice.

In it’s final three years in the WCHL, Idaho was a great regular season team, but could not break through and win the Taylor Cup. In 2001, the Steelheads forced a Game 7 in the Finals, but lost to the San Diego Gulls. They followed that up with the best record in the league the next two seasons, but were beat by the Fresno Falcons both years in the playoffs, 2002 in the Finals and 2003 in the semifinals.

“We were always that close,” said Scott Burt, a forward on that team, who is now an assistant coach for Idaho. “Then all of a sudden we join the ECHL and we had a good nucleus of guys, we had a good group that stayed around in Boise and we had a good time. But at the end of the day, we wanted to win.”

Seven players returned to Idaho for its first ECHL season, including Burt, captain Jeremy Mylymok and goaltender Blair Allison. They also added key offseason pickups like Jan Kopecky, the Czech Republic native who led the Steelheads in scoring during his only season in North America, and Darrell Hay, a defenseman who had played in the Kelly Cup Finals with the Columbia Inferno the season before, but was drawn to Idaho for the chance to get called up to their AHL affiliate, the Utah Grizzlies, who were coached by his father, Don Hay.

Darrell Hay played 10 games in Utah during the middle of the regular season. After Utah’s season was done, Don Hay, who had previously been an NHL head coach with the Phoenix Coyotes and Calgary Flames, came down to Idaho and served as an assistant coach for much of Idaho’s playoff run.

“Looking back at pictures and videos and things like that, it was probably the ultimate point of my career to do that,” Darrell Hay said about winning a title with his dad. “I’ve been watching “Last Dance” and the Michael Jordan stuff and how important his farther was to his life. I’m not comparing myself to Michael Jordan in any sense of the word, but when you get to the pinnacle of your career of craft, you realize the people that were there in the beginning of it. To be able to share that with them and just realize how much effort, blood, sweat and time you put into it, to be there and share that with that person, is an incredibly emotional feeling.”

Idaho was also able to sign Konopka to a two-way AHL/ECHL contract after Utah threatened to void his contract following an ankle injury from a horse riding accident. The Grizzlies would only sign him if an ECHL team would take him, as well. Idaho also acquired Lance Galbraith, Konopka’s junior hockey teammate with the Ottawa 67’s. Both were key pieces on the 67’s Memorial Cup Championship team in 1999.

Reunited, they played on the same line, along with Kopecky, giving Idaho its top line which could score, but also be physical. The line combined for 127 points and 452 penalty minutes in the regular season.

“The checking pressure that Konopka and Galbraith put on the puck, it was relentless forechecking pressure,” Olver said. “They drove to the net, they went to tough areas of the ice. They were our leading scoring line, but they were also a hard line to play against.”

In addition to being leaders on the ice, Konopka and Galbraith had some showmanship off the ice, as well. Before flying to Georgia for the Conference Finals matchup against the Gwinnett Gladiators, they dressed as Roman Gladiators for media interviews. While flying to Florida for the Kelly Cup Finals series against the Florida Everblades, they wore safari costumes dragging a fake alligator behind them.

“If they had Instagram or Facebook back then, Lance Galbraith and Zenon Konopka would be called heroes. They were 2004’s Biznasty and whoever else,” said Hay, referring to Paul Bissonnette, a former NHL player who now is a host on the Barstool Sports’ hockey podcast, ‘Spittin’ Chiclets.’ “The stuff was comical, but it wasn’t tasteless stuff. They were doing it to spark our group.”

Konopka, who would go on to lead the NHL in penalty minutes in 2009-10 with the Tampa Bay Lightning and again the following season with the New York Islanders, was playing in Utah at the end of the regular season, but with the Grizzlies eliminated from playoff contention, started asking to get sent down to Idaho for a chance to win a title.

The final piece of the puzzle came before Game 3 of the Las Vegas series, when goaltender Dan Ellis became eligible to play. Because Ellis was one of two goalies on Utah’s roster, AHL rules prevented him from coming down before Utah’s season ended.

Ellis was needed, as Allison had suffered a knee injury late in the season, forcing Idaho to use emergency backup goaltender Mike Betz in Game 1. It was the first professional appearance for Betz, who had just finished his college career at Ohio State. After a 4-2 loss in Game 1, Allison was able to return for Game 2, but wasn’t at 100 percent.

Ellis watched from the bench as Idaho suffered that heartbreaking Game 2 loss, but once he came in, things changed. He posted shutouts in Games 3 and 5 and made 25 saves in a 4-3 overtime win in Game 4.

“It was one of the funnest teams I’ve ever played on in my life,” said Ellis, who played in 212 career NHL games with Dallas, Nashville, Tampa Bay, Carolina and Florida. “They kept a real positive outlook on things. (Olver), he was a positive coach and he knew we had to play until we were eliminated. We went out that next game, we were able to win the next three and move on in the Kelly Cup Playoffs. It was quite the rush.”

Ellis finished the playoffs with a 13-3 record and a 1.86 goals-against average, earning him Playoff MVP honors. He had a third playoff shutout in Game 3 of the Kelly Cup Finals, a 1-0 overtime win, which put Idaho ahead 3-0 in the series.

The Steelheads missed a chance to sweep with an overtime loss in Game 4, but came back the following night to clinch the Cup in front of their home fans with a 5-2 victory.

“The year we had there in Idaho was the most special year I ever had in professional hockey,” said Olver, who left the Steelheads in 2005 to take an assistant coaching job at Northern Michigan, where his two sons were playing and now coaches high school hockey in Minnesota. “The personalities we had, the leadership, the characters, the friendships, it was an amazing group.”