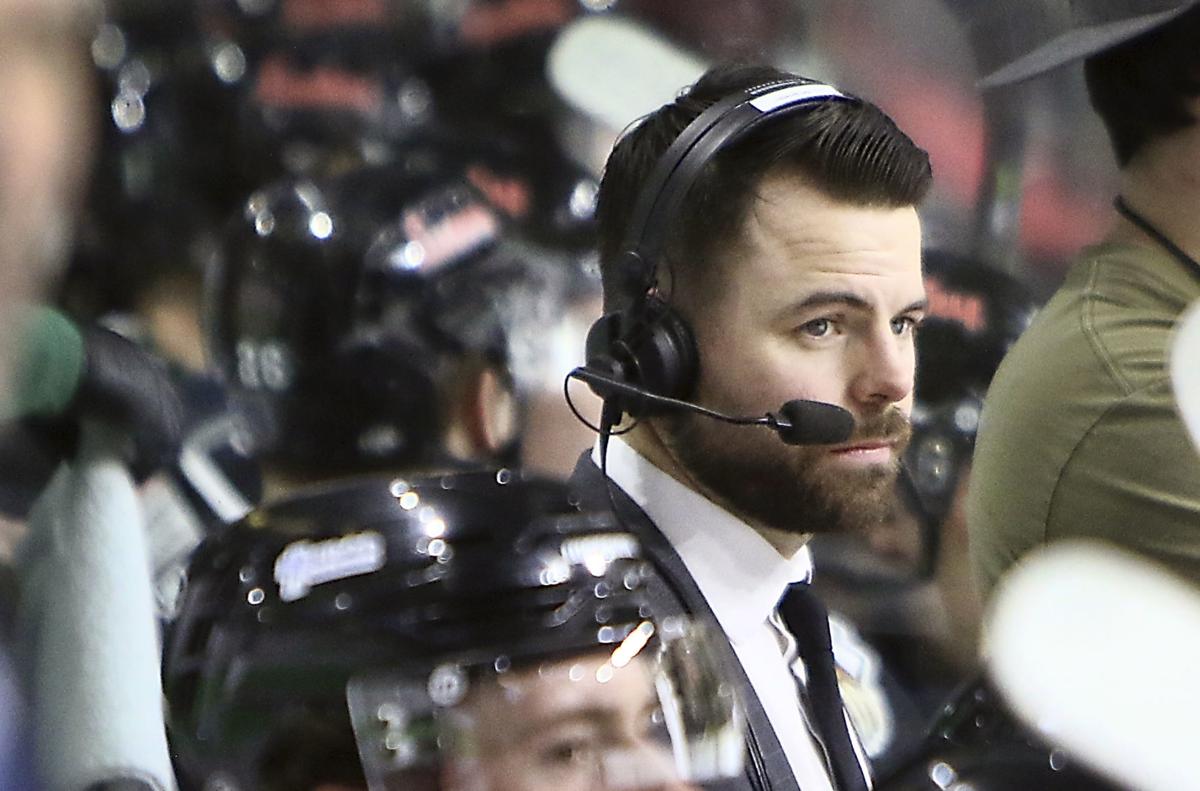 Former Idaho Steelheads’ forward Jefferson Dahl broadcasts from the bench as the Steelheads face the Utah Grizzlies on Wednesday. 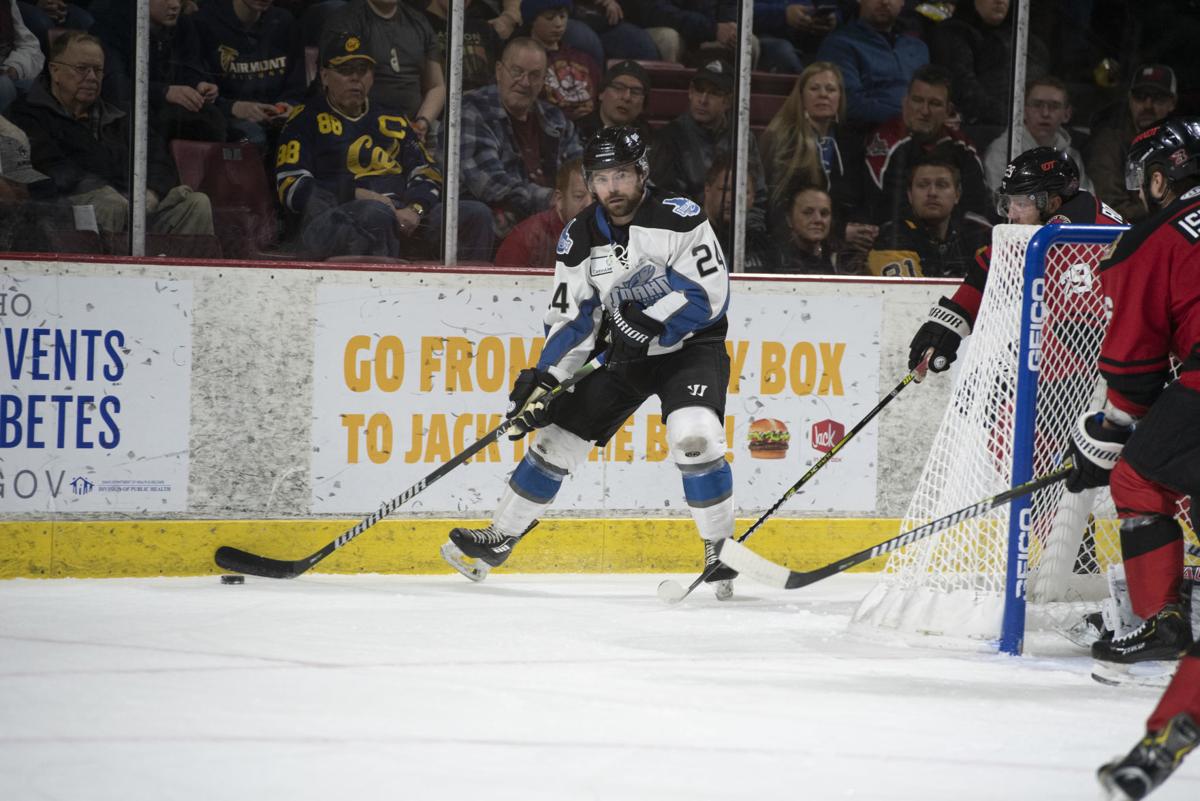 Idaho Steelheads forward Jefferson Dahl carries the puck during a game against the Rapid City Rush on Friday at CenturyLink Arena. 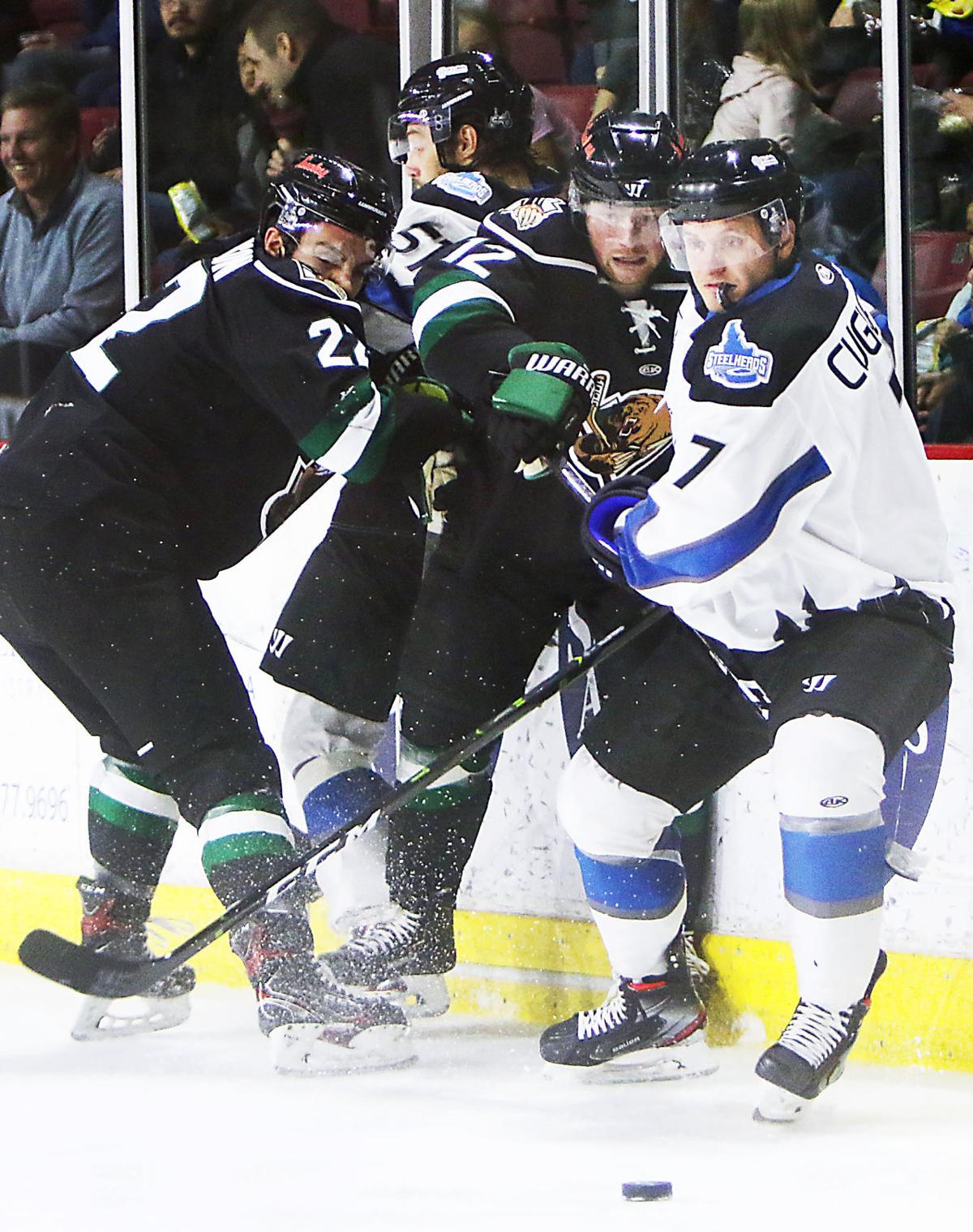 Idaho forward Diego Cuglietta (7) and Utah’s Ryan Wagner(12) clash against the wall as the Steeleheads faced the Grizzlies Wednesday at CenturyLink Arena.

Former Idaho Steelheads’ forward Jefferson Dahl broadcasts from the bench as the Steelheads face the Utah Grizzlies on Wednesday.

Idaho Steelheads forward Jefferson Dahl carries the puck during a game against the Rapid City Rush on Friday at CenturyLink Arena.

Idaho forward Diego Cuglietta (7) and Utah’s Ryan Wagner(12) clash against the wall as the Steeleheads faced the Grizzlies Wednesday at CenturyLink Arena.

BOISE — After retiring from professional hockey two years ago, Jefferson Dahl was content with watching his former team from the stands at CenturyLink Arena.

But when the injury bug hit the Idaho Steelheads last week, the team was able to convince its former captain to temporarily come out of retirement and play in two big games against Rapid City.

With several players coming down from the AHL Texas Stars, the Steelheads waived Dahl on Tuesday, but his time around the team wasn’t quite finished. Dahl was on the team’s radio broadcast on Wednesday during Idaho’s 4-3 shootout victory against the Utah Grizzlies. He stood between the two benches while serving as an analyst during the radio broadcast on KTIK 1350 AM.

“I’m the kind of guy who likes to try everything,” Dahl said. “When an opportunity presents itself, I want to jump on it. I was talking to (former Steelhead) Marty Flichel, who does it a couple times a year, and he mentioned how he has fun doing it.”

Dahl had been a fan favorite during his four seasons with the Steelheads. He joined the team midway through the 2014-15 season — his first professional season out of the University of Wisconsin — after starting the season in Germany. The 210 points he scored for the Steelheads ranks second all-time for the team during the ECHL era.

In his final two seasons with the Steelheads, Dahl served as team captain, retiring following the 2017-18 season. He remained in Boise after his retirement and was a presence around the rink, particularly last season while his younger brother, Alexander, was still playing.

With the team short forwards before Friday’s game against Rapid City, Idaho coach Everett Sheen called up the 30-year-old Dahl to see if he would be interested in skating a couple games with the team.

“We lost a forward in morning skate and we were down to nine,” Sheen said. “We didn’t want to run nine and six (defensemen) for two big games, and Jefferson had been around the rink a few times saying hi. So I called him ‘hey, you got your stuff, want to come play a couple games and be the 10th forward?’”

Dahl played in the Friday and Saturday night games against Rapid City, both Idaho victories. In Friday’s 3-2 shootout win, he was in the starting lineup. He had a shot in both games, and had a few opportunities to put the puck in the net, but didn’t record a point.

That didn’t matter to Dahl, who was just thrilled to lace up the skates one more time as a professional hockey player.

“It felt like old times,” Dahl said. “It’s always great to be back in this arena. It’s one of the better places to be in this league, so to be back in front of all these home fans felt really good.”

The Steelheads were sent forwards Diego Cuglietta and Anthony Nellis from the AHL Texas Stars before Wednesday’s game against Utah, so Dahl wasn’t needed on the ice. But Collin Schuck, the team’s Director of Broadcasting and Media/Community Relations, had another use for him. Schuck, who does play-by-play on the radio broadcast, has a rotating cast of analysts who join him. But he was struggling to find one available for Wednesday’s game.

With Dahl suddenly becoming free, Schuck inquired about his interest in being between the two teams’ benches during the game. Dahl said this was his first time being on a broadcast since doing a high school game while he was in college.

“I’ve always been intrigued and always looked up to guys who have done it,” Dahl said. “You see guys on TV, and Collin and (former Steelhead broadcaster) Brian (McCormack) before him. It brings a whole different element to watching the game.”

From his new spot, Dahl watched as Utah tied the game with an extra skater with 1:31 left in regulation and Idaho fail to convert on a 4-on-3 power play in overtime before winning the shootout 2-0.

Brett Supinski, Will Merchant and Colby McAuley all scored in regulation, while Supinski and A.J. White scored in the shootout round. Idaho goaltender Colton Point stopped 35 of 38 shots and two more in the shootout as the Steelheads won their sixth home game in a row and seventh of the last eight overall.

“It got a little tough, but credit to Utah, they’re an outstanding team, they’re very offensively dynamic,” Sheen said. “They pulled the goalie, got the extra attacker and they converted on it. They’re very dangerous, but for us to stay focused, stay driven, we dominated in overtime. So I liked their effort.”

Dahl’s stint on the ice might have been short-lived this time around, but the Steelhead legend was happy just to get another shot at the game he left behind two years ago. His mark is already left on the team, as current captain, White, said a lot of his leadership style was crafted by watching Dahl. White and Dahl played together during the 2017-18 season.

“He wasn’t overall a big talker, but when he talked, everyone listened,” White said. “The way he led on the ice, he was always trying to be the hardest worker and best player out there and that’s something I took and learned closely watching him. You don’t have to talk a lot to be the leader on the team, and he was definitely that for us.”

As for Dahl, if the Steelheads ever need his services again, he said he’d be willing to jump in.

“In this league, there’s a lot of transition, especially with Texas and everything like that,” Dahl said. “It can kind of change on a day-to-day basis. If they need help ever again, I’m happy to fill in whenever I can.”