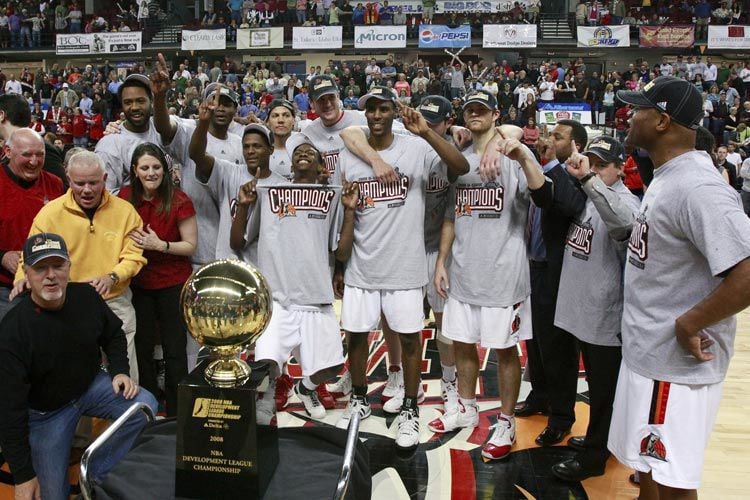 The Idaho Stampede celebrate after winning the NBA D-League title on April 25, 2008, in Boise. 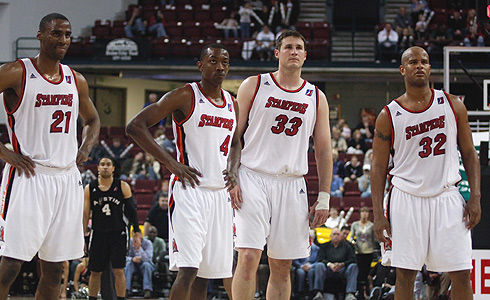 From left, Jason Ellis, Mike Taylor, Cory Violette and Randy Livingston stand on the court during a break late in Game 2 of the NBA D-League Championship series against the Austin Toros on April 24, 2008, in Boise.

The Idaho Stampede celebrate after winning the NBA D-League title on April 25, 2008, in Boise.

From left, Jason Ellis, Mike Taylor, Cory Violette and Randy Livingston stand on the court during a break late in Game 2 of the NBA D-League Championship series against the Austin Toros on April 24, 2008, in Boise.

The former managing investor of the team drove down to Salt Lake City to rescue the trophy after discovering the Utah Jazz — who bought the team in 2015 and moved it to become the Salt Lake City Stars the following year — had been keeping it in a closet, along with the division title trophy from that year.

“Much to my chagrin, there was no legacy with the Stampede,” Ilett said. “They just talked about the Salt Lake City Stars. So I called them up and said ‘you’re not using the trophy, there’s still some things we carry on with our foundation that’s still going.’ They kind of blew me off, so I wrote a letter to (Jazz owner) Mrs. (Gail) Miller, Larry Miller’s widow, and explained it to her. About a week later they called back and said ‘where can we send the trophies?’ I said ‘don’t bother, I’ll come down and get them.’”

It’s fitting the championship trophy resides in Boise. The 2007-08 Stampede team was one built upon local connections.

Led by coach Bryan Gates, himself a Boise State graduate, the Stampede featured two former Boise State players on the roster in Roberto Bergersen and Jason Ellis as well as Bishop Kelly graduate Cory Violette. Even captain Randy Livingston, who grew up in New Orleans, had come to think of Boise as a second home after several stints in his career with the Stampede.

“There were a lot of guys that came from all over the place, but to have so many guys with ties to the state and the city, I think that made it really special,” said Ellis. “I think that might have been able to get us more fans than we normally had.”

Gates said his focus wasn’t getting local players, but rather on winning games. It just so happened that so many stars on the team had local connections. There was a rule in the D-League that allowed teams to sign players that might help them on the marketing side, but Bergersen, Ellis, Violette and Livingston each started all three games of the championship series against the Austin Toros.

For Livingston, the championship season was the swan song of his playing career. At 33 years old, the point guard had started looking into a career in coaching. The 1993 Naismith High School Player of the Year had spent parts of 11 seasons with nine NBA teams.

He hadn’t played more than 20 games in a season in the NBA since playing 79 with the Phoenix Suns in 1999-2000, but he kept telling himself that as long as he was being called up to the league and making enough money, he would continue playing the game. In between the call ups Livingston had several stints with the Stampede and started growing fond of the area.

“I like the Treasure Valley, I’m a southern boy who grew up in New Orleans,” said Livingston. “There’s no mountains, there’s no hills, no outdoor life. … For me it was like two different worlds. I could come to Boise, have a great time, feel safe, it really took me under it’s wing. Then I came back to New Orleans and got something totally different in the offseason, which was fine to me. It was a place that groomed me and took care of me. It gave me an opportunity to fulfill my dreams, I couldn’t ask for anything better.”

Livingston’s final NBA call up came late in the 2006-07 season to the Seattle SuperSonics, forcing him to miss the Stampede’s playoff run that season despite being the D-League MVP. Midway though the following season, he got an opportunity to sign with a team in Spain, but around the same time he suffered a shoulder injury, which turned out to be a torn rotator cuff.

“At that point, I said this is probably it,” Livingston said. “I could have probably played through it and took the contract and done a money grab to go to Spain, but I decided not to. I was all in at the end to win a championship and try to go out on a good note.”

Livingston finished the season averaging 16.5 points per game, tops among players who played over 200 minutes for the team that year. With his coaching career in front of him — one that included a stint with the Stampede form 2010-12 — he was like a coach on the floor for the team.

“He’s absolutely in the top three, if not one of my favorite teammates I’ve ever played with,” said Bergersen. “I owe a lot of my production in my career to him. I learned more about basketball than I ever knew from him. He’s also one of my best friends, we still talk all the time. Being able to play with him and being able to do that was just phenomenal.”

Bergersen, who had been a second round NBA Draft pick by the Atlanta Hawks out of Boise State in 1999, also served several stints with the Stampede. Following a couple of seasons playing overseas, he returned prior to the 2007-08 season. Feeling like he was at the peak of his playing career, Bergersen wanted to take another shot at the NBA, and the D-League was his best avenue.

“I was like ‘I’m not going to go to Europe, I’m going to sacrifice that paycheck to see if I can really, really, have a good shot,’ while I was still young,” Bergersen said. “When you’re a free agent guy trying to work yourself in the NBA, you’re definitely fighting that age barrier and you want to try your best to make it happen while you are young and spry. And if I was going to be on a minor league team, it was a no brainier that I would be with the Idaho Stampede.”

Bergersen didn’t make it to the NBA, but instead spent the rest of his playing career in Idaho, retiring following the 2009-10 season. But both he and Livingston had their numbers retired by the team. Their jerseys still hang on the wall at CenturyLink Arena, along with the championship banner.

The second Boise State alum, Ellis, joined the team as a sixth-round D-League draft pick prior to the season. Ellis, who had graduated from Boise State in 2005, spent his first two professional seasons in Switzerland. Ellis was a player Gates had his eye on, so when he was still available in the sixth round, the coach took the power forward.

“That was the only place I wanted to play,” Ellis said. “It’s where my family was and I wouldn’t have played anywhere else. I’m definitely glad that Coach Gates took a chance on me and I was able to stay home.”

As a post player, he started getting more minutes toward the end of the season, as two of Idaho’s big men got called up to the NBA. Mouhamed Sene, the 2006 10th overall NBA Draft pick, was called back up to Seattle, while Lance Allred signed with the Cleveland Cavaliers. Sene was named the D-League’s Co-Defensive Player of the Year following the season, while Allred was named a second-team All-D-League player. Before they went to the NBA, Ellis was buried on the bench.

“Jason Ellis was our fifth big, so there wasn’t much room for Jason,” Gates said. “There were a couple trips where I don’t think Jason even went on.”

Ellis averaged just 5.4 points per game and 5.1 rebounds during the regular season, but starting in all four playoff games he averaged 11.3 points and 12 rebounds.

Helping him in the post was Violette, who, following his Bishop Kelly career, went to Gonzaga before spending three years in Europe. Entering his fourth professional season, Violette had some offers to stay in Europe, but didn’t like any of them. Like Ellis, he decided to try the D-League to see if he could get a shot at the NBA. After talking with Gates, Violette joined his hometown team at an open tryout, which helped lead to a roster spot.

The signing paid off in the championship-clinching game, as Violette came to Gates with a plan that proved to be pivotal. The Toros had made adjustments in the best-of-three series to put a bigger defender on Livingston at the point. Minutes before Game 3, Violette brought up the idea of a 1-2 pick and roll, something the team hadn’t done all year, to get the ball to Violette in the post.

“We just started to exploit things that we saw,” Violette said. “We would just work with each other to do that. I don’t know if maybe I felt like there was just an opportunity there, but we talked to each other and were open about how we were going to accomplish something.”

But the star of that game was Mike Taylor, a rookie out of Iowa State. He came off the bench to score 27 points behind seven 3-pointers. Four of those 3-pointers came in the first four minutes of the fourth quarter.

After being dismissed from Iowa State, Taylor signed with the Stampede in the preseason following an injury to Jamaal Tatum. Tatum recovered, and Taylor was cut. But when the injury returned, Tatum was waived again, bringing Taylor back into the fold.

Rookie Brent Petway, out of Michigan, also played in key roles for the team throughout the season. Idaho also added a pair of key additions toward the end of the season, as rookies Josh McRoberts and Luke Jackson were sent down from Portland and Miami, respectively.

“Luke finished games because we had Brent Petway starting,” Gates said. “Luke was the 10th player picked in the NBA Draft that year, he was just so skilled. He could do anything he wanted. And Josh the same thing, a very talented player. He loved to pass. We would run multiple stops, and Randy would draw two people, Cory Violette would draw two people, and the first pass would go to Josh, who would find the open guy.”

The team set a D-League record with 36 wins, including an 18-game winning streak that went from December through February. They beat the Los Angeles D-Fenders, 97-90, in a one-game semifinal and after dropping the first game of the Championship Series in Austin, won Games 2 and 3 back in Boise to clinch the franchise’s only title.

“To us we knew there was no doubt in our minds,” Bergersen said about having to win two elimination games at home. “We knew we’d have to work and they were good. They had some really young talented point guards and some young and really talented wings who were long and gave us a bit of issues. We knew they were good, but when we got a chance to go back home, there was no doubt in our minds we were going to win.”