Kuna’s Michael Mitchell holds up three fingers, signifying his third state wrestling title, after winning the 4A 120-pound title on Feb. 29 at the Ford Idaho Center in Nampa. 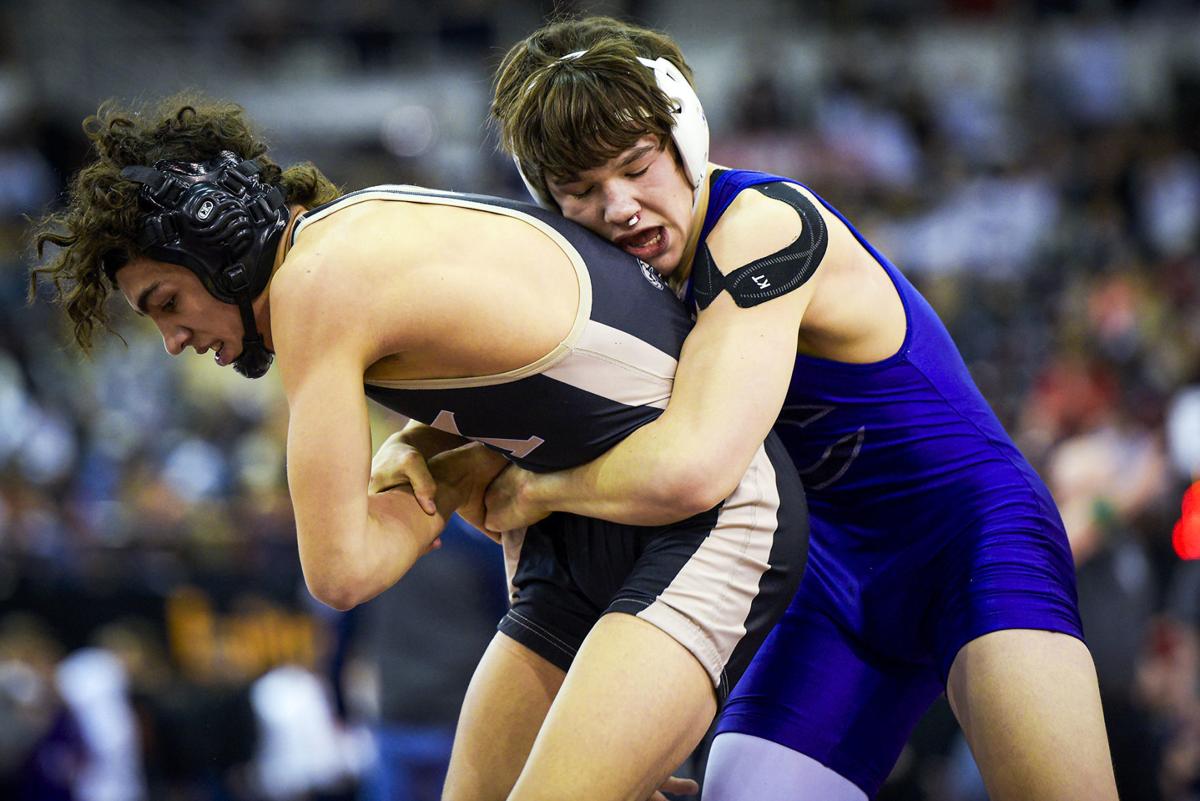 Dante Roggio of Kuna, left, tries to escape from Century’s Canyon Mansfield, right, during their 4A 138-pound championship wrestling match Feb. 29, 2020, at the Ford Idaho Center in Nampa. 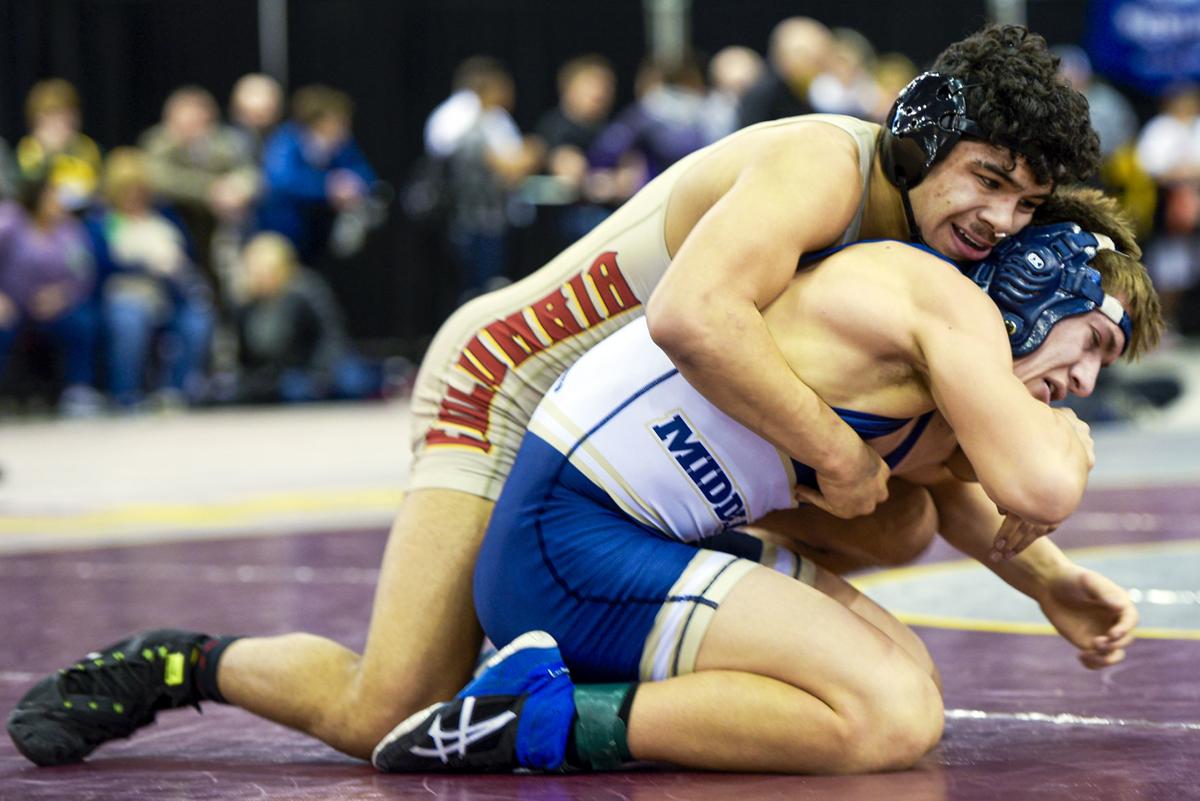 Columbia’s Angel Rios, swings around Middleton’s Kyle Austin during their 4A 152-pound final Saturday, Feb. 29, 2020 at the Ford Idaho Center in Nampa.

Kuna’s Michael Mitchell holds up three fingers, signifying his third state wrestling title, after winning the 4A 120-pound title on Feb. 29 at the Ford Idaho Center in Nampa.

Dante Roggio of Kuna, left, tries to escape from Century’s Canyon Mansfield, right, during their 4A 138-pound championship wrestling match Feb. 29, 2020, at the Ford Idaho Center in Nampa.

Columbia’s Angel Rios, swings around Middleton’s Kyle Austin during their 4A 152-pound final Saturday, Feb. 29, 2020 at the Ford Idaho Center in Nampa.

NAMPA — Kuna was already one of the most storied wrestling programs in Idaho with four state championships.

But the Kavemen still made more history at the Idaho state wrestling championships Saturday evening at the Ford Idaho Center.

“I couldn’t be more proud of our guys to cap off an amazing season like this and do something we haven’t done before,” Kuna coach Pat Owens said. “I couldn’t be happier.”

Mitchell got it going.

The junior earned an 8-2 decision over Nampa’s Nikko Gonzalez to win his third consecutive state championship. He let that be known by throwing up three fingers in celebration.

Mitchell, who had won at 5A 106 and 4A 113 the previous two years, is now just one title away from becoming Idaho’s 30th and Kuna’s second four-time state champion. He would join Michael Cook (2011-14) if he wins another one next year.

“It’s crazy to think about,” Mitchell said. “I always looked up to those guys. I always thought they were superheroes in the wrestling world. Now it’s insane that I could possibly do the same thing.”

Roggio was up next.

The junior walked away with a 4-2 decision against Canyon Mansfield of Century. It was his first state title after losing in the finals in each of the last two years, including a heartbreaking one-point loss last season.

“I can’t even tell you how good this feels right now,” Roggio said. “I finally got over the hump, so I feel like I can breathe again.”

And last but certainly not least was Preston Owens.

The junior capped the Kavemen’s trio of champions with a 9-3 decision over Preston’s David Seamons. It was his first state title as well. Owens lost by two points in the finals as a freshman before having to settle for third last season. He was on top of the podium with his father handing him the first-place medal this time around.

“It still hasn’t sunk in I think,” Preston Owens said. “With all the hard work I’ve put in and how close I was before, it feels so satisfying.”

Kuna also had six other placers.

Heavyweight Gavin Heindel was second. Anderson White (106), Anieas Rivera (120) and John Kallmeyer (145) all took third. Matthew Allison (138) and Cael Palmer (152) were both fifth to help the Kavemen win the fifth title in program history — the most ever in the 4A classification.

But that feat was somewhat in doubt after Friday. They sat in second place with 98 points — five points behind Century and just 1.5 up on Southern Idaho Conference rival Columbia.

Kuna turned it on Saturday, though. It took back the lead after the semifinal round and never gave it back up. The Kavemen led by as much as 26.5 points

“It was great to see them respond after that because that hadn’t happened all year,” Pat Owens said. “I went to bed and wasn’t feeling really good. But it’s good to see them be tested and bounce back.”

They finished 20-2 in duals with their only losses coming at the Wasatch Intermountain Duals in Heber City, Utah. They got beat by Wasatch and Payson, who are both defending state champions in Utah.

They won tournaments like the Calhoun Classic, Tiger-Grizz, Red Halverson and the first Rollie Lane title in program history — beating Post Falls, which won the 5A state title for the third year in a row.

“I mean last year we were good too, but this year everyone was a little more connected,” Mitchell said. “Everyone was more in sync with everyone else’s matches. It’s been a really fun year.”

It moves up to 5A and its never won one at that level before.