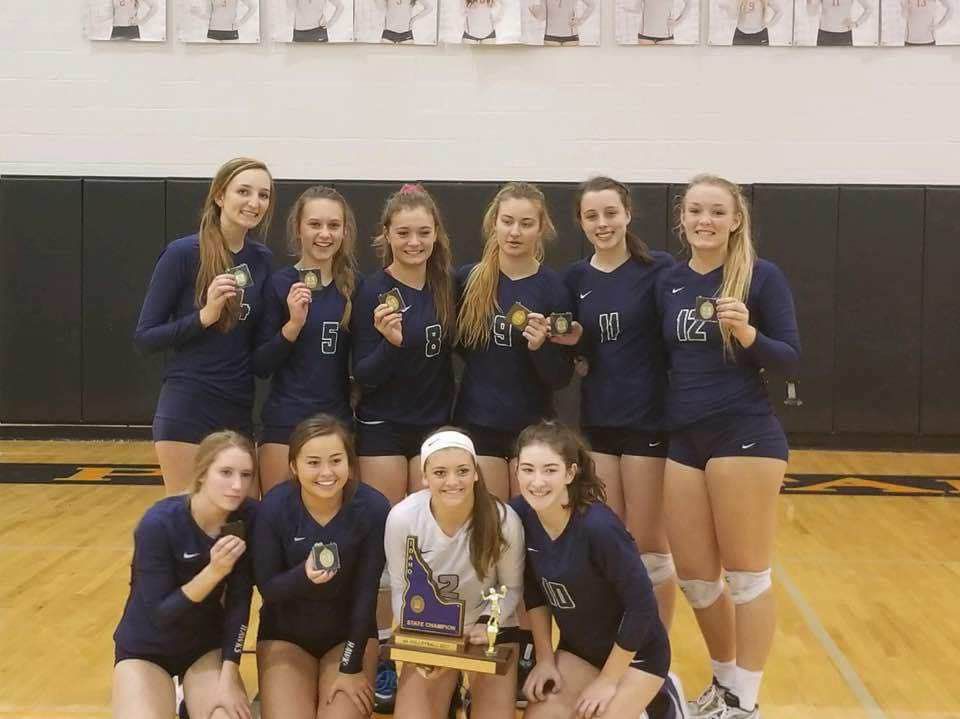 The Skyview volleyball team celebrates its second straight state championship by posing for a picture with the trophy following its win over Twin Falls Saturday. 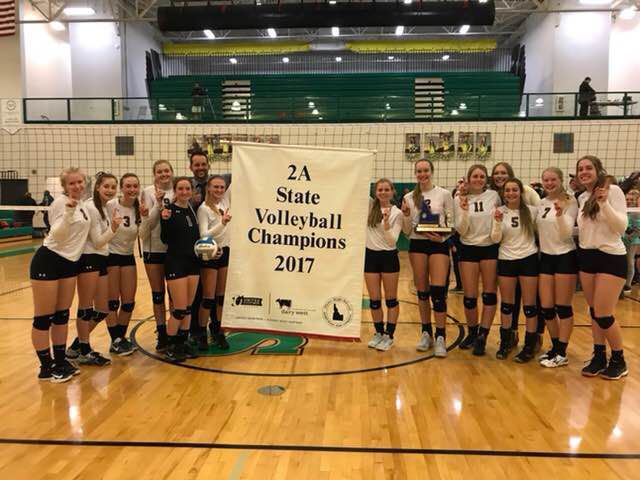 The Nampa Christian volleyball team poses with its state banner and trophy.

The Skyview volleyball team celebrates its second straight state championship by posing for a picture with the trophy following its win over Twin Falls Saturday.

The Nampa Christian volleyball team poses with its state banner and trophy.

After going 13 seasons without a state championship trophy, the Skyview volleyball coach suddenly has two in as many years.

“So many years we’ve been on the other end where we’re going home disappointed, so it feels great. I could get use to this feeling,” Murphy said. “I can’t pretend like I’ve done this every year. I’ve been coaching for a long time and there have been plenty of bus rides back feeling pretty depressed and down. So it’s definitely a lot more fun going this route. I’m going to appreciate this and I’m not going to take it for granted.”

Senior outside hitter Dani Nay had a game-high 16 kills to go along with eight digs and a pair of blocks. Sophomore setter Whitney Bower added 10 kills, 18 assists and 11 digs.

The win capped off a remarkable season for the Hawks (40-3). They won their seventh straight 4A District III title, didn’t drop a set in any of their wins and didn’t lose to a team from Idaho.

Skyview’s only three losses of the season came at the invitation-only Durango Fall Classic in Las Vegas, Nevada in September. The Hawks lost to three of the top ranked teams in the state of California and in the entire nation.

“A lot of us have been playing together for a really long time,” Nay said. “So the team chemistry is off the charts and that’s a big thing. The girls on the team all want to win for each other so it’s never anyone playing selfishly or anything like that.”

Unlike last year when Skyview won a five-set thriller over Idaho Falls for the first title in program history, Saturday’s championship match wasn’t as dramatic.

The Hawks were really only tested in the opening set. The Bruins scored the game’s first point and started the game with an early 6-2 lead.

Twin Falls again led in the middle of the set at 15-14, but it was short lived. Skyview took 10 out of the last 15 points for the first set win.

They led by as much as 11 in both the second and third sets.

“We knew Twin Falls was going to be a tough game because they wanted to win it just as bad as we did,” Nay said. “But after we won that first set it was just one set closer to our goal. Everyone wanted to win it so bad that there was no way any of us were going to lose.”

The multiple state championships could only just be the beginning for Skyview.

The Hawks are only losing three seniors in Nay, middle hitter Olivia Bradley and defensive specialist Hana Naito. Everyone else is set to return.

But Murphy isn’t even thinking about that right now.

The senior middle hitter delivered Nampa Christian the ninth title in program history with one of her patented spikes. The Trojans beat Malad in four sets 25-17, 25-22, 24-26, 25-19 to walk away with their second straight 2A state championship at Lakeland High in Rathdrum.

“It’s awesome. Our kids worked so hard this year,” Johnson said. “There was definitely more pressure this year because they felt like they had the target on their backs after winning it last year. But they were more than up for the challenge and I couldn’t be prouder.”

The win capped off a perfect season for Nampa Christian. The Trojans finished with an impeccable 30-0 record. Along with the flawless record, they won their seventh consecutive 2A District III championship and extended a 2A Western Idaho Conference winning streak to 47 wins.

It’s a streak that goes back four and a half years.

“That’s pretty special,” Johnson said. “People stepped up this year and took on bigger roles on the team than in years past. We were a better team this year than we were last year, no doubt. The kids will all say the same thing.”

Nampa Christian controlled the first two sets with relative ease but ran into a bit of a roadblock in the third. The Dragons led most of the way and became just the third team in the tournament to take a set off the Trojans.

But according to Johnson it was a good thing.

“We got a little complacent but that was OK,” Johnson said. “It was almost a blessing in disguise because then they came out and throttled them.

“The seniors told me afterwards they weren’t ready to be done yet and wanted to play another set anyway. So they had a really good demeanor about the whole thing.”

Nampa Christian turned around and cruised in the fourth. They never trailed and Yett put the finishing touches on her Trojan career with a kill that probably left a bruise on the opposing Malad player’s hands.

It’s a career that spanned four years with three 2A WIC Player of the Year awards and a pair of state titles. A knee injury caused Yett to miss a few games for the first time in her career. It also caused her numbers to take a bit of a dip.

But the Utah commit returned at the state tournament to show everyone she hadn’t lost a step.

“Megan showed up. She finally played some good volleyball,” Johnson said. “She brought it and it was cool.

“She had the final kill which was perfect. After the match I just told her thank you for everything. She’s been fun to watch. There’s been no one else that I’ve seen that’s played quite like that.”

The Vikings finished fourth after losing to Burley in straight sets. Middleton was defeated 22-25, 17-25, 22-25 in the consolation round of the 4A State Volleyball Tournament at Post Falls High.

Brynn McKnight tallied eight kills in the loss for the Vikings.

On Friday Middleton lost its first round game to Twin Falls in straight sets. But the Vikings came back to beat Preston and Century in straights sets in the consolation rounds to qualify for state hardware.

McKnight had a total of 33 kills, while Macy Short netted 19 during those three games. Lindsay Maderis added seven blocks and Davis chipped in with 75 assists.