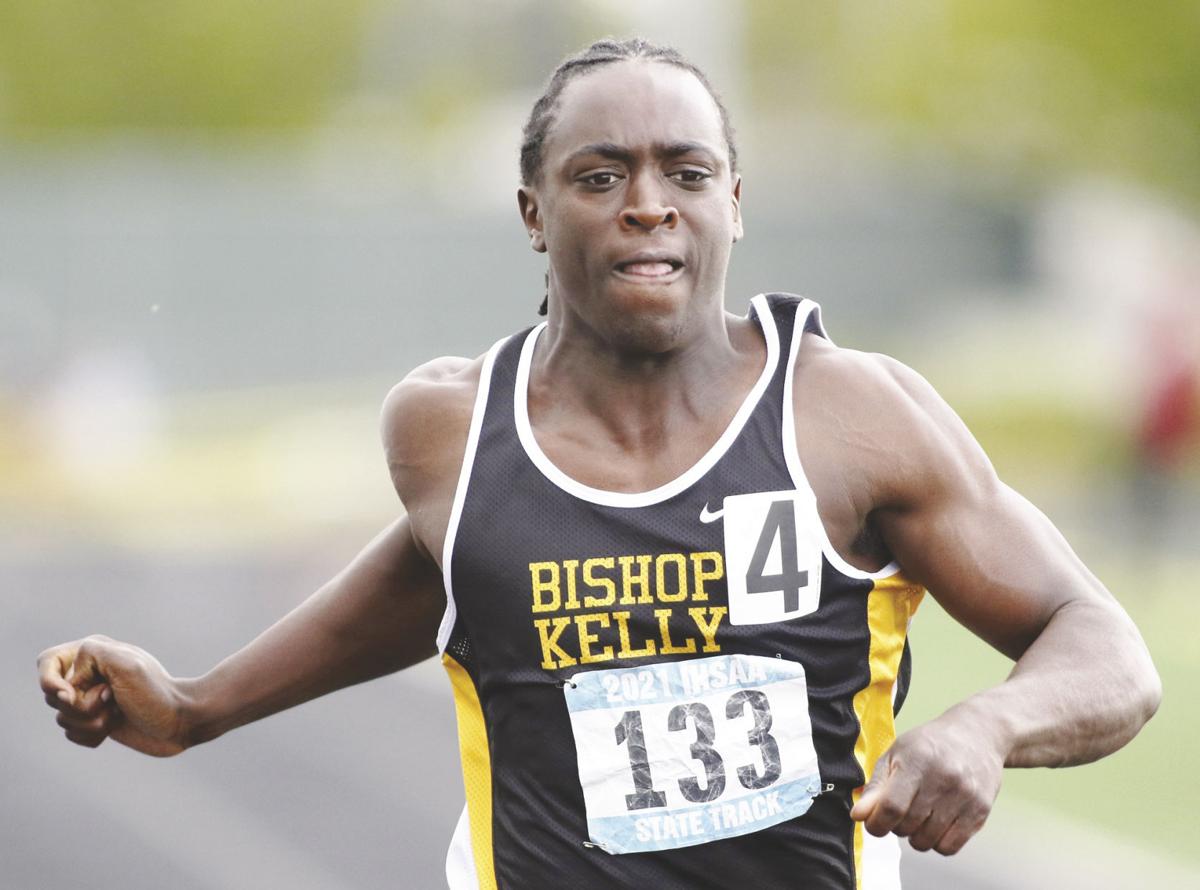 Bishop Kelly's James Onanubosi drives to a first place finish in the boys 4A 100 meter dash during State track and field finals on Saturday. 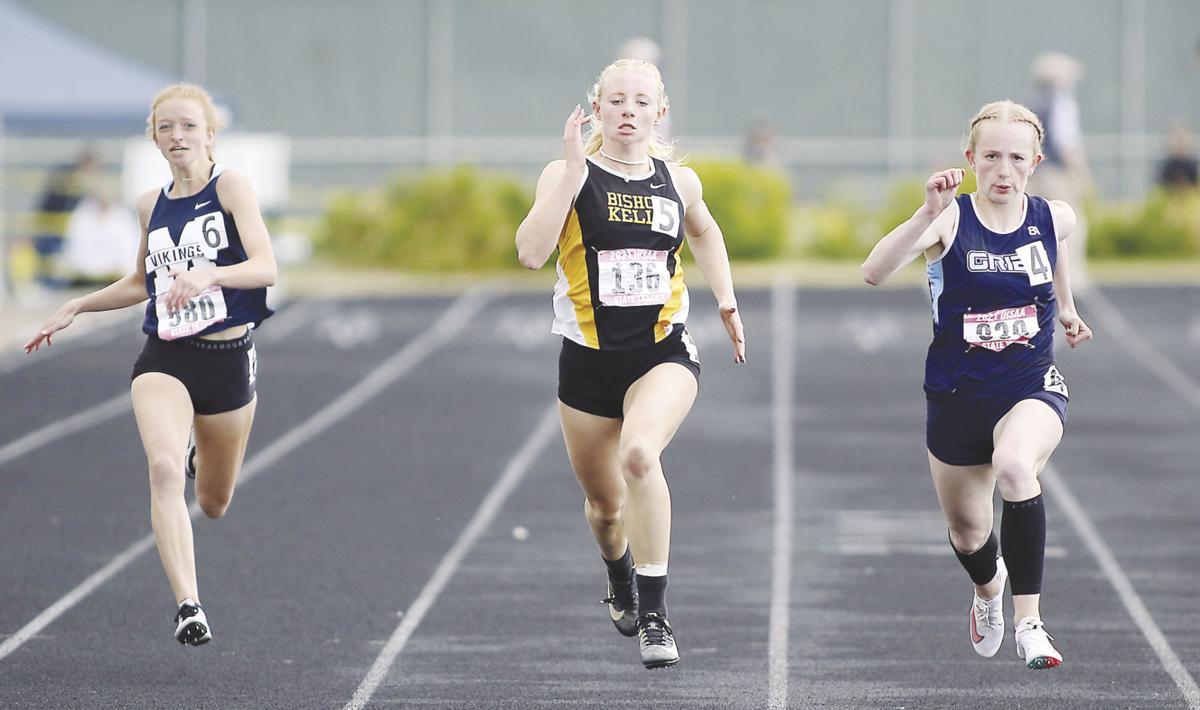 Bishop Kelly's Paige Tekippe sprints to a second place finish in the girls 4A 100 meter dash during State track and field finals Saturday. 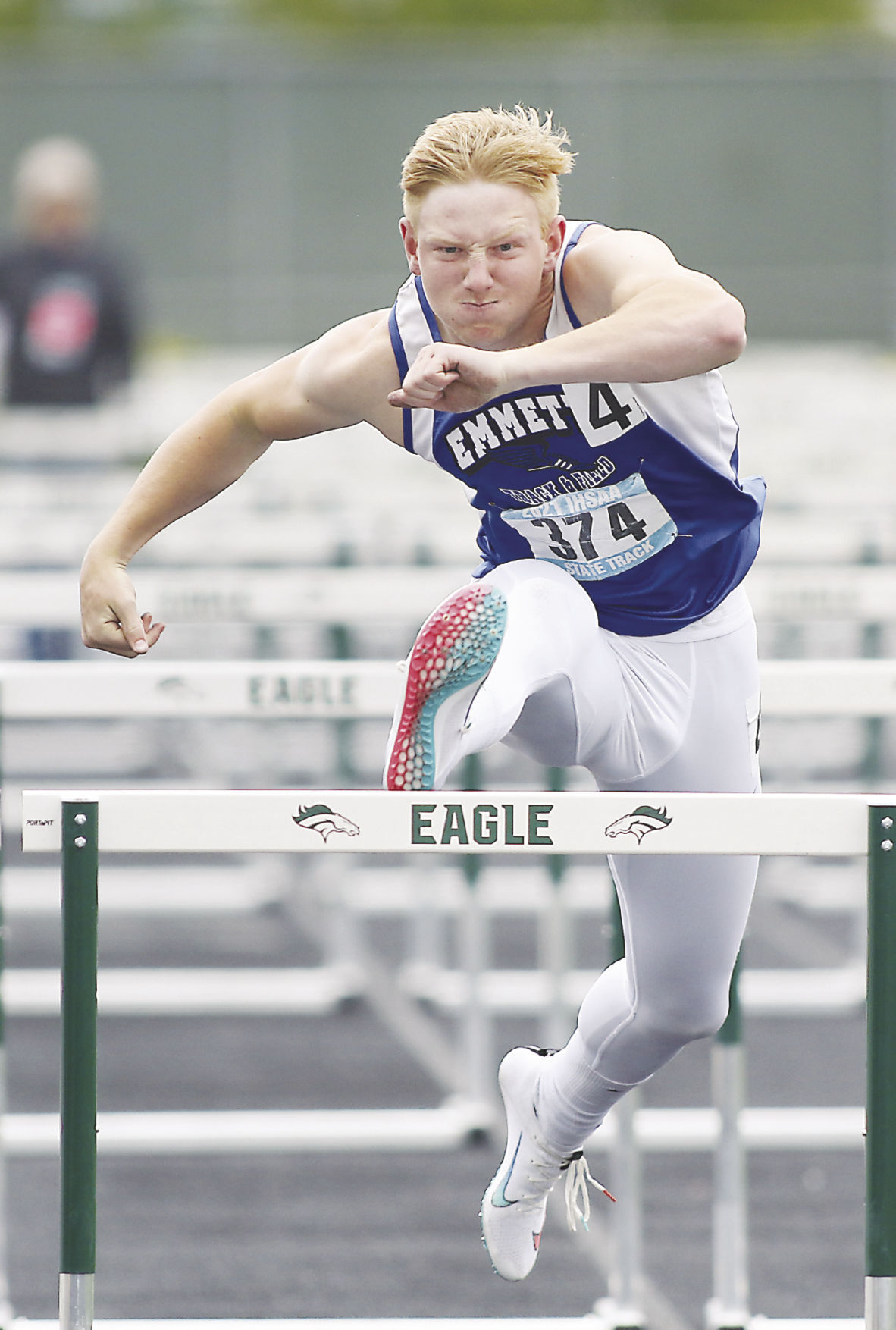 Bishop Kelly's James Onanubosi drives to a first place finish in the boys 4A 100 meter dash during State track and field finals on Saturday.

Bishop Kelly's Paige Tekippe sprints to a second place finish in the girls 4A 100 meter dash during State track and field finals Saturday.

EAGLE — The Bishop Kelly boys track and field team had to wait two years for redemption.

On Saturday the Knights made sure there was no question who was on top.

The Knights returned to the top of the 4A standings on Saturday, finishing with 97 points, 42 ahead of second-place Pocatello. In 2019, Bishop Kelly lost out to Skyline by two points, ending a three-year championship streak.

The Knights were unable to recapture the crown last year with the COVID-19 pandemic canceling the season.

“It motivated us every day,” said junior James Onanubosi, who won a title in the 100 meters and ran the anchor leg on the championship 4x100 relay team. “We lost by two points and every day we kept thinking about that. Especially in practice, it made us train harder knowing how close we were to that state championship.”

Bishop Kelly was able to complete the 4A sweep as the girls team also took home its sixth straight state title, soring 103 points to beat Skyline by 21.

“It always feels good,” Bishop Kelly coach Jeff Carpenter said about taking home two state championship trophies. “We put a lot of work in, day in and day out, when the season starts. I just couldn’t be more proud of the kids, battling in every event.”

Bishop Kelly’s girls team took home just one event win Saturday, with the Knights 4x200 team winning the title with a time of 1 minute, 44.67 seconds. But the Knights were lifted by a pair of titles earlier in the week from senior Paige Tekippe in the triple jump on Thursday and long jump on Friday. Tekippe tired to add to that total on Saturday, but came away with a third-place finish in the 100 and a second-place finish in the 200.

With her effort, Tekippe scored 34 points for the Knights on the weekend.

“It’s just incredible, it’s my last meet of my senior year and I wanted to go out there and do everything I could for the team,” said Tekippe. “It’s a great feeling, definitely a great accomplishment I’ll remember for the rest of my life.”

“I’ve been working for it forever,” said Onanubosi, who would have also set a classification record in the 200 with a time of 21.70 if not for Jerome’s Taeo Schneider running a 21.50 to take first place. “I knew I could get there, it was just a matter of executing and that’s what I did.”

It was certainly an up and down weekend for Emmett junior Landon Helms. On Friday morning he repeated as pole vault champion, but was unable to break his own classification record. Friday afternoon he tripped over the final hurdle of the 300 hurdle preliminaries, failing to qualify for the finals.

On Saturday, he came back and won the 110 hurdles with a time of 14.89. Helms trailed much of the race, but overcame Middleton’s Mason Nichols around the final hurdle to claim the title.

Boise girls run away with team title, win by 106 points

“I didn’t have the best start, and Mason Nichols, he ran one heck of a race,” said Helms. “I knew he had a really fast start and he’s always beat me to the first two hurdles. Today I think he beat me to more than half the hurdles.

“I just knew I had to run my race and if I just focused on my technique and coming down fast over the hurdles, that I’d eventually catch him."

OTHER LOCAL WINNERS: Nichols won the state title for Middleton in the boys 300 hurdles, winning with a time of 40.11. Middleton’s girls won the 4x400 relay with a time of 4:04.54. … Emmett’s Lacy Yates, who won the discus on Friday, won her second title of the weekend, taking the shot put with a throw of 38 feet, 11 inches. Yates beat Jacoba Luteyn by a single inch after beating Luteyn by two inches in the discus. … Emmett’s Tatum Richards set a girls pole vault overall state tournament record with a height of 12-8.

The Melba girls captured the State 2A track and field championship at Middleton High and the Melba boys took second.

The Mustang girls finished with 89 points, 26 ahead of runner-up Aberdeen.

Fruitland's boys were the highest-finishing area team at seventh and the Fruitland girls were fifth, one spot out of a trophy.

Carter Woodland of Notus won a state title in the triple jump with a leap of 42 feet, 3 inches.