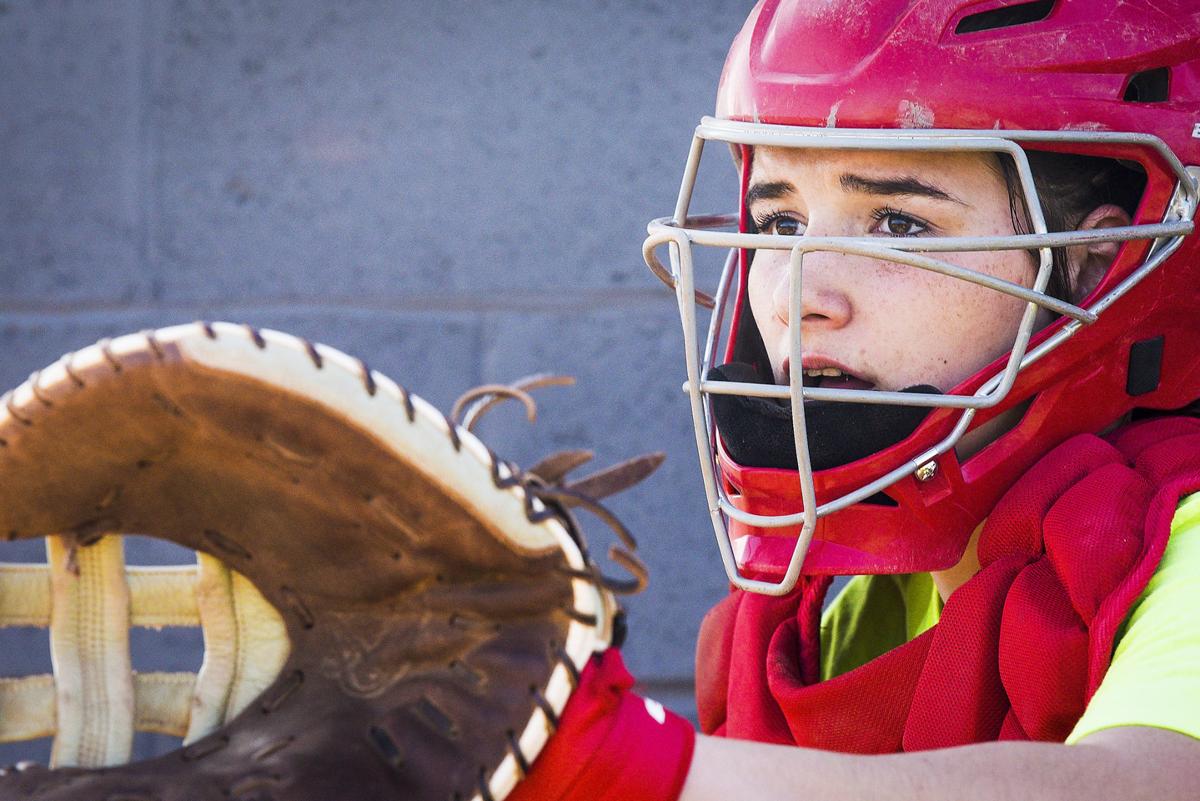 Erika Tyree holds her glove up to catch a pitch during softball practice on Wednesday, March 11, 2020 at Weiser High School in Weiser. 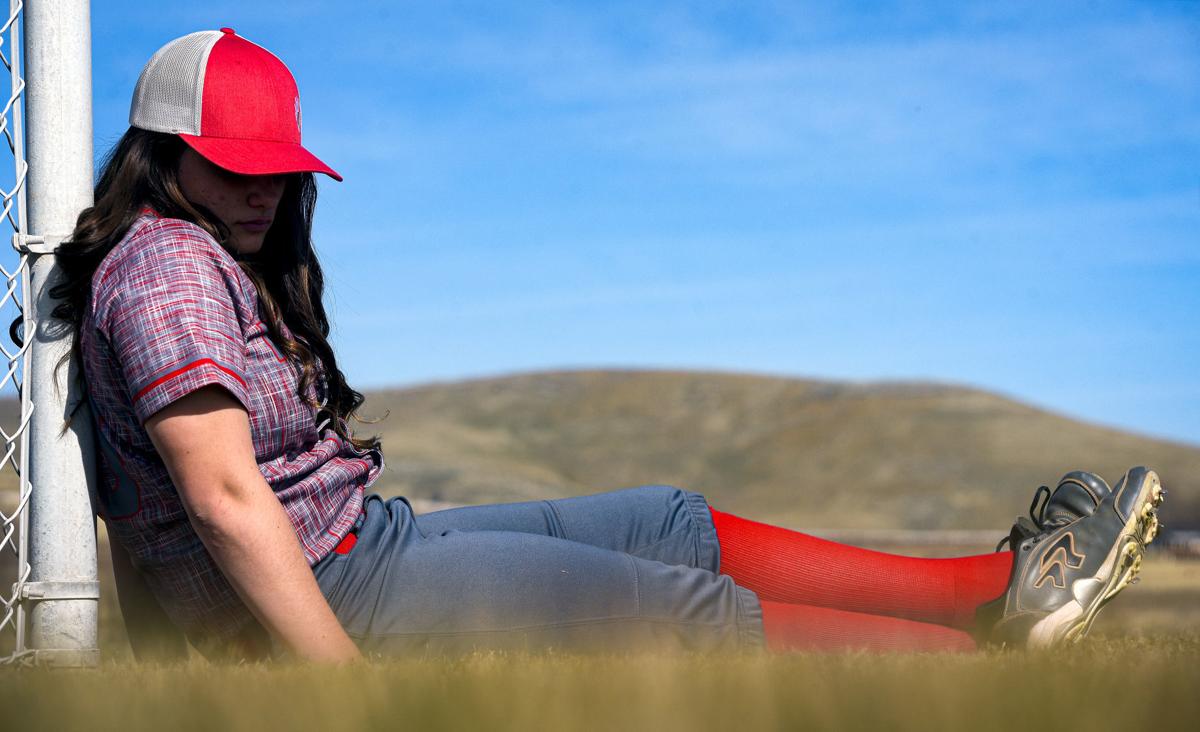 Erika Tyree has a past that few if anyone would want to remember. But the Weiser High School senior catches proudly wears it on her sleeve and has used it to help turn her life around. 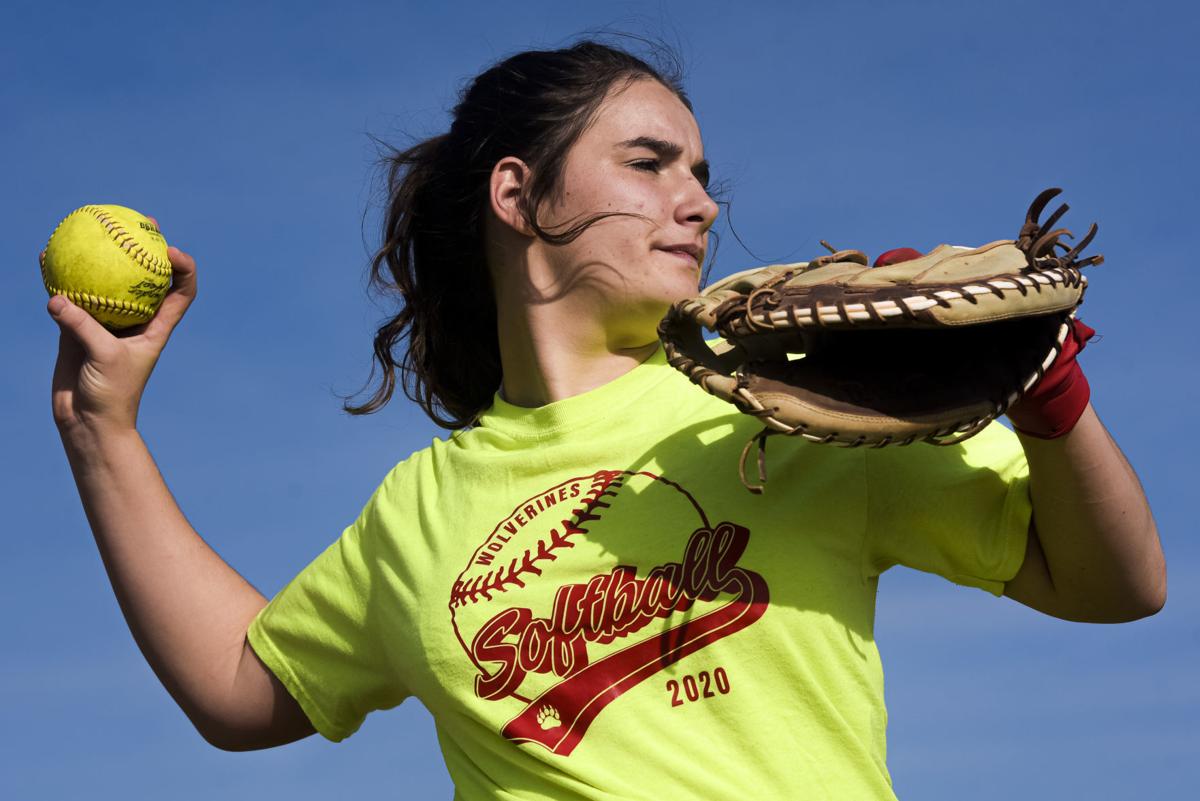 Erika Tyree throws the ball to a teammate during practice on Wednesday, March 11, 2020 at Weiser High School in Weiser. 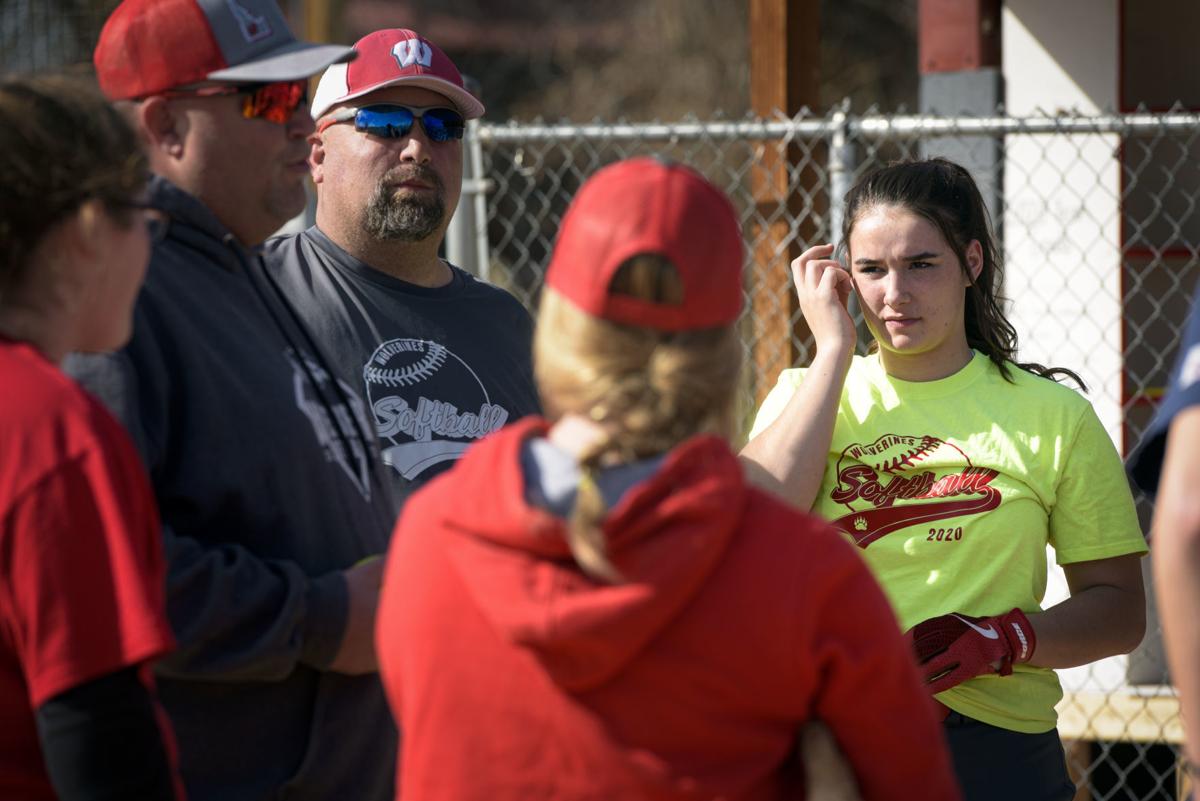 Erika Tyree listens while her softball coaches give instructions at the beginning of practice on Wednesday, March 11, 2020 at Weiser High School in Weiser. 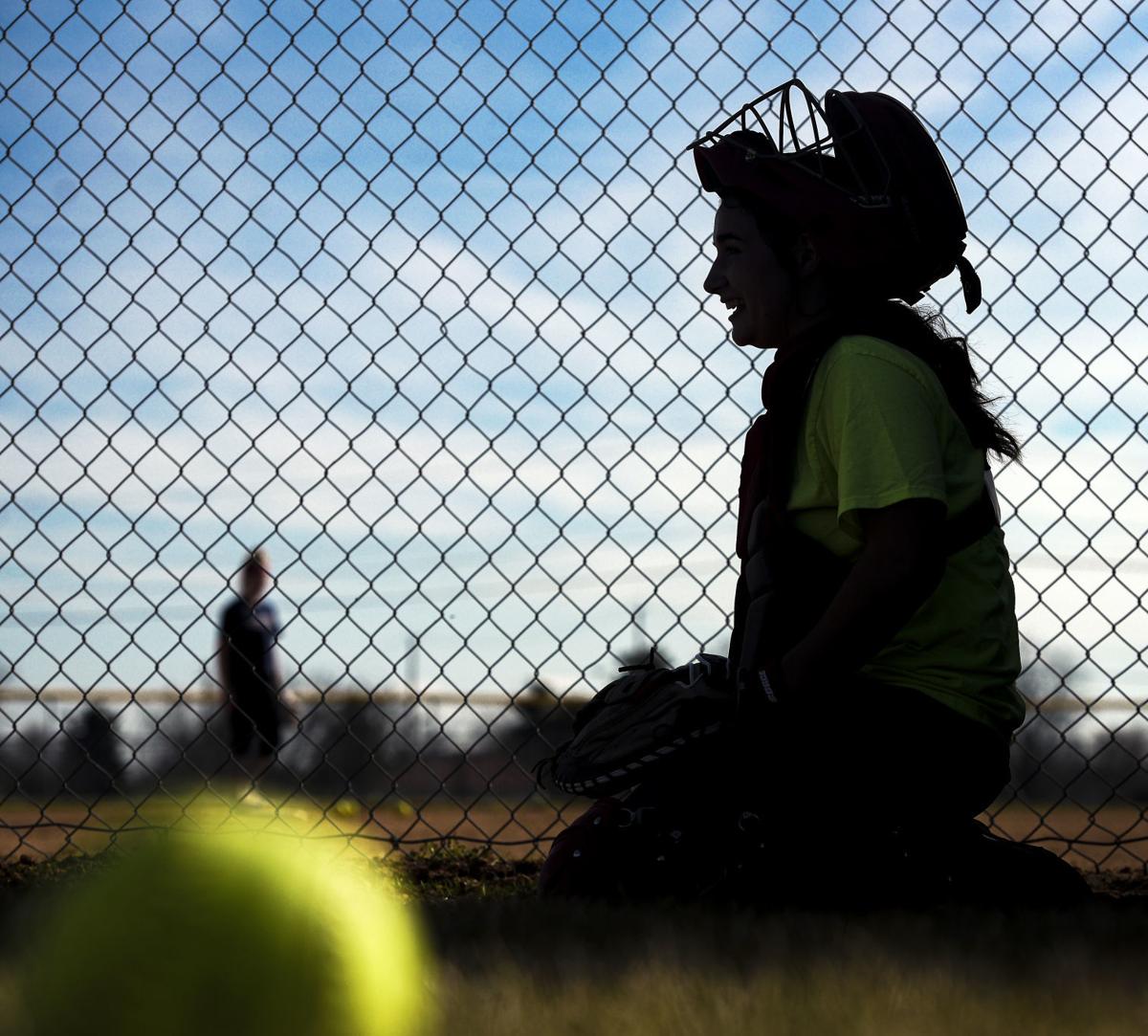 Erika Tyree, right, relaxes in between pitches during softball practice on Wednesday, March 11, 2020 at Weiser High School in Weiser.

Erika Tyree holds her glove up to catch a pitch during softball practice on Wednesday, March 11, 2020 at Weiser High School in Weiser.

Erika Tyree has a past that few if anyone would want to remember. But the Weiser High School senior catches proudly wears it on her sleeve and has used it to help turn her life around.

Erika Tyree throws the ball to a teammate during practice on Wednesday, March 11, 2020 at Weiser High School in Weiser.

Erika Tyree listens while her softball coaches give instructions at the beginning of practice on Wednesday, March 11, 2020 at Weiser High School in Weiser.

Erika Tyree, right, relaxes in between pitches during softball practice on Wednesday, March 11, 2020 at Weiser High School in Weiser.

“I don’t know where to start,” she said.

The Weiser High School softball senior catcher’s past is just one big blur anymore. A blur of pain that lasted 16 years. But one that at the same time, shaped her into who she is today.

A near 4.0 student over the last three years.

“It really shows how strong she is,” senior outfielder Madison Phillips said. “Just how much fight she has in her to overcome even the hardest and toughest of life’s challenges.”

Hitting, digging balls out of the dirt and picking runners off base since she was 4 has always been the easy part.

Off the field — well that’s an entirely different story.

Tyree didn’t meet her dad until she was 5. She has no recollection of it, though. Her first memory of him came at 9.

Mike Tyree didn’t even know he had a daughter until Child Support Services showed up at his doorstep with a swab kit at Erika’s mother’s request.

“It was kind of bittersweet because I was (ticked),” Mike said. “The first few years of a child’s life are important. The first time she walked, the first time she talked, I missed all of it. Why would she withhold something like that from me?”

She was a drug addict.

An addition to pain pills came after a heart transplant surgery when Erika was 6. So the money she did scrounge up from part-time bartending jobs fed that addiction instead of paying for rent.

“Our living situation kind of just depended on what guy my mom was dating,” Erika said.

One of them allegedly physically abused her and her older sister for years.

She witnessed her stepfather at the time shove her sister’s head into a door in the seventh grade. The abuse only stopped after her sister tried to commit suicide and was sent to a psych ward.

But the stepfather just turned his attention to Erika.

He shut a car door on her in the eighth grade — a month after her sister was hospitalized. He then smashed a glass cup across her face while she was doing the dishes one day. It left a noticeably sized gash — one that a friend of hers helped cover up.

They told people she had accidentally hit her in the face with her locker after opening it.

“My mom and him said my sister was crazy,” Erika said. “I didn’t want them to say I was crazy and send me to the mental facility too. I was scared.”

Erika also no longer had her father during that time. Her mother made sure of it.

She didn’t allow her to see him and controlled when and how much time they spoke. She did this in response to Erika’s pleas to live with her father.

“I wanted to reach through the phone and choke her to death,” Mike said. “It was horrible. It was probably the toughest thing I’ve ever had to deal with because I was helpless to protect someone I love so much.”

A catcher’s mitt and bat were not enough anymore. So she quit.

“It was my rock,” Erika said. “It was the one thing that had always been there for me no matter what.”

So she turned to cutting her arms.

The breaking point came when her stepfather was taking her home from school. He reached over and hit Erika in the chest, knocking the wind right out of her.

“I honestly felt like I was going to die,” Erika said.

She snuck into his room and grabbed her phone while he was watching television later that night. Erika then walked into the bathroom, turned the shower on, called her boyfriend at the time and escaped through a window. Erika ran down the street to her boyfriend, who was parked a few houses down outside.

They headed straight to the police station.

The stepfather was arrested that same night. She never saw him again.

But it didn’t end there.

A few days later, Erika filled up the bathtub, took about a dozen of her mother’s heart pills and slit her wrists just to be sure.

“My mom blamed me for everything,” Erika said.

She woke up in the hospital two days later. Her mom was the one who found her.

“The whole time I was there I thought, ‘OK, I’m stronger than this. I can’t ever give up again,’” Erika said.

She relied on that newfound strength for the next couple of years.

Her mom got a new boyfriend and moved in with him just three months after her suicide attempt. Erika was forced to sleep on the couch because the spare room was used to store his bongs.

The new boyfriend didn’t like her. So her mom kicked her out.

She dropped her off at the Portland International Airport in the middle of the night.

Erika said, “I love you” before exiting the car to board a flight to live with her father in Weiser.

She hasn’t seen her mother since.

“I just didn’t understand after everything we had been through, why she didn’t want me anymore?” Erika said.

When Erika arrived in Weiser in spring 2017, most of her previous school credits didn’t transfer over. So she was academically ineligible to play softball again her freshman year. The only way for her to be involved with the team was by keeping stats with Phillips, who had just tore her ACL.

Phillips was about the only friend Erika had that season.

“Her cocky demeanor and her very do-what-I-say attitude made a lot of people not like her,” Phillips. “She came off as someone really confident almost to the point of being arrogant. She wasn’t afraid to say what she was thinking or make anyone mad. She just said whatever she thought without a filter.”

Things weren’t any better at home.

Erika was sneaking out going to known drug houses. She was also seeing a 19-year-old high school dropout. Bolted down bedroom windows and trips to the police station weren’t even enough to deter her.

“I don’t know if I slept a full three hours for the rest of the year,” Mike said.

Mike was also subjected to painful words like “I hate you” and “You were never really there for me.”

But unlike so many others, Mike didn’t give up on her.

“She just needed to know that I actually loved her and was gonna fight for her,” Mike said.

Erika doesn’t hesitate when talking about the present.

She has it all now.

A father who hasn’t missed a single game.

A stepmother who’s watched all 358 episodes of Grey’s Anatomy with her.

A sister who she recently just reconnected with. She is now a nurse in their hometown of La Grande, Oregon.

And a team which loves her.

“She leads man and she’s always positive,” Weiser coach Brad Cordes said. “With the issues going on right now, with this pandemic, she’s the one saying, ‘Hey, we’ll get through this. Our season is not over until they say it’s over.’ She was one of the first ones to step up and say that.”

And as for her past?

“I’m not ashamed of it or anything,” Erika said. “I’m actually kind of proud of it because it just made me better instead of making me worse.”