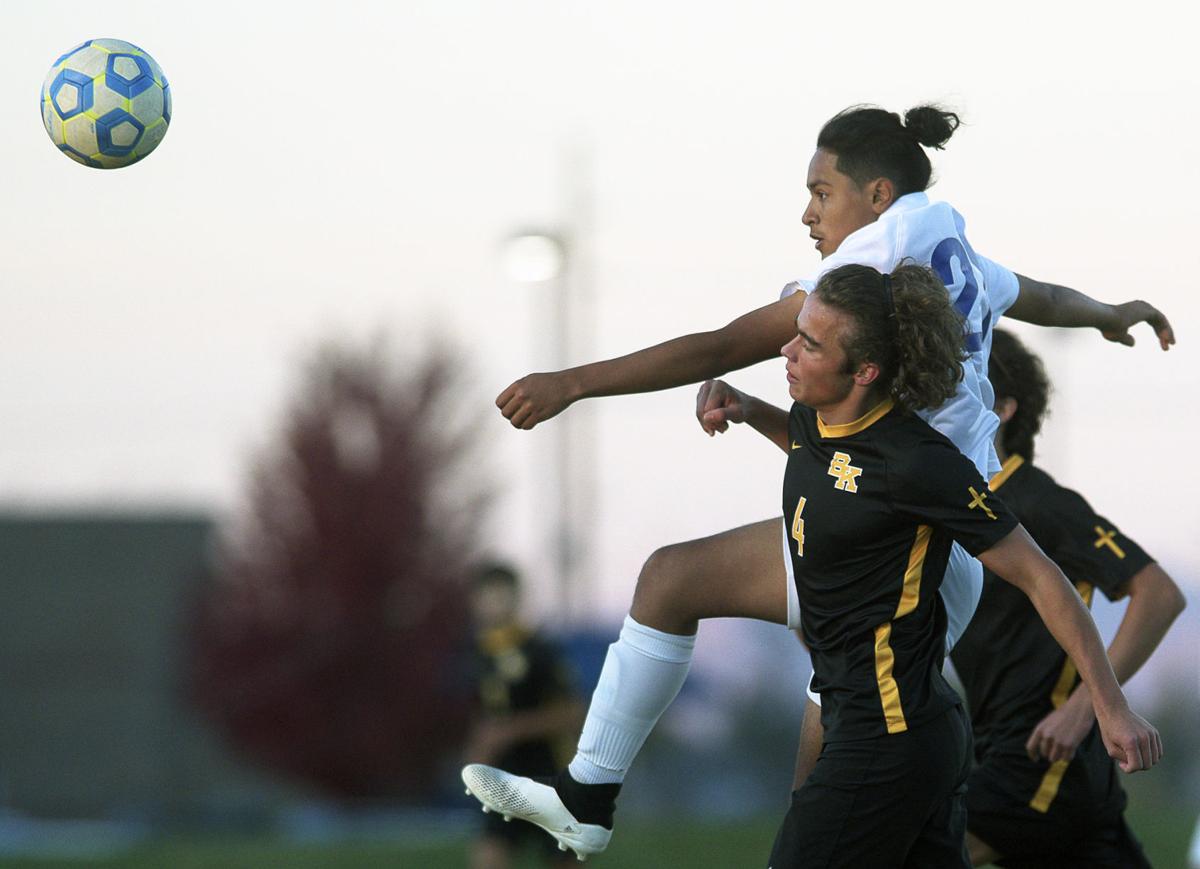 Caldwell defender Israel Arizmendi (23) and Bishop Kelly midfielder Jake Dahl (4) battle for control of the ball during the 4A District III championship match on Thursday. 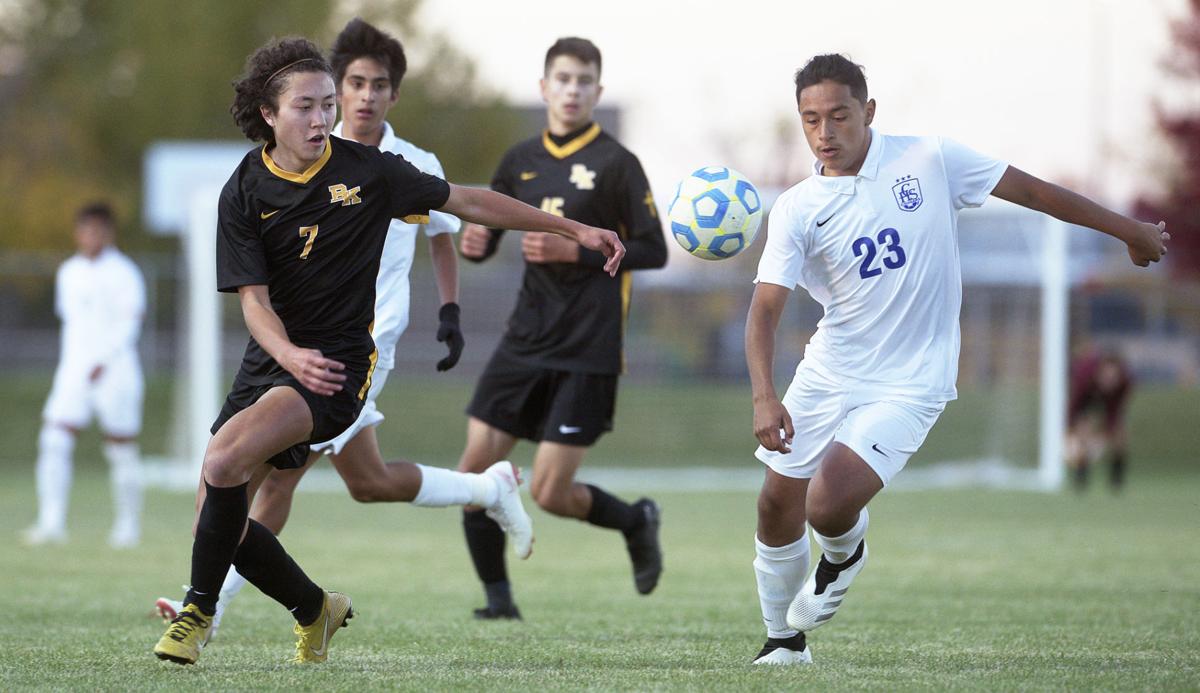 Bishop kelly midfielder Shawn Cabus (7) and Caldwell defender Israel Arizmendi (23) chase after the ball during the 4A District III championship match on Thursday at Middleton High. 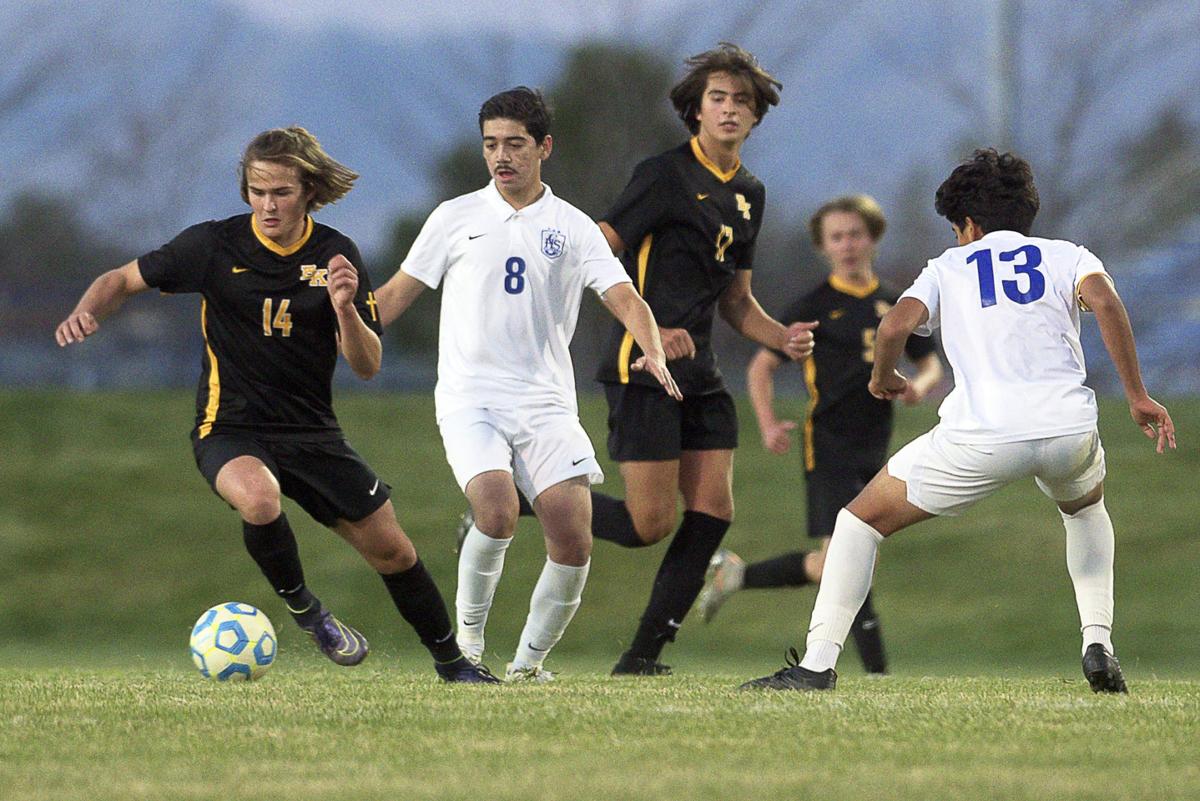 Bishop Kelly forward Nic Taugher (14) carries the ball down the field during the 4A District III championship match against Caldwell on Thursday.

Caldwell defender Israel Arizmendi (23) and Bishop Kelly midfielder Jake Dahl (4) battle for control of the ball during the 4A District III championship match on Thursday.

Bishop kelly midfielder Shawn Cabus (7) and Caldwell defender Israel Arizmendi (23) chase after the ball during the 4A District III championship match on Thursday at Middleton High.

Bishop Kelly forward Nic Taugher (14) carries the ball down the field during the 4A District III championship match against Caldwell on Thursday.

After watching the Knights give up the game’s first goal to Caldwell with seven minutes left in Thursday’s 4A District III championship game, their coach knew he was going to find out what his team was made of.

Turns out, they have a championship mentality.

Bishop Kelly scored two goals in the game’s final six minutes, including a Jake Dahl goal on a scramble in front of the net with 24 seconds left, as the Knights came back to win 2-1 and claim their first district title since 2010.

“It’s definitely a big deal for us, we haven’t won state in a very long time,” said Dahl. “We definitely have a very good chance of winning it this year.”

The Knights will be going into the tournament having beaten the two-time defending state champions, Caldwell, twice this season. Bishop Kelly beat the Cougars (8-3-1) 5-3 in both teams’ season opener on Sept. 15.

“It just verifies for us that our feelings about what team we could be are legitimate,” said Vreeland. “We know if we see them again it will be just as hard, if not harder. In our mind, this is our expectations.”

For a minute, it looked like Caldwell was on its way to a third straight district title. After 73 minutes of scoreless soccer, Caldwell’s Clay Walton found himself by the corner of the Bishop Kelly net and found teammate Ernie Hernandez in front of it. Hernandez put the ball away to give Caldwell a 1-0 lead with 6:55 left in the game.

“At that point I was interested to see if we were going to quit or bounce back and be the team that we expect ourselves to be,” said Vreeland.

It took less than a minute to find the answer. A Nic Taugher crossing pass went into the net with 6:02 left in the game. There was some question on whether or not it bounced off of Gabriel Clement before going in, but either way, it tied the game.

“We were kind of down, but we still had hope,” said Bishop Kelly defender Hiram Huerta. “We wanted this from the beginning and we had a feeling we were going to get this.”

A lot of the hope the Knights still had late in the game were due to a pair of Huerta stops in the first half. He took a direct shot to the head on a kick by Caldwell’s Damian Arguello after Arguello had gotten past Bishop Kelly goalkeeper Henry Neal. After ricocheting off Huerta, the ball went safely over the Bishop Kelly net. Late in the first half he also intercepted a centering pass attempt in front of the net, which would have given Caldwell a strong scoring opportunity had the pass been converted.

In the final minute of regulation play was stopped after a collision a midfield, which resulted in a yellow card for both teams. Caldwell’s yellow card was assessed to Nick Caceres, his second of the game, meaning Caldwell had to finish with a man down. After a deep boot on the ensuing kick, a scramble took place in front of the net.

Caldwell goalkeeper Rylan Tutor punched the ball away from the net, but it landed on Dahl’s feet and Dahl was able to put it away for the game-winner.

Despite the loss, Caldwell will get a chance to defend its two state titles next week, as well. The Cougars will open against Blackfoot.