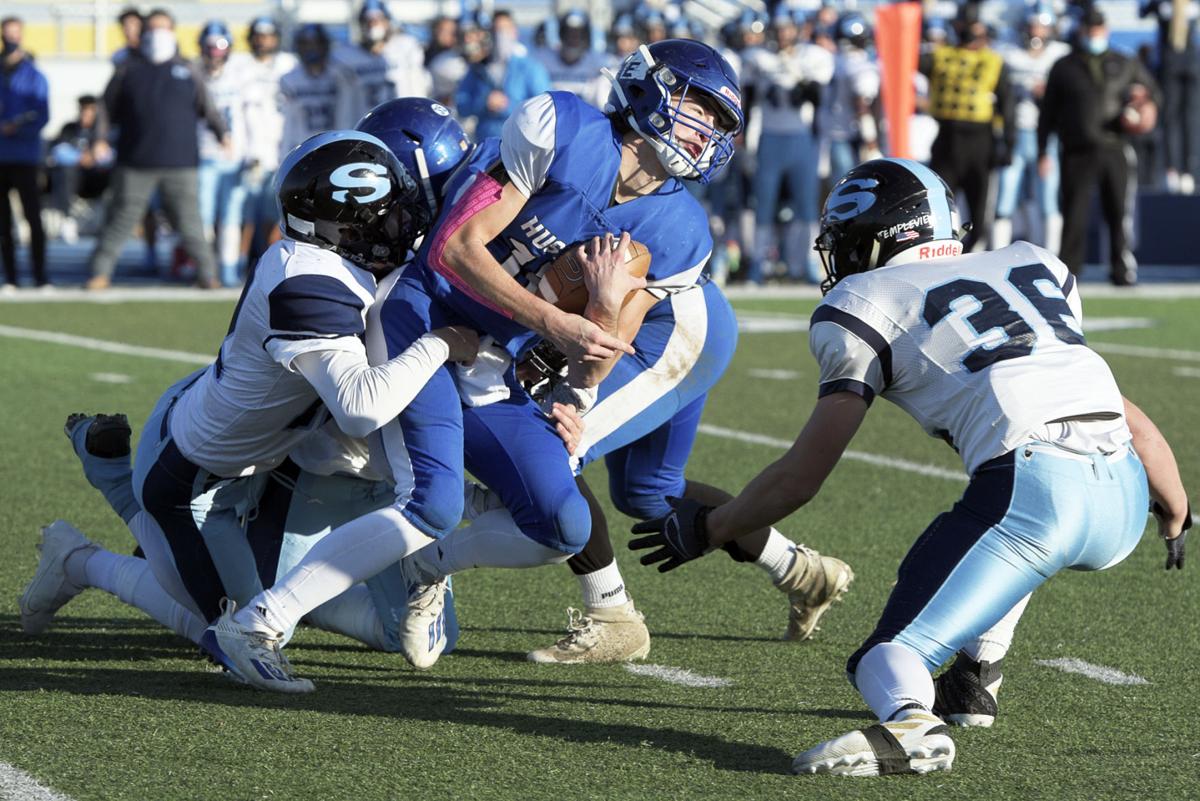 Emmett quarterback Caden Young (12) is tackled by the Skyline defense in the State 4A championship football game Saturday. 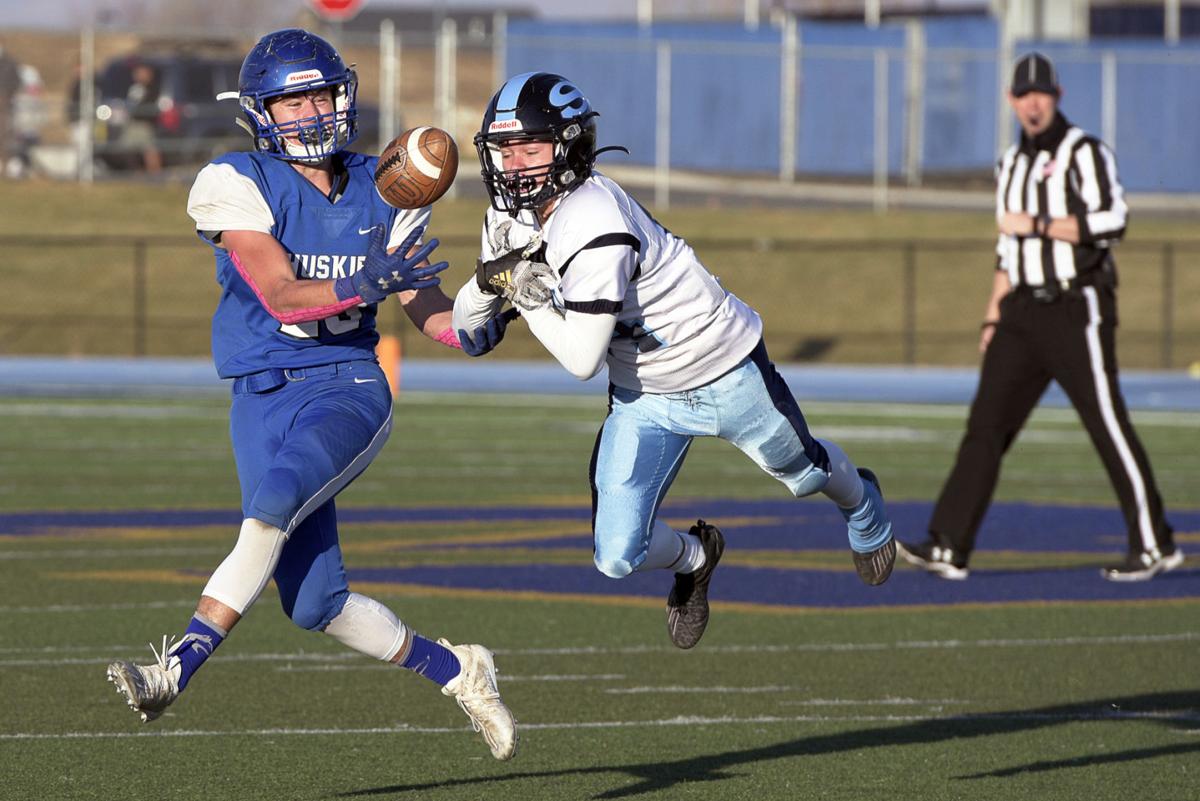 Skyline safety Ian Galbreaith (14) breaks up a pass intended for Emmett running back Westyn Smith (23) during the 4A state football championship game Saturday.

Emmett quarterback Caden Young (12) is tackled by the Skyline defense in the State 4A championship football game Saturday.

Skyline safety Ian Galbreaith (14) breaks up a pass intended for Emmett running back Westyn Smith (23) during the 4A state football championship game Saturday.

MIDDLETON — The Emmett football team was able to make 11:59 stretch out for multiple games during its Cinderella 2020 season.

And even though the clock struck midnight in the 4A State Championship game, the Huskies are hoping that just because this season is over, it doesn’t mean their relevance in the 4A classification is as well.

Skyline ended Emmett’s run with a 42-22 victory on Saturday to claim the Grizzlies’ third state title since 2016. The loss ends a storybook season for Emmett (10-3), which won its first 4A Southern Idaho Conference title and had come-from-behind victories in its quarterfinal and semifinal games against Blackfoot and Century, respectively.

“I would say that we’ve returned Emmett to the legitimacy of the football landscape in Idaho,” said Emmett coach Rich Hargitt. “We don’t have to apologize for that. I’m just immensely proud of our kids, our kids showed a lot of character, a lot of fight.”

Hargitt joined the Huskies in 2018, just three years after Emmett won a 3A state title. In his first two years, the Huskies struggled. Emmett went 1-8 in Hargitt’s first year and 3-6 last year, but after getting a taste of life near the top of the 4A ranks, Emmett is hoping it can make trips back in the years to come.

“This year we set it up for next year,” said senior running back and linebacker Westyn Smith. “The junior class that’s under us, they know what winning is like, and now they just have to set it as a standard.”

Early on, it appeared that Emmett might have what it took to pull off one more win and give the Huskies the ultimate ending to their 2020 story. The Huskies took an early lead after Smith came up with a fumble recovery on Skyline’s first drive of the game.

Quarterback Caden Young connected on a long pass to Kayden Owens to set up the Huskies at the 1-yard line. Young ran it in on the next play.

The Huskies forced a fumble on the ensuing kickoff, giving Emmett the ball back at midfield. But Emmett was unable to do anything with that turnover, something that turned out to be a theme of the night.

Emmett’s defense held a 5-0 advantage in turnover margin, but the Huskies weren’t able to do much with the five turnovers — three fumble recoveries and two interceptions. They scored just 14 points off of them.

“We thought we’d win the turnover battle and we were pretty confident we would,” said Hargitt. “We thought we could play turnover-free football, and did. We thought we could turn them over, and did. The problem is we said we had to have three really big game-changing plays and if we didn’t get those three plays, we felt like we’d probably be about a 14-to-20 point (underdog) to them.”

There was also the problem of defending senior receiver Connor Maloney, who torched Emmett’s defense on four touchdowns and running back Eli Ames, who had a touchdown reception and run.

“There’s so many people on the field for them, that they can score every time they touch it,” said Hargitt. “You’re trying to cut down who can get it and how they can get it and it seems like every time you turn around to take one weapon away, another weapon emerges. It’s incredibly hard to hold them to a manageable point.”

Behind those weapons, the Grizzlies (12-1) scored 29 consecutive points, with quarterback Cade Marlow throwing three touchdown passes and receiver Davien Cruz throwing one to Maloney on a double pass.

“You got to give some credit to Skyline, they did wake up,” said Smith. “They are a great football program, but I guess the boys got a little bit excited and started not executing their stuff like they were. That’s what opened the door for Skyline.”

Emmett picked up its fifth turnover of the game with a big return by Jeffery Lockett to the Skyline 7. One play later, Smith ran it in to cut the Grizzlies’ lead to 15.

Tanner Brown appeared to have Emmett’s sixth turnover with an interception on the next drive, but the pick was overturned by a pass interference call. The next play Marlow connected with Maloney again for a 19-yard touchdown pass, extending the lead to 35-14.

Emmett recovered an onside kick, but opted not to attempt to close the deficit any further, letting the clock run out.

“Our goal was never to win a state championship, so to be quite honest to be here in this game is a great thing for this program,” said Hargitt. “It’s a huge step forward. Our goal this year was to earn the respect of 4A programs across the state. Playing Emmett’s not a joke, we deserve to be on the field with 4A competition. And I would like to say we earned that respect. We didn’t play very well tonight, so maybe we didn’t earn it tonight, but I think throughout the course of the year and the course of the playoffs, we showed we’re a legitimate team that should be taken seriously and not be taken lightly.”