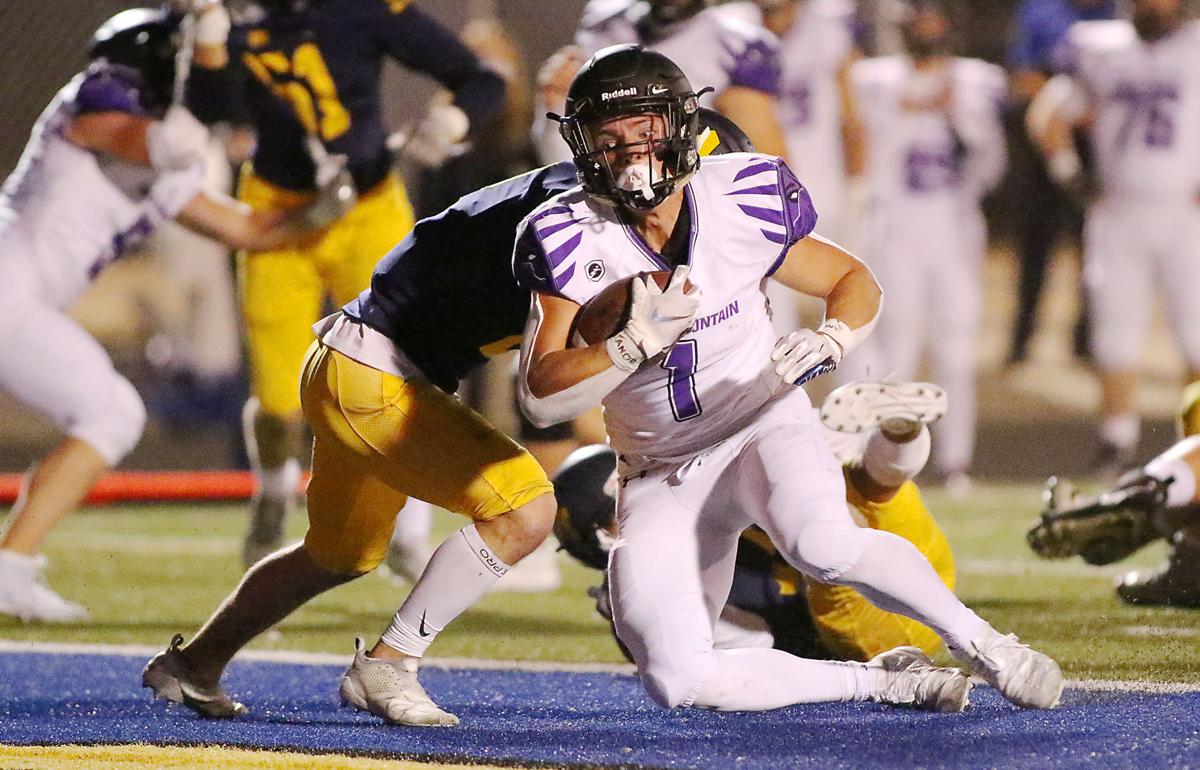 Rocky Mountain’s Jordan Erickson (1) rolls into the end zone to score a touchdown against Meridian on Oct. 16. 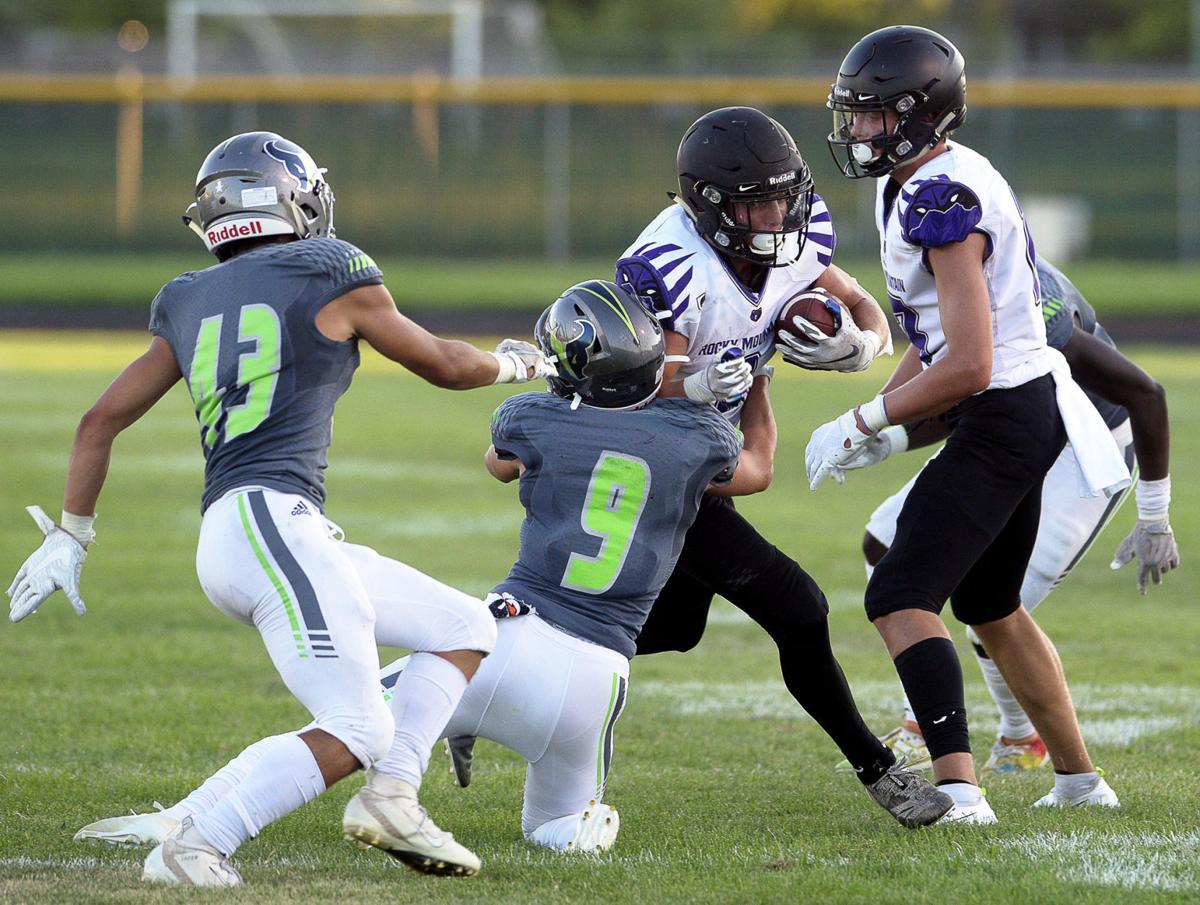 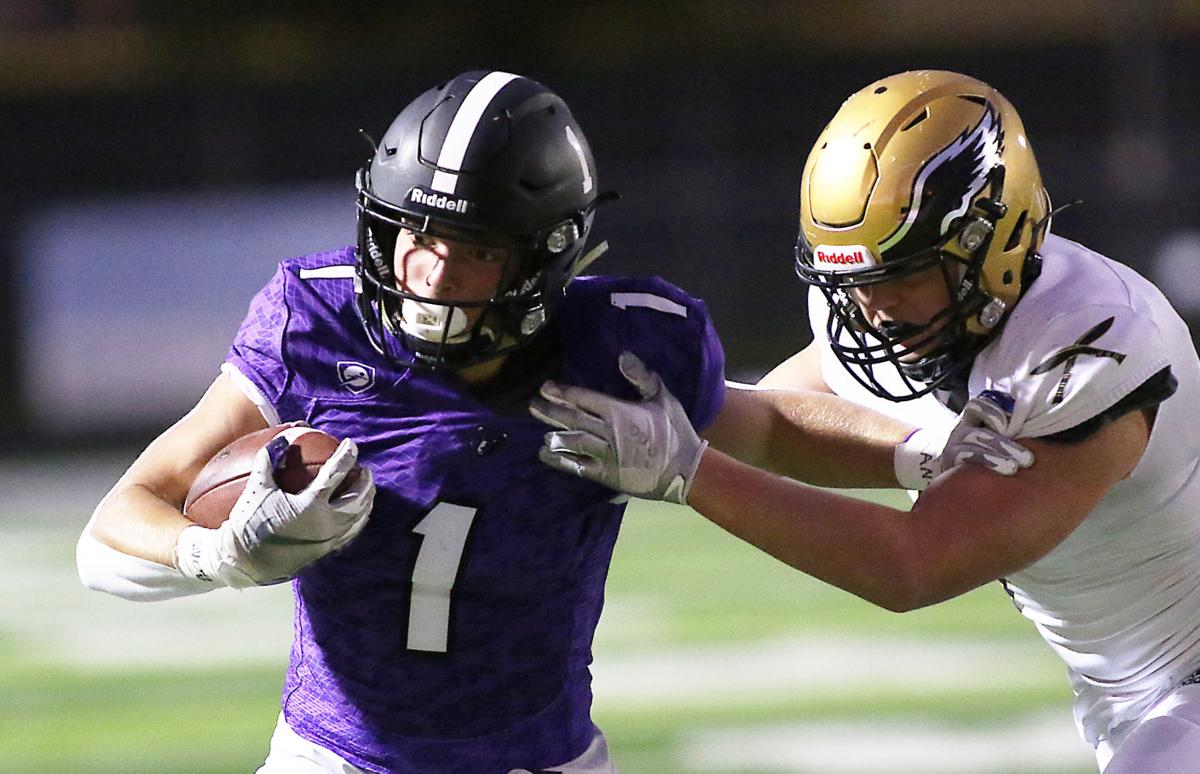 Rocky Mountain running back Jordan Erickson (1) is driven out of bounds by Capital linebacker Kaden Reimer (7) during the 5A Southern Idaho Conference Championship game on Oct. 23.

Rocky Mountain’s Jordan Erickson (1) rolls into the end zone to score a touchdown against Meridian on Oct. 16.

Rocky Mountain running back Jordan Erickson (1) is driven out of bounds by Capital linebacker Kaden Reimer (7) during the 5A Southern Idaho Conference Championship game on Oct. 23.

Jordan Erickson’s heart on the football field was invested in taking handoffs and running the ball downfield. At least that’s what the Rocky Mountain High senior thought at the end of his junior season.

But as the Grizzlies started installing plays for the 2020 season, Erickson started to realize he’d be getting more involved in the passing game as well. Rather than lament in a decrease in his rushing attempts, he took the challenge head on.

And now with the Grizzlies on the doorstep of a second 5A state title in three years, he is realizing that the change has made him a more rounded football player as he’s been able to shine in both the running back and wide receiver position this year.

The Grizzlies (8-0) are hoping that versatility can lead them to the state title today. Rocky Mountain will take on defending state champion Rigby (10-0) in the 5A state championship game at noon at Madison High in Rexburg.

The Trojans beat Rocky Mountain 31-9 last year in the state semifinals game, the Grizzlies’ only loss over the last three years.

“The coaches don’t really talk a ton about that loss,” said Erickson. “It’s more the inner drive of the players that were in that game. Obviously the state championship is a huge driving factor, but the loss to Rigby last year on top of that, that’s big for us.”

The senior enters the game having helped the Grizzlies in various facets of the game — not just running and cawtching the ball.

In addition to his 383 rushing yards, five rushing touchdowns, 655 receiving yards and 11 receiving touchdowns, Erickson has specialized as kick returner for Rocky Mountain, averaging 38.2 yards per return with two kickoffs early in the season returned for touchdowns.

“He’s just a really good athlete and a smart football player,” said Rocky Mountain coach Chris Culig. “He’s just stepping up, whatever we ask him to do, he’s willing to do it.”

That includes getting thrown into a cornerback role in the middle of last Friday’s 36-21 semifinal win against Coeur d’Alene. With Rocky Mountain having a couple of corners banged up during the game, the Grizzlies threw him into that position, despite Erickson not having practiced corner back at all this season.

While he has seen some time at nickel, playing a hybrid linebacker-safety role, Erickson said that was the first time that he had ever been on man-to-man coverage in a game situation.

“I think I like safety more, but learning corner right off the bat and not knowing a ton about it was fun,” said Erickson. “I was just going out there, trusting my instincts and doing what I can do.”

Despite the fun he had on defense, it’s still been offense where he’s made the biggest impact for Rocky Mountain, particularly in the playoffs. In the Grizzlies’ semifinal and quarterfinal wins, he had a combined eight catches for 357 yards and five touchdowns. Four of his five touchdown receptions in that span have gone for more than 65 yards.

“Knowing there’s a lot more pressure has allowed me to focus more,” Erickson said about his postseason success. “It’s been a driving factor.”

His versatility has also caught the eye of college recruiters, as he currently holds offers from all three service academies — Army, Navy and Air Force — as well as Idaho, San Diego and the College of Idaho. Erickson said he’s been waiting for the season to end before narrowing down the list. That season’s end will come after the game today, regardless of a Rocky Mountain win or loss.

Until then, his focus is on making sure that result a win, and getting a second state championship to go with the one he won as a sophomore in 2018.

“He’s just a perfect example of what we’re looking for,” said Culig. “He came in as a freshman and was a good player as a freshman, but he committed himself to the weight room, committed himself to the program. He was always looking to get better and kept improving and improving. He’s really good for the younger kids, he pays attention and is supper approachable. He’s everything you want as a player.”