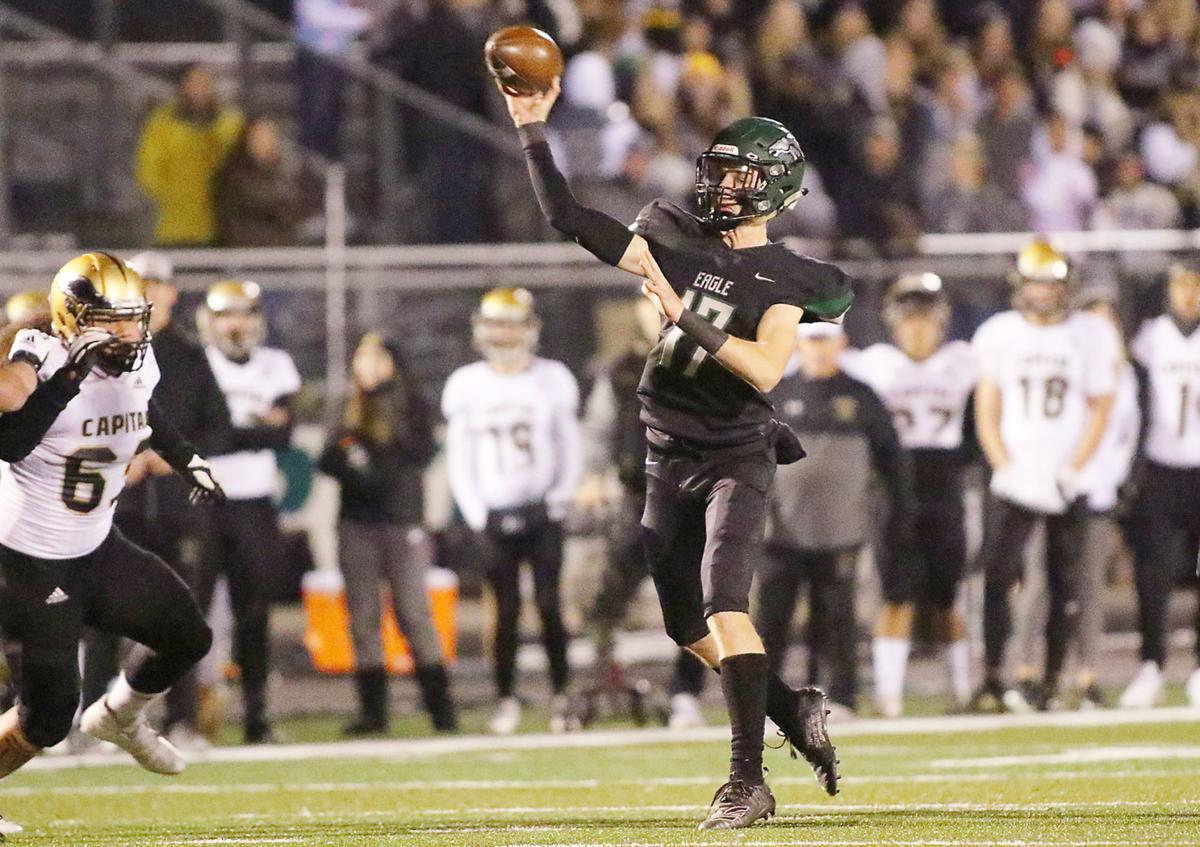 Eagle quarterback Mason McHugh (17) was a backup just a few weeks ago after losing a very close competition in the preseason. He now has the Mustangs in the quarterfinals of the 5A state playoffs. 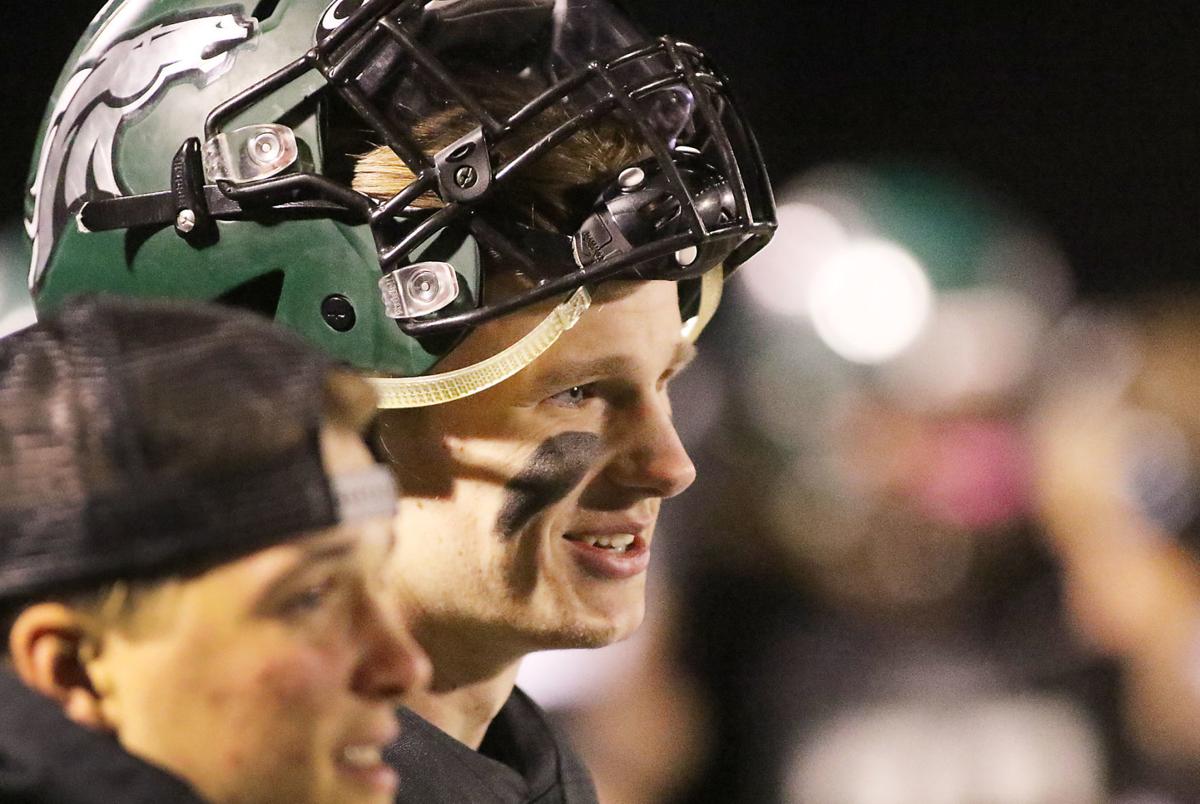 Eagle’s Mason McHugh watches from the sidelines during a first-round playoff game against Capital on Nov. 1. 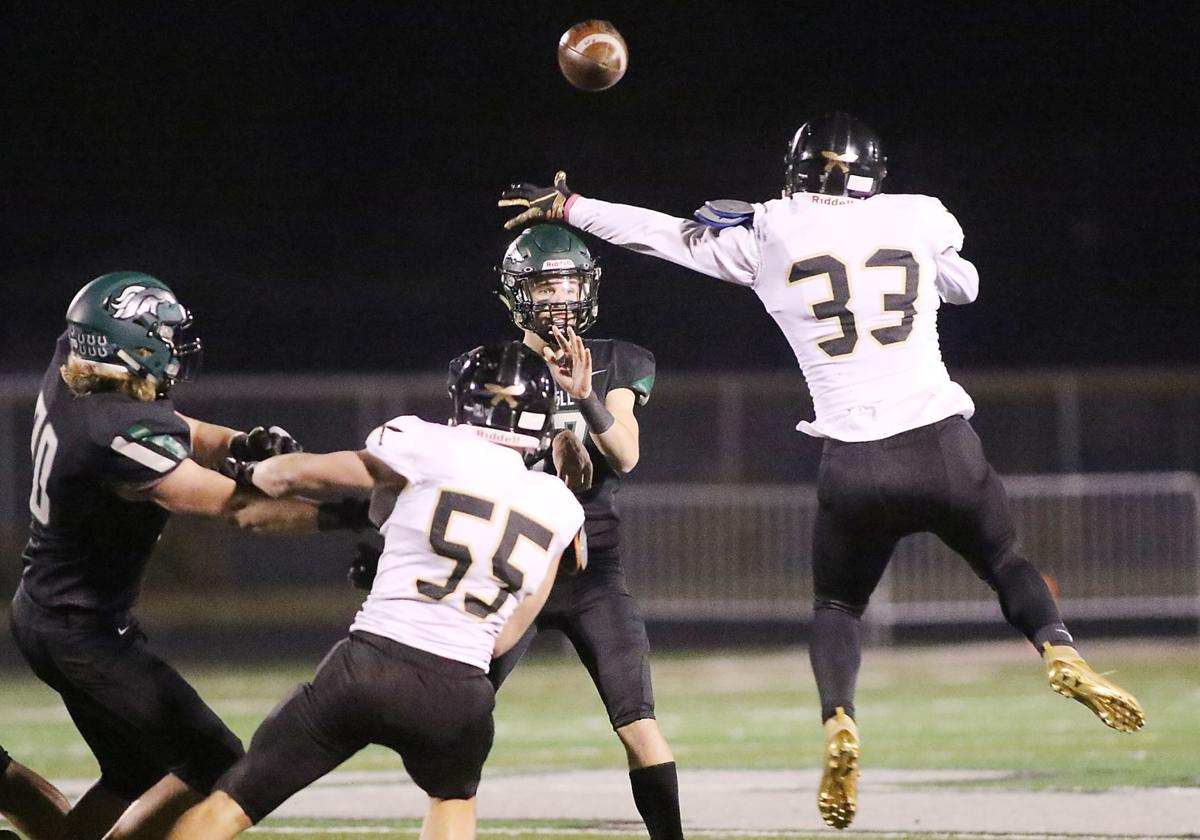 Eagle's Mason McHugh (17) threads a pass through the reach of Capital's Jackson Reed (33) during a game at Eagle on Nov. 1.

Eagle quarterback Mason McHugh (17) was a backup just a few weeks ago after losing a very close competition in the preseason. He now has the Mustangs in the quarterfinals of the 5A state playoffs.

Eagle’s Mason McHugh watches from the sidelines during a first-round playoff game against Capital on Nov. 1.

Eagle's Mason McHugh (17) threads a pass through the reach of Capital's Jackson Reed (33) during a game at Eagle on Nov. 1.

EAGLE — No one quite knew what to make of Mason McHugh.

The Eagle High School quarterback was the new kid who became the odd man out. He lost out on the starting job to the hometown kid and spent much of the first seven games this season standing around on the sideline.

The sophomore is now fully embraced by his teammates and has them in position for their first state title in a decade. Eagle (7-3) visits No. 5-ranked Rigby (7-1) at 7 p.m. Friday in the quarterfinal round of the 5A state football playoffs.

“It had to have been tough being in the situation he was in at that age, but he handled it really well,” Eagle coach John Hartz said. “It showed maturity because this year was probably the first year where he really had to compete for a starting job because he was always the starter at every level before that. So it was the first time he faced adversity and I think in the long run, it made him better.”

The 6-foot-3, 175-pound signal caller always planned on going to Bishop Kelly. He had gone to school and played in its system at Cole Valley Christian Schools since kindergarten.

But things started changing when McHugh began working out with Eagle offensive coordinator James Cluphf in sixth grade. McHugh liked the idea of being in Cluphf’s pass-happy offense more than Bishop Kelly’s traditional run-first attack. So he and his family moved into the district before the start of his freshman year.

He made an immediate impression with his size, reputation and attitude.

McHugh was already 6-foot-1. He had started at quarterback since the age of 7 and had people like UC Davis receivers coach Cody Hawkins training him. Hawkins is also a former Bishop Kelly and University of Colorado quarterback and the son of ex-Boise State coach Dan Hawkins. McHugh led the Boise Black Knights club team to a national championship in the eighth grade.

And on one of the first days of Eagle High summer workouts, he walked right into Paul Peterson’s office and asked if he could attend the varsity team camp at Idaho State. The former and longtime Eagle head coach had never had a freshman ask him that before.

McHugh went and even saw some reps with the varsity team. He started at the Famous Idaho Potato Bowl 7 on 7 Tournament later that summer.

But Peterson elected to go with Ben Ford, a sophomore at the time who was more of an athlete than a traditional quarterback. He had only thrown a handful of passes during his freshman year.

So McHugh was put on the freshman team where he passed for 2,100 yards and accounted for 43 total touchdowns. He still dressed down for varsity for every game and even ran for a score against Boise that season.

“I learned a lot about the speed of the game and that was huge because as a freshman that’s the biggest adjustment,” McHugh said. “When you go into a varsity game, it’s just different. So it gave me a lot of confidence in myself that I could compete at that level at such a young age.”

Hartz had a really tough decision to make upon being named the successor to Peterson in February. Ford or McHugh?

Ford earned All-Southern Idaho Conference first-team honors after racking up 2,925 yards of total offense and 32 touchdowns last season. But McHugh was the MVP at the Western Oregon Camp over the summer. He was also on the USA National Team and practiced with the likes of Clemson’s Trevor Lawrence, Oklahoma’s Jalen Hurts and Alabama’s Tua Tagovailoa at the renowned Steve Clarkson Quarterback Retreat in Los Angeles.

Hartz said the hotly contested competition divided the coaching staff. But the final decision was his. So he took his time to name a starter — up until two hours before kickoff of the team’s season-opener against Centennial on Aug. 30.

He went with Ford.

“Oh, it was one of the toughest decisions I’ve ever made as a coach. But I felt like Ben was the right choice,” Hartz said. “In the end, I just didn’t see how I could deny the kid after the type of year he had as a sophomore. There was a known quantity there.

“But at the same time, I knew what Mason could do with the football, so we always had plans for him too.”

Ford got the Mustangs off to a 4-0 start and ranked as high as No. 2 in the state media poll. McHugh, meanwhile, didn’t see the field for the first two games. His first significant playing time came during a 35-28 loss to Mountain View on Sept. 27. He completed 9-of-14 passes for 136 yards and a touchdown, including a 40-yard strike to Dalton Mashore in the second quarter for his first varsity touchdown pass.

However, that was about the extent of his playing time through the first seven games of the season.

“At first, we were a little skeptical about where he’d be mentally after that,” senior wideout Cam Churchill said. “If he’d break down completely or just keep going and earn his spot. He actually did the second one. He didn’t complain or go off on anyone. He definitely became a team player.”

So Eagle turned to him following an unfortunate injury in a 23-22 loss to Timberline on Oct. 11.

During a rugby style punt in the third quarter, Ford took off with the football upon realizing he wasn’t going to be able to get it off after one of his teammates missed a block. Ford tried to cut behind a player, but immediately fell over as soon as he planted his right foot.

It was a torn ACL in his right knee.

“Ben pulled me aside and told me it’s torn. He’s crying. He’s a competitor, so it broke his heart more than anything. He told me this is my team now and I got to lead them and bring them to a state championship,” McHugh said. “It meant a lot. Ben is unprecedented in the valley. So for him to say that, was a special moment.”

McHugh nearly snapped defending state champion and No. 1 Rocky Mountain’s 19-game winning streak at the time in his first career varsity start on Oct. 18. He went 14 of 20 for 111 yards with a touchdown and an interception in the 19-13 overtime loss. He then notched his first career varsity win in a 35-14 victory over Capital in the regular-season finale a week later.

“This is a guy that could have been a starter on any other team in the state, so we never doubted him,” Churchill said. “He just stepped right in there and we didn’t miss a beat because even after everything, he still had that belief in himself that he was going to get the job done no matter what.”

But his real coming out party came during last week’s first-round playoff game against Capital. He finished 20 of 28 for 379 yards and accounted for seven total touchdowns, which tied two program records in the 52-32 victory. His seven total touchdowns matched Dillon Lukehart’s 2010 record. The six touchdown passes also equaled the mark that ex-BYU quarterback Tanner Mangum put up against Vallivue in 2011.

Mangum personally reached out to McHugh on Instagram afterwards.

“We had a little bit of a back and forth conversation,” McHugh said. “I got to pick his brain on some things, so it was definitely surreal getting advice from one of the greatest quarterbacks to ever come out of Idaho. And at the end, he told me to just keep plugging away.”

McHugh, who has gone 85 of 126 (67%) for 1,162 yards and 13 touchdowns to one interception, along with three more scores on the ground since taking over, will now face a much stiffer test Friday in Rigby. The Trojans are on a seven-game winning streak. Their only hiccup is a 31-26 road loss to No. 2 Coeur d’Alene in the season-opener on Aug. 30. They have allowed just 12.1 points per game and have an average margin of victory of 25.3 points, including over perennial power Highland.

The Mustangs also haven’t advanced to a state semifinal in three years and have been there just twice since their last state championship in 2009.

But that was before McHugh.

McHugh is now a well-known commodity with people like Boise State offensive coordinator and quarterbacks coach Zak Hill asking about him.

“At the end of the day, I just had to trust the process. I knew with all of the years of preparation I had done, I would get a chance,” McHugh said. “Coach Hartz and Coach Cluphf emphasize the next play and how important the next play is because the previous play already happened. I think that’s true in life too.”