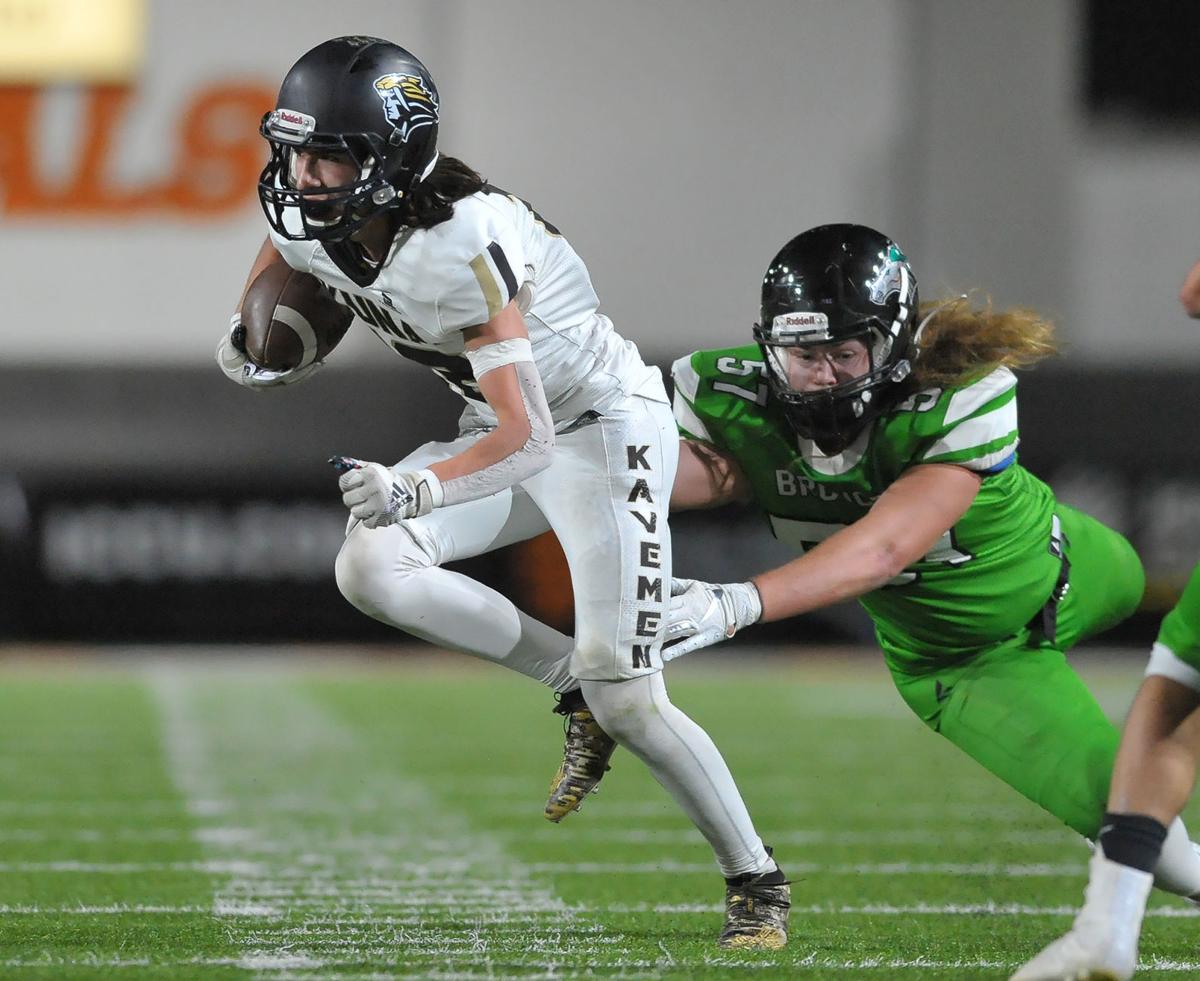 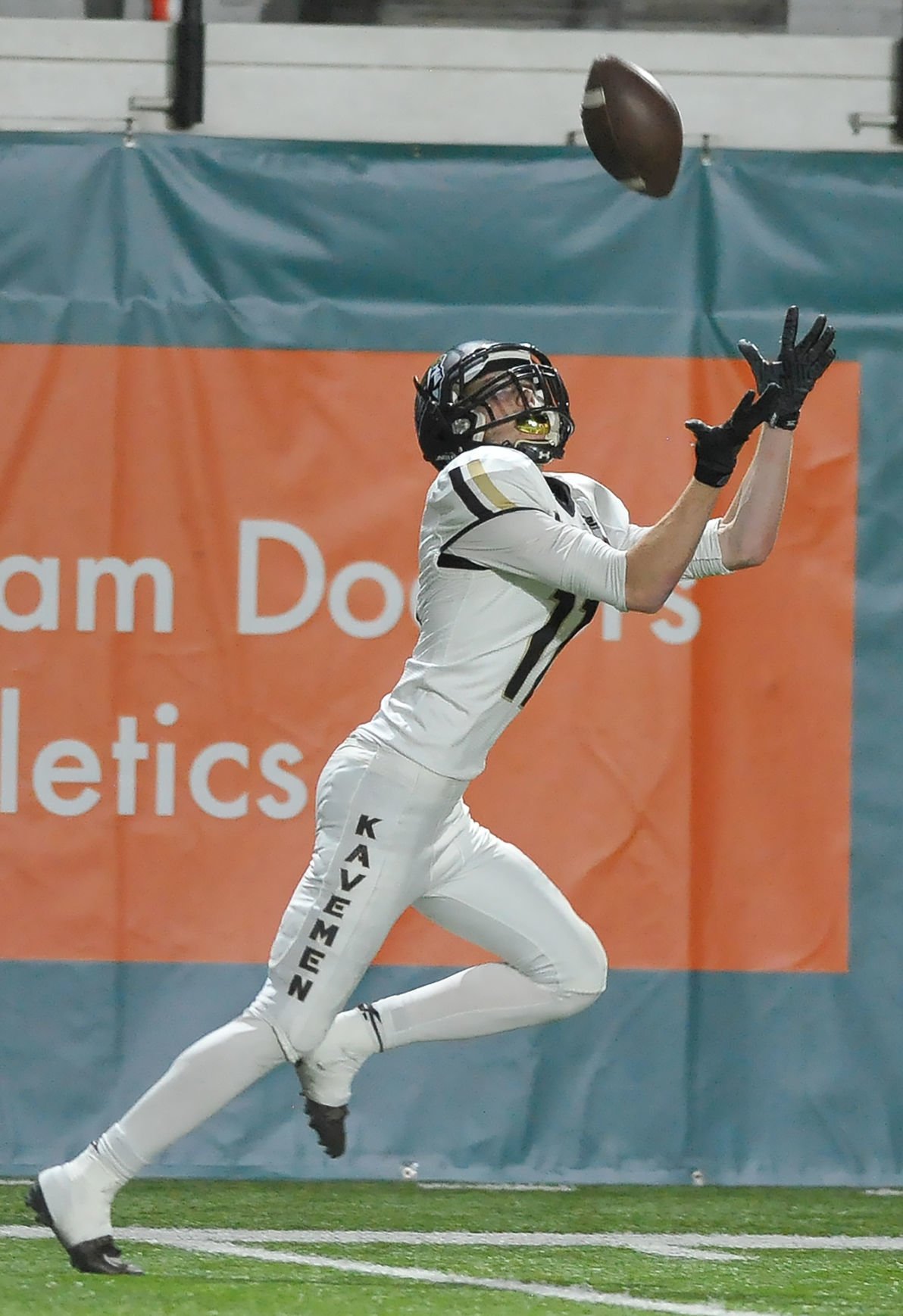 Kuna’s Mason Leatham (11) catches a pass for big yards and a touchdown against Blackfoot in the State 4A championship game at Holt Arena. 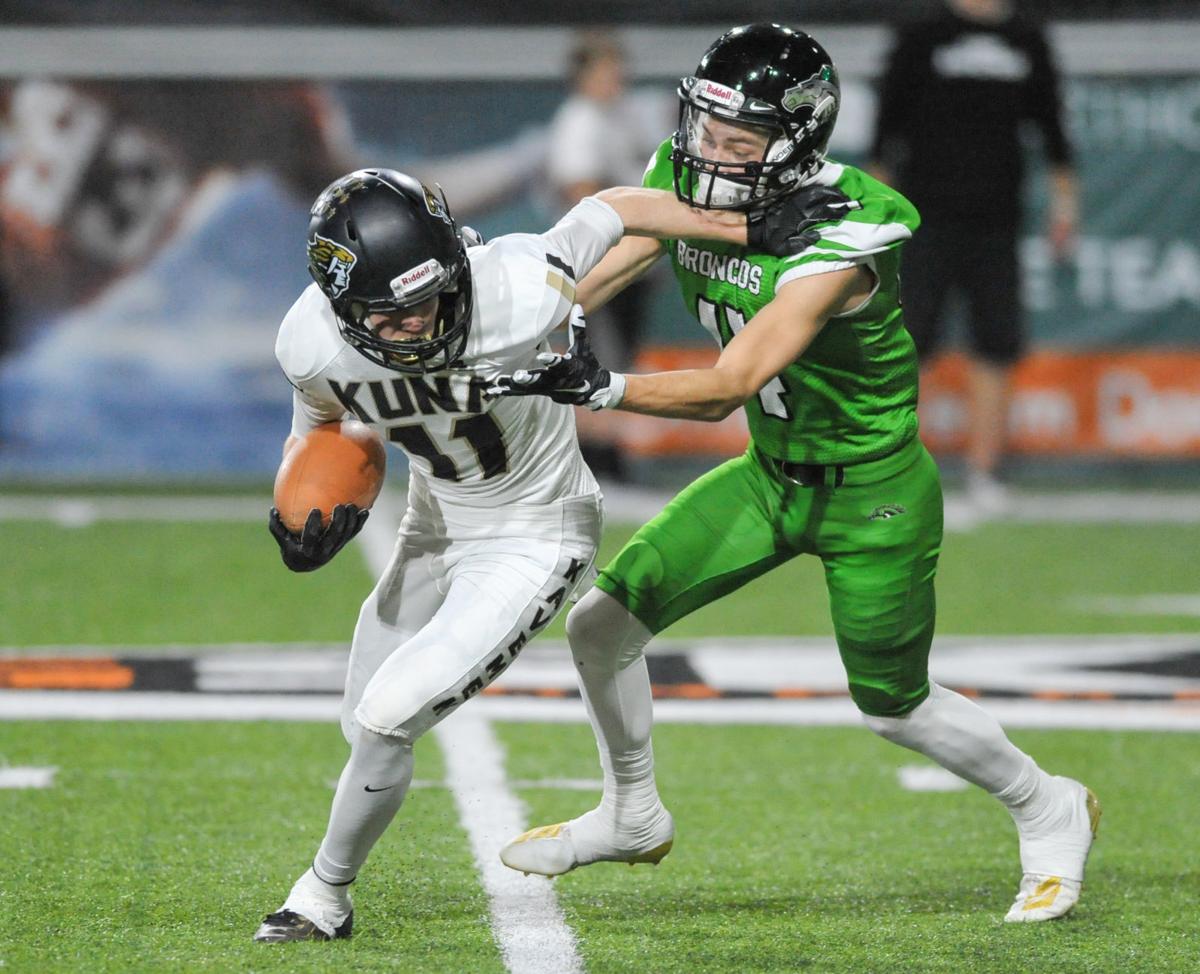 Kuna’s Mason Leatham (11) catches a pass for big yards and a touchdown against Blackfoot in the State 4A championship game at Holt Arena.

POCATELLO — The Kuna football team hadn’t made state in each of the last two seasons.

Hadn’t won a league title in 20-plus years.

And had just one playoff win since 1998. It wasn’t a popular pick to win this year’s 4A state title — but it was the right one.

The top-ranked Kavemen downed No. 2 Blackfoot 49-35 in the 4A state championship game Saturday evening at Holt Arena. It was the first 4A title in program history and the first since 1991 — when they were in the 3A classification.

“You work your tail off to get this, and this is awesome,” Blaser said with tears in his eyes. “I’m so proud of these kids. They work so hard. And we pushed them and pushed them, and we challenged them to be great and be elite. And they pulled it off. They pulled it off.”

“Happiest I’ve ever been,” Edwards said. “It’s crazy to see what a small community can do. What a small program can do. And how just one family can take it all the way.”

Kuna set three goals before the start of the season.

Those lofty goals seemed crazy to the outside world. Shoot, Kuna hadn’t even been to a title game in 21 years. And given Kuna’s history before this season, it was easy to see why. And it’s why the Kavemen were picked to finish fifth in the Idaho Press’ 4A SIC preseason coaches poll and didn’t receive a single vote in the state media poll.

Kuna took notice of the non-believers —even right before kickoff of Saturday’s game.

That’s exactly what Kuna did too.

It finishes the year with the state’s top offense among teams in the 4A and 5A classifications at 44.8 points and more than 479 yards per game — and now a state championship.

“It was all about proving everybody wrong,” Edwards said. “We always had the negatives. Nobody knew who we were until now. And they’ll know forever now.”

It didn’t look that way early, though.

The Kavemen fell behind 13-0 with 5:33 left in the opening quarter on a pair of long touchdown passes from Blackfoot’s Craig Young to Reece Robinson. On the game’s first play from scrimmage, Young hit Robinson on a swing route for a 76-yard score before finding him wide open on a 36-yard TD pass.

However, Kuna outscored the Broncos 35-8 the rest of the half.

The Kavemen got it going on a 1-yard TD run by Koltin Teater at the 3:08 mark of the first quarter. Ty Cobb then set them up with a first-and-10 at the Blackfoot 46-yard line after recovering the ensuing onside kick.

The Kavemen got their first lead of the game at 14-13 on the first play of the second quarter with a 13-yard TD throw from Austin to Brown, who snagged the ball right over Blackfoot’s Robert Zemp.

The Mustangs took the lead right back on a 19-yard pass from Young to Brayden Wright. Young then hit Ja’vonte King for the 2-point conversion to put Blackfoot up 21-14 with 7:26 remaining.

But the Kavemen closed the first half with 21 unanswered points.

Teater scored his second TD of the half on a 52-yard bomb from Austin, Brown outjumped another defender for a 5-yard score courtesy of Austin and Edwards pounded the ball in from two yards with three ticks left.

“We just got a couple big plays thrown at us that we weren’t entirely ready for,” Kuna senior defensive lineman Gavin Heindel said. “But then we just flipped our mindset and came back to kill things.”

The Kavemen doubled up their lead late in the third quarter at 42-21.

Edwards scored his second TD of the game on a 2-yard run with 3:24 remaining. It was the biggest hole the Mustangs (11-2), the winners of 10 straight and whose only loss was to Star Valley, a program MaxPreps called the best team in Wyoming with four straight 10-win seasons and three state titles during that stretch, had faced all year.

But they did make things interesting at the end. The Mustangs, a four-time state champions themselves, rallied back within 14 unanswered points. It began with a 15-yard TD pass from Young to Isaiah Thomas to cut the deficit to 42-28 with 56 seconds left in the third quarter.

Blackfoot then got the deficit back down to single digits at 42-35 when Young hooked up with Robinson for a third time on a 13-yard score with 5:25 remaining.

However, the Kavemen squashed any hopes of a comeback on their next possession. Edwards scored his third and final TD on a 15-yard run with 2:53 to go. A Cobb interception 13 seconds later and a fumble recovery by Vaughndavid Gregory with 26 seconds left, put the game away for good. An Austin kneel down made the unexpected, improbable, but perfect season official.

“When Ty Cobb got that pick, I just started crying, I was like, ‘We did it,’” Brown said. “It’s something that we’re never going to be able to forget. It’s going to stick with us for the rest of our lives. It’s a lifetime experience that no one can take from us.”