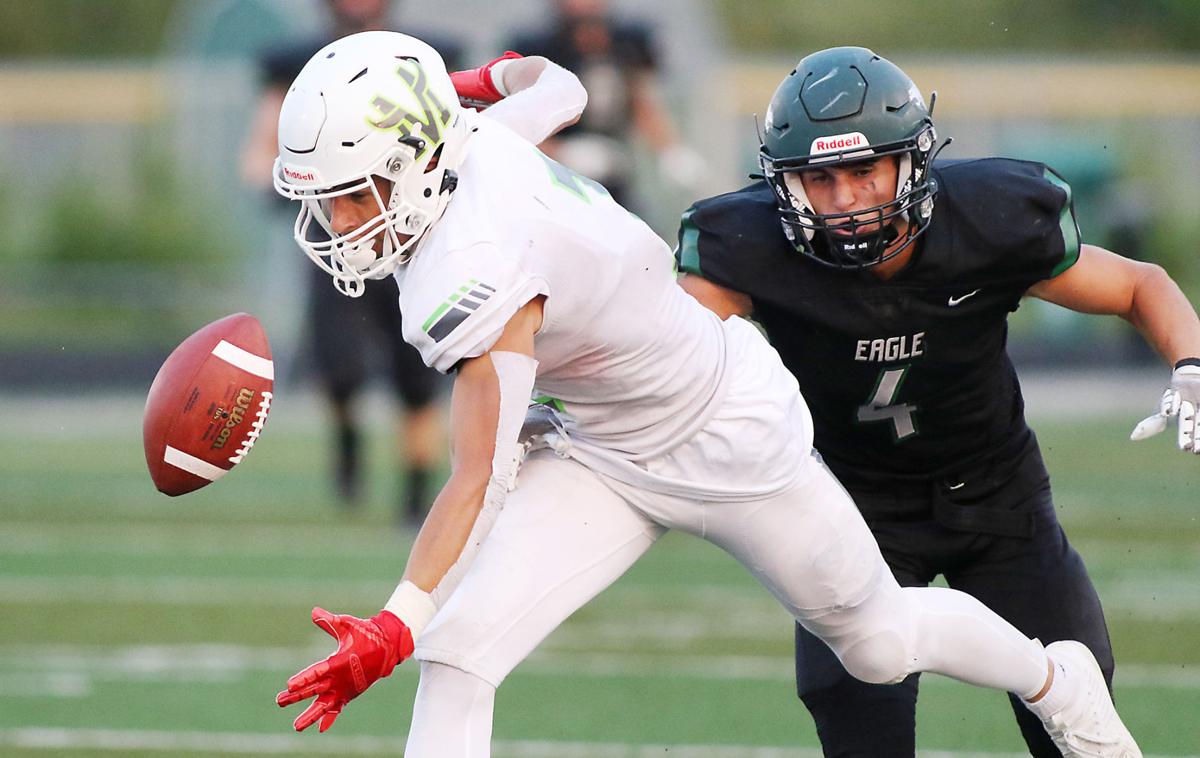 Eagle linebacker Chase Hilde (4) closes in as Mountain View wide reciever Leyton Smithson (2) reaches for the ball in a game Friday at Eagle. 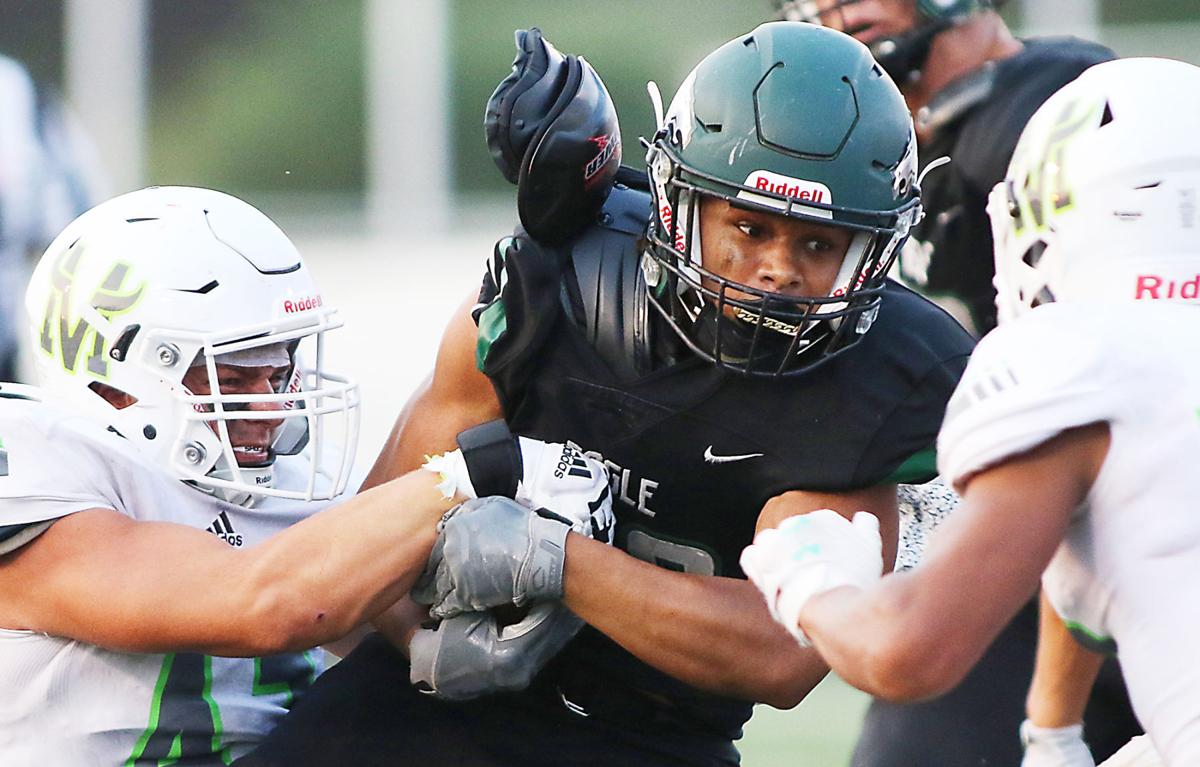 Eagle running back Jackson Stampfli (23) is stopped by the Mountain View defense during a game Friday. 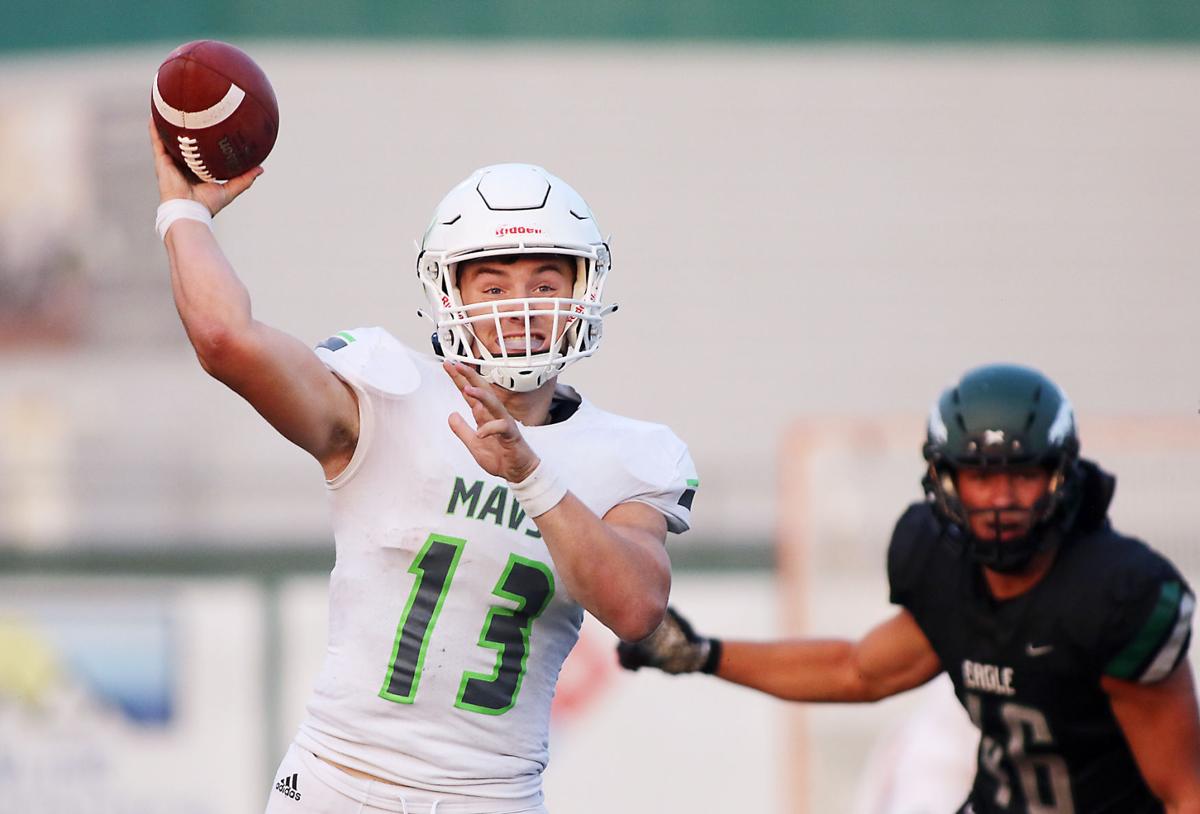 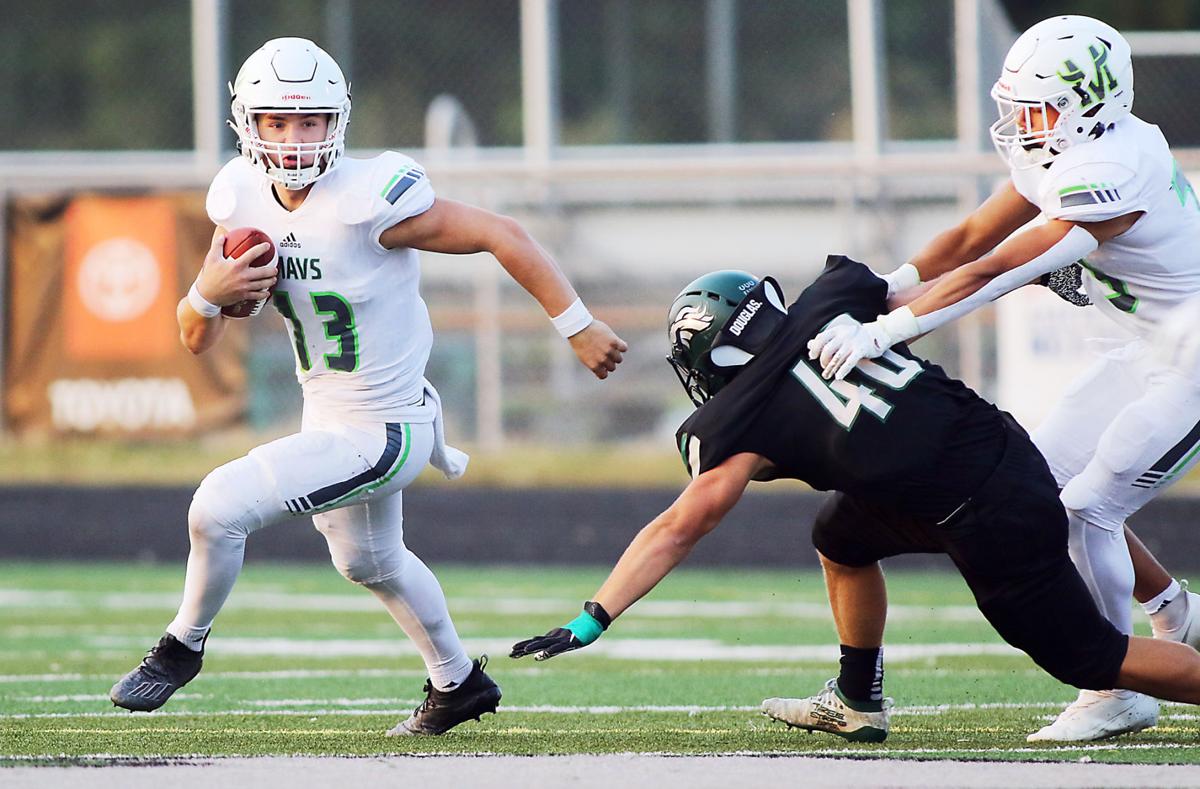 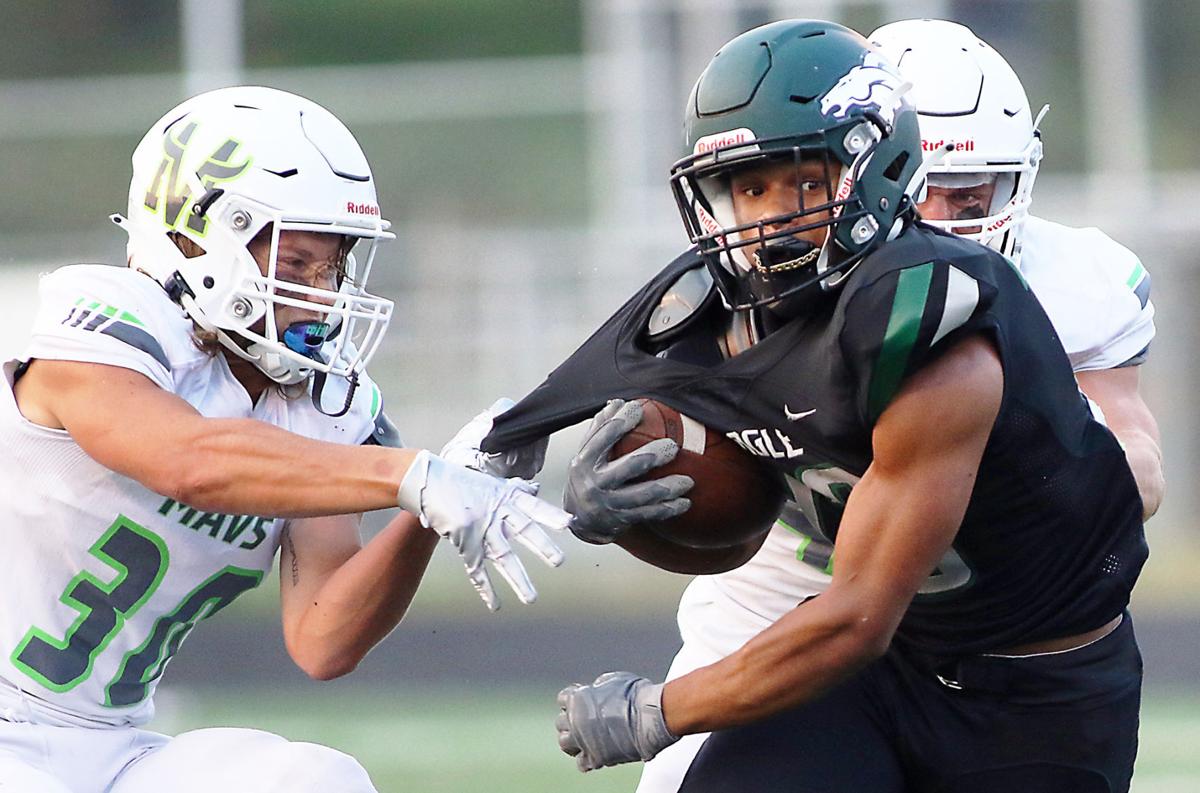 Eagle running back Jackson Stampfli (23) is snagged by Mountain View's Chase Lindsey (30) during a game Friday.

Eagle linebacker Chase Hilde (4) closes in as Mountain View wide reciever Leyton Smithson (2) reaches for the ball in a game Friday at Eagle.

Eagle running back Jackson Stampfli (23) is stopped by the Mountain View defense during a game Friday.

Eagle running back Jackson Stampfli (23) is snagged by Mountain View's Chase Lindsey (30) during a game Friday.

EAGLE — While Ben Ford and the Eagle Mustangs offense have been stealing much of the attention, the defense is showing it can't be ignored, either.

For the second straight week, the Mustangs shut their opponents down as the defense held Mountain View to a single touchdown in a 45-6 win at Thunder Stadium. The win comes a week after the Mustangs (2-0, 2-0 5A SIC West) shut out 2019 4A state champion, Kuna 64-0 season-opening win.

“We're just enjoying every moment we got with this coronavirus thing,” said senior linebacker Brett Tommasini. “We're just taking advantage of every single chance we got. We don't know when this thing's going to get shut down, so we're just playing to the best of our ability and we're just having fun with it."

Mountain View's offense certainly tested the Eagle defense, twice in the second half driving to the Eagle 1-yard line. But on both drives the Mustangs got fourth down stops to keep the Mavericks out of the end zone.

“It's easy to get caught up in how many interviews Ben Ford's done and how good he is, because he's a special athlete,” Eagle coach John Hartz said. “But there are a lot of kids playing at a high level on this football team. The defense, Nathan White is doing an incredible job in his first year as defensive coordinator and the kids themselves are following the game plan. They're doing incredible out there. I wouldn't have thought these two scores the first two weeks would have been like this in my wildest dreams. But at the same time, if our defense can play like that, it can be tough.”

For the second week in a row, Ford picked up more than 400 yards of total offense, passing for 315, rushing for 130 and accounting for four touchdowns. Running back Jackson Stampfli also picked up 182 yards rushing with a pair of touchdowns.

Ford helped Eagle get out to an 14-0 lead with two touchdown runs in the first quarter, including a 65-yard scramble in the final minute.

Jake Farris and Mountain View responded with a quick touchdown, with Farris finding Kayden Chan in the end zone for a 30-yard touchdown pass.

It was the first points allowed by the Eagle defense, and for another week, at least, are the only points they have allowed this season. The two-point conversion attempt by the Mavericks failed.

Eagle answered with Ford throwing his first touchdown pass of the game, an 18-yard score to Donovan Jones. It was the first of two times the pair connected for a score in the quarter, sandwiching an 82-yard touchdown run by Stampfli. Jones' touchdown with 59 seconds left in the half gave Eagle a 35-6 lead going into the half.

“He's our big tight end and he's got some great hands,” Ford said about Jones. “We try and get him out there past those linebackers, and it worked out well.”

A Jake Dellgard interception with 49 seconds left in the half could have given the Mustangs a shot at an even bigger lead at half, but Eagle was content to go in ahead 29.

The defense turned it up a level in the second half. On the first drive the Mavericks got to the Eagle goal line but Farris was stopped on a fourth-down run by a group of defenders led by Tommasini. In the fourth quarter, Mountain View had first-and-goal at the 1. But after three stops, a fourth-down fumble was recovered by Eagle.

White's scheming was a major advantage,” Tommasini said about the goal line stands. “It was really awesome, I really enjoyed playing with these guys next to me. They did a great job tonight."

Stampfli added a 2-yard touchdown run in the third quarter and the Mustangs added a late field goal.

Eagle will hit the road against Rocky Mountain next week for another big showdown in the 5A SIC West, which was formed earlier this week in response to teams having staggered starting dates due to COVID-19. The teams in the 5A SIC East don't begin play until next week.

With a little help from Mountain View against Meridian, the winner of the Rocky Mountain-Eagle game will put themselves on the brink of capturing the West Division title in mid-September.