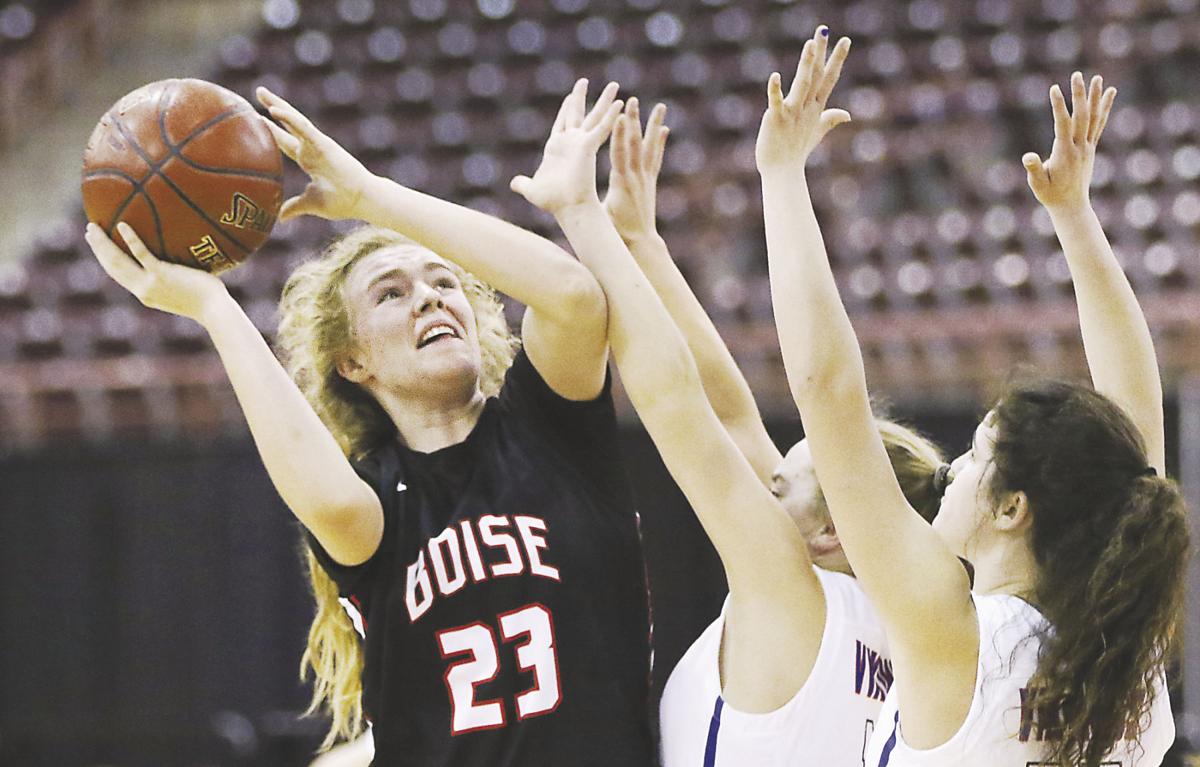 Boise’s Avery Howell (23) puts up a shot against Coeur d’Alene during 5A girl’s state basketball action Thursday at the Ford Idaho Center. 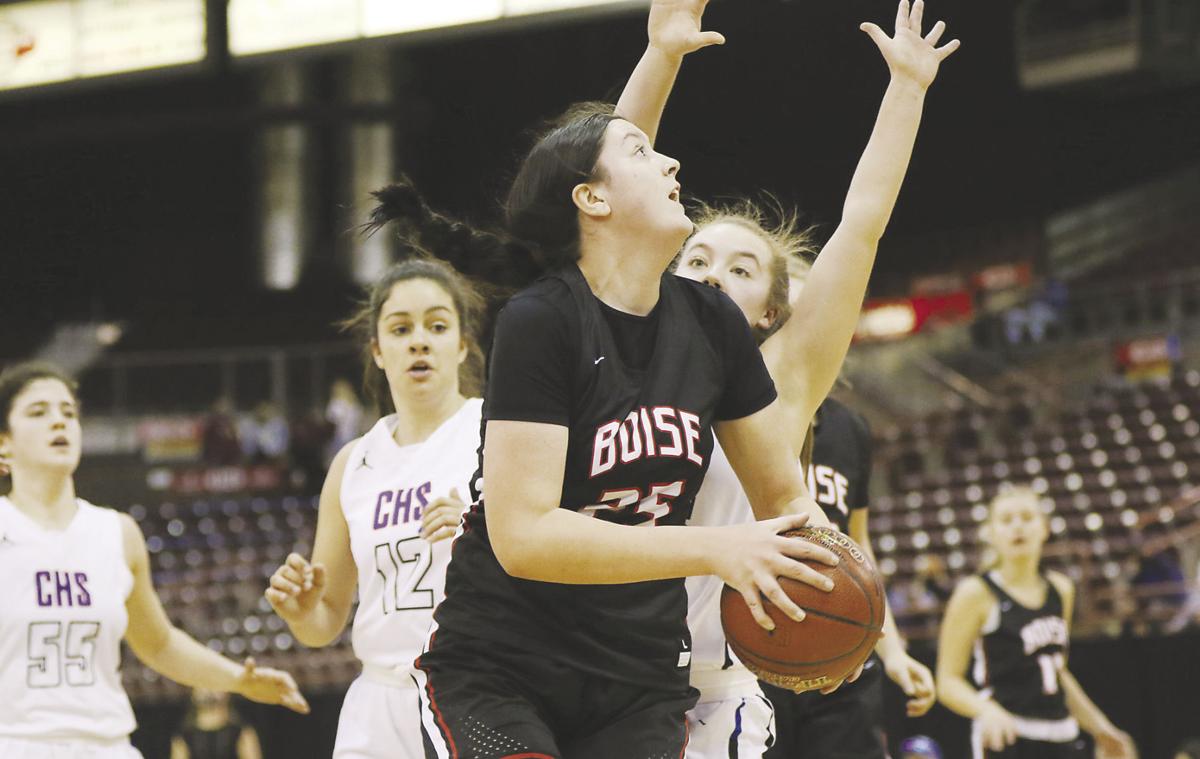 Boise Ashley Banks (25) sets up for a shot against Coeur d’Alene during 5A girl’s state basketball action Thursday at the Ford Idaho Center. 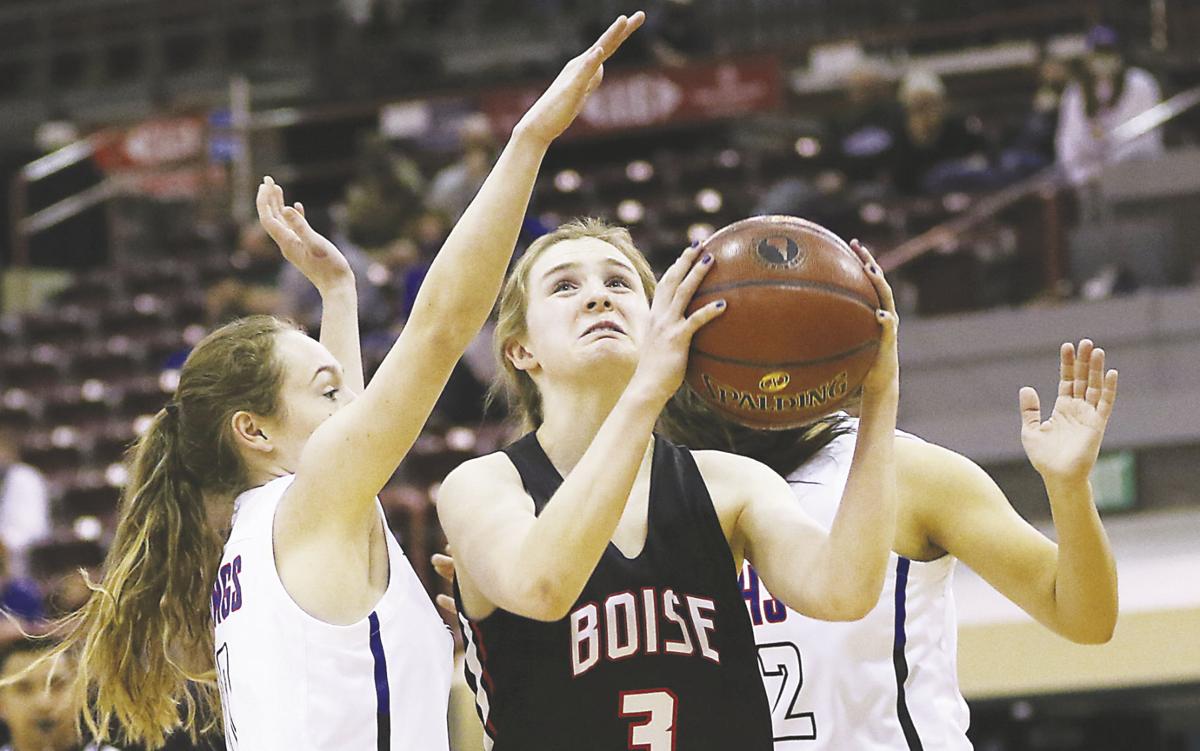 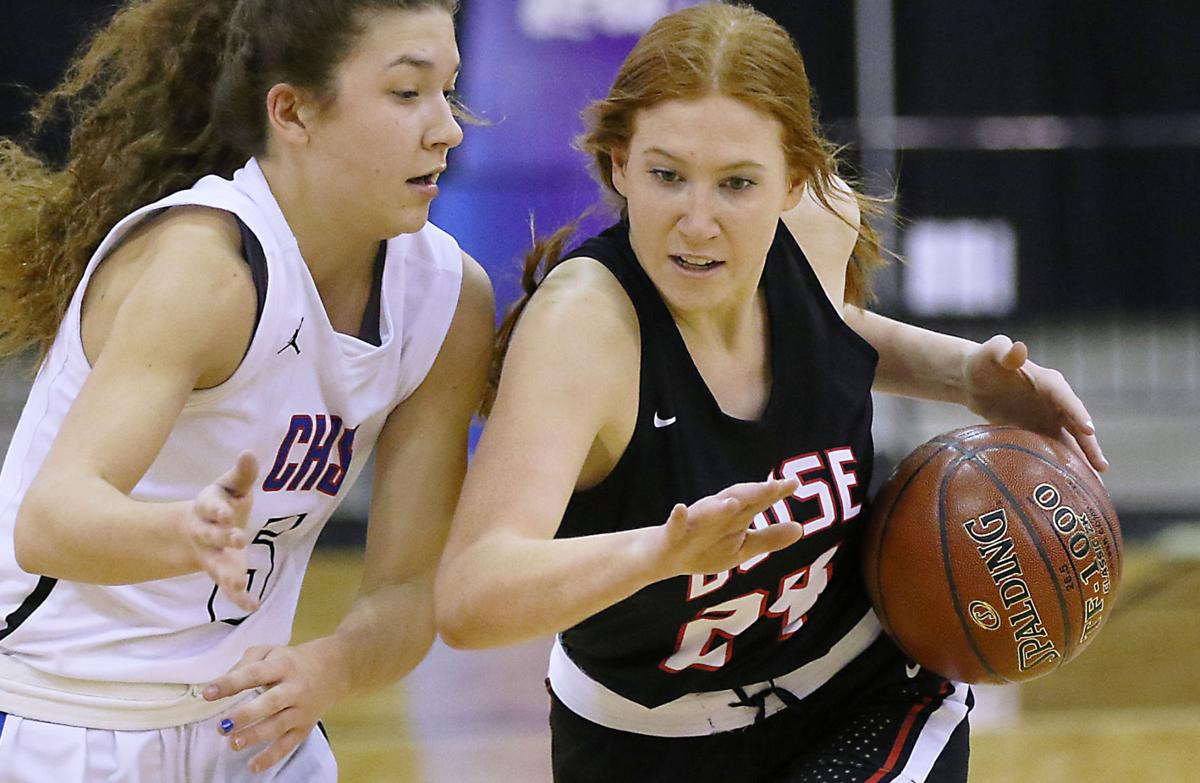 Boise’s Avery Howell (23) puts up a shot against Coeur d’Alene during 5A girl’s state basketball action Thursday at the Ford Idaho Center.

Boise Ashley Banks (25) sets up for a shot against Coeur d’Alene during 5A girl’s state basketball action Thursday at the Ford Idaho Center.

NAMPA — The Boise girls basketball team overcame a slow start in their 5A state tournament opener only to see a late lead slip away.

For about 22 minutes Thursday, the Brave looked like the dominant team. But it was the first five minutes and, more important, the last five minutes that did Boise in during a 56-50 loss to Coeur d’Alene on Thursday.

“Coeur d’Alene came out and fought and obviously they hit some big shots,” said Boise coach Kim Brydges. “Defensively we were just a step slow. I don’t know if we were excited about the moment or the arena, or what, but we weren’t exactly ready to go when that ball was tipped. Thankfully we got our bearings and clawed our way back into the game and actually took the lead, but we just weren’t able to finish today.”

An Allison Ross 3-pointer with 2:04 left pulled the Brave within 50-47 with 2:04 and after a defensive stop, Ross took a potential game-tying shot that missed the mark. It was the last chance Boise had at getting back into the game as Coeur d’Alene continued to hit its free throws.

Boise had to claw back just to even get back into the game in the first place. Early game struggles hit the Brave hard as the Vikings jumped out to a 13-3 lead and led 17-7 after the first quarter.

The Vikings led by nine late in the first half before a 3-pointer by Ross and an Elle Dingel bucket made the score 26-22 at halftime.

“We had a lot of momentum, we were playing better,” said Brydges. “We were starting to execute a lot better, start to finish. We missed a lot of easy shots, I think, in the first quarter. Things started clicking, our offense started working, our defense started playing a little bit harder and we were much better in transition.”

Boise took its first lead of the game midway through the third quarter when Ava Oakland hit a 3-pointer to make it 34-32. An Ashley Banks basket early in the fourth quarter made it 44-38 Boise, but the shooting woes returned and the Vikings came back with their late game push.

Skylar Burke finished with 20 points for the Vikings, with 10 of them coming from the free-throw line. Banks led Boise with 15 points, while Ross finished with 12.

Boise will now turn its attention to the consolation championship. The Brave will face Southern Idaho Conference rival Meridian today in the consolation semifinal with a 5 p.m. game at Ridgevue High.

“It’s always a hard three days, especially when you come in having a lot of expectations, hopes and dreams and whatnot,” Brydges said. “I told the kids ‘you can be bummed, but you got to flush it by the time we see you tomorrow morning for shootaround.’”

But Caldwell did just that, shooting 10 for 14, helping to pace the Titans to a 53.2 percent shooting night to take a 66-55 win over the Warriors in the first round of the tournament.

“I just have to give them credit, they were willing to take the shots and they knocked them all down,” said Sells. “We haven’t given up that many points all year, especially with that shooting percentage. But some nights are like that and you have to give credit to the opponent.”

The 66 points were the most given up this season by the Warriors (13-5), and nearly 30 points above their average, which entering the game was the best in Idaho’s 5A classification this season. But behind Caldwell’s big day, the Titans attacked the Warriors like very few have this season.

“It was hard, because they have shooters everywhere,” said Meridian senior Jaleesa Lawrence, who also had a 26-point performance. “They were making everything and we really couldn’t guard that.”

A third-year school making its first appearance at the State Tournament, Thunder Ridge looked every bit like a team that had been on this stage before from the start. Boston University signee Lauren Davenport opened the scoring with a 3-pointer, and Thunder Ridge never gave up the lead.

“I think they just started showing more urgency,” Sells said. “You could see our players getting to the rim more. Not sure it was anything other than that. They knew it was time to make something happen one way or another.”

But the Titans hit a basket at the end of the quarter to make it 47-39 and the Titans answered nearly every Meridian shot in the fourth quarter with one of their own.

Davenport finished with 13 points and nine rebounds for the Titans. Taylor Bonning had 12 points for the Warriors.