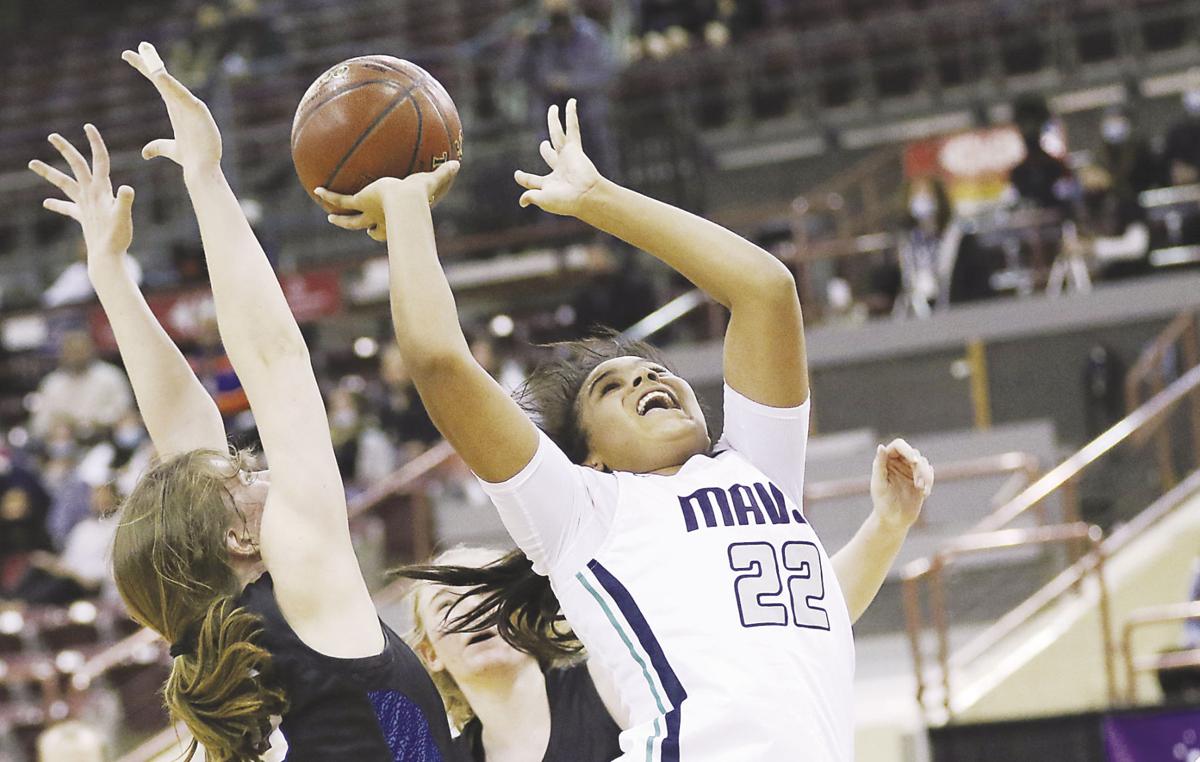 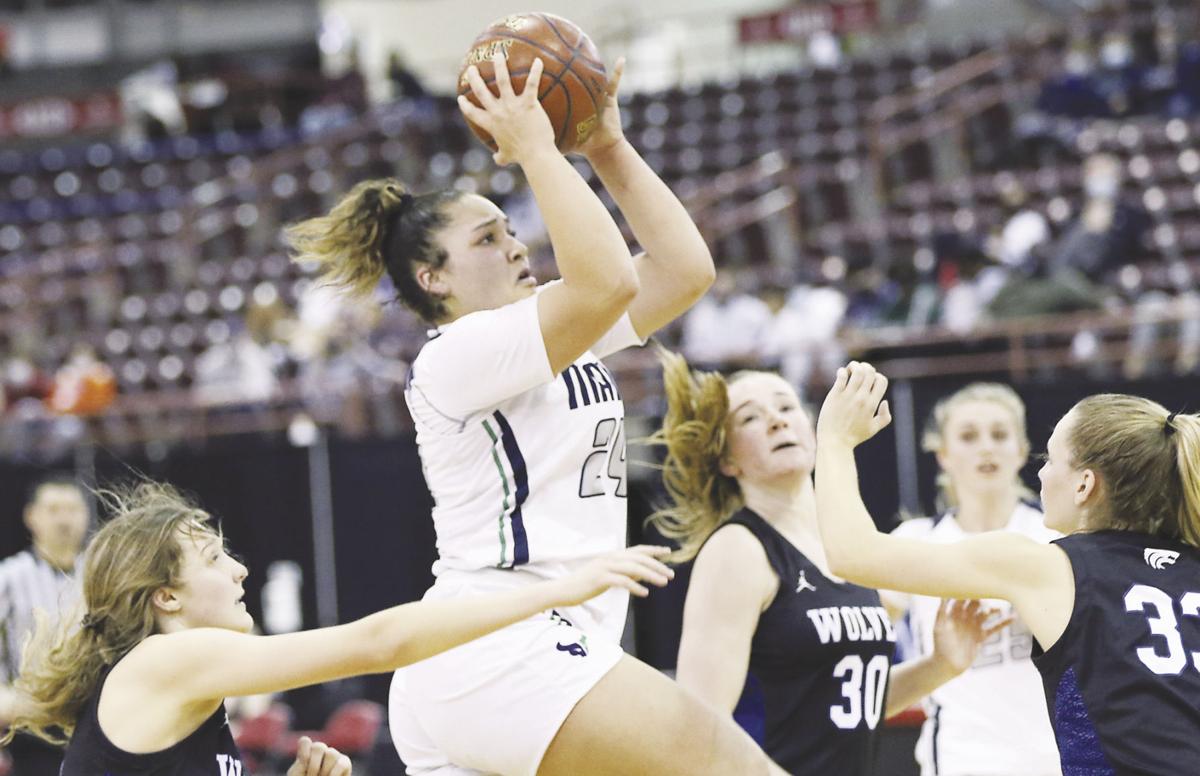 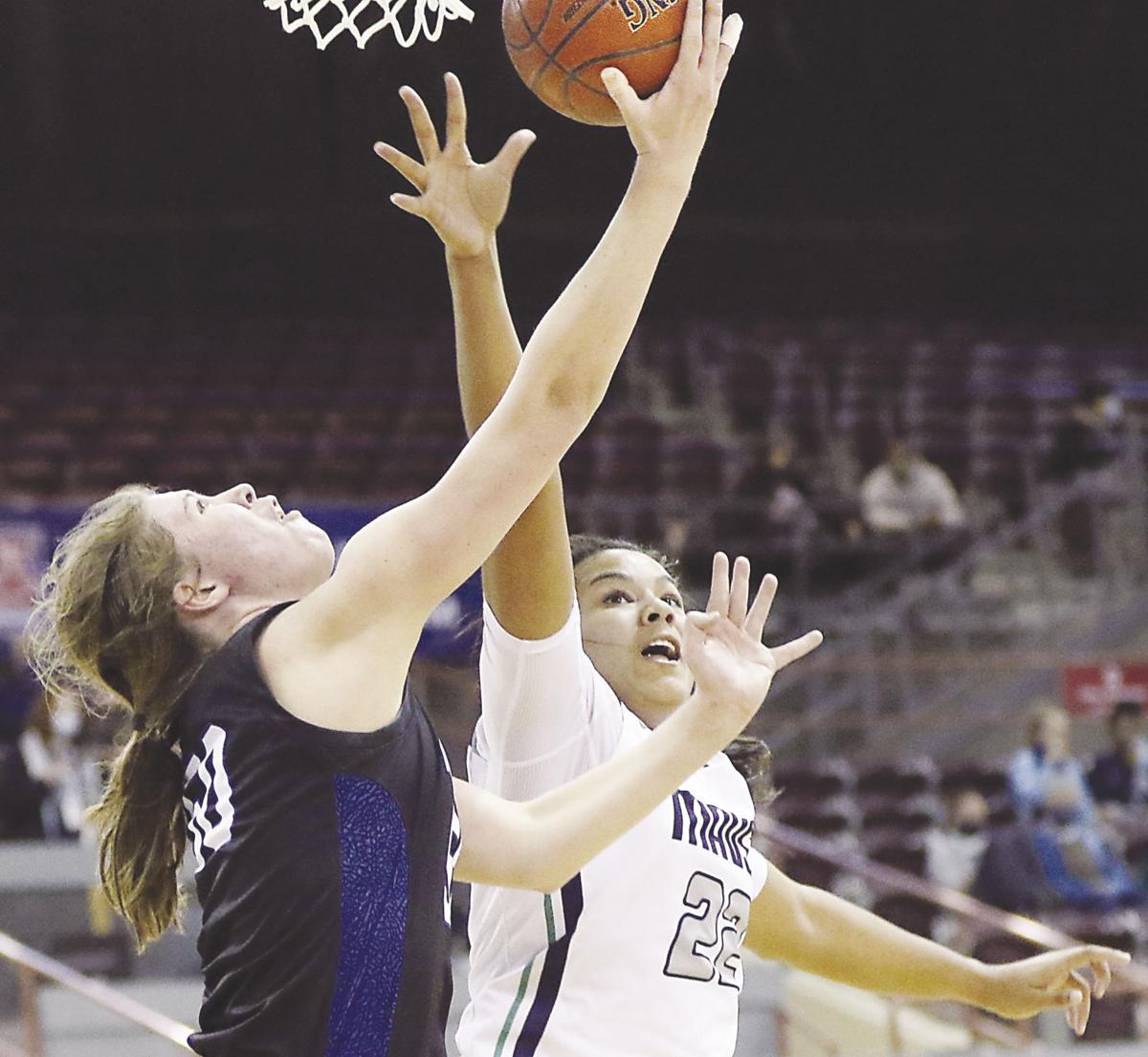 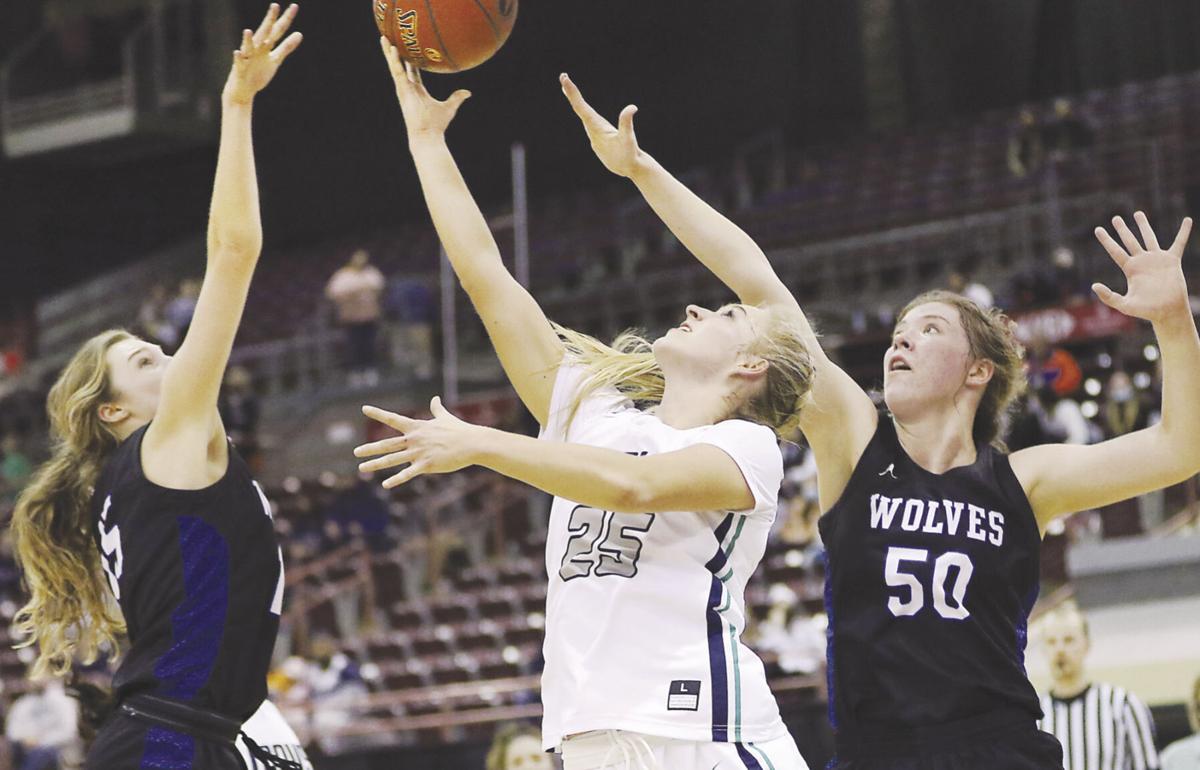 Mountain View’s Millie Brunner (25) delivers a shot through the coverage of Timberline’s Kailey Huegerich (15) and Sophia Glancey (50) during 5A girl’s state basketball action Thursday at the Ford Idaho Center. 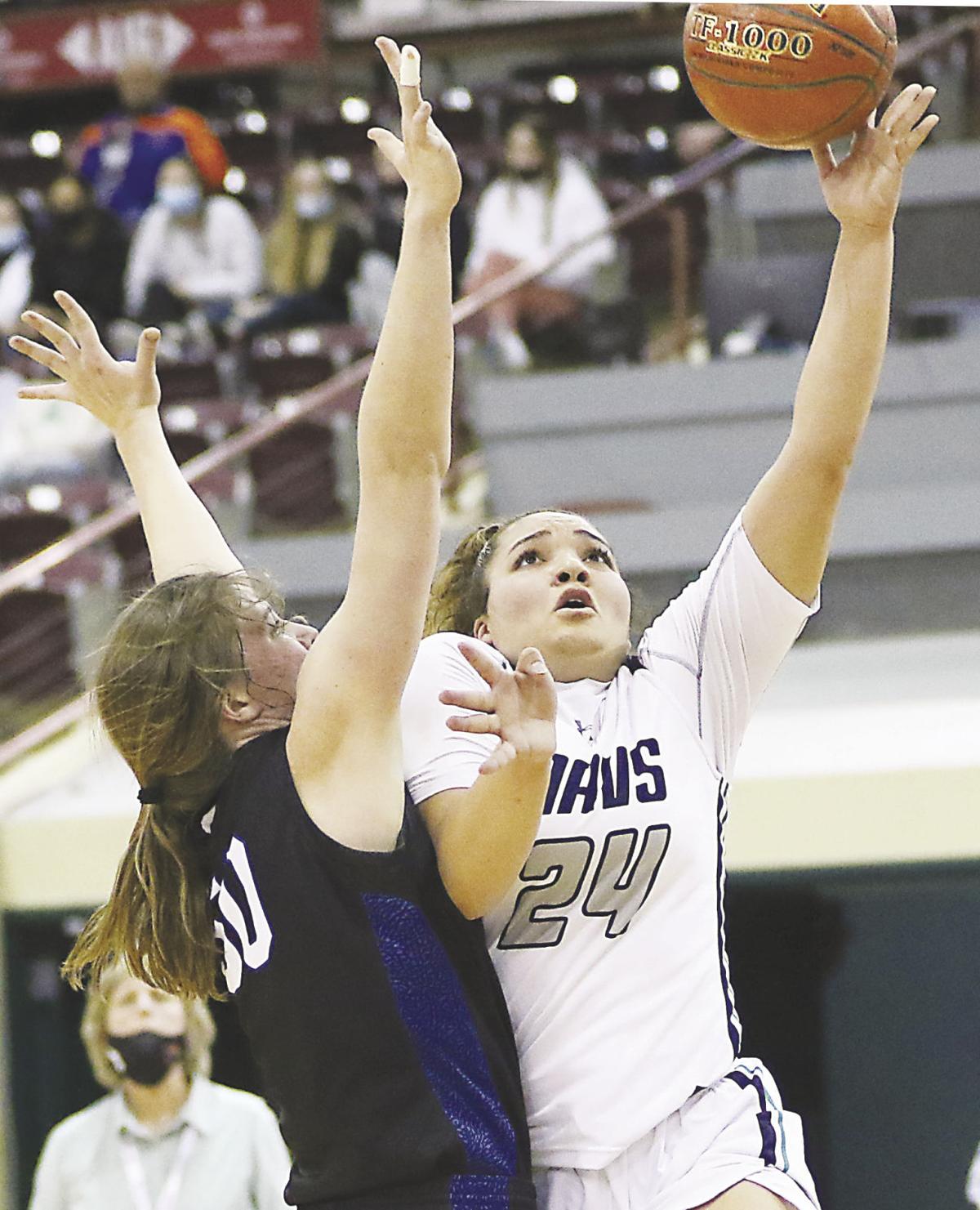 Mountain View’s Trinity Slocum (24) drives past Timberline’s Sophia Glancey (50) to put up a shot during 5A girl’s state basketball action Thursday at the Ford Idaho Center.

Mountain View’s Millie Brunner (25) delivers a shot through the coverage of Timberline’s Kailey Huegerich (15) and Sophia Glancey (50) during 5A girl’s state basketball action Thursday at the Ford Idaho Center.

Mountain View’s Trinity Slocum (24) drives past Timberline’s Sophia Glancey (50) to put up a shot during 5A girl’s state basketball action Thursday at the Ford Idaho Center.

NAMPA — Naya Ojukwu is making a habit of taking over big games in the fourth quarter.

It’s a trend that the Mountain View girls basketball team is just fine with.

The Mavericks’ junior scored 14 points in the closing quarter on Thursday and had a game-high 34 points as Mountain View came from behind in the fourth quarter to take a 65-52 win against 5A Southern Idaho Conference rival Timberline in the first round of the 5A state tournament.

“I just hate to lose,” said Ojukwu, who also pulled down 13 rebounds and blocked three shots. “I started off really rocky in the first half and a little bit in the third quarter before it clicked and I was like ‘Wait, we can’t lose this.’’

Mountain View (18-2) will look to continue its defense of its state title today with a 7 p.m. game against Rigby at the Ford Idaho Center. A win will send the Mavericks to the title game for a third year in a row. As the only Southern Idaho Conference team still playing in the semifinals, the Mavericks are also the conference’s only chance to place at least one team in the title game for an eighth straight season.

It’s hard to blame Skogrand for wanting to capture that energy from the end of the game and bring it back to the Ford Idaho Center for the rest of the tournament. Timberline led 42-41 entering the final quarter, but the Mavericks outscored the Wolves (11-3) 24-10 over the final eight minutes to secure the win.

“I think we were playing complacent until we finally got upset at how we were playing,” said Skogrand. “We were throwing the ball away in the first half with no pressure on us, we were trying to do some stuff and were forcing the ball in. We finally just played basic basketball. We played hard-nosed defense, we got some turnovers, we finished it at the end instead of throwing it away. We just played fundamental basketball again and played like we knew how to play.”

Skogrand credits senior Trinity Slocum with getting angry with her teammates and holding them accountable on the court. Ojukwu said at one point Slocum came up to her and told her to enjoy the moment. Ojukwu said things started turning after that.

“That was the thing we were missing,” Ojukwu said. “Trinity said ‘smile, why aren’t you smiling?’ Because I always smile when I play. I was like ‘you’re right’ and it just came together. Mentally we needed to stitch that on.”

Mountain View took the lead for good with just under four minutes to play when Millie Brunner hit an under-the-basket layup to put the Mavericks ahead 50-48. Slocum added a steal and a fast break basket after that to really get Mountain View’s late game run going.

Ojukwu got a putback basket on a missed Slocum free throw to extend the lead to 55-48 before the Wolves cut the lead back down to three with back-to-back baskets by Sophia Glancey and Audrey Taylor. But Mountain View finished the game on a 10-0 run with Slocum hitting an uncontested layup in the closing seconds to put the exclamation mark on the victory.

“We were lifting each other up because a lot of people were hanging their heads,” Ojukwu said. “Like I had a couple missed baskets where I could have made free throws. People were coming up to each other and we finally had that teamwork and chemistry.”

Slocum finished with 14 points and eight assists for the Mavericks, while D’Nia Williams had 11 points, all of which came in the first half.

Glancey finished with 23 points and nine rebounds for Timberline, which will play Post Falls in a consolation semifinal at 7 p.m. today at Ridgevue High. Taylor scored 17 points.