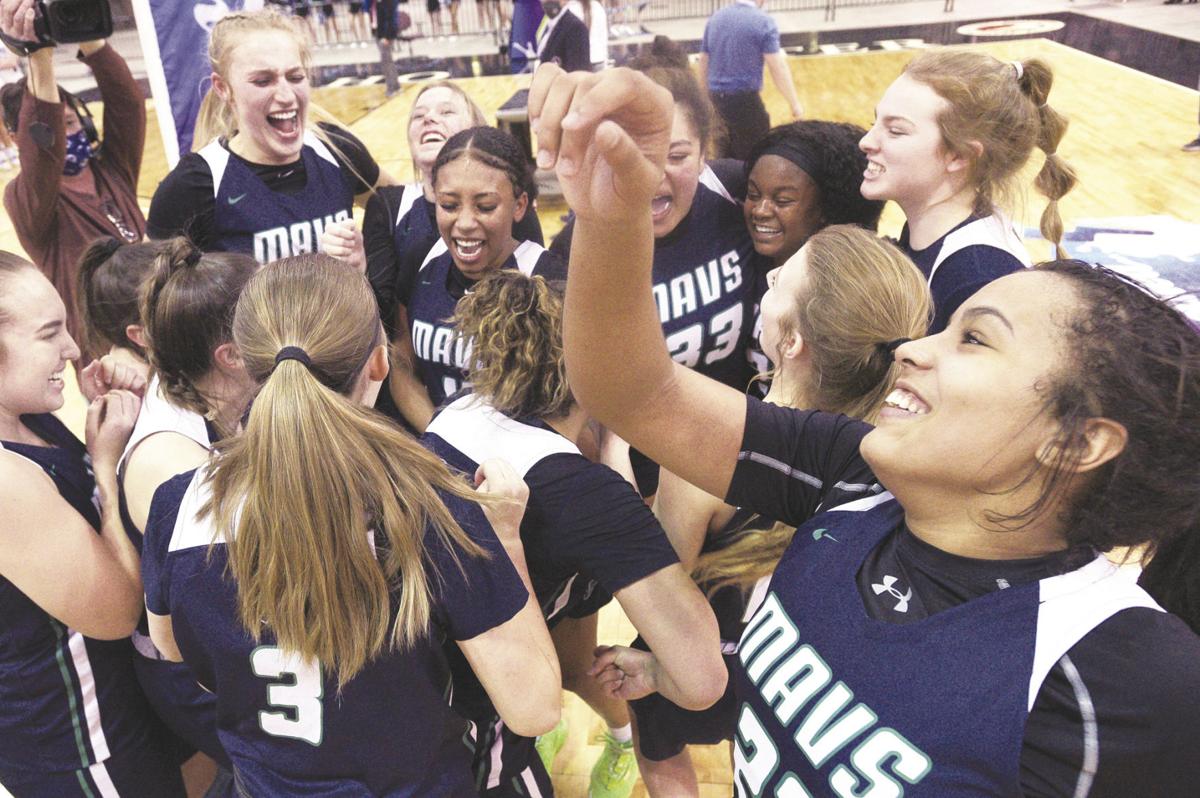 Mountain View power forward Naya Ojuwku (22) celebrates with her teammates after securing a victory over Thunder Ridge to claim the 5A state title Saturday at the Ford Idaho Center. 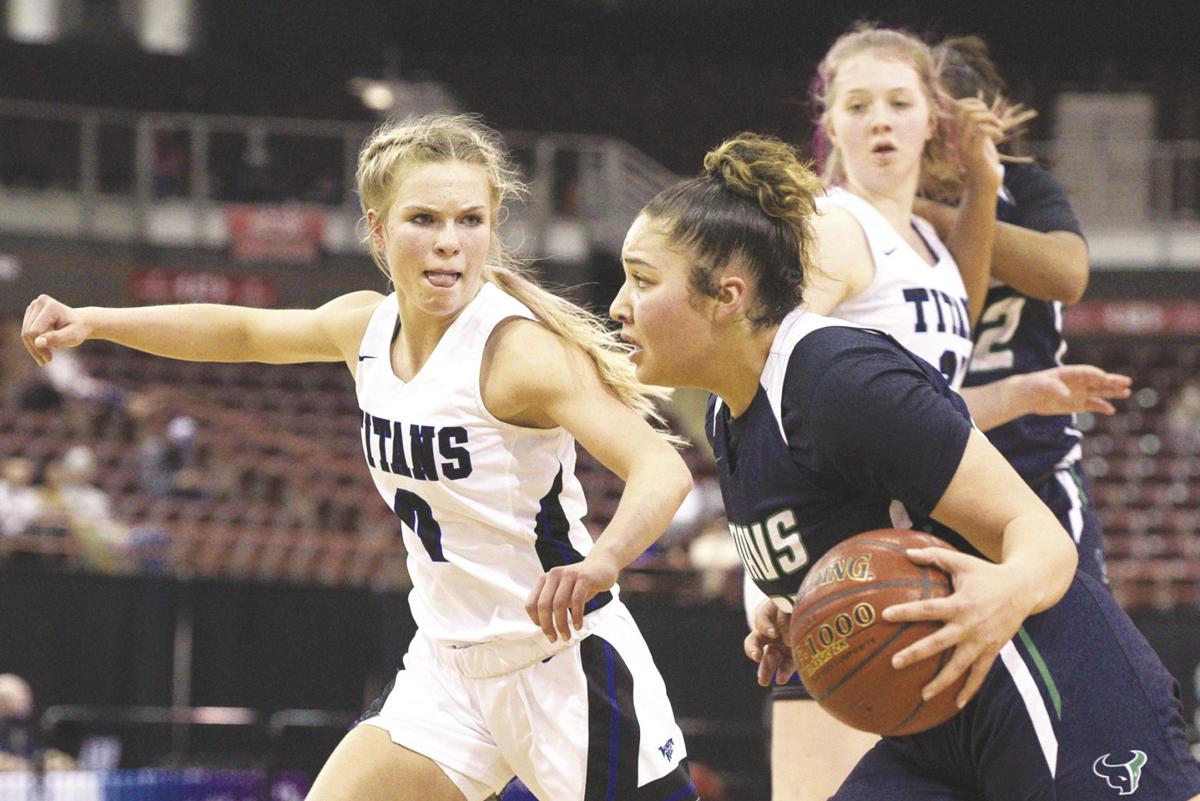 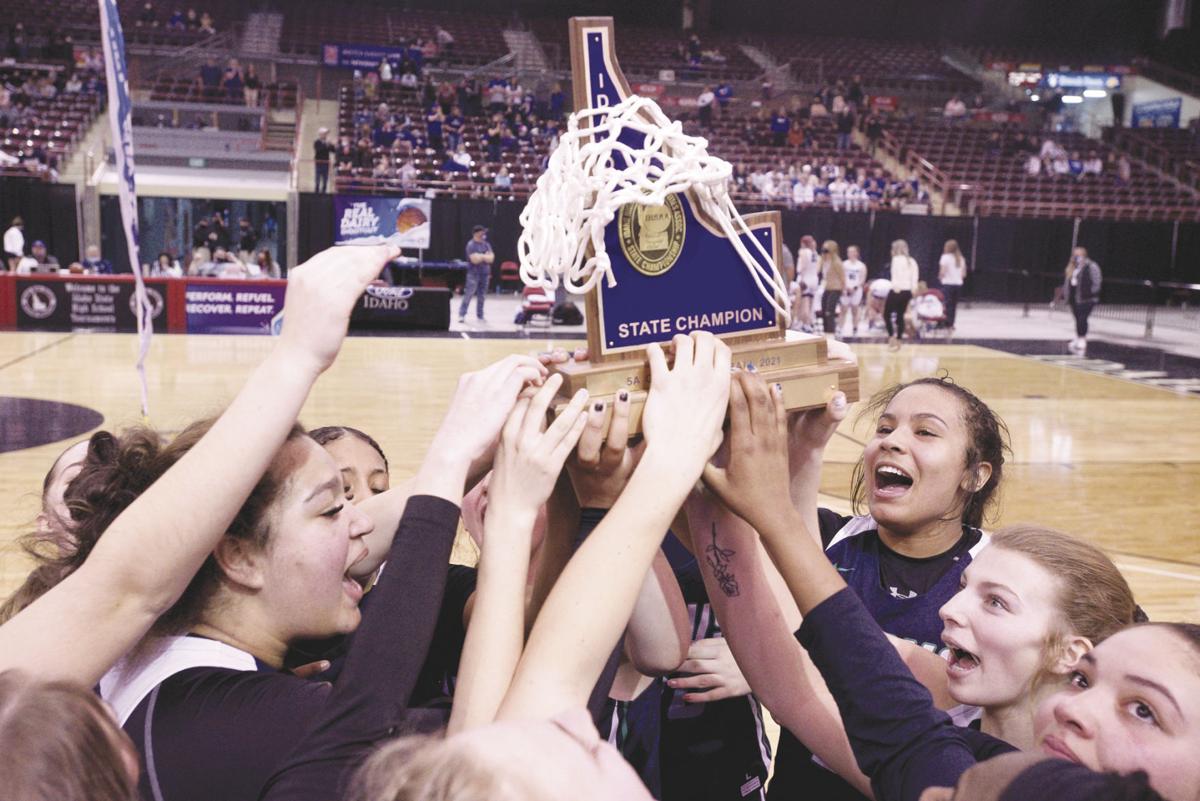 Mountain View girls basketball players celebrate after securing a victory over Thunder Ridge to claim the 5A state title Saturday at the Ford Idaho Center. 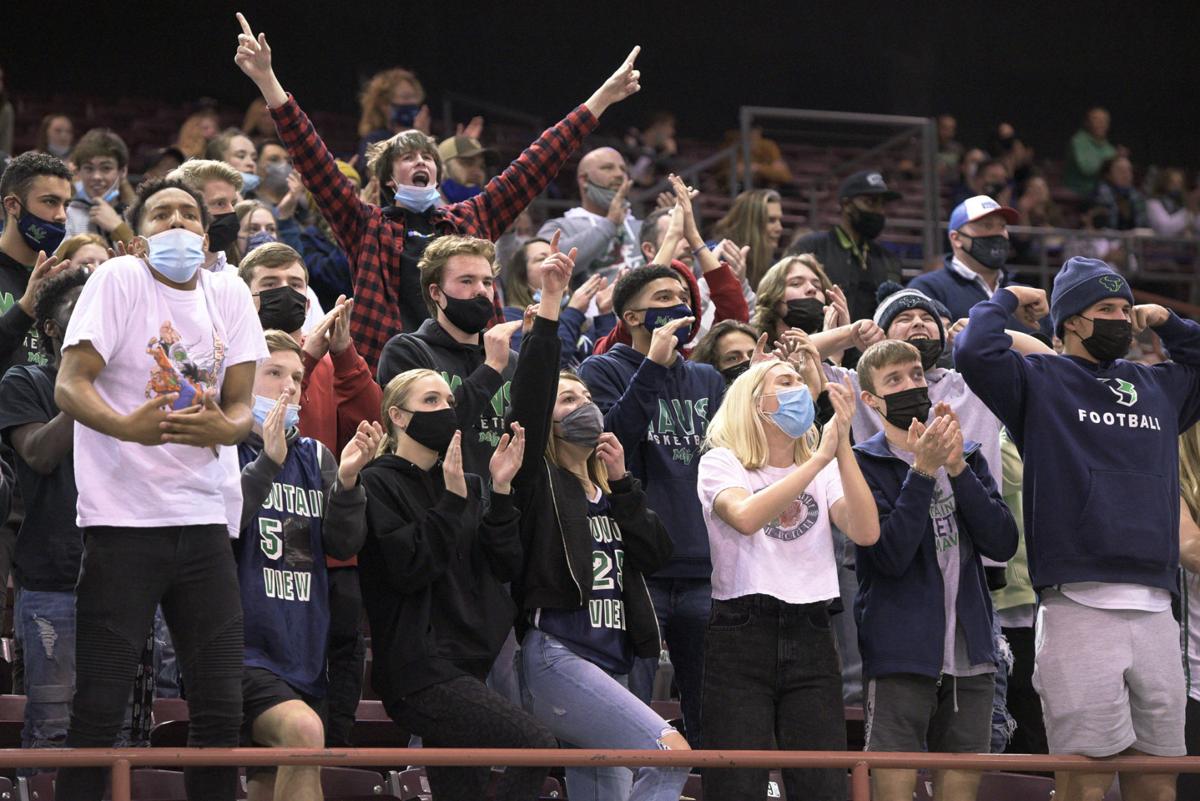 Mountain View students cheer for the girls basketball team during the 5A state championship game against Thunder Ridge Saturday at the Ford Idaho Center.

Mountain View power forward Naya Ojuwku (22) celebrates with her teammates after securing a victory over Thunder Ridge to claim the 5A state title Saturday at the Ford Idaho Center.

Mountain View girls basketball players celebrate after securing a victory over Thunder Ridge to claim the 5A state title Saturday at the Ford Idaho Center.

Mountain View students cheer for the girls basketball team during the 5A state championship game against Thunder Ridge Saturday at the Ford Idaho Center.

NAMPA — Was there really any ever doubt?

Just as the Mountain View girls basketball team was seemingly on the verge of watching its season slip away, things started to click.

Maybe it was the mini-run to end the first half. Maybe it was the halftime speech by coach Connie Skogrand, which by all accounts was very impassioned. Or maybe it was just the will of the Mavericks not to lose and set records along the way.

Whatever it was, it helped Mountain View overcome a 16-point deficit and beat Thunder Ridge 62-55 on Saturday in the 5A State Championship Game.

“I never have a doubt that we would (win) or it wouldn’t be close,” said junior Naya Ojukwu, who scored 32 points and set a 5A State Tournament record with 87 points over the course of three games. “We’re a second half team, I knew we would pull it together.”

The win gives Mountain View its second straight state title and the fourth since 2015. The Mavericks won back-to-back titles in 2015-16 with Destiny Slocum, who is now playing at Arkansas. Her sister, Trinity Slocum, who is signed with Hawaii and wore the same No. 24 jersey as her sister, now has two as well.

“I just kept the legacy going, and that’s what I’m most proud about,” said Trinity Slocum, who finished with 11 points. “I hope the younger generations can keep it going even without the last name or the number.”

D’Nia Williams finished with 15 points, hitting five 3-pointers. That gave her 13 for the tournament, breaking the record of 12 set by Eagle’s Meghan Boyd in 2019. Ojukwu also tied a tournament record with 33 field goals during the three-days at the Ford Idaho Center, and while the Idaho High School Activities Association doesn’t keep track of records for rebounds, she had 40 of them throughout the tournament.

She broke the scoring record of 85, set by Destiny Slocum in 2016, on a layup with 11 seconds left. Ojukwu was completely unaware she set the record until after the trophy presentation.

“My freshman year that was one of my goals,” said Ojukwu. “I looked up to (Destiny Slocum) so much, I went to the games and stuff and freshman year I was like ‘I love her, but I’m going to break her records.’ So it feels nice.”

The effort helped the Mavericks (20-2) overcome a 33-17 deficit in the first half. Mountain View found itself behind and in foul trouble after Ojukwu picked up her first foul in the opening minute and her second just six minutes into the game. Midway through the second quarter, Williams picked up her third foul on a defensive play in the back court.

“We were playing that game of fouls and running them in and out,” said Skogrand. “When kids get fouls early, they’re playing tentative. They’re not paying assertive. So, at halftime they just had to go for it.”

Slocum and Ojukwu hit back-to-back buckets to end the first half and cut the lead to 33-21. In the locker room, Skogrand let her players have it, telling them they needed to show more hustle.

“I know some of the girls were like ‘dang,’” Williams said about the speech. “Because Sko never really yells. But today she was going in on us. She was like ‘you better get your crap together and win this game.’ She was not happy, but we definitely needed it because that was a big wake up call.”

The third quarter was a completely different story. Mountain View outscored the Titans 24-7 over the course of those eight minutes, including a 20-2 run to end the quarter and take a 45-40 lead into the final period.

The Mavericks took the lead with back-to-back-to-back 3-pointers with Slocum hitting one to tie the game at 38-all sandwiched between two 3-pointers by Williams.

“We’ve been in a bigger deficit before,” said Williams. "We knew if we really played like a team and played the way we knew how to play, we were coming back and we were going to get that championship.”

Mountain View led by as much as 56-45 with about five minutes left, but Thunder Ridge had one more push. The Titans cut it to 56-54 with a 9-0 run capped by a 3-pointer from Kennedy Stenquist with two minutes left. But Ojukwu ended the run with a basket, Slocum hit two free throws with 27 seconds left and Ojukwu put the finishing touches on things with her record-breaking layup.

“I think it was the feeling of being down,” Slocum said about the late game push. “Especially our captains and our veterans, we’ve won the championship game and we lost it. There’s one of those feelings we do not like. So when you’re down, all you got to do is put your heads up and put the ball in the hoop.”

The Mavericks lose both Slocum and Williams, as well as starter Millie Brunner, who finished with four points. But they figure to be the favorites to repeat for a third straight year next season with the return of Ojukwu, an already heavily recruited player who did nothing but help raise her recruiting profile even higher with her performance in the tournament.

“We’ve got some good underclassmen coming up,” said Ojukwu. “So, watch out for us.”

BOISE 52, TIMBERLINE 41: The Brave used a big second quarter to build a cushion in the consolation championship.

Rigby led by as many as 12 points.