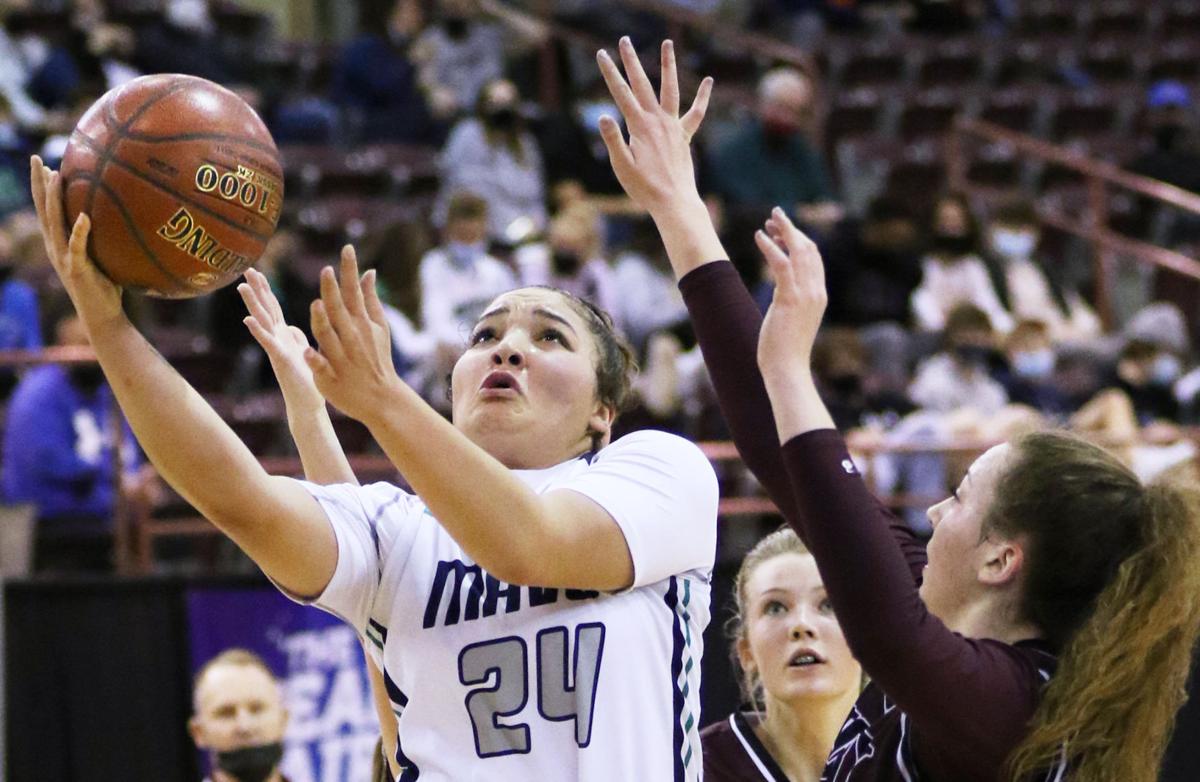 Mountain View's Trinity Slocum (24) serves up a shot against Rigby during 5A girls basketball action at the Ford Idaho Center on Friday. 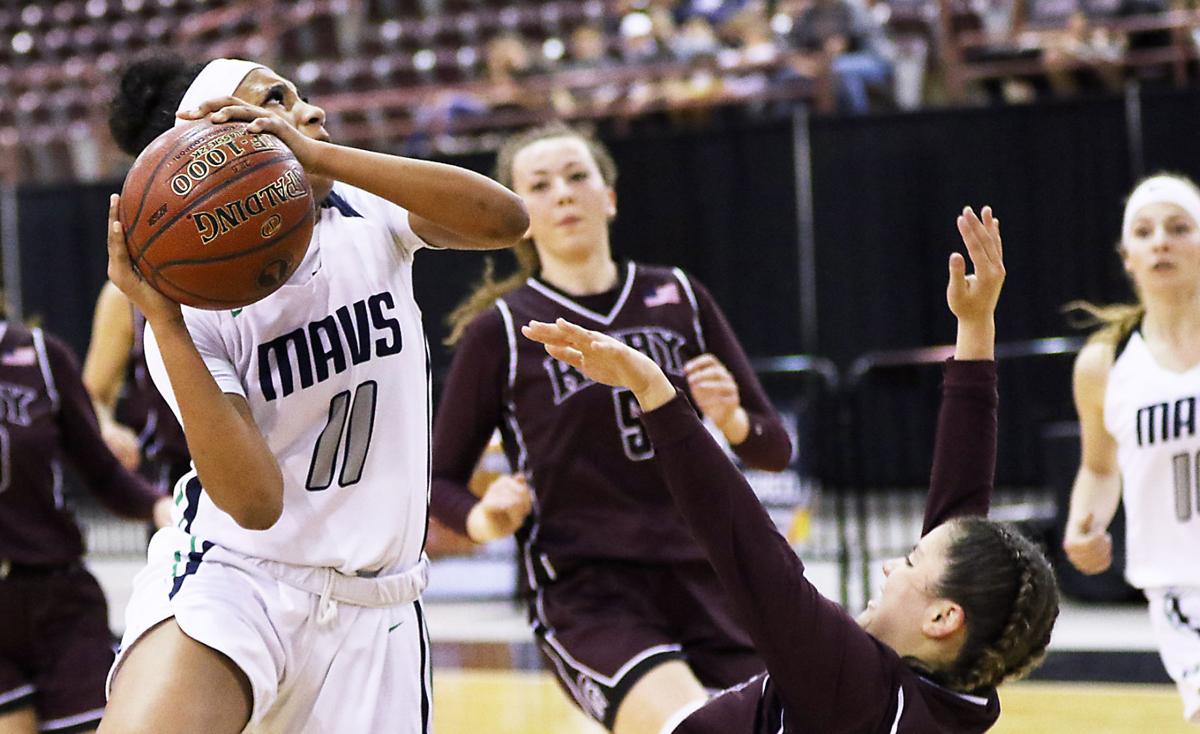 Mountain View guard Demi Thompson (11) drives hard to the basket against Rigby during 5A girls basketball action at the Ford Idaho Center on Friday. 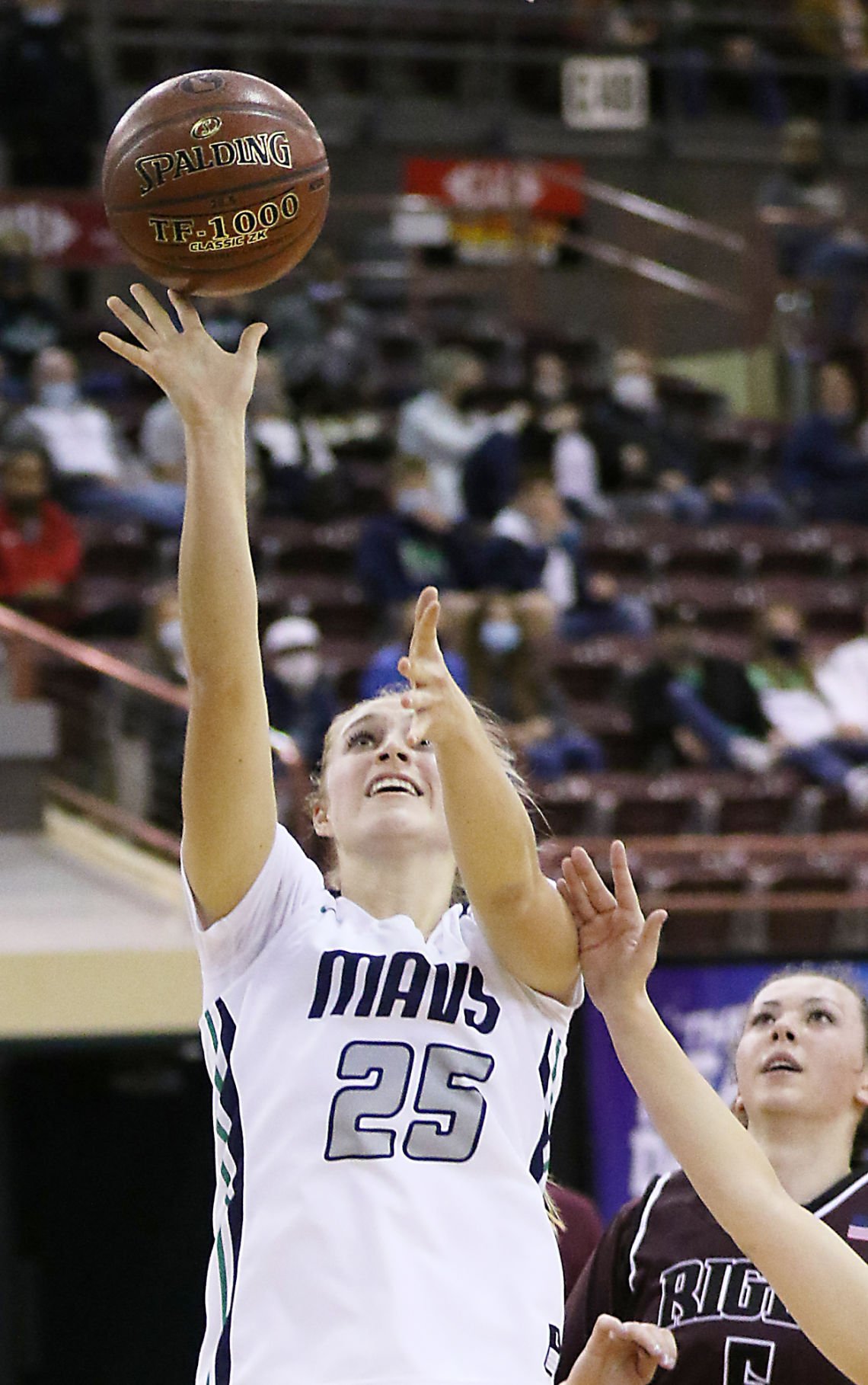 Mountain View's Trinity Slocum (24) serves up a shot against Rigby during 5A girls basketball action at the Ford Idaho Center on Friday.

Mountain View guard Demi Thompson (11) drives hard to the basket against Rigby during 5A girls basketball action at the Ford Idaho Center on Friday.

NAMPA — There's a reason the Mountain View girls basketball team is one win away from claiming its status as the best team in the state for a second year in a row.

That reason is an emphasis on the word team.

The Mavericks got scoring production from all over the court on Friday as they jumped out to a big lead in the first half of the 5A state semifinals before taking a 73-64 win against Rigby.

“I feel like we just flowed today,” said senior D’Nia Williams, who hit five 3-pointers and was one of five Mavericks to score in double figures, with 15 points. “We were just like ‘you’re open, we got you.’ We just believe in our teammates and we believe in their abilities. When they’re on, they’re on.”

Mountain View (19-2) advances to the 5A State Championship Game for the third straight year and will look to defend its crown when it takes on Thunder Ridge at 7 p.m. today at the Ford Idaho Center.

A win will also give Mountain View its fourth state title, as the Mavericks won back-to-back titles in 2015-16.

“I’m just excited to play with my friends one more time,” said junior Naya Ojukwu. “A lot of them, it’s their senior year, so hopefully we can get another back-to-back.

The semifinal win was different in nearly every way from the Mavericks 65-52 win against Timberline in Thursday’s opening round. In that game, Ojukwu had 34 points, including 14 in the final quarter. On Friday she was held to a modest 21 points, to go with 11 rebounds, playing much of the second half in foul trouble before fouling out with three minutes left.

After her 21 and Williams’ 15, Trinity Slocum and Sierra Grizzle both scored 12, while Millie Brunner had 10.

“I think it goes back to our team defense,” said Mountain View coach Connie Skogrand. “When everybody gets to the ball on team defense, and we’re getting the ball up the floor and getting some easier transitional shots, that it makes it so much easier on everyone, including Naya. So, it’s just getting up and down the floor.”

The other big difference from Thursday: The flow of the game. Mountain View trailed Timberline entering the fourth quarter of their opener and rallied with a 24-10 scoring advantage in the final eight minutes. There was no comeback needed on Friday.

Williams opened the game with a 3-pointer, and the Mavericks jumped out to a 16-1 lead.

“We started with the energy, which was what I wanted them to do,” said Skogrand. “When we play that way, good things happened. And that’s happened all year long when we’ve played like that.”

The energy continued into the second quarter as a Grizzle 3-pointer sparked a 10-0 run to extend the lead to 27-6. The Mavericks took a 39-15 lead into halftime.

“When we were scouting them, we knew we had to play amazing defense,” said Williams. “And we did everything we talked about this morning.”

Mountain View extended its lead as much as 69-41 with about four minutes to go. Rigby did all it could to get back into the game, including a 15-0 run to close the game and cut the gap to single digits. But the lead the Mavericks had built was far too large to overcome and the Mavericks advanced back to the title game, a summit that has become the expectation in the program in recent years.

THUNDER RIDGE 53, COEUR D’ALENE 39: A day after torching the state’s top 5A defense, Thunder Ridge shut down the top offense.

Now the third-year school will go up against the defending champions for the 5A State Title.

Sierra John had 12 points for Thunder Ridge, while Lauren Davenport and Aspen Caldwell, who had 26 points in Thursday’s 66-55 win over Meridian, both finished with 11.

The Titans led 18-13 at halftime and started building distance between themselves and the Vikings in the third quarter. A basket by Paige Clark sparked a 6-0 run to begin the half, extending the lead to 24-13. Davenport hit a 3-pointer to and it 29-17 and after Coeur d’Alene answered with a Skyler Burke 3-pointer, Marley Spencer hit one on the other end to extend the lead back to 12.

After scoring 22 points through the first three quarters, the Vikings had 17 in the fourth, but the Titans’ lead proved too much to overcome.

Jaelyn Brainard-Adams had 10 points for Coeur d’Alene, whose only two losses this season have come against Thunder Ridge. The Titans won 69-63 when they hosted the Vikings on Dec. 29.

CONSOLATION: Boise and Timberline will face off in the consolation final today.