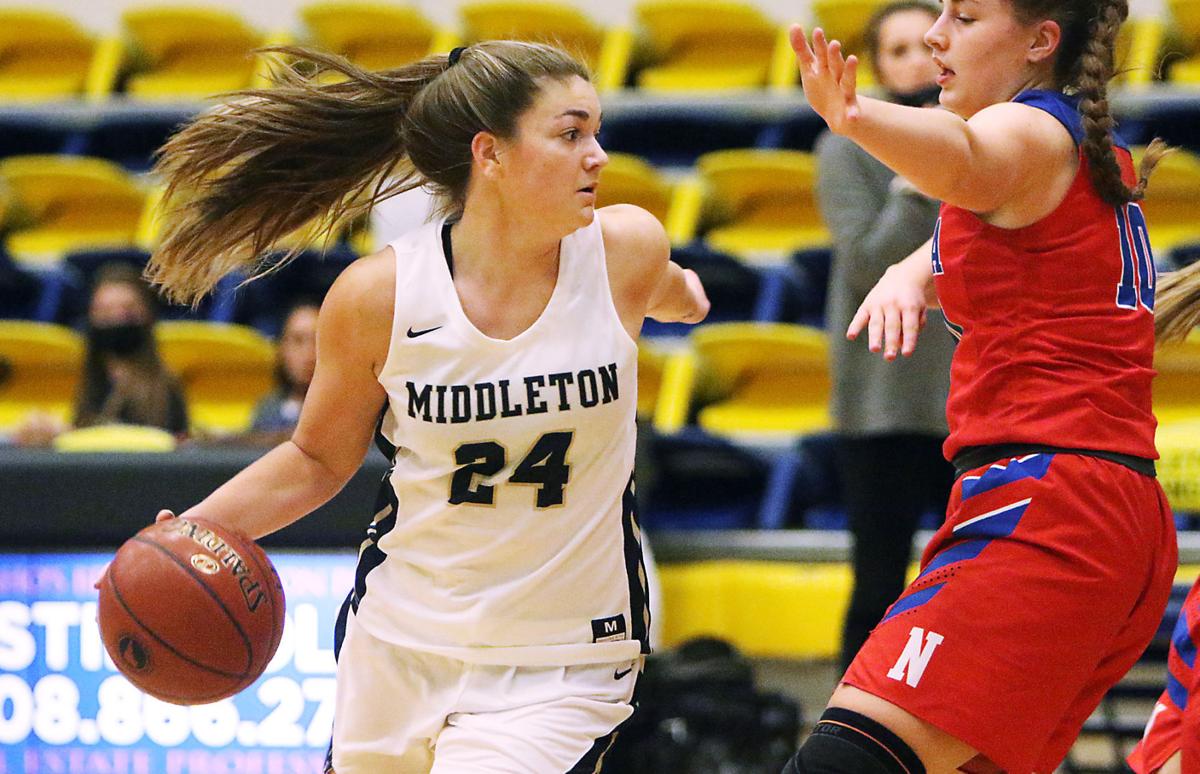 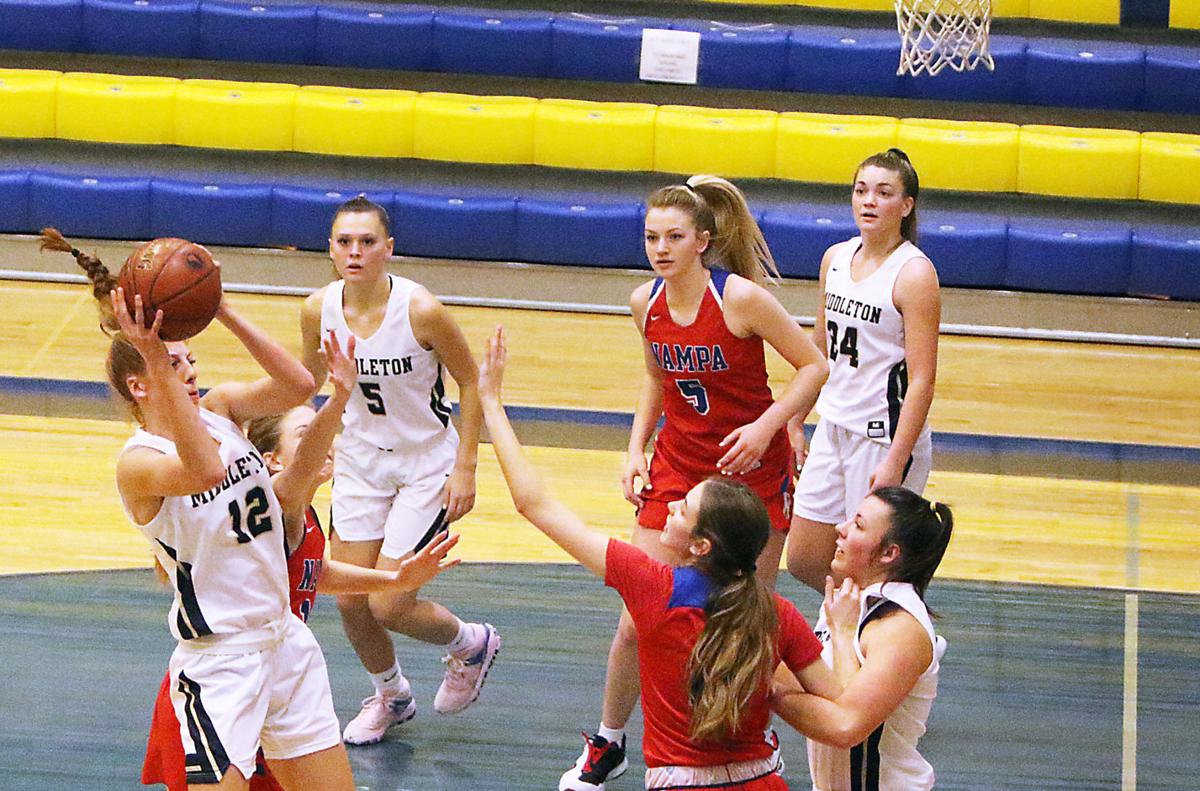 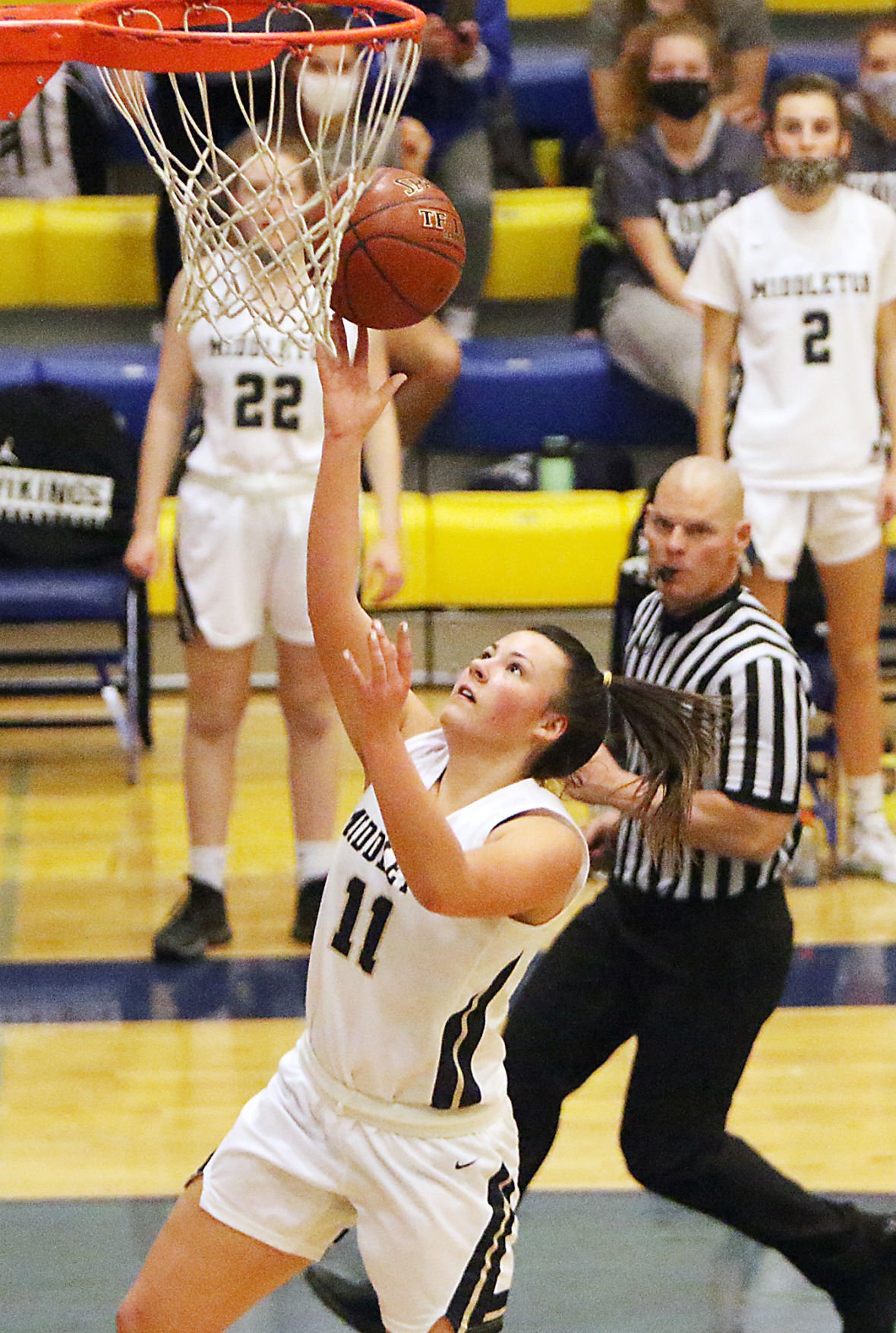 Energy kept the Vikings rolling Thursday, as Middleton beat Nampa 47-32, the sixth straight double-digit victory to start the season for the Vikings (6-0, 4-0 4A Southern Idaho Conference).

Nampa (6-2, 1-1) had come in hoping to challenge Middleton, which has won at least a share of the last four conference titles. The 15-point margin of victory was the smallest so far this season for the Vikings, who had won their first five games by an average of 33 points. But Middleton’s duo of juniors Payton Hymas and Casidy Fried — who combined to score 34 points — and a strong Viking defense proved too much to overcome.

“I think it gives us more motivation,” said Fried, who had a monster game with 16 points and 16 rebounds. “We’re are kind of top dogs right now, so we can keep pushing forward and just keep our energy climbing uphill.”

The Vikings certainly weren’t lacking any energy throughout the game and even long after the final buzzer. After a loud jubilant postgame celebration in the locker room, players ran out of the locker room with jumping and cheering as if this were a district or state tournament game, not a regular-season game.

“We have so much energy as a team,” said Hymas, who had a game-high 18 points. “We super close as individuals on and off the court, we do everything together. And that’s what motivates us.”

That energy showed after Nampa took an 11-4 lead midway through the first quarter, with Ashlyn Nichols picking up seven early points for the Bulldogs. Fried had a basket and free throw, then another field goal to end the first quarter with the final five points, cutting Nampa’s lead to 11-9.

It was all Middleton from there.

“They’re probably the best team that we’ve played so far,” said Fried. “So I think it took us a little bit to get our mojo going and realizing ‘yeah, we got this and if we’re going to beat this team we got to bring the energy and unite the team as a family.’”

Reesa Whitworth got things going for Middleton in the second quarter with an early 3-pointer and the Vikings scored the first nine points, holding Nampa without a field goal the entire period. A single free throw by Nichols provided Nampa with its only point of the quarter as Middleton took a 21-12 lead into halftime.

“We knew we had to weather the storm, they’re going to come out firing, they’re going to come out playing well,” Middleton coach Trent Harrison said. “But we practice being down eight all the time. We play scrimmages where a turnover is minus 2 (points) or you give them an offensive rebound it’s minus 1. ... So our girls, when they look at the scoreboard they go ‘I’m not playing any different. I’m going to make my adjustments and I’m going to continue to do what I can defensively with the role that my coach set for me before the game started.’”

Hymas, Fried and Whitworth, who finished with five points, were the only three players to score for Middleton in the first half. Sheridan Mortensen got on the board with a free throw in the third, extending Middleton’s lead to 28-16. Emma Kraupp, Kate Wilson and Macy McPherson each scored after for Middleton, with Kraupp’s three points being the highest of the four players who didn’t score in the first half.

Of course, Fried said, that continued effort came from the energy she got from her teammates.

“I think it really helps when our bench is so hype and everyone on the court is so excited for each other,” said Fried. “That just builds me up, it builds everyone else up and it really gives us momentum.”