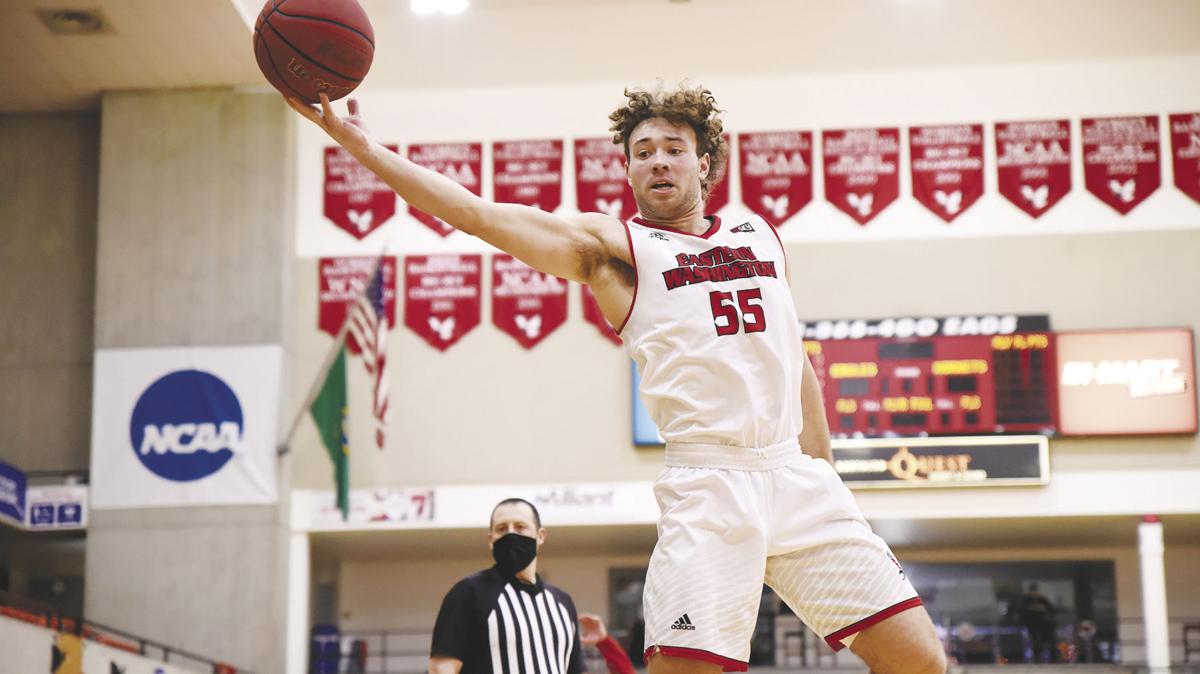 Borah High graduate Ellis Magnuson pulls down a rebound for Eastern Washington during a game against Sacramento State on Jan. 31. 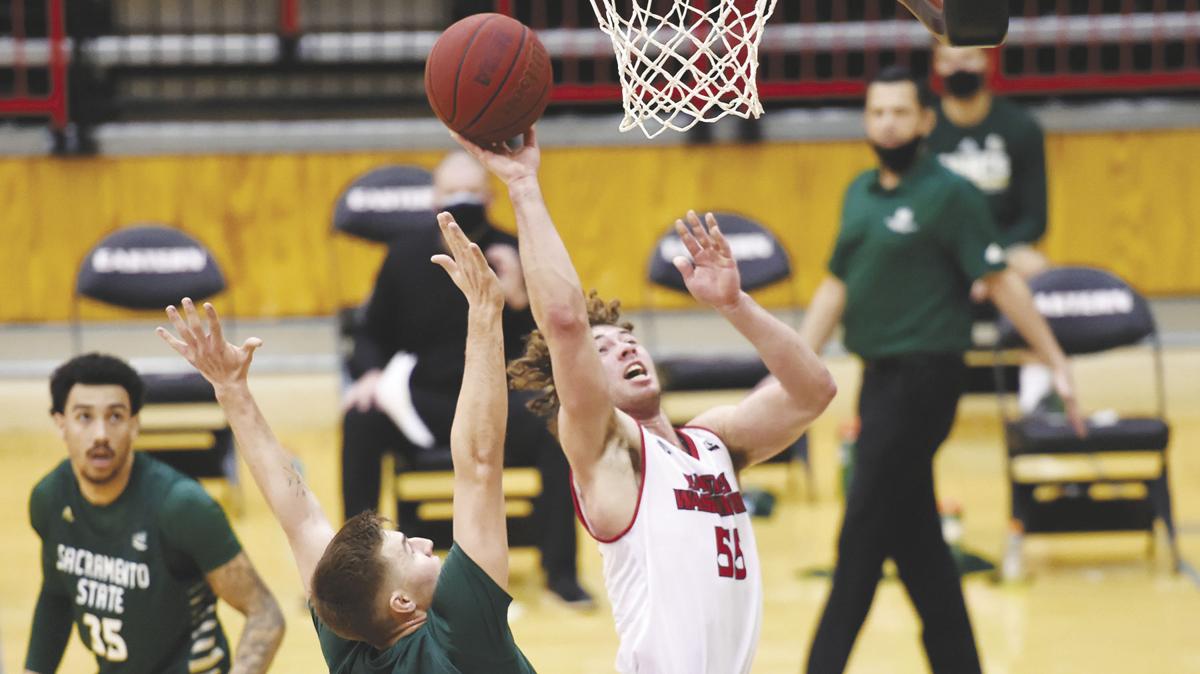 Borah High graduate Ellis Magnuson goes up for a shot during Eastern Washington's game against Sacramento State on Jan. 31. 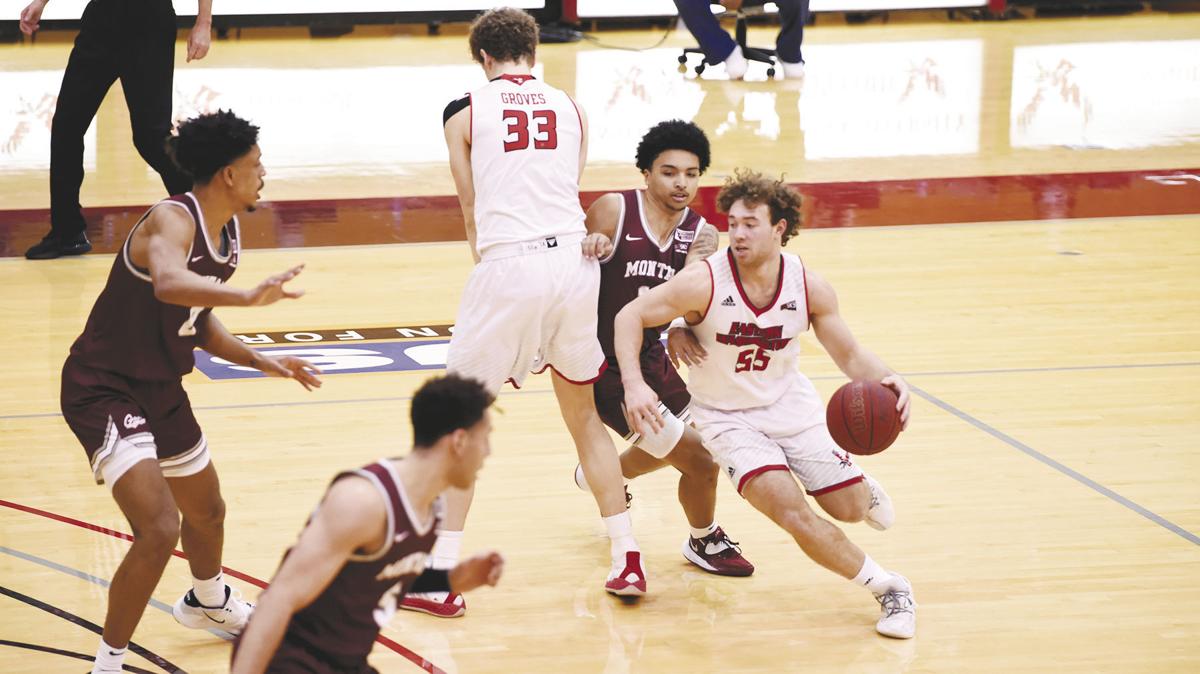 Eastern Washington's Ellis Magnuson drives around a Montana defense during a game on Feb. 18.

Borah High graduate Ellis Magnuson pulls down a rebound for Eastern Washington during a game against Sacramento State on Jan. 31.

Borah High graduate Ellis Magnuson goes up for a shot during Eastern Washington's game against Sacramento State on Jan. 31.

Eastern Washington's Ellis Magnuson drives around a Montana defense during a game on Feb. 18.

Unlike many of his Eastern Washington teammates, Ellis Magnuson admits that he didn’t grow up dreaming of playing in the NCAA men’s basketball tournament.

Sure, the Borah High graduate would watch the games, but until his senior year of high school, Magnuson said he had his dreams set on continuing his football career in college. Basketball was always a second option.

It wasn’t until his freshman year of college that Magnuson really started grasping just how big of a deal making the tournament was. Now as a sophomore, he gets to experience that moment. Magnuson is in Indianapolis this week as Eastern Washington comes into the tournament as a No. 14 seed. The Eagles (16-7) will open the tournament at 11:15 a.m. MDT on Saturday with a first-round game against Kansas at Indiana Farmers Coliseum, one of six venues in Indiana that will be hosting tournament games.

And after two years of playing college basketball, Magnuson is able to appreciate what the moment truly means.

“This is the end goal of every team, whether you’re at a mid-major, like me, or if you’re in a Pac-12 school, or even like a Kansas who we’re playing now,” said Magnuson. “Every team wants to get to this position that we’re at. It’s a cool feeling, knowing that we’re finally at the tournament, the Big Dance that everyone wants to get to. It’s a special opportunity that many people don’t get to do in their lifetime.”

After breaking into the starting lineup as a freshman, Magnuson has seen his minutes decrease this season, as he’s started just 13 games of the 21 he’s played in this year. While he was one of four Eagles to start in at least 30 of the 31 games Eastern Washington played in last year, the Eagles have done more shifting of their lineups this year. Nine different players have started at least five games, with Big Sky regular season and tournament MVP Tanner Groves and Kim Aiken being the only two who have started all 23 games.

But that changing lineup isn’t a detriment to the Eagles, Magnuson said. Rather, it plays to their strength.

“I think one thing that’s great about our team is we’re deep and everyone on our team is really good and capable of playing,” said Magnuson, who is averaging 3.8 points and 16.3 minutes per game and is third on the team with 44 assists. “I think everyone realizes that. So, if one person has a bad game, maybe, and some person is playing more than the other, they’re cheering for that person. That’s what makes our team really good, it doesn't matter who plays. It switches a lot. So, it’s really important that we’re able to keep each other up and just be happy for the next person to go in there and play hard. We know everyone’s got our back.”

That support has been really beneficial this season as college basketball players around the country have had to be mindful of the COVID-19 pandemic. Since the season started, Magnuson said his days have consisted of waking up early for workouts and practices, taking the required COVID-19 tests so he could be cleared to play and attending online classes.

Because classes were online, and walking to class was not necessary, he said there was a little more free time. But because the team had limited interaction outside its bubble, there wasn’t a whole lot he was able to do with it.

The NCAA bubble, he said, is even stricter.

Once teams arrived in Indianapolis, they were escorted to their hotels. Upon arrival, players tested and then tested again the following morning. Until two negative tests came back, players otherwise remained in their hotel rooms.

“Once everything is safe, you can’t go outside the hotel and no one from outside the hotel can come back in here,” said Magnuson. “You’re really cut off from the outside. You’re only here with the other teams, and that’s about it.”

Magnuson said he spent his two days in his hotel room talking with family and friends and watching film of Kansas as he prepared for Saturday’s game.

Teams in the tournament will be staying in the bubble until they are eliminated. And while the Eagles were 10.5-point underdogs to the Jayhawks as of Thursday morning, the Boise native is hoping Eastern Washington can have an extended stay inside the bubble.

“We’re not coming here just to be here,” Magnuson said. “We want to win games and win as many as we can. It’s great that we got here, that was our goal. But at the same time, we want to win. We’re competitors, so we just got to focus up for this game and try to win this one.”

A look at other teams in the NCAA Tournament that have a Treasure Valley connection. This list only includes connections that the Idaho Press is aware of.

Clay Moser, who was a CEO and general manager of the Idaho Stampede from 1997-2001, is an assistant coach for the Razorbacks.

The Cougars have a pair of former Rocky Mountain players on their roster in junior Colby Lee and freshman Townsend Tripple.

Director of Operations Jake Ness is a former Boise State player and was a member of the Broncos' NCAA Tournament teams in 2013 and '15.

Adonis Arms transferred to Winthrop from Northwest Nazarene after being named the 2018-19 GNAC Player of the Year.

Senior Destiny Slocum is a Mountain View High graduate. It’s the third school she has played with in the tournament, having gone to the Sweet 16 with Maryland and Oregon State.

Kuna High graduate Mike Shreeve is a graduate assistant for the Cougars.

Assistant coach Brian Holsinger was the head coach at Northwest Nazarene for two months before taking the assistant coach job with the Beavers prior to the 2016-17 season. He never coached a game with NNU.