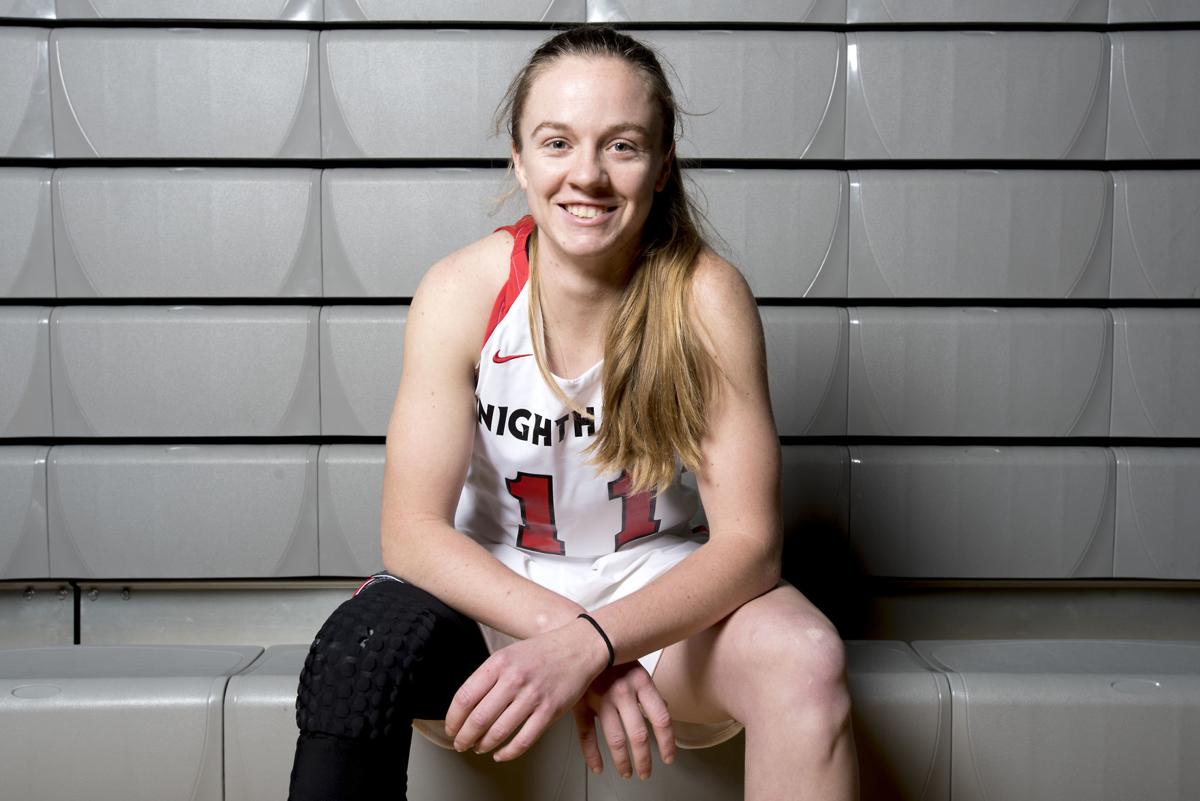 Northwest Nazarene guard Ellie Logan (11) is returning for her senior season following an ACL injury which sidelined her all last season.

Northwest Nazarene guard Ellie Logan (11) goes in for a layin shot against Saint Martin's on Jan. 28, 2017.

Northwest Nazarene guard Ellie Logan (11) is returning for her senior season following an ACL injury which sidelined her all last season.

Northwest Nazarene guard Ellie Logan (11) goes in for a layin shot against Saint Martin's on Jan. 28, 2017.

NAMPA — To a person, there was one player that everyone on last season’s Northwest Nazarene women’s basketball team gave credit to for being an emotional leader.

But while Ellie Logan was doing all she could to help the Nighthawks, she had to do it from the sidelines. She wasn’t on the court for the 13-game winning streak. She sat on the bench as Northwest Nazarene won its first-ever GNAC regular season title. She watched as the three seniors — Lexi Tubbs, Coco Gall and Kaitlyn Merritt — became a feel-good story, going from a seven-win freshman year to three coaching changes in the span of a few months to historical highs, knowing she should have been the fourth.

But through it all, Logan never complained. She never let herself get low. And now that she’s back as a fifth-year senior, she’s helping to build upon what last year’s team started.

“Last year was really a blessing in disguise, because I was just able to sit back and watch the three other seniors go out on a high note,” said Logan, who is second on the team with 10.8 points per game and second in rebounds with 5.6 per game. “After all that we’ve been through freshman and sophomore year, it was just a joy to get to watch them go out loving the game having the year that we had.”

But as special as last season was for last year’s seniors, Logan looks to be in position to surpass them. Entering tonight’s 5:15 game against Seattle Pacific, the Nighthawks have a 12-0 record, the best start in school history, including a 4-0 GNAC record. Northwest Nazarene is the No. 3-ranked team in the nation in the latest NCAA Division II D2SIDA Poll, in which the Nighthawks received one first-place vote.

“We have the fortune of having a part of that great senior class from last year back for this year,” said Northwest Nazarene coach Steve Steele. “It’s like getting a second senior season out of her, which who gets that? Obviously we didn’t have her on the court last year, but she was amazing off the court. Then you add that to her being on the court this year.”

Logan and the Nighthawks came into the 2017-18 season looking to improve upon a 12-15 record in Steele’s first season. With some stability in the offseason following the turmoil of all the coaching changes the season before, things seemed to be looking up.

“I knew how talented we were and we had that year to get used to Coach Steele and adjust to his program,” Logan said. “The seniors and the leadership that we had, we were set to have a great year from the start.”

But during a preseason practice in September, the season came crashing down on her. She jumped up to grab a rebound. When she came down, her right knee buckled. She immediately knew it was a serious injury.

“Nobody even touched me or anything,” said Logan. “It was a pretty typical ACL injury, I checked all the boxes.”

For Logan it was yet another injury in a career that’s been plagued by it. Her high school career was one injury after another. She’s had a compound fracture in her left tibia. At NNU, Steele says she’s had elbow surgery, concussion issues and he’s sure there are others he doesn’t remember, or she just hasn’t told him about.

The Fossil, Oregon native is just that tough.

“She’s your typical ranch hand cowgirl,” Steele said. “She’s out there getting beat up by 2,000-pound bulls when she goes home, so I’m assuming here is like a vacation.”

Although disappointing, Logan knew the injury wasn’t going to be the end of her career. Instead, she tried to focus on the positives. It gave her another year to figure out what she wanted to do after basketball. It allowed her to be a fan during the team’s historic season.

“I try to switch my mindset pretty quick, because I’ve been hurt before,” Logan said. “I know the faster you are optimistic about it, the easier the whole process is and the faster it usually goes. I tried to flip that around, my teammates were really helpful with that.”

Another positive came in a completely different sport. In the spring, Logan finished third at the NCAA Division II Outdoor Track and Field meet in the javelin. In November, Northwest Nazarene hired Ozie Oscar Duncan, a former U.S. Junior National Champion in the javelin.

“That is something I’m really happy about for her,” Steele said. “After basketball is over, she’s going to go have maybe have her best javelin year ever, because she’s going to get elite-level coaching specifically in her sport. She’s got the basketball and the javelin part.”

But before then she hopes to make the most of her second opportunity at a senior basketball season. She watched the successes that Tubbs, Gall and Merritt — players who she entered the school with in 2014 — posted during their swan song.

Now Logan hopes she can build off their finale and make hers just as special, if not more.

“I think it just built our confidence a lot, which was something we maybe struggled with before,” Logan said of last year. “We always had a ton of talent, but we didn’t know how good we were. That kind of opened our eyes to how we can be one of the best teams in the conference and go to the national tournament and do all these things. We talked about them before, but actually doing them gives you the confidence to get back.”