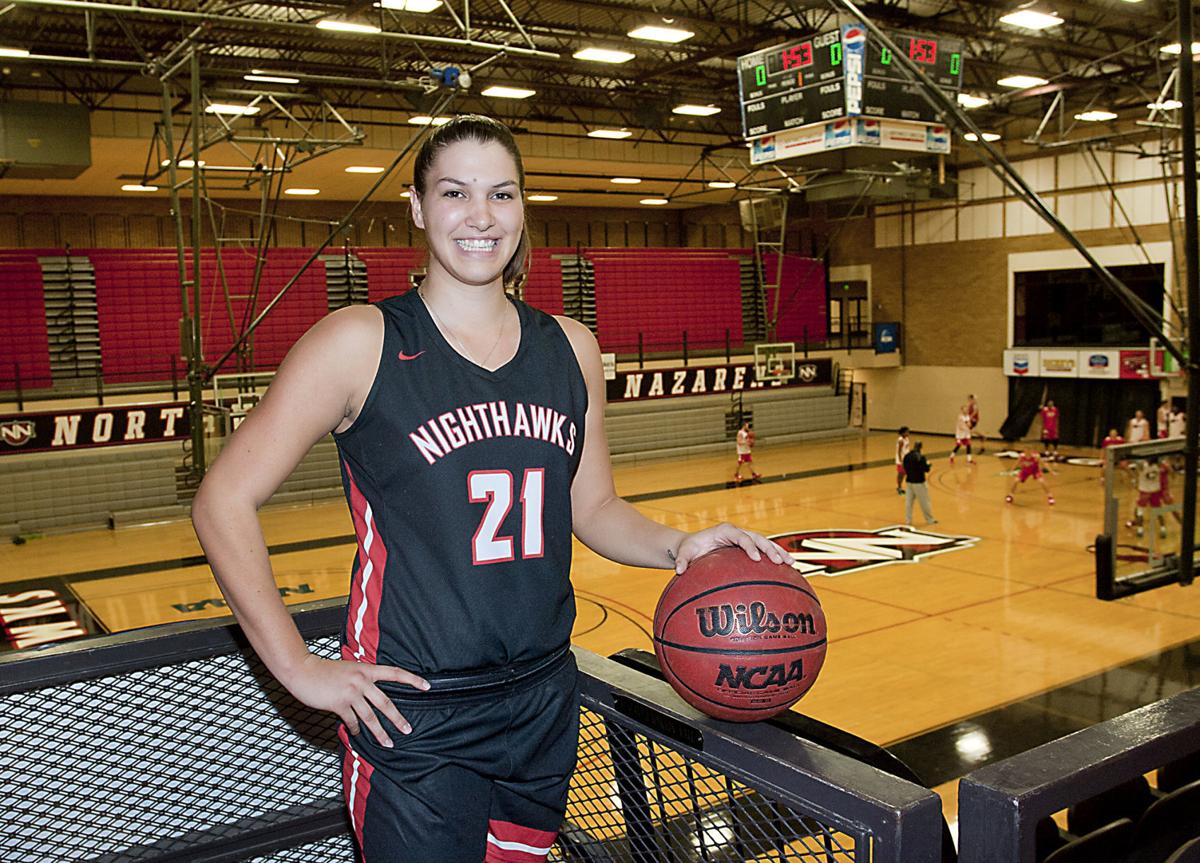 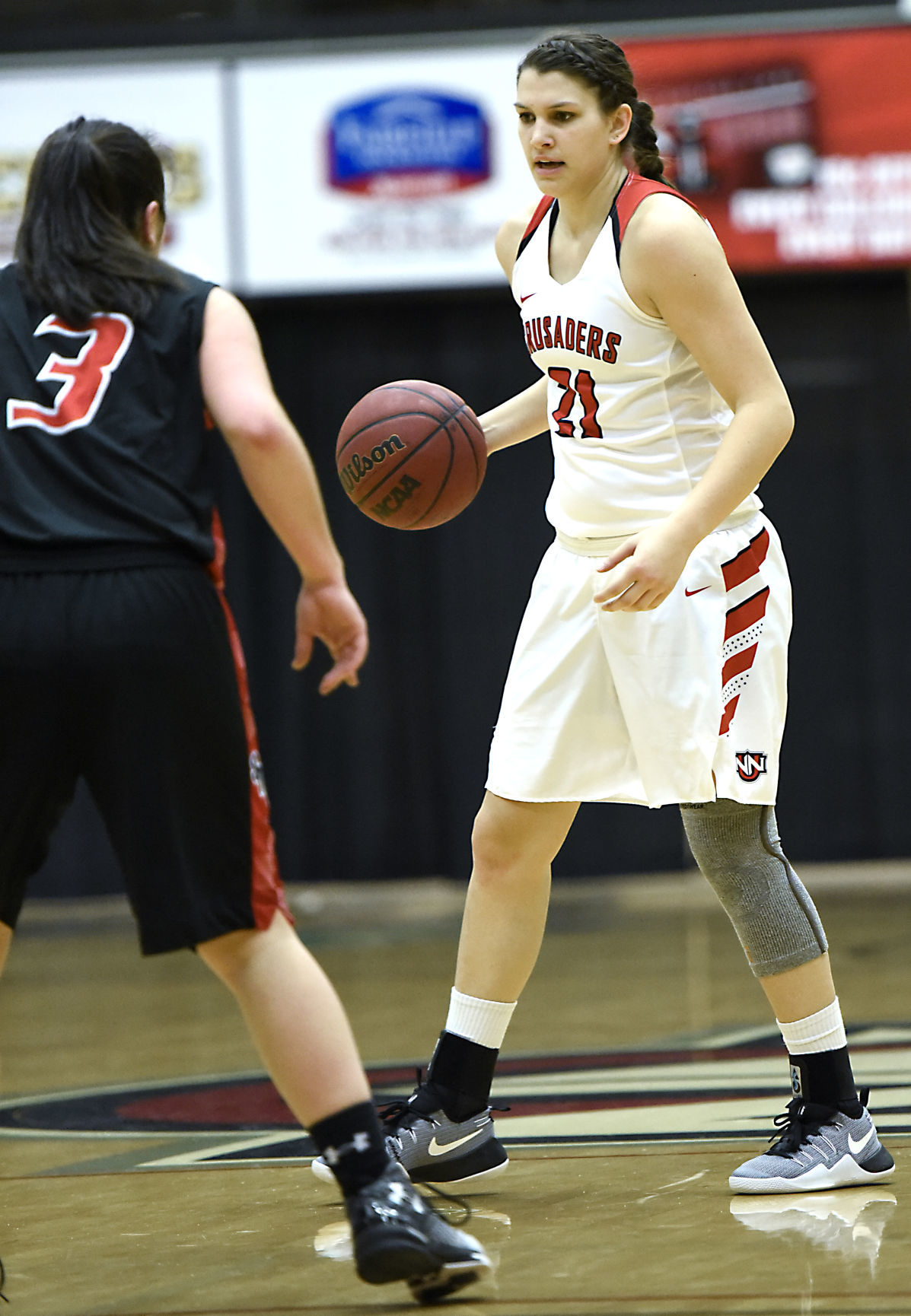 Northwest Nazarene forward Maya Rodgers (21) brings the ball down the court in a game last season against Saint Martin's on Jan. 28, 2017. 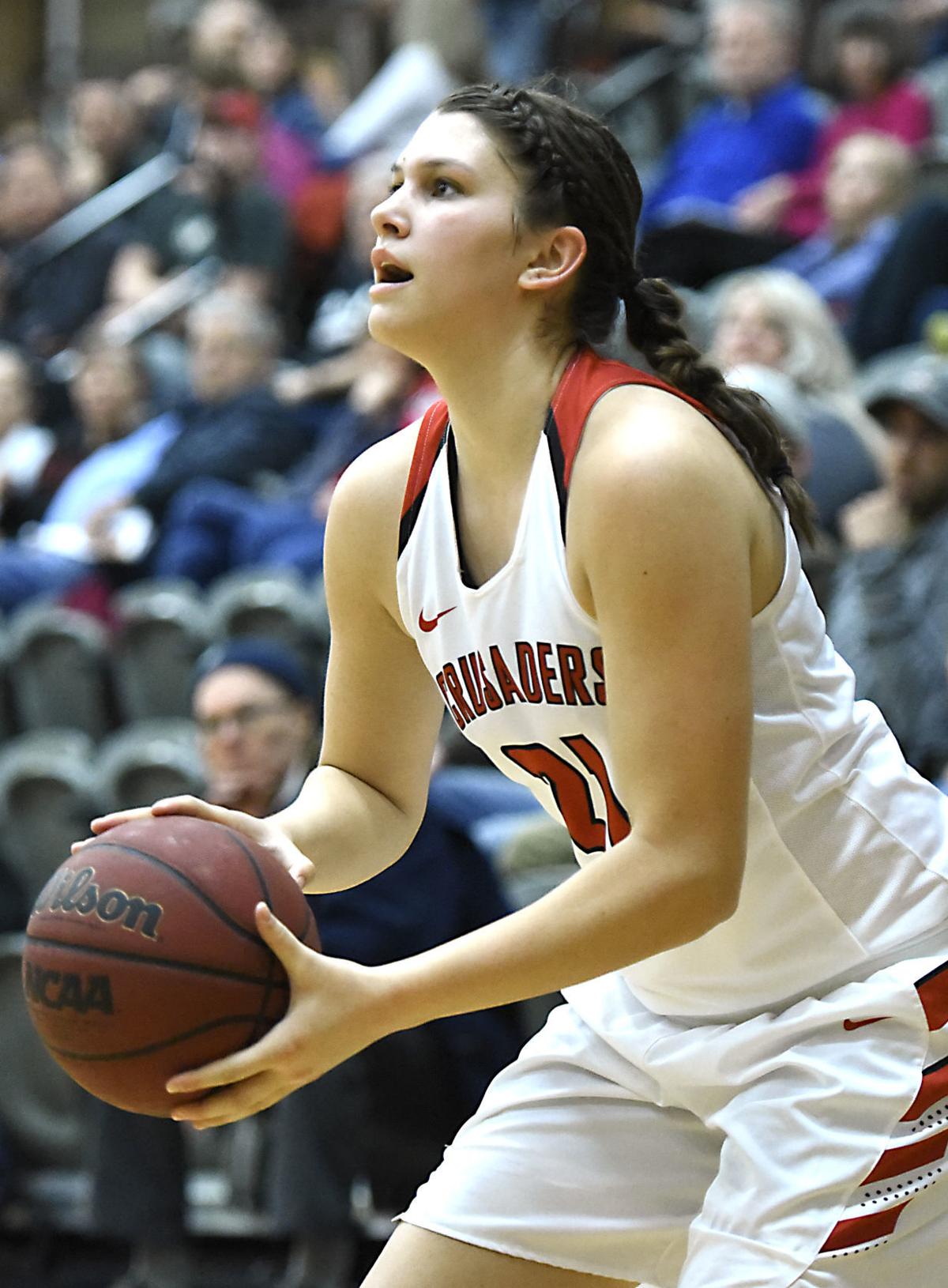 Northwest Nazarene forward Maya Rodgers (21) sets up for a shot attempt in a game last season against Saint Martin’s on Jan. 28, 2017. 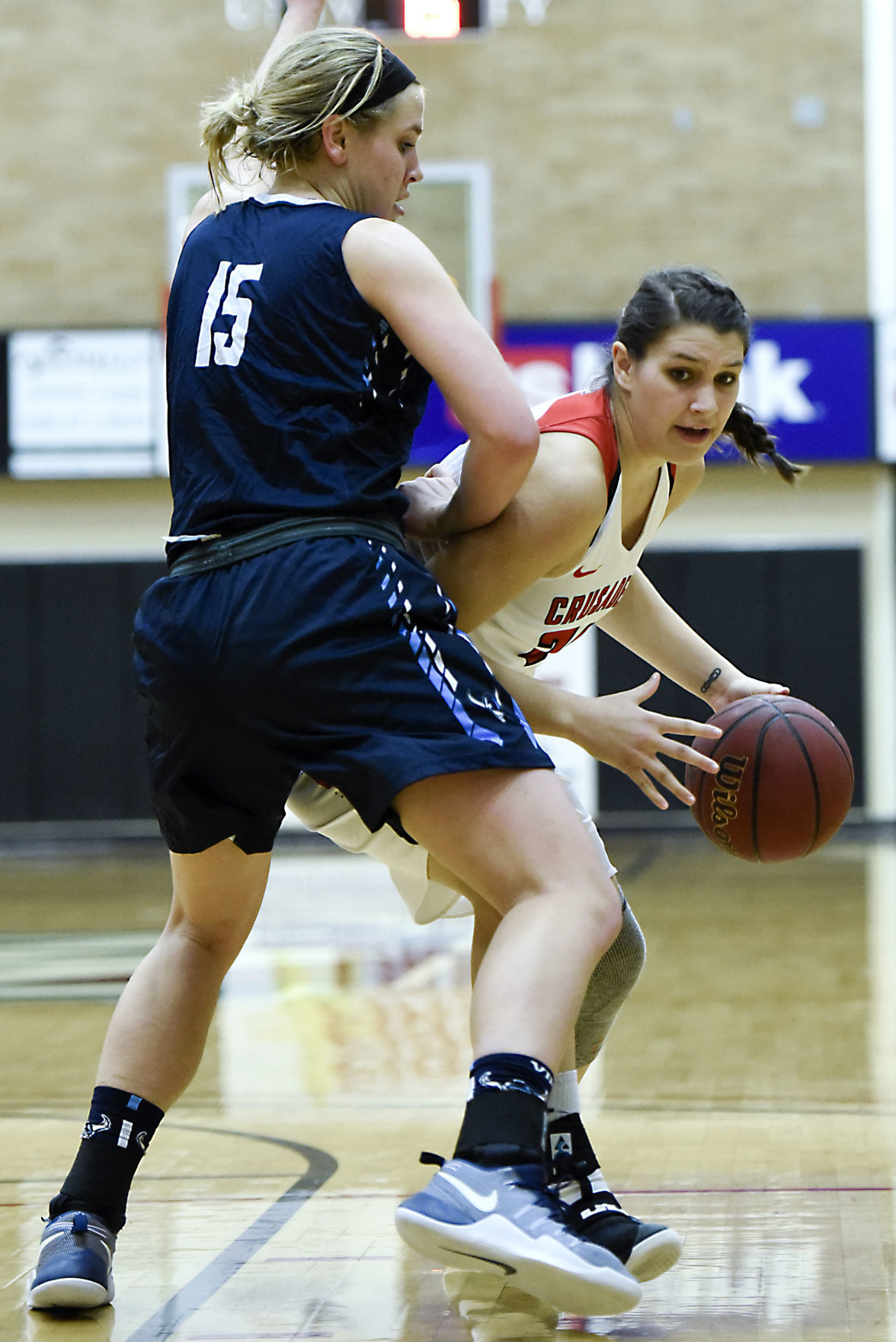 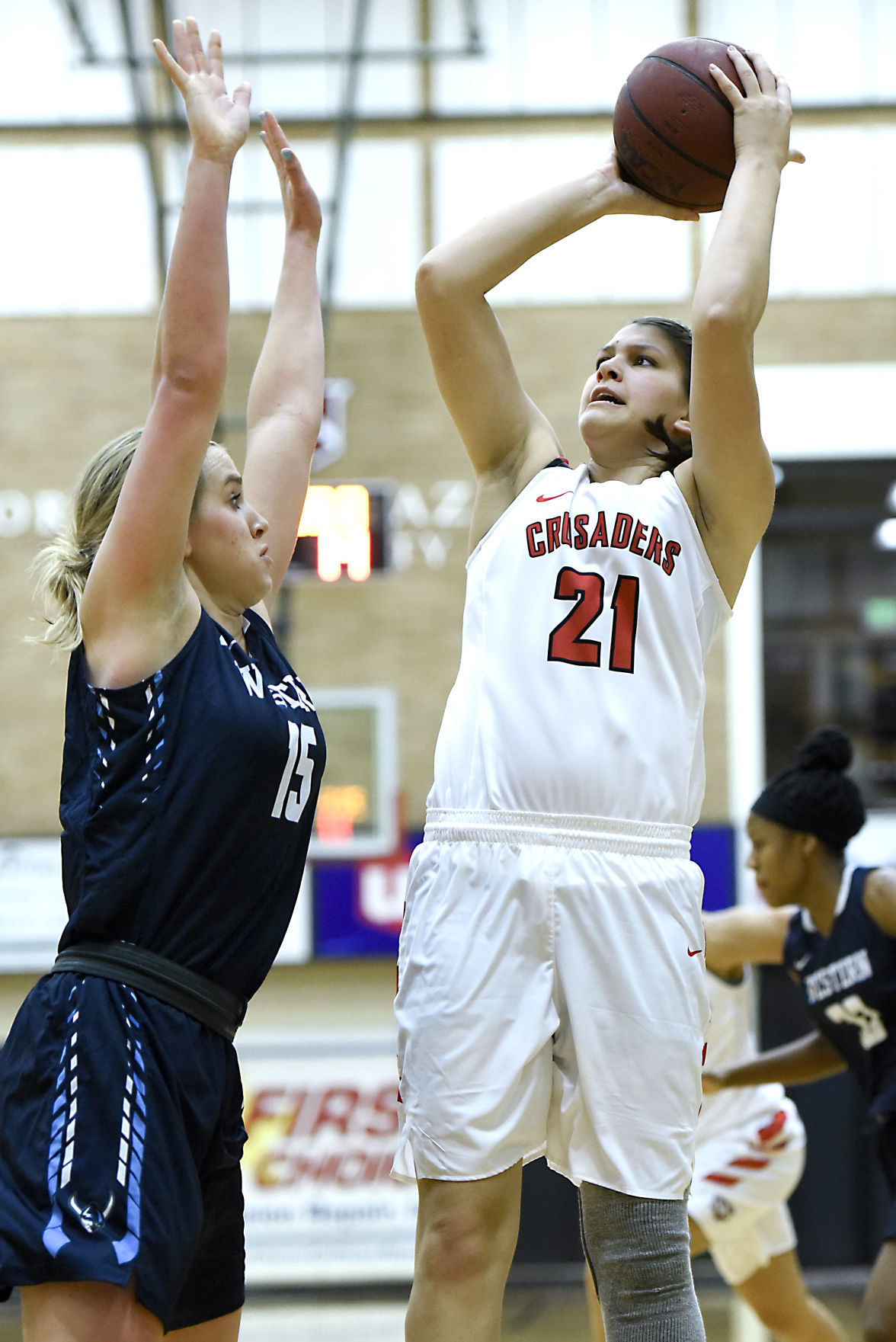 Northwest Nazarene forward Maya Rodgers (21) brings the ball down the court in a game last season against Saint Martin's on Jan. 28, 2017.

Northwest Nazarene forward Maya Rodgers (21) sets up for a shot attempt in a game last season against Saint Martin’s on Jan. 28, 2017.

It's hard to blame the Northwest Nazarene women's basketball player. Having five knee surgeries in five years is not exactly something she wants to remember.

But remarkably, the redshirt junior forward is still playing. Her latest return will officially start at 5:30 p.m. Friday when Northwest Nazarene opens its season against Stanislaus State at the NNU Johnson Sports Center.

Hopefully, this will be the last comeback, too.

“All the doctors said I should stop. They told me I should think about my future. They were probably right. It was probably life giving me a sign to stop. But I didn’t care,” Rodgers said. “Basketball has been a part of my life forever. It’s sculpted me into who I am today. I’ve had so many opportunities from it. So I never thought of giving basketball up.

"The team kept me going. They are such a good group of girls and they made me feel so loved this whole time. Their encouraged made it so easy for me to want to come back time and time again. They made me want to play for them and I don't think I would be back here today without them."

It all started in high school.

The Rocky Mountain High product was just finishing up her sophomore year when the injury that started it all occurred. She went up for a simple rebound at a practice during summer basketball. When Rodgers came back down, she hyper-extended her left knee. The knee completely shifted directions on her.

It was a torn ACL.

But Rodgers was still able to play her junior season. She only had about a six-and-a-half-month layoff. Rodgers came back in December and went on to help Rocky Mountain place second at state.

The knee also held up well during her senior year. Rodgers led the team in scoring and rebounding on her way to earning All-5A Southern Idaho Conference first-team honors that year. The Grizzlies also went back to state where they lost in the third-place game.

Rodgers ended her Rocky Mountain career as a four-year starter and a 1,000-point scorer. Several programs blew up her phone and knocked on her door as a result.

This included the University of Denver. It was there where she signed her National Letter of Intent and played her first year of collegiate ball for the Division I school.

However, the experience left her broken in more ways than one.

NOT WHAT IT WAS SUPPOSED TO BE

Rodgers tore the meniscus in the same left knee she had suffered the ACL injury just two years prior. But because of pressure from the coaching staff and the team, she still played the rest of the season.

She appeared in all 28 games and played about 14.7 minutes per game. Rodgers averaged three points, 2.5 rebounds and had a team-high 82.8 free-throw percentage that season.

But it was far from a pleasant encounter.

In addition to being physically compromised, Rodgers had disagreements with the coaches and the trainers on not only the injury, but how to proceed with her career.

So she left for NNU.

"It was obviously really tough for me there and took a toll on me in a lot of ways," Rodgers said. "So when I transferred, a part of me wanted to stay D1, but now that I’m here, I’m so glad I changed my mind. The competition here is just the same as it was at Denver, it just doesn’t have the status and the money, which I don’t need that stuff. I just wanted to be in an environment that was going to put me in the best position to succeed.”

A SERIES OF UNFORTUNATE EVENTS

Rodgers had her meniscus repaired before arriving at Northwest Nazarene. But the procedure was done far too late. She didn’t quite have enough time to rehab the way that she had wanted to, and it once again left her far from 100 percent.

She played in 25 games, but averaged even less time than at Denver with 10.6 minutes per game and only started once. Rodgers finished near the bottom of every statistical category.

“I honestly don’t know if I could have kept going through something like that because that takes a lot of mental toughness,” senior guard McKenna Walker said. “So it’s just really inspiring to me because I know some people would have been done after the first one. Not only to come back, but come back with such a good attitude. She’s never complained about anything. Not once.”

Rodgers had surgery No. 3 on her left knee shortly after that season ended. It turned out the rush back had caused the cartilage in her knee to decay. So she took her time coming back last season.

But it didn’t matter.

Rodgers blew out both knees during a scrimmage against the men. She tore the ACL in her right knee this time around to go along with another tear in her left meniscus.

She only played in five games and had a double surgery the day after Christmas.

“All I thought was ‘Are you freaking kidding me? Another one?’ But I guess I had to learn another lesson,” Rodgers said. “It was so frustrating, you have no idea. I felt like I did everything right with rehab, icing and all of that. But no matter what I did, it just kept happening over and over again. It was this cruel never-ending cycle that I just couldn’t break.”

However, Rodgers still stuck around and used a medical redshirt for the year.

She attended every practice, rebounded for teammates, offered Northwest Nazarene head women's basketball coach Steve Steele her advice during in-game situations and sat in the same spot at the end of bench cheering the Nighthawks on the entire time.

NNU went on to win the Great Northwest Athletic Conference regular season title for the first time in 18 years and qualified for the NCAA Division II tournament.

“She was still a huge part of our success last year,” Steele said. “I don’t think you see a lot of players with her talent who enjoy giving to others like she did for us last season. I think that makes her pretty special and speaks to the type of player she really is. As incredibly talented as she is, she's selfless and does whatever is in the team's best interest. That's as big as a compliment as I can give."

In addition to her regular rehab, Rodgers spent this summer working as a zip lining guide in Twin Falls. Rodgers strengthened her knees by routinely hiking back and forth to check the lines.

Rodgers averaged 11 points per game in Northwest Nazarene’s two exhibition games this season. She logged 16 points in a 93-58 loss to No. 8 Oregon State Saturday.

“When Maya’s healthy, she is one of the greatest talents I’ve ever seen,” Steele said. “I mean you can just tell right away she is a Division I talent. She can run the offense from the forward spot. She can handle the ball, shoot, pass, rebound and she can post up.

"LeBron James is the person that immediately comes to mind when I think about her and her skill set.”

The Nighthawks are hoping they can continue to get that type of production out of Rodgers in a season that will be filled with lofty expectations. NNU was picked to defend its GNAC regular season title in the league’s preseason coaches poll. Northwest Nazarene is also ranked No. 24 in the country.

Rodgers is hoping she can be a part of that as well. She just wants one healthy collegiate season.

But the 21 year old doesn’t harbor any bitterness and doesn’t think in the world of what ifs. Nevertheless, a healthy season would still go a long way and be a much better thing to keep track of.

“I just want one good year. My goodness. I look down at my knees all the time and say ‘you will hold up,’” Rodgers laughed. “But in all seriousness, I know I’m not the same player as I was before, but I don’t think that way or it would drive me crazy. I can’t live in fear or I might as well just give up and not play anymore.

“This whole thing has taught me how to overcome a lot of things, mentally and physically. I've had to learn to give back in other ways. If something hard comes along it’s like ‘oh I have been through worse. I can overcome this.’ One little inconvenience is not the end of the world. I’ve had five knee surgeries so I can probably get through anything now.”