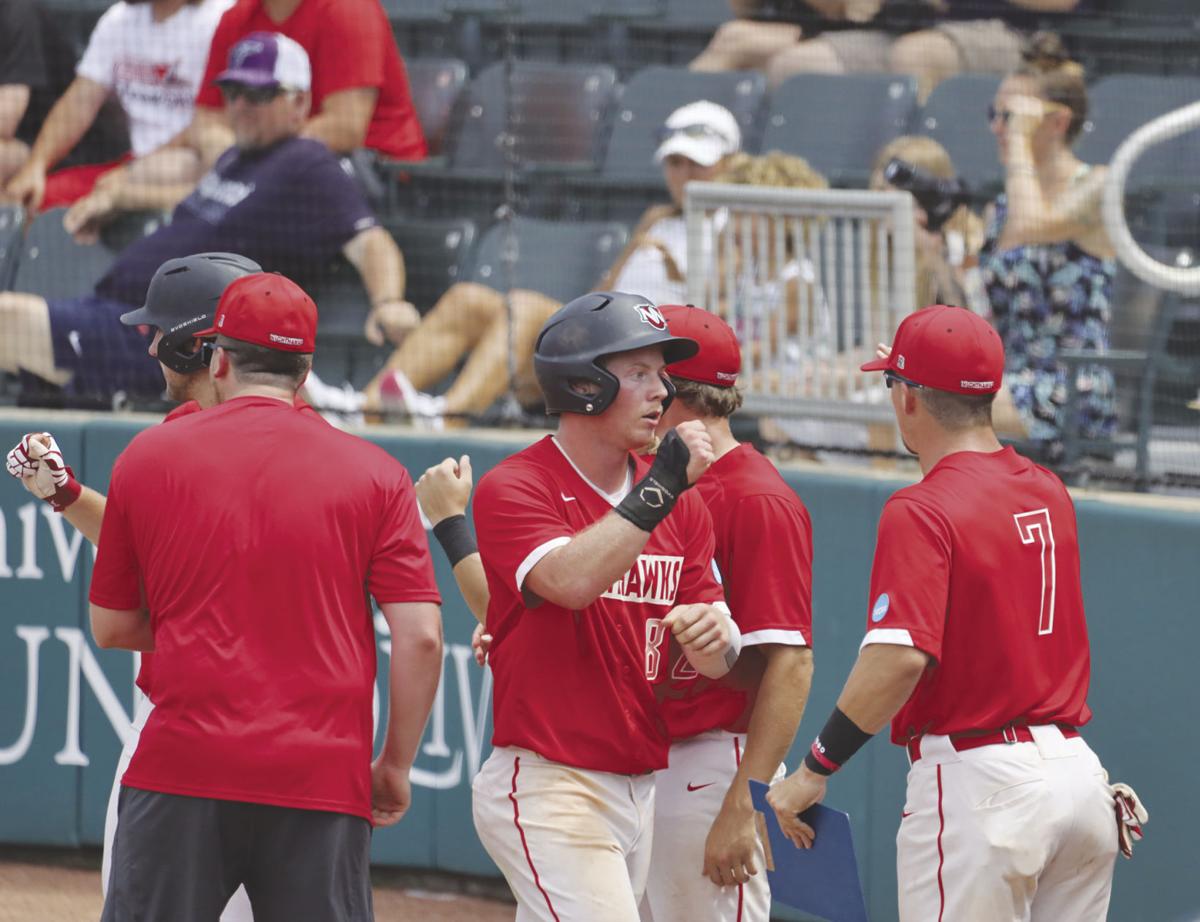 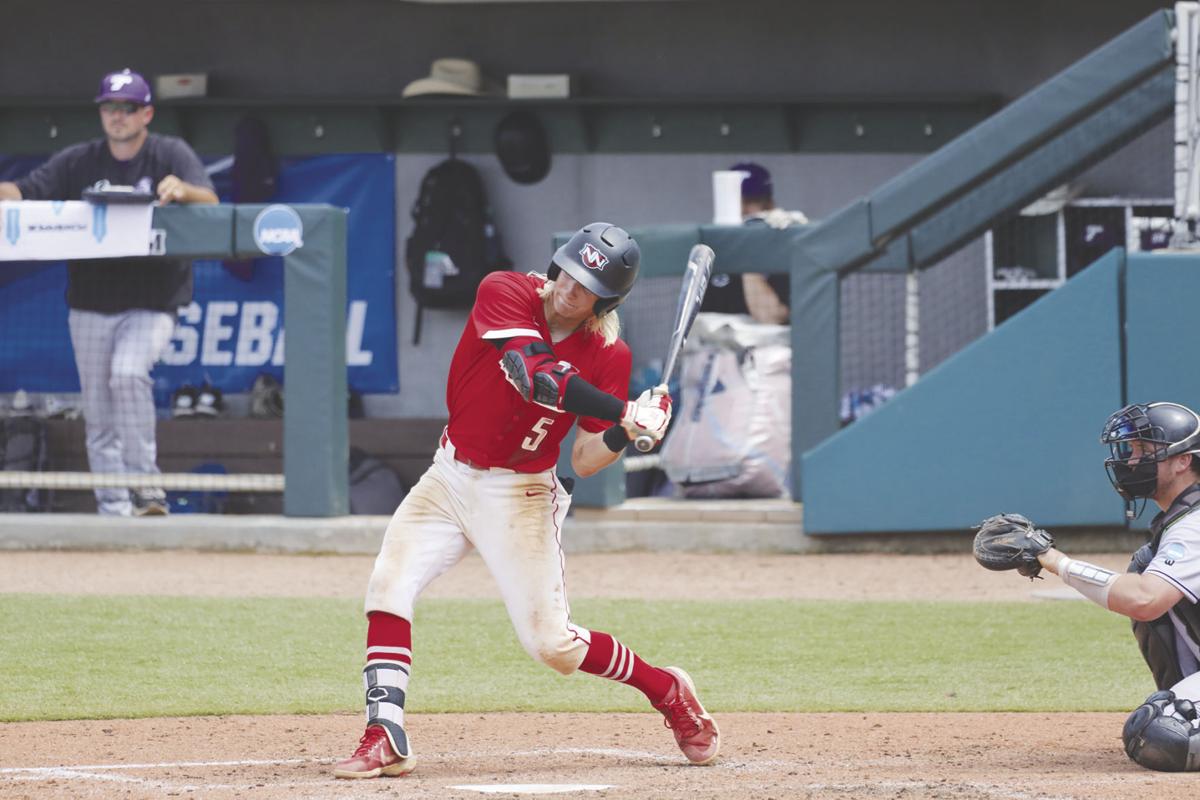 Northwest Nazarene’s Colton Moore gets ready to swing at a pitch during a game against Trevecca Nazarene on Monday in Cary, N.C.

Northwest Nazarene’s Colton Moore gets ready to swing at a pitch during a game against Trevecca Nazarene on Monday in Cary, N.C.

Another big inning for the Northwest Nazarene baseball team was bookended by a pair of triples on Monday, with Haden Keller starting the bottom of the seventh inning with a leadoff triple and Ryan Dearing capping it with an RBI triple eight batter later.

In between, the Nighthawks scored seven runs to not only take the lead, but blow the doors open on the game in a 9-3 win against Trevecca Nazarene in an elimination game at the NCAA Division II World Series. It marks the first win at the World Series in program history in a season that has been filled with several other firsts for the Nighthawks (35-9).

“Every one of them (the firsts) are sweet and they all mean something a little differently,” said Northwest Nazarene coach Joe Schaefer. “Just making an an appearance in the regional after that conference tournament, then winning that regional, now getting our first win her, it’s all sweet. I think it’s huge for our program, I think it’s huge for our conference, just starting to build some respect for the GNAC conference and the caliber of baseball we have up here. Hopefully we can go win another and continue to build that credibility.”

The Nighthawks will get a day off before returning to the field to face either Central Missouri or Tampa in another elimination game.

“The other option was to be packing up and be on a plane at 6:30,” said Northwest Nazarene junior Colton Moore, who was 2 for 4, including a two-run double in the seventh inning and scored two runs in the game. “So it’s awesome that we’re going to get back at it and I think that we’re definitely not done yet. We got our eye set on bigger things.”

Northwest Nazarene earned the win by scoring nine unanswered runs after falling behind 3-0 to the Trojans. Trevecca Nazarene scored two runs on a two-out single in the top of the second then added another run in the fourth on a two-out triple.

The Nighthawks entered the bottom of the fourth inning without a hit in the game, but after Ben Johnson was hit by a pitch and John Gonzalez walked, Grant Kerry had a one-out single to load the bases. The Nighthawks were unable to take advantage though, as a strikeout and foul out ended the threat.

It proved to be just the beginning for the Nighthawks’ offense, though.

“To get that first hit on the board and have some opportunities to score runs early in that game, definitely gave us some hope,” Schaefer said. “It was frustrating that we couldn’t come through and breakthrough in those first couple of innings, but it gave us confidence and we felt comfortable that it was going to happen pretty soon.”

The first breakthrough happened the next inning. Moore led off the fifth with a single and then the Nighthawks loaded the bases with Dearing drawing the walk and Keller hitting a single. This time, the Nighthawks came through as Johnson ripped a drive to center to score Moore and Dearing, cutting the Trojans lead to 3-2.

The Nighthawks took the lead in the seventh with a two-run double by Grant Kerry, and didn’t let up there.

Isaac Hines, making his first plate appearance of the World Series after coming in as a pinch runner the inning before, extended the lead to 6-3 with a two-run single. Moore drove in a two more runs with a double before scoring on Dearing’s triple.

“We got some traffic early on the bases and we did a good job of swinging at good pitches,” said Moore. “A lot of us have shown all year we can put our thunder behind it and it was about seeing good pitches and just trusting in our swings.”

Blake McFadden took things the rest of the way, pitching three scoreless relief innings to earn the win, his fifth of the year. He combined with starter Kyle Ethridge, who pitched the first six innings, to give Northwest Nazarene 11 strikeouts on the day.

With the Nighthawks not needing to go deep into the bullpen, coupled with a day off Sunday and a day off Tuesday, Schaefer said his team will be in good shape pitching wise for Wednesday’s game. Left-handed sophomore Spencer Schwehr, a Borah High graduate, is expected to get the start on the mound.

“We should be pretty well rested, we’ll get everybody back from Saturday, as well,” Schaefer said. “It’s all hands on deck now, so the second somebody’s not looking sharp, we’re just going to have to make a move and get on to the next guy. It’s win or go home, just like it was today. We got to find the guy who’s sharp and will get outs and having a deep bullpen is nice, because it allows us some flexibility there.”