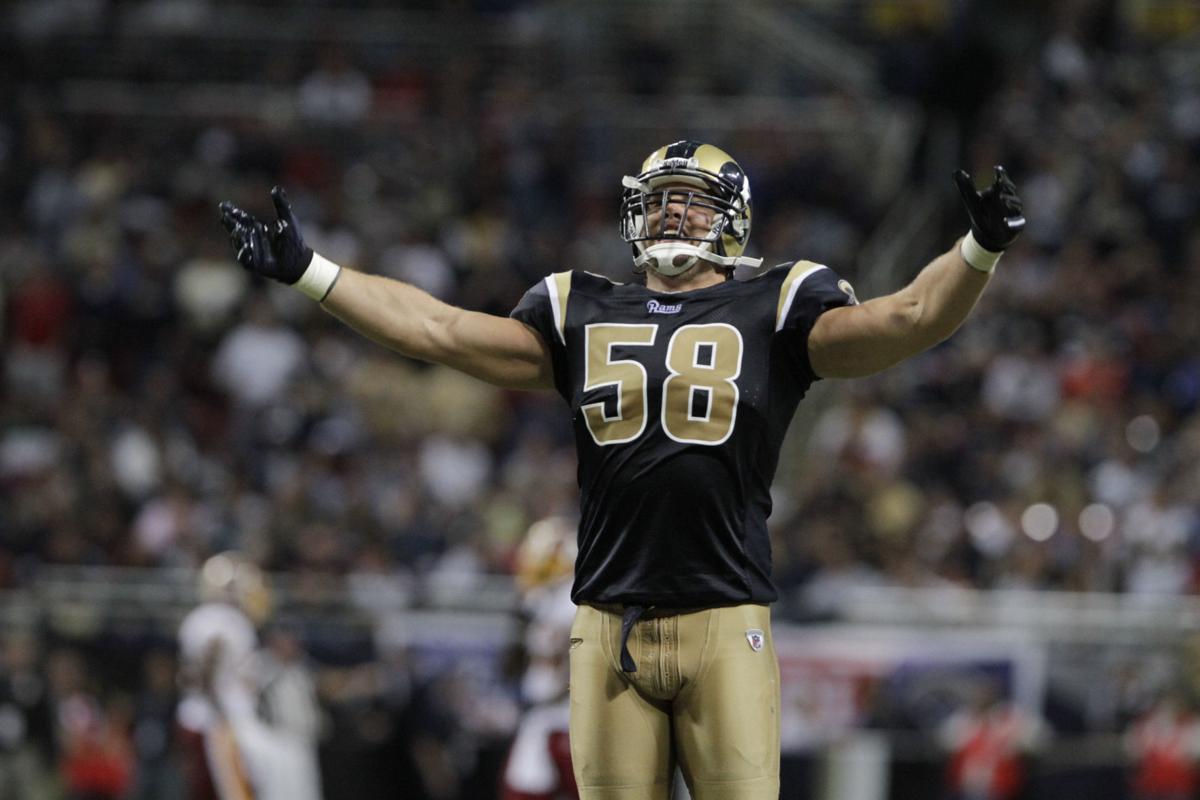 Former Idaho Vandal and ex-St. Louis Rams linebacker David Vobora tries to work up the fans and get them to cheer during an NFL game Sept. 26, 2010. 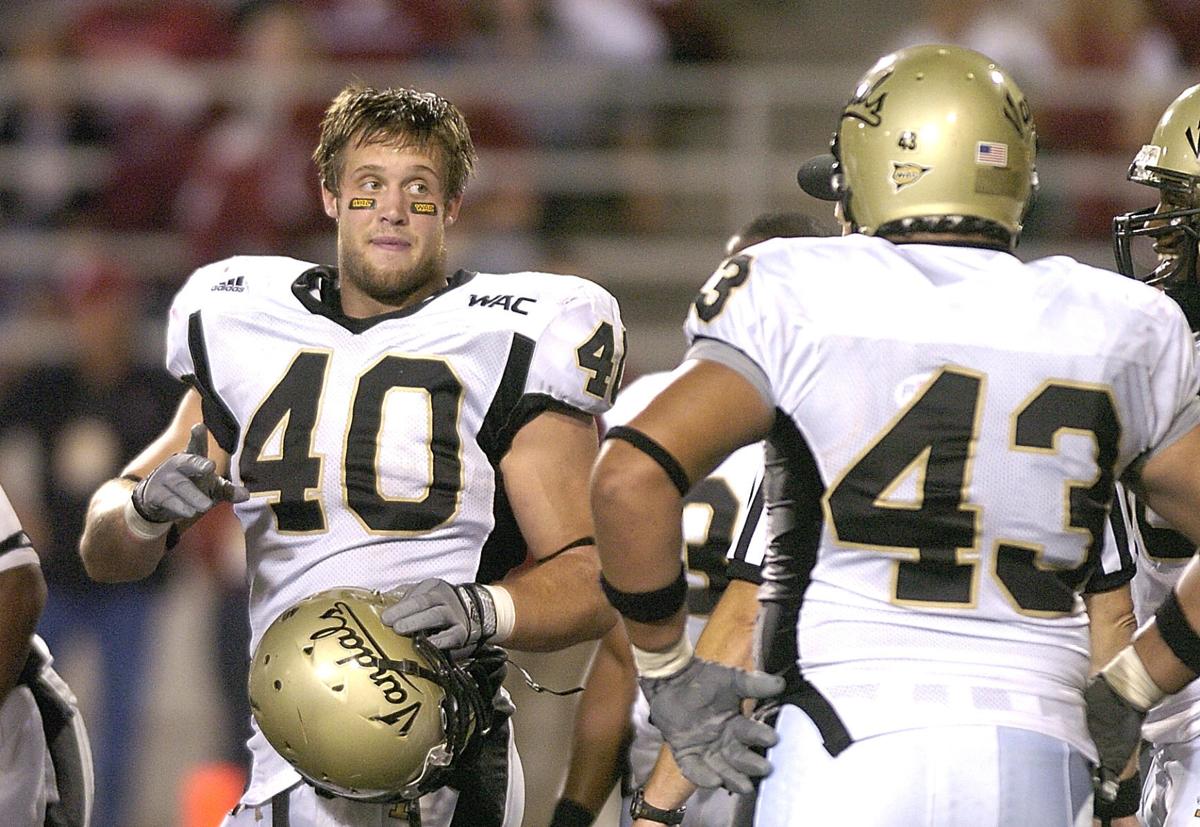 Former University of Idaho Vandal David Vobora is seen talking to teammates during a game in a Sep. 15, 2007.

Former Idaho Vandal and ex-St. Louis Rams linebacker David Vobora tries to work up the fans and get them to cheer during an NFL game Sept. 26, 2010.

Former University of Idaho Vandal David Vobora is seen talking to teammates during a game in a Sep. 15, 2007.

David Vobora defines success by purpose, “closing the gap between who you think you are and who you’re called to be.”

The former star University of Idaho linebacker (2004-07) and one of the NFL’s most productive all-time Mr. Irrelevants — the NFL draft’s final pick — employs such thinking in his adaptive training sessions and high-profile speaking engagements.

“If I’m talking through a computer screen, if I’m face-to-face with someone at the gym, if I’m standing on a stage on Park Avenue at J.P. Morgan,” Vobora said, “I’m using my story and my experiences to draw consistency with the audience and the person I’m pouring into, with the hope that they can also become aware of some of their own defeats in their life, and, therefore, have a chance to reposition.”

In recent years, the Eugene, Oregon, native has taken ownership of his focus. His four-year NFL career with the St. Louis Rams and Seattle Seahawks wasn’t a peak, it was a primer, “it was the bow getting pulled back for the arrow to be shot that much farther,” he said recently from his home in The Colony, Texas, just outside Dallas.

It ushered in what Vobora considers “the most important work of my life, which is post-football.”

A couple of years after he’d retired from the NFL — in large part because of a severe shoulder injury — Vobora and his wife, Sarah, settled in Dallas to be closer to her family. Vobora opened a gym, and began to train elite athletes and NFL hopefuls.

But it wasn’t fulfilling. Vobora hadn’t yet found his purpose, or redefined what it meant to be himself.

“Getting out of football, I didn’t cope well,” he said. “My opiate addiction started with a shoulder injury and that pain. But no, it really started with me putting myself in a box of, ‘David’s best potential,’ or thinking that my greatest achievement had already occurred, and is being torn from me.

“That’s a terrible mindset. I needed to apply the skills toward where I actually had another opportunity to grow and learn.”

Vobora discovered his calling after peering into a new arena, and finding his attributes were “primed and forced multipliers for service, impact, and I’d say, positivity.”

Through a mutual friend, Vobora was introduced in January 2014 to Travis Mills, a U.S. Army staff sergeant who’d lost all four of his limbs to an IED explosion in Afghanistan. Conventional gyms didn’t offer the appropriate equipment. Mills was searching for something adaptable.

At that moment, Vobora had happened upon his why — a massive need for a population which coincided with the “three generations of Marines” in his family background.

“If I hadn’t been married when I got out of football, I probably would’ve signed every waiver to be a Devil Dog,” Vobora said. “My grandpa, my hero, fought in three wars. He was a lieutenant colonel, fought 31 years. I feel like the work I’m doing is how I serve those who serve.”

Vobora asked Mills when the last time he worked out was, which prompted Mills’ retort, “I don’t wanna make you feel like an (expletive), but I don’t have arms and legs.”

“I said, ‘I understand that, but why does it matter? Your physicality may look different, but you’re a living, breathing human. We’ve got something in common,’” Vobora recalled.

“Principles that have restored hope and redefined what’s possible for these humans that had felt broken and had legitimate trauma, those can be implemented across all humans.”

Now about six years running, Vobora’s Adaptive Training Foundation in Carrollton, Texas, has become a nationally renowned non-profit organization, which is catered mostly to wounded veterans. It provides free nine-week boot camps for people with amputations or other disabling injuries, who work with integrated training experts — and alongside able-bodied people and top-level athletes at the new, 14,000-square-foot facility.

Since meeting Mills, Vobora and his team have trained hundreds of adaptive athletes. They’ve begun filling a void for a community in need, furnishing personal betterment for the athletes and themselves.

“We felt a huge passion, then watched people discover, and transform their lives,” he said. “It was watching magic and growth happen, and the story got bigger.”

Vobora’s central aim for the foundation is instilling self-discovery, and repositioning that tether that’s locked people into what they think they are. Much of it is about identifying debilitating junctures in trainees’ pasts that have weighed on them, and rediscovering a “true north.”

“You’ve got to make it real, wrap flesh around it, and identify our own internal insurgents, then call them into the light,” he said. “Then you realize the delusion of it, that you had way more power than the actuality. Fear is this cunning yet constructive thing that can be utilized.”

Mental growth runs parallel to physical at ATF. Support groups are a key cog in the program. One of Vobora’s more important lessons is to “consciously respond” to life’s daily challenges, “rather than unconsciously react” in the present moment.

There are no mirrors in the gym. ATF athletes train to find their intentions, not simply burn calories.

“This movement toward integrated training, it’s all about a perspective shift,” Vobora said. “Yeah, you’re gonna discover a new gear, because the guy next to you has no legs, and he’s pushing it. So you’ll look at yourself like, ‘What’s my excuse?’”

Vobora has been profiled by most major sporting publications. The former two-time All-Western Athletic Conference honoree has been visited in his gym by former President George Bush — and been given presidential cuff links.

He’s been on “The Ellen DeGeneres Show,” and had then President Barack Obama invite him to the White House for the South by South Lawn event, which brings together creators to share their innovations with society’s upper-crust. Vobora had suggested that progress would mean every gym in America has an adaptive trainer on-staff. In response, Obama pondered if a government mandate would be the way to go.

According to the Dallas Morning News, the foundation has procured almost $2 million in funding from companies and individuals, and there are negotiations about a documentary series with major networks, and a partnership with Arizona State to offer adaptive training certifications.

Vobora often is employed for speaking gigs, in which he offers insights that are commonplace at his gym. A book project might be on the way too.

“It made me realize anyone is reachable; you can genuinely accomplish anything, as long as your attention is set on how it provides a better energy, positivity and service to the world,” Vobora said. “I’m a little Forrest Gumpian in that sense. All of a sudden, I’m running across America, or speaking on a certain stage. I love to live like that, because that’s where you find some miracles.”

In his early days of training, Vobora was “always trying to help others, because I wasn’t willing to help myself.”

Until 2012, he had repressed memories of being sexually abused at age 10 by a teenage neighbor. He said that victimization drove him to seek validation and applause.

“Football, for me, was so I didn’t have to look back in the mirror at myself, and feel ashamed or broken,” he said. “I guarantee I would not have made it to the NFL if that had not occurred. All that pain gave me such motivation and purpose to achieve, that I was just this internal slave-driver to myself.”

He had let his family know of the past trauma, but didn’t begin to process it himself until a few years after, when he realized he was “burning out,” and exploiting his time in the gym similarly to how he used football. He began to work with a coach, who challenged him with literature and tools that helped Vobora forgive and find peace.

“The last two or three years have just been an immense amount of growth,” he said. “Now, these things that flow out of me are things I’ve lived. My hope is to offer them in a way that equips and benefits others.

“I think we need to be humane to have breakthroughs. I feel like I’m living in a time such as this to reflect the light in my heart.”

Through self-reflection and “honest unearthing,” Vobora redefined himself. He’s managed to come to grips with, and ameliorate the crushing weights of his life — not unlike objectives for ATF athletes.

“We’re our own worst critics, and that can limit or put a definition on what’s possible in our lives,” he said. “You suffer enough by repeating the same patterns, and as soon as you become aware of them, you see that they no longer serve you.”

Not long after the ATF launched, Vobora had two “watershed” conversations, one with his wife, and one with Clint Bruce, a friend and Navy Seal.

Bruce told Vobora — who then was considering making an NFL comeback with the Cowboys — that choosing a renewed football career would only be gravitating to what was comfortable, and that it wasn’t what Vobora genuinely wanted. During a late-night “interrogation,” Sarah aided David in carving out his intentions.

“She said, ‘There’s no mission without margin,’ and asked if I’d give my family the same amount of attention,” David remembered. “I was trying to do my best, but I was blindfolded. She pointed out that I needed to have a little perspective around it.

“I knew then that I’d found my why, in serving this population. We closed down the for-profit gym.”

Now, the well-funded ATF and its members are truly intertwined with Vobora’s family of four, which includes two young daughters, Elealeh and Everly, and a boy on the way.

Before becoming a champion of the underdog, Vobora was one, an effective one, at that.

The 6-foot-2, 240-pounder was the first rookie Mr. Irrelevant to start a game in 14 years, and — by his second year — was a Rams starter at strongside linebacker. Vobora was Pro Football Focus’ No. 16 graded LB in 2009, when he logged 46 tackles, including four for loss, in 10 starts.

“I’d achieved a dream,” he said. “There’s always a way to play the hand you’re dealt to your benefit. I feel wholeheartedly, that was a huge platform — an opportunity — for me.”

The psychology/philosophy double-major tallied 341 career tackles at UI, sixth in program history. He played 45 games in four years for three coaches, and almost transferred to Arizona State in 2007 after Dennis Erickson’s departure. But he felt compelled to finish his career in Moscow, where he learned a tenet — “stick it out, don’t play for selfish desires.”

The Palouse town and surrounding fields remain serene thoughts for Vobora, who said he’ll name his son Field Michael Vobora after the landscape that kick started a career that, in turn, kick started a vocation that is Vobora’s why.