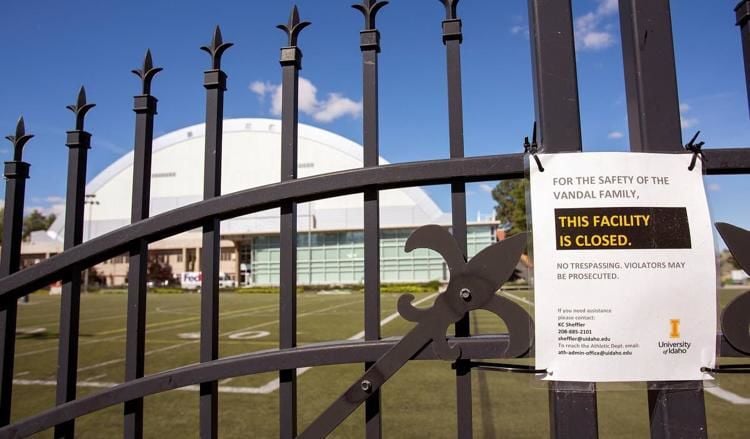 This is the outdoor practice facility at the University of Idaho shown here Aug. 7 after the Big Sky Conference postponed falls sports and moved them to the spring. 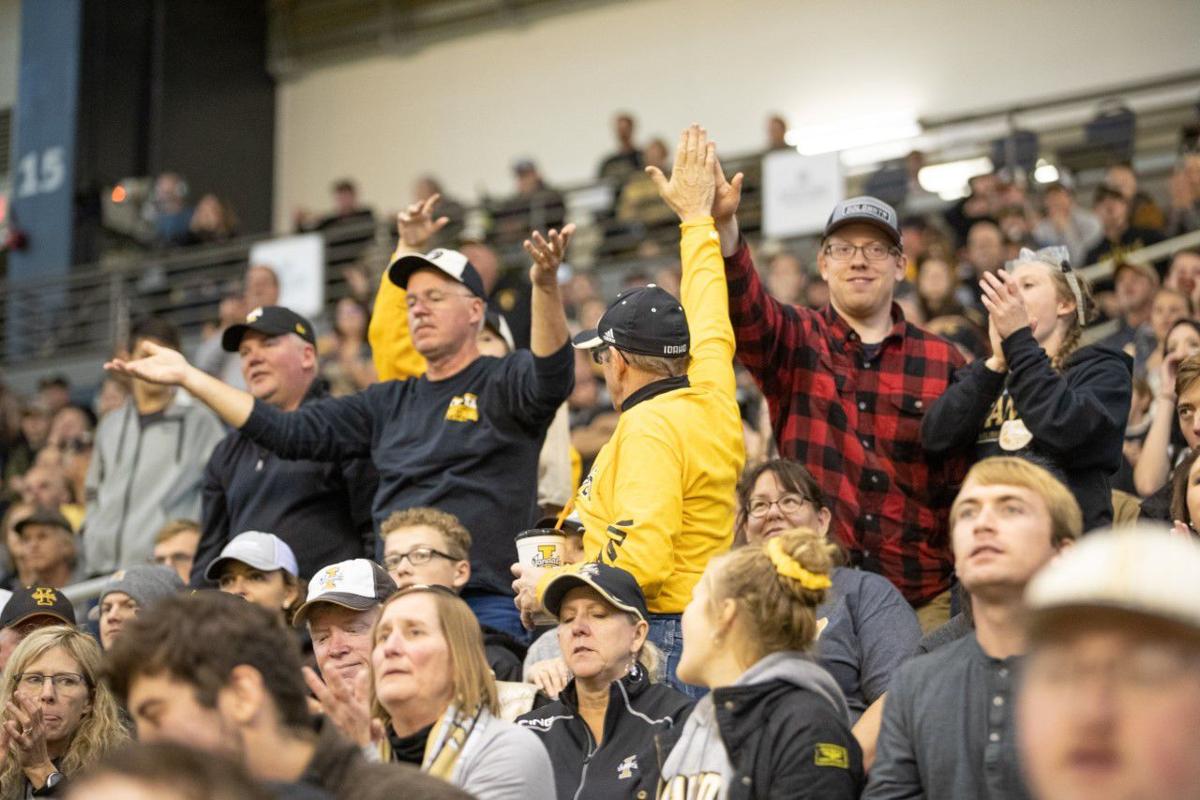 University of Idaho football fans celebrate at the Kibbie Dome during the Vandals’ game against Idaho State on Oct. 19, 2019.

This is the outdoor practice facility at the University of Idaho shown here Aug. 7 after the Big Sky Conference postponed falls sports and moved them to the spring.

University of Idaho football fans celebrate at the Kibbie Dome during the Vandals’ game against Idaho State on Oct. 19, 2019.

As athletic programs and universities seek to put together the financial puzzle pieces scattered by a worldwide pandemic, a recent study led by University of Idaho economics professor Steve Peterson shows how sports programs are interwoven with their schools and communities on a financial level.

Idaho athletic director Terry Gawlik and Peterson, an associate clinical professor of economics at the school, spoke at length Wednesday during an online Moscow Chamber of Commerce luncheon.

Peterson laid out findings of a preliminary study detailing the economic impacts of Vandal athletics on the local community, the full version of which will be released in September. Gawlik covered difficulties the athletic department is facing because of COVID-19, and will continue to cope with in the approaching months.

“We’re in a financially strapped time,” said Gawlik, pointing out the cancellation of a guaranteed-revenue football game that was set for Sept. 19 against Washington State at Martin Stadium, a $550,000 payday gone for Idaho. The Big Sky and Pac-12 conferences earlier this month called off all sports this fall.

“About 70% of our budget spending is on salaries, fringe benefits, but most importantly, scholarships for student-athletes. None of that has stopped, obviously, so we’re still trying to figure out: How are we gonna make this boat float?”

The study finds Vandal athletics to be essential to the school and community at an economic level. Peterson said the total amount of regional spending associated with Vandal athletics is $36.5 million, and it generates $44 million of direct and indirect gross economic activity.

“(Athletics) is virtually inseparable from the university itself,” he said. “It’s a critical asset for recruiting and retention of students. Everything is connected.”

Breaking down the economic footprint into several impact areas in Moscow yields athletic department operating expenditures of about $11 million, 339 athletes spending $6 million and visitor spending from 15,000 visitors of about $3.3 million.

Peterson also found through student surveys that many Idaho students come to Moscow because of the notion that intercollegiate athletics are a part of the campus experience. A 2017 survey found 20% of students said they wouldn’t attend Idaho without intercollegiate athletics. But a more conservative number of 5% still adds about 418 non-athletes, who spend around $11 million.

He said if Idaho maintained its 2003 levels of enrollment, it would’ve added an additional 2,000 jobs to the local economy. Every additional permanently occupied student creates about 0.7 jobs, $50,000 in gross output and $26,000 in wages and salaries, he said. An additional 1,000 students would create 700 local jobs and $50 million in output.

“I think sometimes in the academic community, the effect of enrollment is sometimes overlooked ... especially in the challenging COVID-19 times that we face,” Peterson said. “I applaud President (Scott) Green’s efforts to try to offer in-person classes here at the U of I and his robust plan to test every student coming.”

Said Gawlik: “I know it’s not normal for anyone. In particular, I know our businesses in our community, and across the country, have been struggling. I’m really sensitive to all the outside folks that bring joy into life in many different ways in our community.”

In college towns as close as Moscow and Pullman, the economic impact of one athletic department stretches to both sides of the border, and vice-versa. Homecoming games, for example, regularly fill up restaurants and hotels in both towns.

“Contrary to some popular belief, we’re very much an integrated community here,” Peterson said. “There’s natural regional rivalries, but a job in Pullman for example can have as much benefit in Moscow and vice-versa.”

With no fall sports, the future schedules for both schools still are uncertain. At this time, nothing is set.

Idaho’s athletic department almost breaks even financially when the football program hosts a home conference game. But the local economy sees a boost of “hundreds of thousands” of dollars each time there’s a game day in Moscow, Peterson said.

Gawlik admitted it’s looking increasingly more likely the only games played in the spring — if there is a football season — will be in-conference.

“Unless something opens back up. I don’t know that for sure,” she said, adding Idaho’s staff has been examining new ways of injecting money back into the community, including staging extra events at the new Idaho Central Credit Union Arena, which is set to open in fall 2021.

“We’re just trying to be creative and ask people for the support during such a difficult time,” she said.

A spring season possibly could recoup a little lost revenue.

But some Big Sky schools, like Portland State, still are in the early phases of reopening, and per state and local restrictions, haven’t been permitted to conduct athletic activities. Gawlik has been confident in Idaho’s protocols and testing capacities; the concern lies with opponents.

“We were out in front of it, and it was great that we were able to do it as an athletic department,” she said. “What we started running into was: Well, if we’re gonna test our athletes, then we need to make sure that whoever we’re playing is testing. … Quite frankly, several of our institutions — Portland State, for instance — they’re still in Phase 1. We’re in (Phase) 4, so there was no way they were even gonna start doing anything, any kind of practices.”

At the end of the nearly hour-long presentation, Peterson made a call for unity.

“I think we need to pull together both behind our leadership here at the University of Idaho and our leaders within the community,” he said. “These are very tough times. … I think a lot of businesses in town are on lifelines and we need to keep supporting them and keep a positive attitude.”