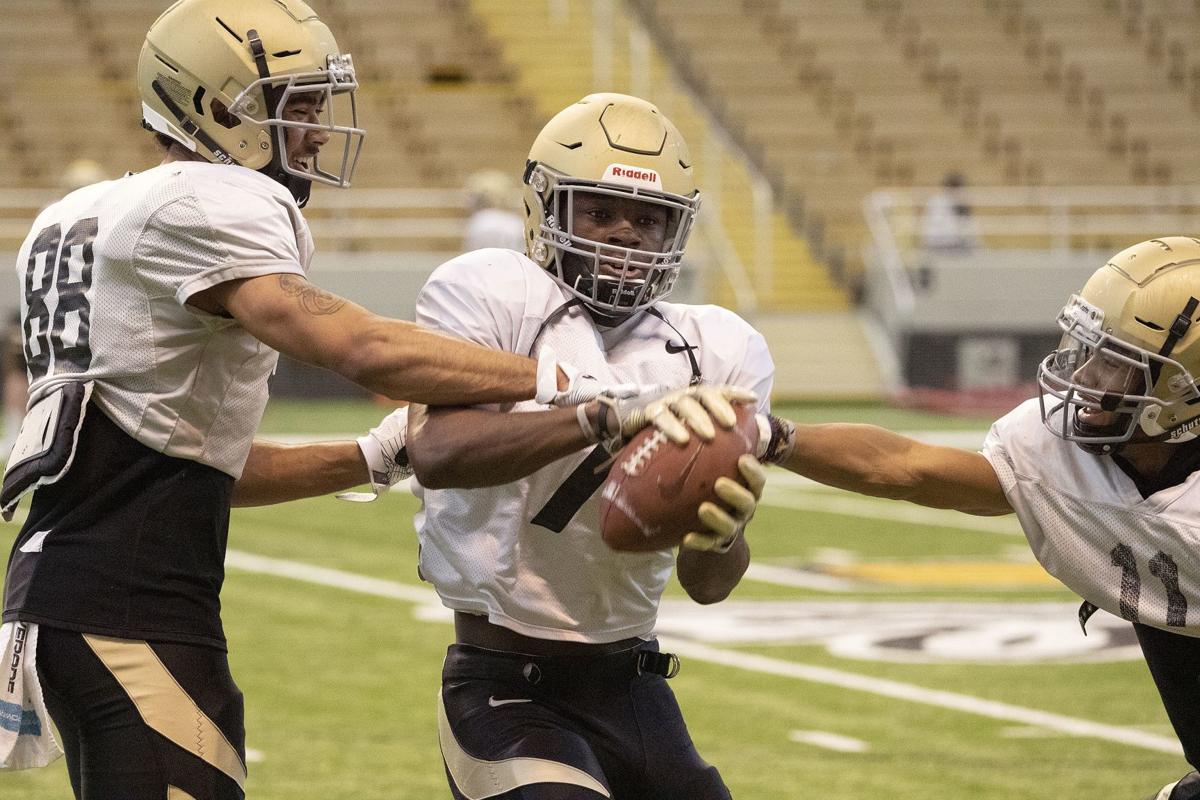 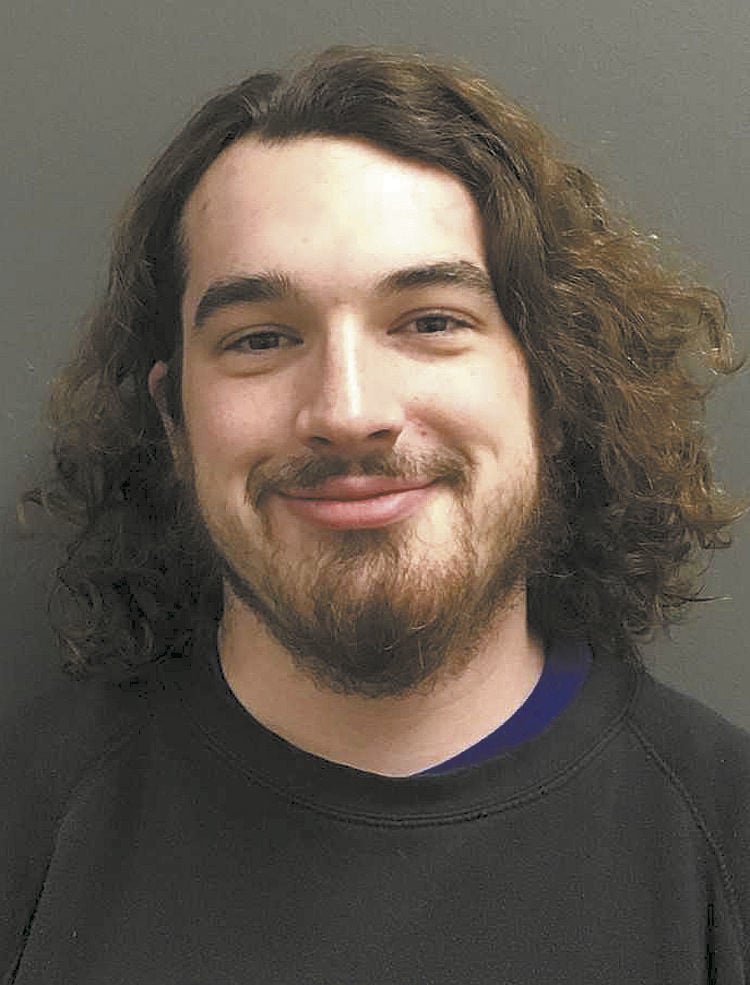 To spark a bit of debate before the tentative start of Idaho’s third season back in the Big Sky Conference — after a 5-7 season — I’ve compiled my personal picks for the Vandals’ top five must-watch players of 2020.

Let’s get right into it.

In Vandals coach Paul Petrino’s enduring quest to control the clock on offense, there needs to be an accelerator, preferably one who doesn’t fall down easily.

That throttle is Carter, the redshirt sophomore bowling-ball running back who drove through tackles with his tree-trunk legs, and simply hurt people in 2019.

He glides, not appearing to exert a lot of energy. But he hits a certain step when he cracks the first line of defense, and can stymie would-be tacklers with a swift high-five to the shoulder. Ask Eastern Washington defensive back Calin Criner, who earned whatever the football equivalent is to being put on a poster during a Vandal win that Carter set the tone for offensively. A photo from former Moscow-Pullman Daily News photographer Kai Eiselein, with Carter striking the Heisman and Criner flying awkwardly toward the ground, has garnered a following, and is hung proudly in the Corner Club.

Carter — the Starke, Florida, native who’s continued Idaho’s string of strong prospects from the southeast— could spark a troubled Idaho offense in spurts, but was forced to sit out three games with an injury. In nine starts, he still finished with 615 yards and seven touchdowns on 113 carries — a 5.4 per-rush average, seventh in the Big Sky.

Expect the soft-spoken bruiser to shoulder the load for a running back corps that’s packed to the brim, and contend for an all-league nod.

If Haywood continues at his pace ... let’s see, he’ll end his career with something around 240 catches for 2,500 yards and 25 touchdowns.

That means, if he improves steadily — but not dramatically — he’ll walk out of the Kibbie Dome for the final time as a top-three all-time receiver in program history in each of the three most important statistical categories. That’s assuming the junior from Stockton, California, doesn’t register a 1,000-yard season in there somewhere, which he probably will.

Haywood, who’s bound to become one on the short list of four-year starters at Idaho, has 1,059 yards on 111 catches and 12 scores already — his stats were near-identical the past two seasons.

But with the graduation of star Jeff Cotton, Haywood is now a quarterback’s first look. He was the third option as a freshman, and second last season.

It’ll be a captivating couple of years to spectate Haywood’s race to No. 1 in the record books. The 6-foot, 205-pounder has large, stickum hands, a stout upper-body and quick feet. In the past, he has excelled on out routes and inward cuts, where he’s strong enough to shed a safety rumbling downhill, and fast enough to outrun the rest.

But Petrino also has called attention to Haywood’s blocking abilities, which were a major boon to UI’s offense — and Cotton’s record-breaking season — in 2019.

With a new quarterback under center, Haywood will be crucial. There’ll probably be some bailing-out taking place.

There was some level of outrage on Twitter the day the Big Sky released its all-conference team last year. Many wondered, “Who was a better middle linebacker than Tre?”

It’s a fair thought. The second-teamer led the league in solo tackles with 74, and was second in total stops with 138 — No. 6 in a single season in program history.

Better yet, he’s only going into his junior year. Two more seasons like that one, and he’s No. 3 in career tackles at Idaho.

The 6-1, 235-pound product of Fresno Central High School in Dos Palos, California, does not have any evident weak spots, and is downright menacing to opposing running backs on dives and traps. It’s commonplace to see No. 8 shedding a lineman, and chalking up another bell-ringer on a stalemate stop at the line of scrimmage.

While Walker’s development into one of the Football Championship Subdivision’s better linebackers as a sophomore felt rather fast, it certainly didn’t surprise those who saw him step up, immediately compete and contribute as an 18-year-old newcomer.

One season later, Petrino was straightforward when asked who his defensive catalyst is — “It’s Tre,” said the eighth-year coach, pointing out Walker’s vocal qualities and tangible intensity he spreads across the defense.

Here’s a guy who can single-handedly alter the momentum of a game for the Vandals, someone who has yet to earn any all-league or All-American plaudits, but who just might be a first-teamer in both come December.

Akanno, an edge-rusher, was the perfect replacement for buck linebacker Kaden Elliss, now of the New Orleans Saints. He was comparatively disruptive, and a pain to block. Petrino said he gets better by the week, considering he’s only been playing the sport since age 15.

Akanno appeared in just eight games as a junior last season because of an Achilles injury sustained in October, but already had put up numbers that’d be respectable if he’d gone all 12. His 13.5 tackles for loss hung in the top 10 of the FCS for a few weeks after he went down.

Good news: Akanno had been pictured taking part in Vandals weight drills before the coronavirus pandemic took over. Petrino has said his prospects look solid.

Remember in Idaho’s home upset of EWU, when Akanno made three consecutive goal-line stops to quell an Eagles surge? Just one of several game-changing reps for the 6-1, 247-pounder from Inglewood, California, who emerged as a first-year starter in 2019 after two seasons behind Elliss.

It’s been said before: Akanno can move like a skill-player, with a low center of gravity off the line, a cut underneath a tackle, or a sharp jab to gain separation. He wins with a blend of power and speed, and can sometimes be seen closely tailing downfield ball-carriers. He swatted down eight passes at the line too.

Any which way, Akanno is one of Idaho’s most entertaining players of the past decade. Don’t be surprised if there’s talk of him being a hidden gem in the NFL draft.

He’s more than made up for dropping and breaking Idaho’s original Potato Bowl trophy as a young redshirt in 2016, something his old teammates haven’t let him live down.

Yes, I do believe Idaho’s top three all-around players are linebackers. The position group is laden with talent that could contend for time at most collegiate levels.

And who knows, perhaps Elliss will be the third in his family to go a step higher, joining his father — Idaho defensive line coach Luther Elliss, who played 10 NFL seasons — and brother, Kaden.

He spends innumerable hours after practices honing himself. He’s perhaps the most pro refined and fundamentally — and instinctively — sound of all the Vandals.

Elliss was Idaho’s lone position-player to land on the All-Big Sky first team, by way of his 104 tackles (12.5 for loss), sure-tackling and speedy play-deciphering.

Elliss, who’s been a key contributor since his freshman year in 2017, is defensively versatile, like his brother. He can play all linebacker spots, rush the edge and defend the pass. Covering the strong side and reading runs is where he’s most comfortable.

Elliss has grown considerably since his days at Colorado prep powerhouse Valor Christian High School, and now checks in at 6-3, 233 pounds. Yet he seems to always play a step faster than that.

Petrino said Elliss leads with passion and knowledge — few play with more conviction, or understand the game better, than him. Teammates gravitate toward Elliss and feed off his drive, which is encapsulated by all the extra reps he takes alone after practice, in some dim corner of the Dome.

With another 100-tackle season, Elliss will jump into the program’s all-time top-10 in the category. But I’d wager his legacy as a Vandal will surpass numbers and collegiate accolades.