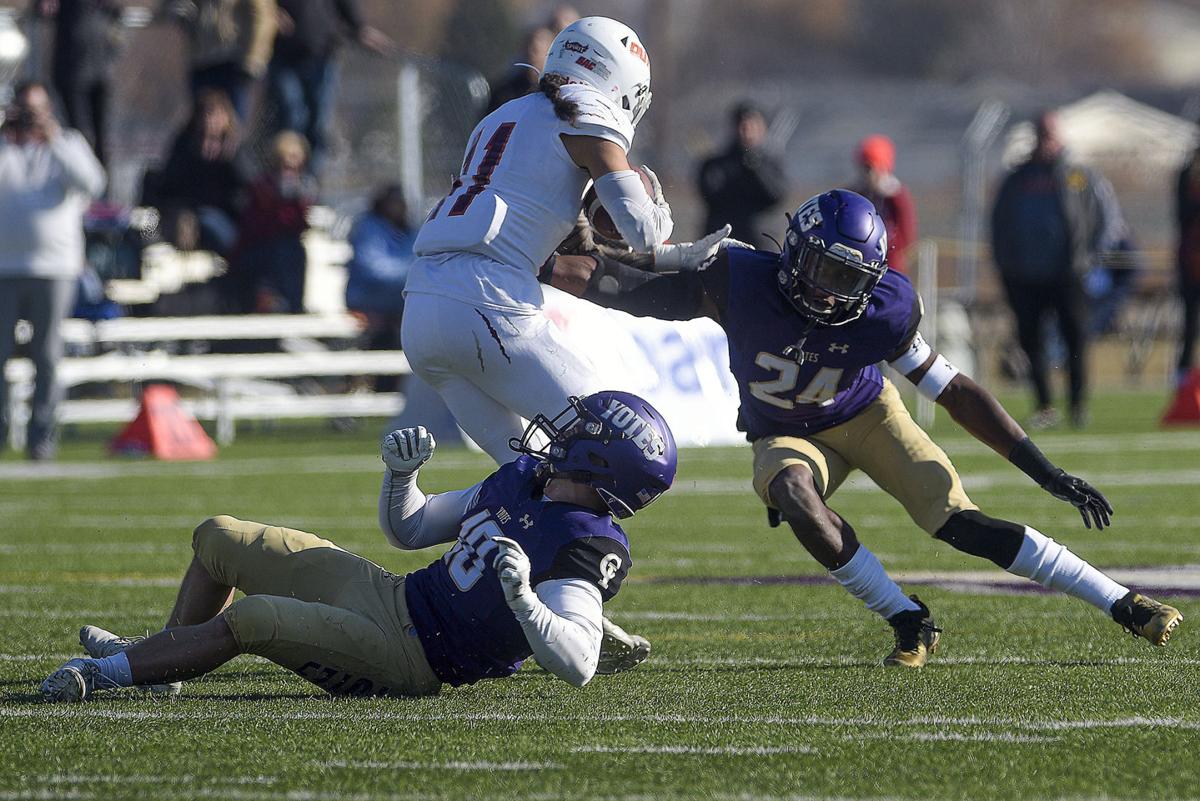 College of Idaho defensive back Taeson Hardin (24) goes in to tackle an Ottawa player during the first round of the NAIA playoffs on Nov. 23, 2019. 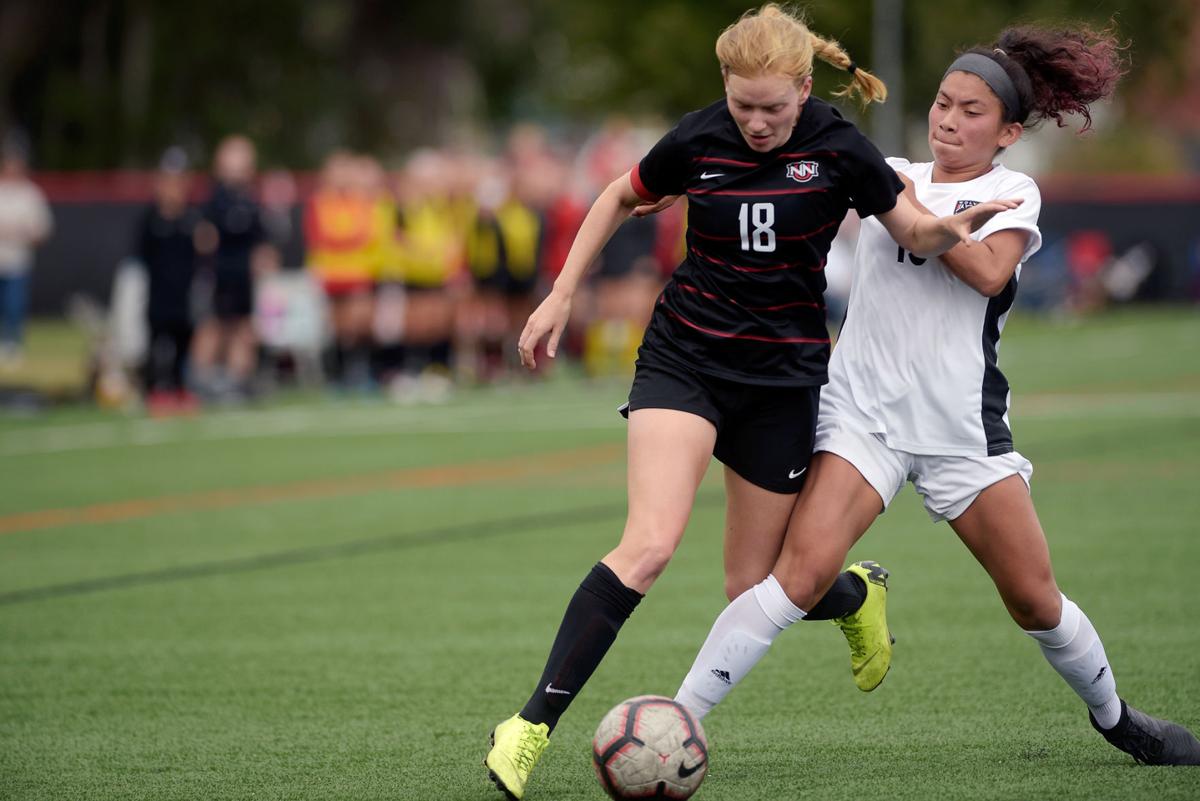 Northwest Nazarene forward Rikki Myers (18) battles with Western Oregon defender Erika Gonzalez Moreno (15) for control of the ball during the game on Sept. 28, 2019.

College of Idaho defensive back Taeson Hardin (24) goes in to tackle an Ottawa player during the first round of the NAIA playoffs on Nov. 23, 2019.

Northwest Nazarene forward Rikki Myers (18) battles with Western Oregon defender Erika Gonzalez Moreno (15) for control of the ball during the game on Sept. 28, 2019.

The will be no college athletics in Canyon County this fall, as both the College of Idaho and Northwest Nazarene had their fall seasons pushed back by their respective conferences Friday.

The Cascade Conference announced the move early Friday afternoon, suspending all athletic competition until at least Nov. 1, at which time the decision will be reevaluated. In addition, the College of Idaho, Southern Oregon and Eastern Oregon announced they would postpone their football season. The three schools are football-only members of the Frontier Conference.

“There's no doubt in my mind that this is what is best for our college campus, for the Caldwell community, for our student-athletes and our coaches,” College of Idaho athletic director Reagan Rossi said. “It gives us the best possible chances of having complete seasons, I truly believe that. The last thing we wanted to have happen is to starts seasons and have to stop them.”

Later in the afternoon the Great Northwest Athletic Conference announced it was suspending all athletic competition through Nov. 30, with a decision regarding the status after that coming by Oct. 15.

“We are sad to learn that the GNAC has suspended fall sports,” Northwest Nazarene volleyball coach Doug English said in a release. “Sad because of the loss of normalcy and the inability to participate in an activity that brings us joy. After following the spread of the COVID-19 over the last month it seemed harder and harder to be able to figure out the logistics that make sports possible in our conference. Because of the diverse geographical locations throughout the GNAC I don’t know if they had another choice.”

In addition to the College of Idaho football team, the announcements move back the seasons for the both the Yotes' and Nighthawks' soccer, cross country and volleyball seasons, as well as fall golf and fall baseball and softball for Northwest Nazarene. For both schools, the decisions will also push back the men's and women's basketball seasons. While neither schools have released basketball schedules, the Yotes have started their season in recent years in October, while Northwest Nazarene begins its season in early November.

For football, Rossi said that the College of Idaho has been working closely with Southern Oregon and Eastern Oregon to come up with a plan if the other five Frontier Conference schools play their season in the fall. The announcement from the GNAC, which sponsors a four-team football league, could also make things easier for the three schools.

“I think you would see us reaching out possibly to the GNAC, if they transition to the spring,” Rossi said before the GNAC's announcement was made. “The (NCAA Division III) Northwest Conference is meeting as well. So there's some options, those schools being predominantly in Oregon and Washington, I think those conferences are going to be in similar situations.”

The Frontier Conference Council of Presidents will meet on July 27. A spokesperson from the conference said that the Cascade Conference's announcement will be an agenda item at the meeting.

Preparations have begun for the Yote teams to hold fall practices, similar to what they have in the spring. Spring practices for these sports ended on March 13 when the College of Idaho suspended all athletic activities.

Rossi said that in the beginning masks will be required and there will be daily screenings of student-athletes, who will be pulled from practice if they do not complete them. She also said practices will start in small groups before slowly working their way up to full-team practices.

“I keep saying we'll set a date and work backwards,” Rossi said. “If we want a scrimmage for basketball with five-on-five, what day do we want to do that, and let's start working backwards. We have one person at a basket, working into small pods where you have three-to-five students working together. And hopefully in a couple weeks when we've been around each other long enough, we can start working towards that five-on-five scrimmage time. Same thing with football, let's work on small pods, work up to seven-on-seven and work up to an 11-on-11 situation.”

The GNAC said in its release that it has already started engaging in active conversations on “providing meaningful seasons of competition for the conference's fall championship sports.”

In a letter from Northwest Nazarene athletic director Kelli Lindley to student-athletes, which was provided to media, she stressed the school's commitment to making sure they get the most out of their experience.

“The NNU Athletics team is committed to doing whatever is necessary to ensure you have a meaningful athletic experience, even if it looks a bit different than the norm,” Lindley wrote. “We are working on creating safe pathways to guarantee each student-athlete can look back on their time at NNU and know it was full of all of the highs, lows, and unforgettable experiences one would hope for as a collegiate student-athlete.”