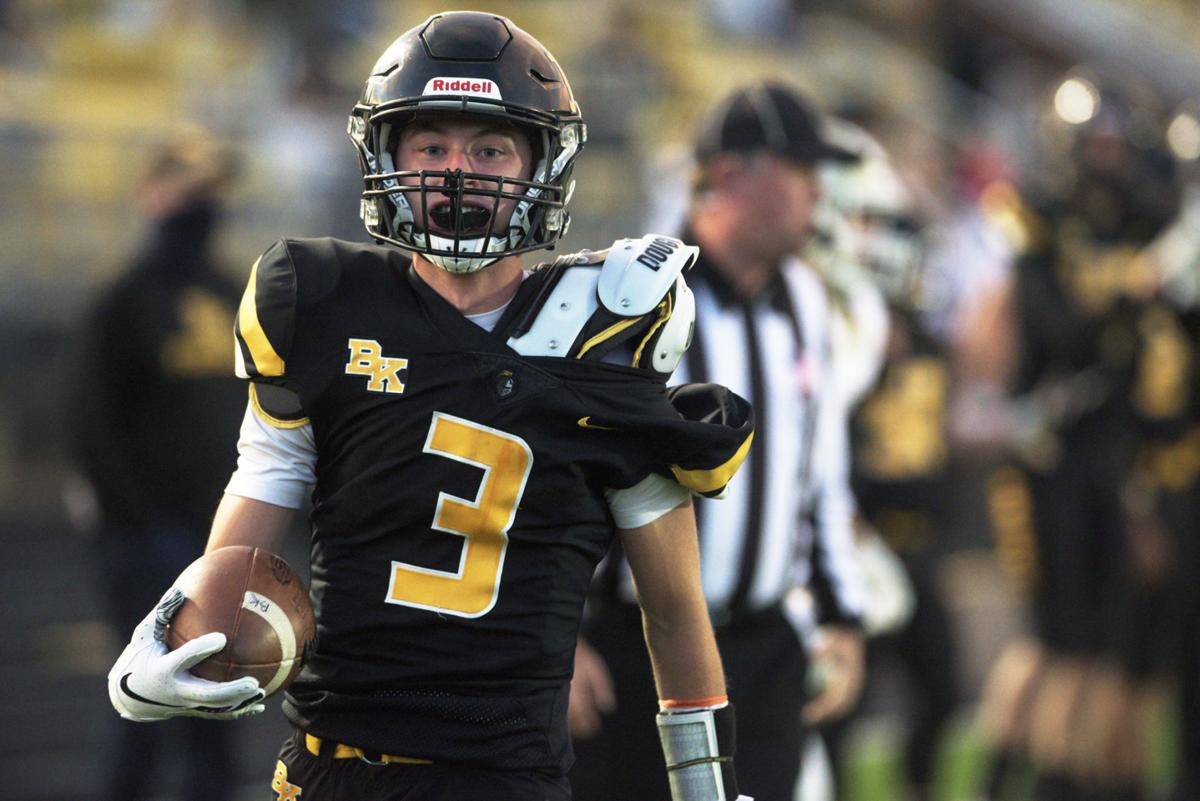 Bishop Kelly wide receiver Jason Buss (3) celebrates after scoring a touchdown against Vallivue in the first quarter of a game on Friday. 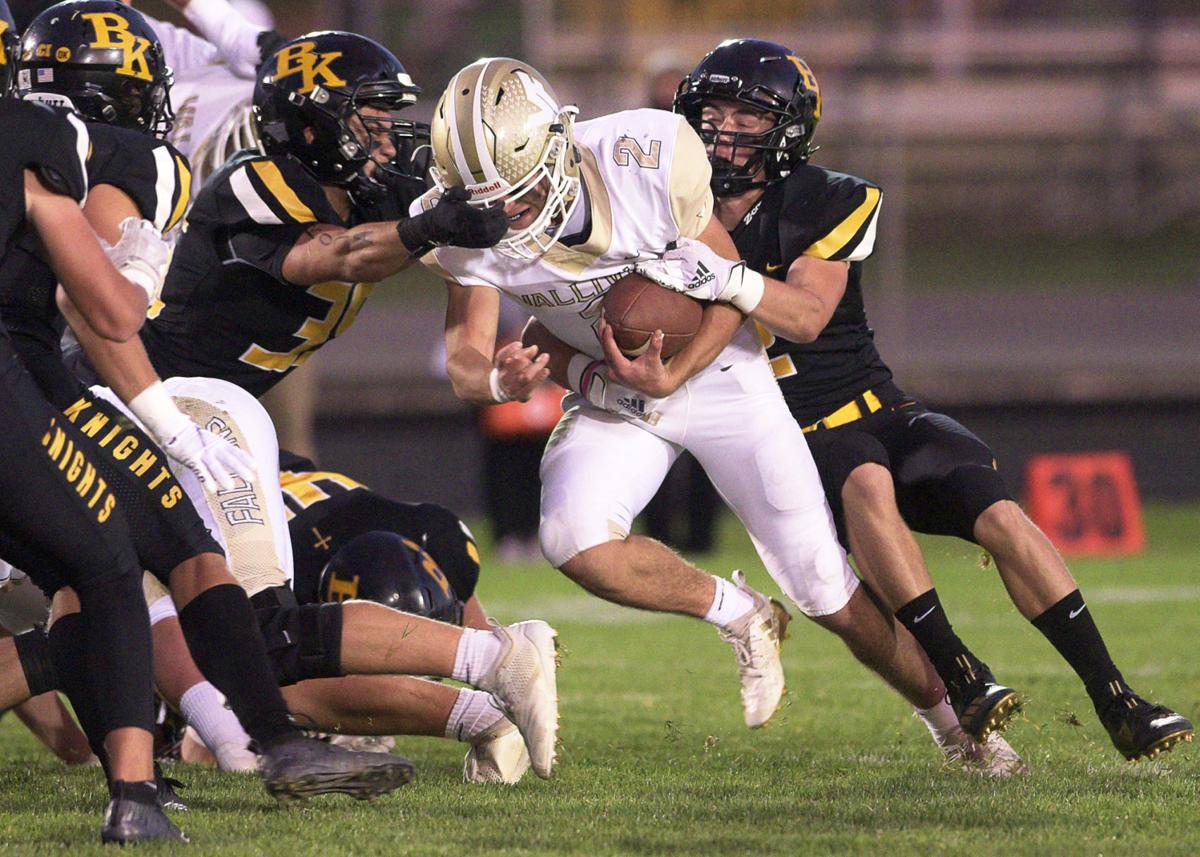 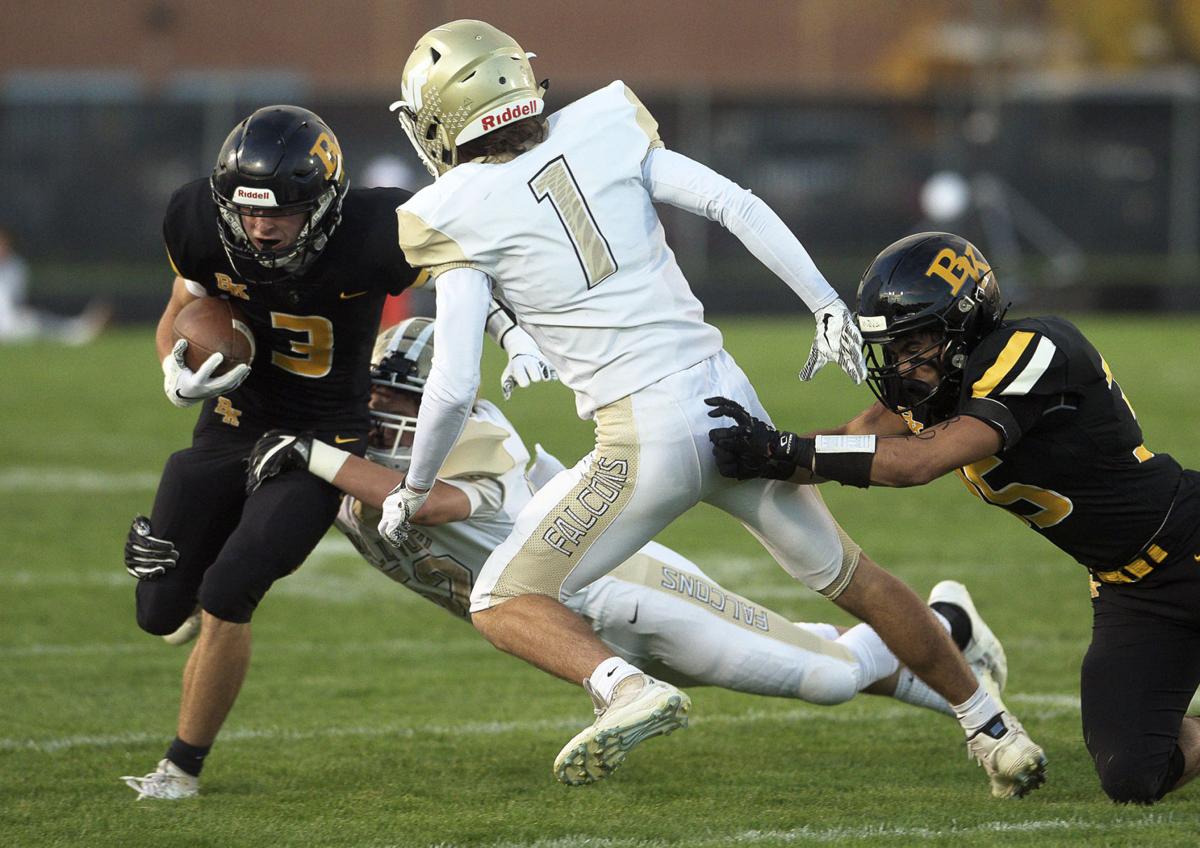 Bishop Kelly wide receiver Jason Buss (3) carries the ball against Vallivue during the game on Friday.

Bishop Kelly wide receiver Jason Buss (3) celebrates after scoring a touchdown against Vallivue in the first quarter of a game on Friday.

Bishop Kelly wide receiver Jason Buss (3) carries the ball against Vallivue during the game on Friday.

BOISE — You dance with who brung ya.

“Yes, our kids were able to execute well tonight,’’ the Knights’ veteran coach said after his team’s impressive 35-12 4A Southern Idaho Conference victory over Vallivue, keeping BK’s conference hopes alive. “We wanted to control the line of scrimmage tonight and we did that.

The Knights responded from the opening kickoff, putting together scoring drives of nine, 14 and eight plays to open a 21-0 advantage at the halftime intermission. The methodical Knights offense ran up 160 yards at the half, but, mainly, kept the ball away from Vallivue, which only managed 22 plays and 76 yards of total offense prior to halftime.

The Knights’ Seth Knothe, who entered Friday’s contest averaging just under 140 yards a game rushing, kept right on pace from the outset. The 6-foot-2, 190-pound junior banged his way to 72 yards at the half on his way to 102.

“I thought we did a nice job up front and he ran hard,’’ Brennan said of his workhorse.

Vallivue finally did get on the board to open the second half, directed by quarterback Casey Cope’s left arm and the receiving of Lincoln Marler.

The Falcons opened with a 65-yard march, capped by Cope’s 21-yard scoring toss to Marler to get Vallivue back to within 21-6 with 7:59 still left in the third period.

“We knew we had to continue to play hard, we said that at half. We knew they’d respond,’’ Brennan said. “Like I said, they’re a good football team. They weren’t gonna roll over.’’

Cope, who rushed for 54 yards and one touchdown, hit on 15-of-26 passes for 132 yards, nine of those catches going to Marler.

But any momentum the Falcons could muster quickly evaporated as Knights quarterback Keegan Croteau executed a perfect third-down screen pass to Knothe, who tore up the Bishop Kelly sideline for a 70-yard scored and a 28-6 advantage late in the third period.

“I’m very excited. This was a great win for us tonight,’’ said Brennan, who watched Croteau hit on 13-of-16 tosses for 165 yards and the two scores, while leading the Knights’ offensive attack. “I’m very excited about the way we took care of business tonight.

“I tell you, this league is tough every year, but this year, there’s five teams that are as good as anyone in the state. It’s going to be interesting.’’

Before the postseason begins, Bishop Kelly will have to finish off conference play at home against Ridgevue while Vallivue looks to bounce back against Emmett.