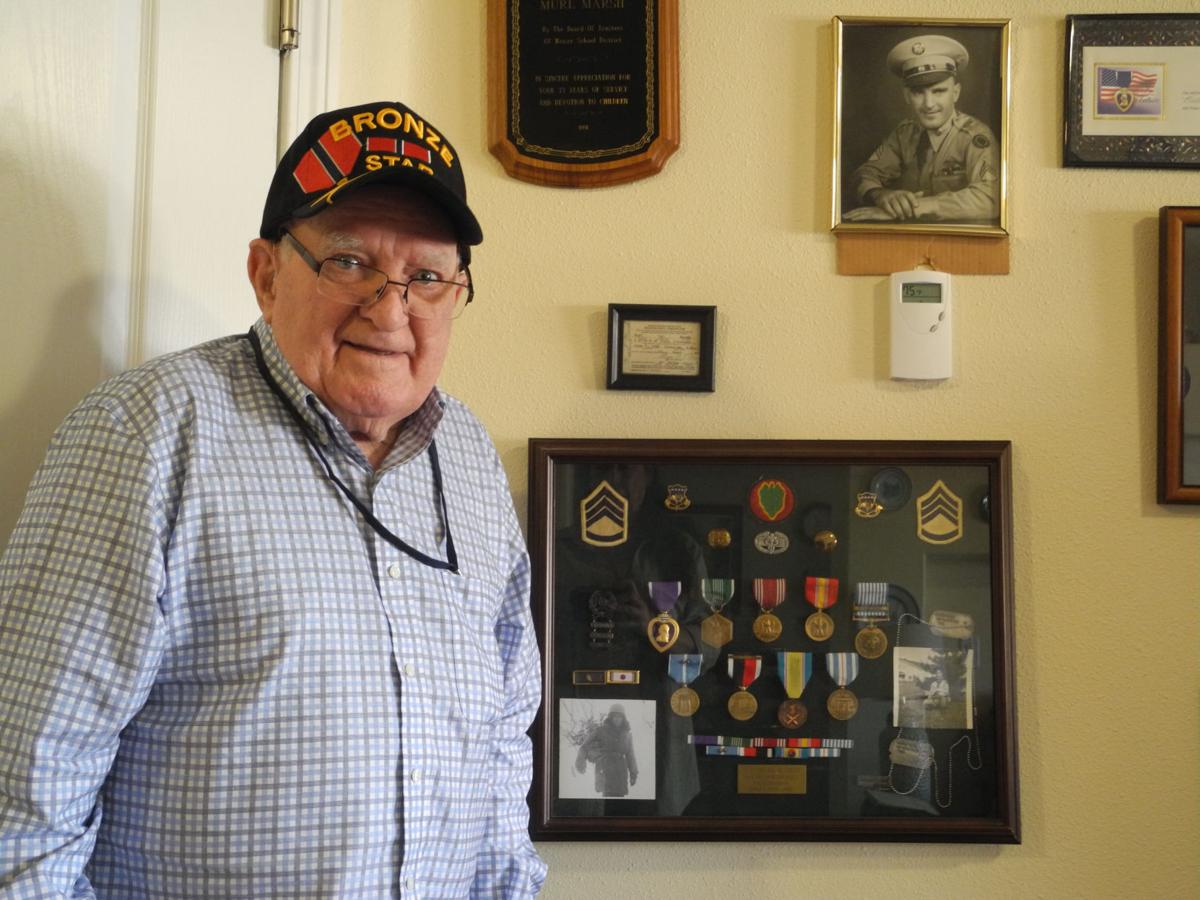 Murl Marsh with his metals — which include a Purple Heart and Bronze Star — earned while he was serving in the U.S. Army during the Korean War in 1951. 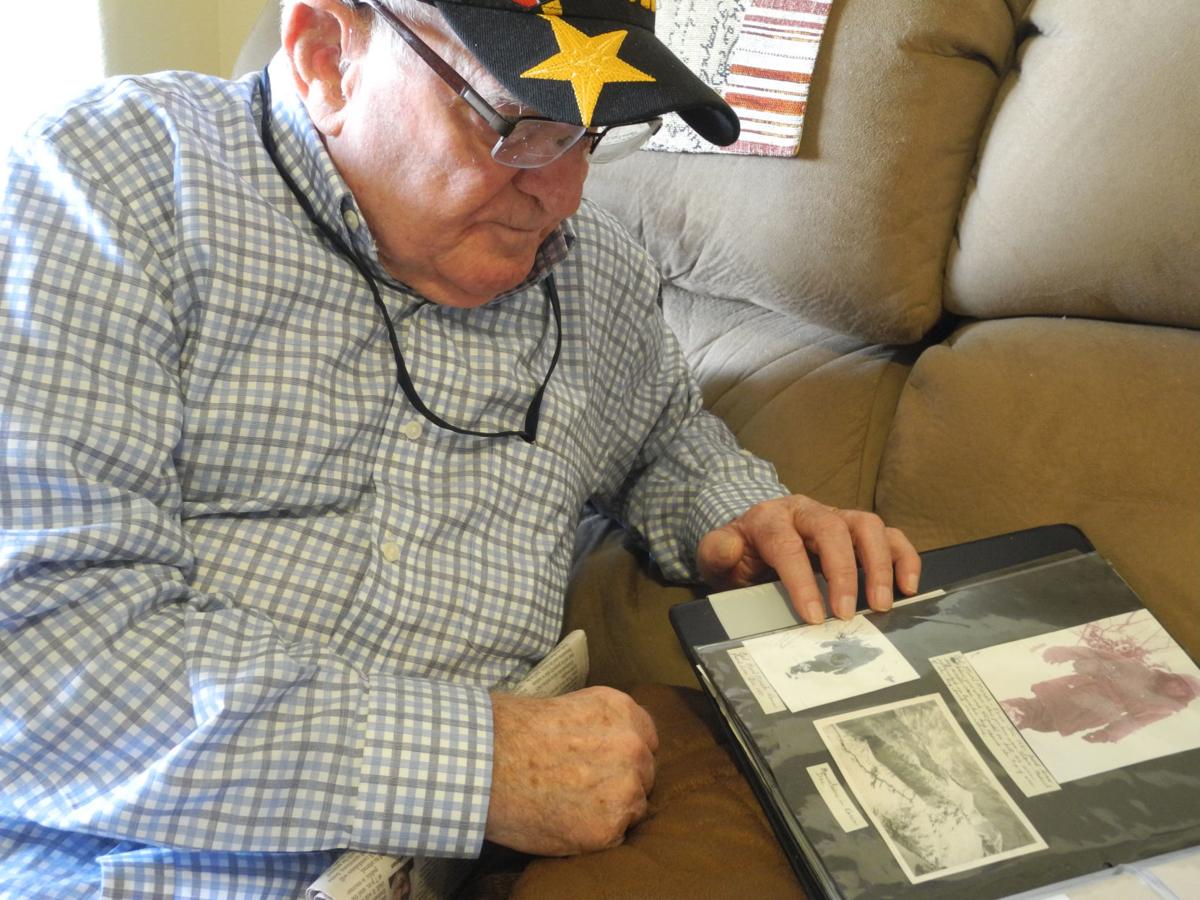 Marsh looks at photos taken the winter he was in the Korean War — a winter with temperatures 35 F below zero.

Murl Marsh with his metals — which include a Purple Heart and Bronze Star — earned while he was serving in the U.S. Army during the Korean War in 1951.

Marsh looks at photos taken the winter he was in the Korean War — a winter with temperatures 35 F below zero.

Drafted when he was 18 and then sent to Korea in 1951, Murl Marsh, of Emmett, did not realize he would spend his time 30 miles north of Parallel 38, deep in North Korean territory. He was wounded for the first time in Operation Nomad, and a second time three months later in the same, steep, rocky terrain.

"The North Koreans came over the hills like ants. Many didn't have weapons. They would grab the weapons of their fallen comrades. They just kept coming," Marsh said.

Operation Nomad-Polar was the last major Allied offensive of the Korean War. Costs were high, at least 1,784 American casualties in 10 days, resulting in 288 deaths. More casualties followed as the enemy tried to regain their positions. Some may be familiar with the Battle of Heartbreak Ridge, one of the engagements.

It was one day at a time for Marsh who was assigned to the U.S. Army, 3rd Platoon, Company G, 2nd Battalion, 19th Infantry Regiment, 24th Infantry Division, Medical Division. His basic training was in Colorado.

Even though he was raised in Colorado, nothing prepared him for the harsh winter conditions of the North Korean mountains. Temperatures dropped to 25 and 35 F below zero. These temperatures were made more difficult because most days — and nights — were spent in open trenches, covered in snow.

"I did have nice, warm clothing," he said.

However, the harsh weather conditions were nothing compared to the job in the medical division.

"I helped hundreds of soldiers. I would sometimes be standing right beside them when they were shot," Marsh said quietly. "My lieutenant was shot right through the heart. Dropped right beside me."

The badly wounded were loaded in a helicopter for a ride out.

"My very first patient was a man who lost his leg above the knee. It was one in the morning, dark as it could be. I threw him over my shoulder and carried him out."

Years later at a military reunion, Marsh met one of the men he carried off the hill. Marsh was asked why he didn't have his Purple Heart, even though paperwork was filed in 1951. So, in 1998, Marsh started writing letters to ask "Why?"

Both of his wounds occurred when he was helping another soldier. The first wound on Oct. 16, 1951, near the crest of Hill 585 was from a hand grenade to his shin. He received a Bronze Star for his service on that day 53 years later in 2004.

Marsh returned to carrying wounded out a couple of days later. Then on Dec. 31, 1951, he received a mortar wound to his knee. This injury plagues him to this day.

"In Korea, they sewed me up with parts of my uniform in the wound," Marsh said. "Probably why it wouldn't heal. I came home in bandages. I went to a VA Hospital in Grand Junction, Colo."

He had two operations in Korea, two in Japan and two knee replacements in the United States.

In 2004, he finally received his Purple Heart. Just three years ago, he started receiving disability for the knee wound.

During the war, letters from home kept him going. His mother and sister would write nearly every week, often sending cookies.

Food was good, even if it was C-rations. Day after day, month after month canned beans, canned hash, canned peaches, canned diced fruit and coffee. Each box of food came with a small chocolate candy bar and a package of cigarettes. Marsh likes chocolate, so he would trade his cigarettes for the chocolate. He smiled at the memory.

While in the service, Marsh took many photographs. He enjoys looking back, with fond memories of each person and event.

Source: Some information for this article came from The 24th Infantry Division Association.