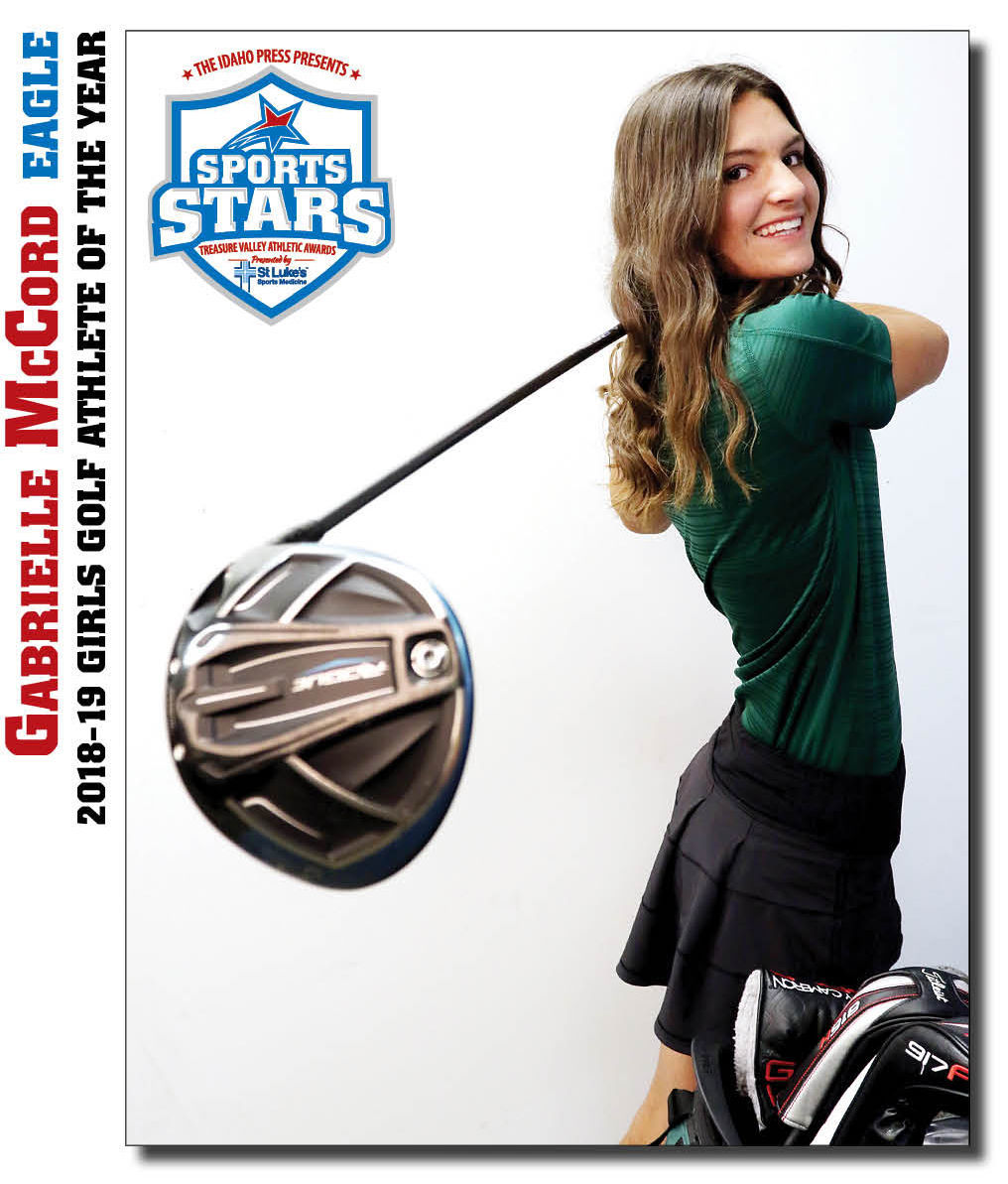 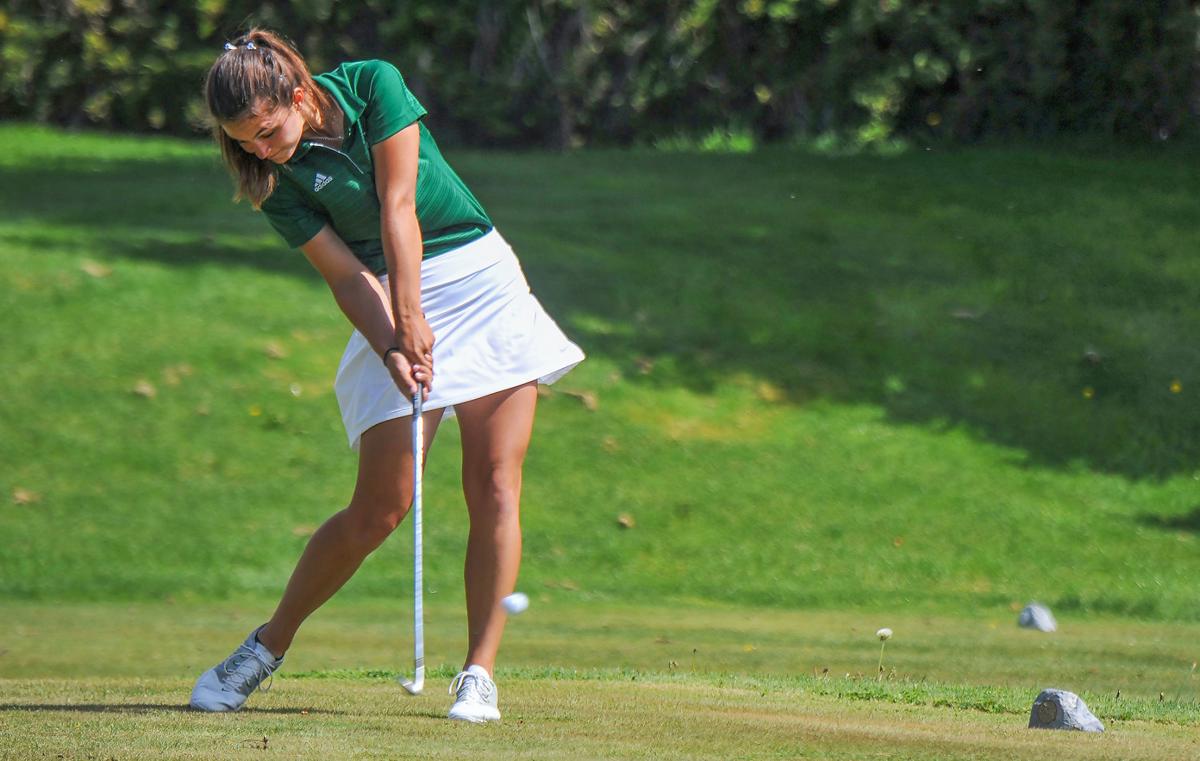 Eagle’s Elle McCord hits on the tee box at hole 14 during the 2019 5A golf state championships on May 14, 2019, at Highland Golf Course in Pocatello. 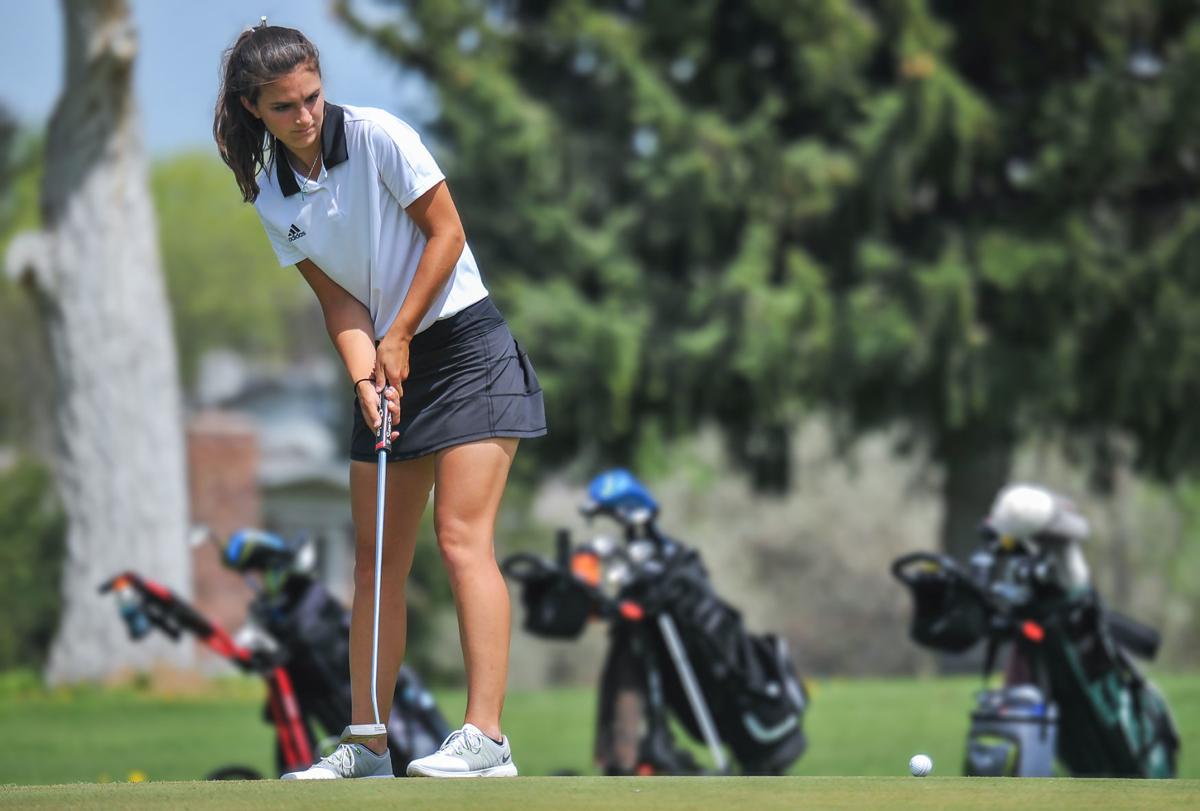 Elle McCord putts for birdie on the 10th green at the 5A State Golf Championships on May 13 at Highland Golf Course in Pocatello.

Eagle’s Elle McCord hits on the tee box at hole 14 during the 2019 5A golf state championships on May 14, 2019, at Highland Golf Course in Pocatello.

Elle McCord putts for birdie on the 10th green at the 5A State Golf Championships on May 13 at Highland Golf Course in Pocatello.

Gabrielle McCord wasn’t exactly a household name before this season.

The Eagle High girls golfer was barely a year into her career and hadn’t so much as won a single match or tournament.

What a difference a year makes.

The Mustangs repeated as 5A District III and state champions with McCord leading the way. The junior won three tournaments, including district and state titles.

For these achievements, McCord is the 2018-19 Idaho Press’ Sports Stars Girls Golf Athlete of the Year.

“She was very crucial to our success,” junior Elle Smith said. “We wouldn’t have been as good this year without her that’s for sure. She definitely helped our team score by a ton, so I couldn’t think of a better person to share a name with. She’s the best.”

McCord wasn’t a well-known commodity because golf was never meant to be a priority in the first place. The Meridian native wanted to be a catcher for the University of Oregon instead. She only played golf between softball and basketball trips. That was few and far between.

But moving to Belize when she was 12 changed everything.

While there was surfing and scuba diving, McCord gravitated back toward golf. So much so that she played in neighboring countries like Guatemala and Honduras as well.

“It’s where I really discovered my love for golf,” McCord said. “My life was so busy before that I felt like I didn’t have time to really sit back and enjoy something. So golf just became super relaxing for me. I started seeing the overall beauty of it.”

McCord came back to Idaho for the start of her freshman year. She joined the Eagle golf team the following year.

However, that first season left much to be desired.

Her average 18-hole score hovered in the mid 80s and even got into the 90s a time or two. It resulted in McCord being the team’s No. 3 golfer.

The Mustangs ended a 14-year state championship drought that year, but did so without McCord’s score. The worst score is thrown out.

“I don’t even remember where I finished. What’s the lowest you can finish?,” McCord said.

“I was in a funk almost,” McCord said. “It was like, ‘What am I doing? You’re better than this.’ Golf is an interesting sport. It’s very mental and can really get in your head.”

So McCord spent that summer playing at Idaho Golf Association events. She was shooting in the mid 70s by the end.

Still, McCord was the No. 3 golfer again coming into this season. But that didn’t last long.

The turning point came at the Eagle Invitational at Banbury Golf Course on April 15. McCord held off teammate Brooke Patterson by a stroke for her first ever win.

She then anchored Eagle to a second straight district title by earning medalist honors at the RedHawk Golf Course in Nampa three weeks later. The win made her the Mustangs’ unquestioned No. 1 golfer heading into the 5A State Tournament at Highland Golf Club in Pocatello.

She was just a shot back of Patterson and last year’s state runner-up, Emily Cadwell of Boise, with a 2-over 76 on the first day.

McCord and Patterson were tied with three holes left on the final day. McCord was just walking up to the par-5 No. 7, arguably the course’s most difficult hole, when rain started falling.

She birdied the hole.

McCord then parred the 8th to take a one-shot lead into the final hole, the par-4 No. 9.

But she ran into trouble with her first two shots. Her tee shot landed underneath a tree before she hit into a sand trap.

“I was so nervous,” McCord said. “It was already nerve-racking enough to have everyone watching you. But I just took a moment to breathe. I thought back to last year and how I had come too far to lose it now. Once you hit a bad shot, there’s nothing you can do about it, except hit a good enough next shot to recover yourself.”

That’s exactly what she did.

McCord hit the ball out of the bunker to within three feet of the hole. But it wasn’t a gimme. The ball was downhill of the hole.

She made it look easy though. McCord sunk the putt for par and the state title. The 16-year-old finished the round with a 1-over 75 for a 36-hole score of 151. Eagle also won the team crown by 31 strokes over Rocky Mountain for its second championship in a row with a 641.

“I was kind of in denial about what had just happened until everyone started coming up to me saying, ‘Congratulations,’” McCord said. “It really didn’t feel real. I was in disbelief for a while before being hit with all kinds of emotions. I gave up everything for this, so to win it was pretty amazing.”

McCord will play in several IGA Tournaments and even a United States Golf Association qualifier this summer.

After all, everyone knows her name now.