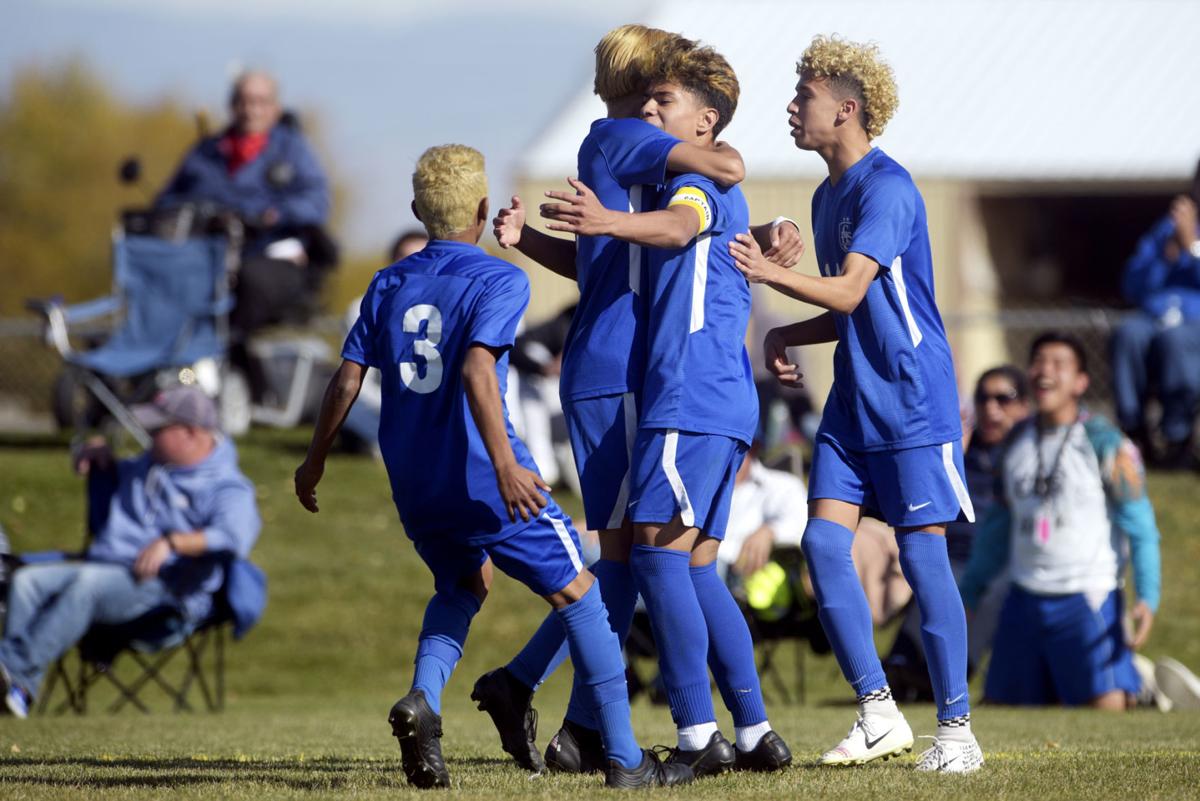 Caldwell soccer players celebrate a goal during the first round of the Idaho state soccer tournament on Oct. 24. 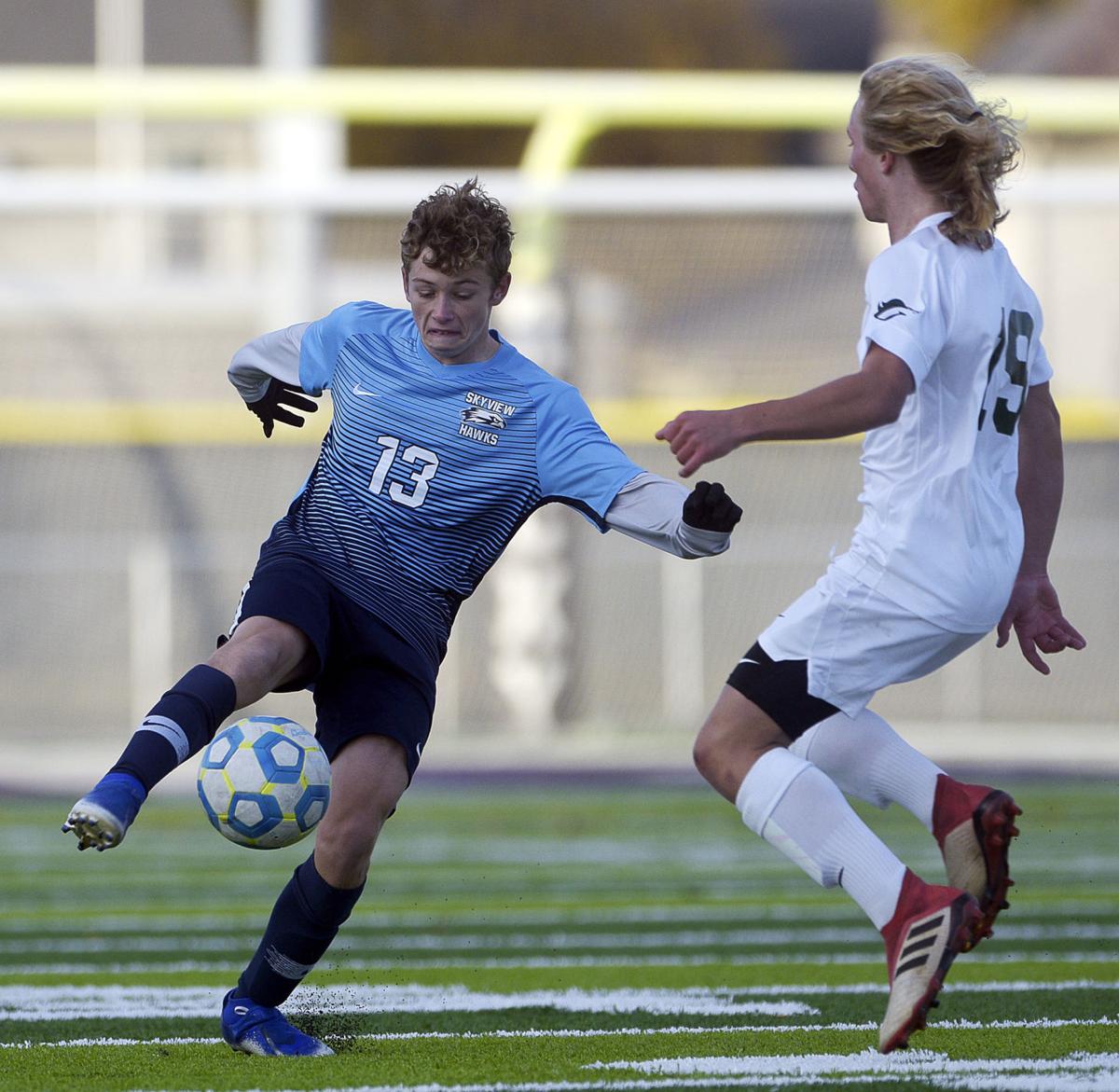 Skyview forward Camden Chandler (13) dribbles the ball down the field during the 5A championship soccer match against Eagle on Oct. 26. 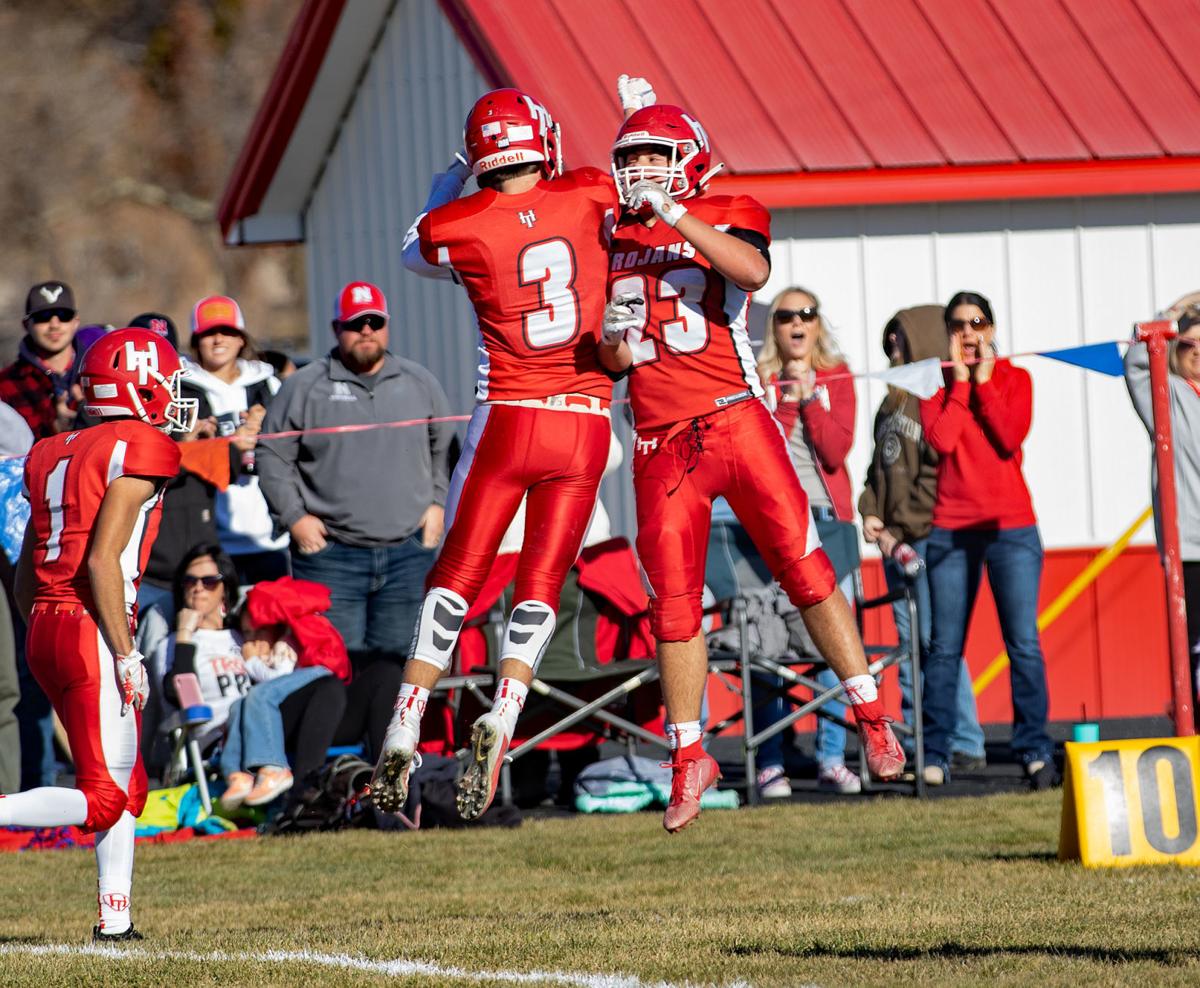 Homedale celebrates a touchdown against Timberlake during the 3A state semifinals on Nov. 16.

Caldwell soccer players celebrate a goal during the first round of the Idaho state soccer tournament on Oct. 24.

Skyview forward Camden Chandler (13) dribbles the ball down the field during the 5A championship soccer match against Eagle on Oct. 26.

Homedale celebrates a touchdown against Timberlake during the 3A state semifinals on Nov. 16.

Rhys Yeakley was just hoping to win 11 games to get to his 100th win this season.

The Caldwell High School boys soccer coach got that and then some.

Despite having to break in 10 new starters, the Cougars had another magical year. They went 19-2-1 on their to taking home 4A Southern Idaho Conference, District III and state titles for the second year in a row.

For these accomplishments, the Caldwell boys soccer is the 2019-20 Idaho Press Sports Stars Canyon County/Surrounding Areas Boys Fall Team of the Year.

Caldwell won its first state championship in 22 years last season. And for Yeakley, that was going to be enough while he rebuilt the team this season.

But to his surprise, he quickly realized this was another special group.

The Cougars won the first 10 games by an average of more than four goals to extend their unbeaten streak from last season to 32 games. That was only just the beginning.

While Caldwell did suffer a pair of losses to Middleton and Vallivue, it closed the year with eight straight wins, including claiming their fourth district title in five years. The big one came a week later, though.

After squeaking by Hillcrest 1-0 in a rematch of last year’s state final, the Cougars downed Moscow 3-1 to once again punch their ticket to the championship game.

They became the first 4A team in a decade to repeat after Eric Lozano, who almost quit the team earlier in the season, scored a golden goal on a free kick from 40 yards out in a 2-1 overtime win over Jerome.

Caldwell averaged more than four goals per game this season with a point differential of 3.2. It allowed just 1.3 goals per game, including just six during the final month of the season, as well.

The Cougars have now won five league crowns, four district championships and have brought home five state trophies, including two state tiles, since Yeakley took over in 2013. They are 108-26-17 — the best record by any 4A team during that time span.

HOMEDALE FOOTBALL: The Trojans made back-to-back state finals for the first time since 1999. But the first state championship in 22 years once again eluded them. Sugar-Salem beat Homedale for the title for the second year in a row. This one was 48-14.

However, that was the lone hiccup in an otherwise spectacular season. Homedale won the 3A Snake River Valley Conference title for the second straight year and the third in five seasons. It's won 20 consecutive regular seasons games going back to 2017.

SKYVIEW SOCCER: Despite not winning a game until seven games in, the Hawks (9-8-3) came within a double overtime win of pulling off a remarkable Cinderella story. They fell 2-1 to Eagle in the 5A state championship for a runner-up finish.

Skyview still won 5A state tournament games for the first time in program history and ended the season of Rocky Mountain — last year's champion. It also upset Boise, the SIC champion, at districts.