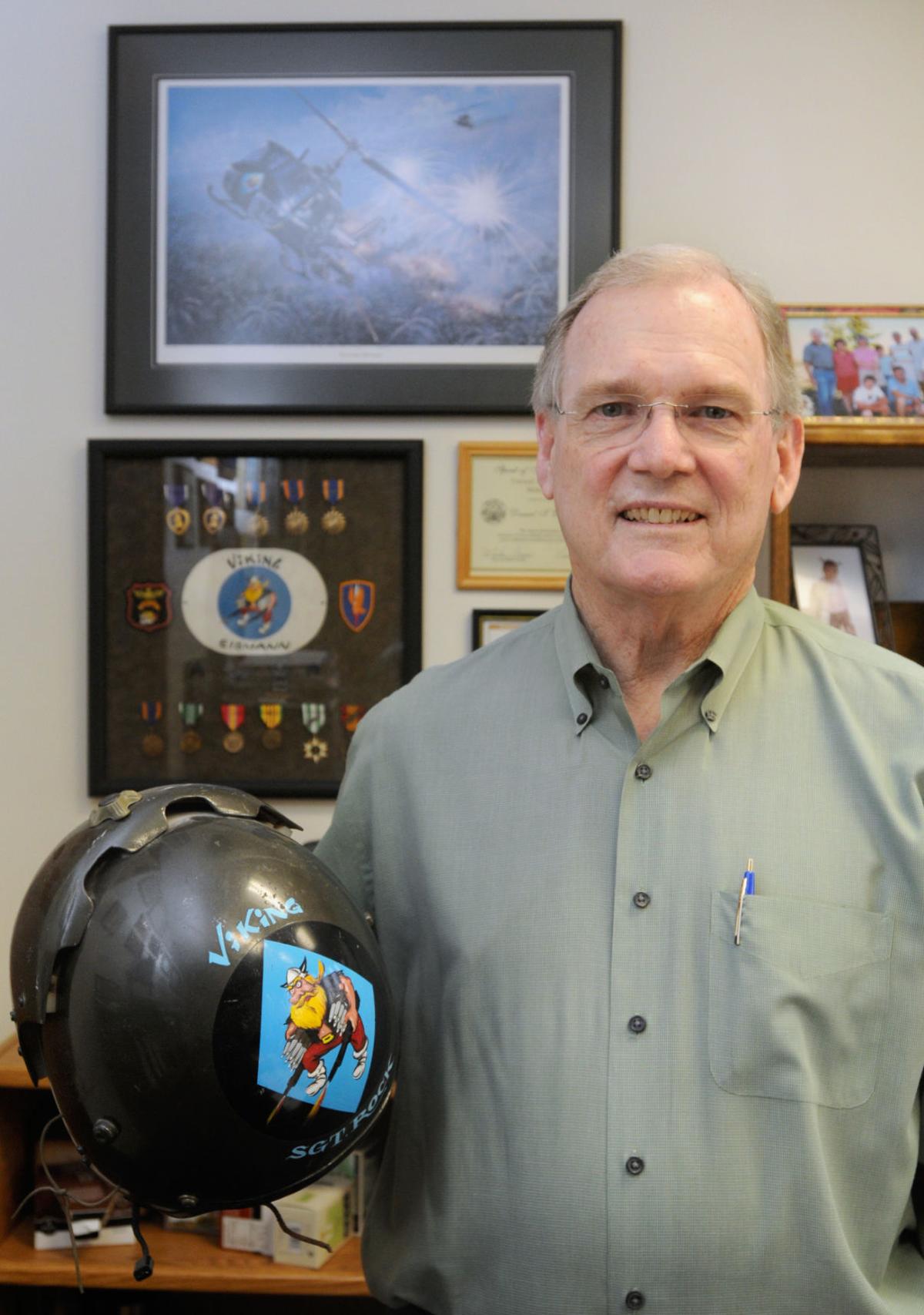 Supreme Court Justice Daniel Eismann obtained a law degree from the University of Idaho after returning from Vietnam. 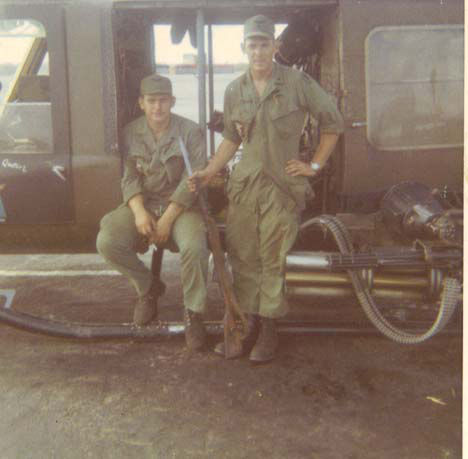 Daniel Eismann and one of his gunners standing by his Huey gunship. 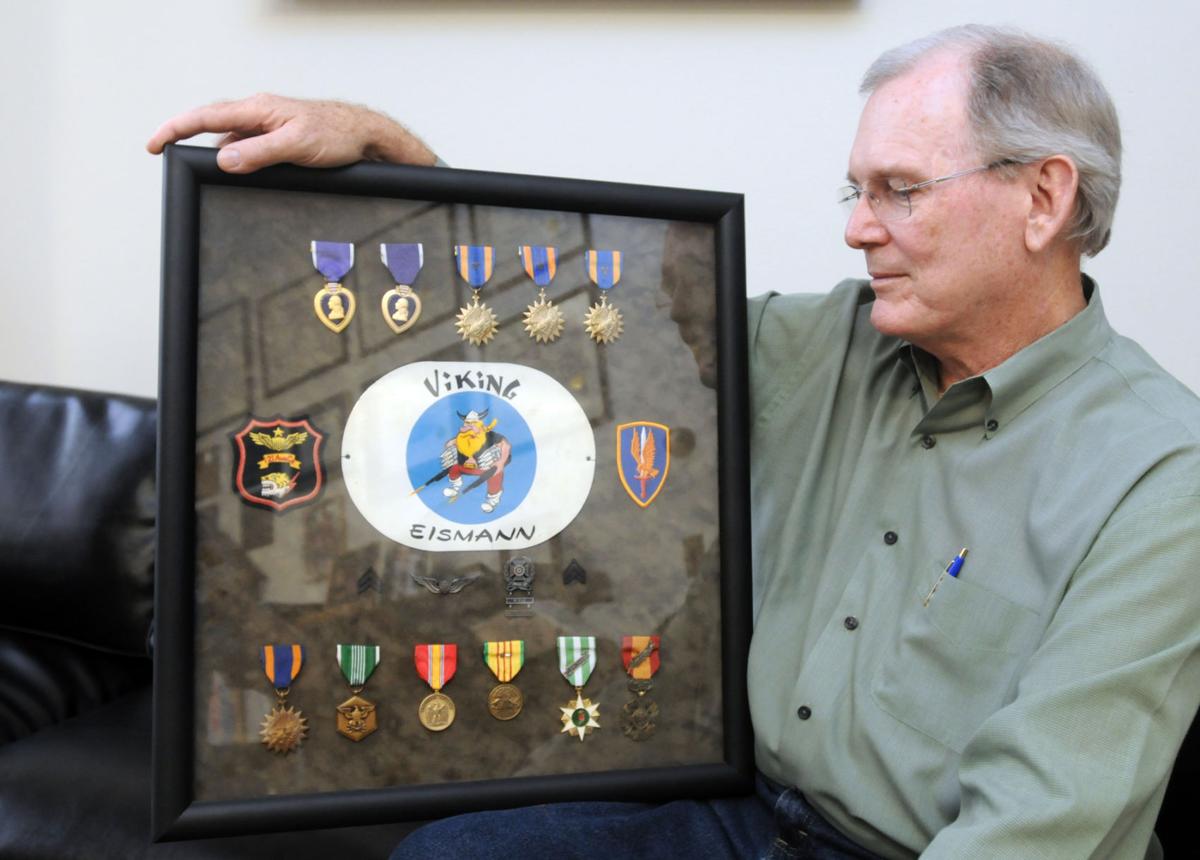 Daniel Eismann was awarded three medals for heroism and two Purple Hearts for his services in the U.S. Army during Vietnam. 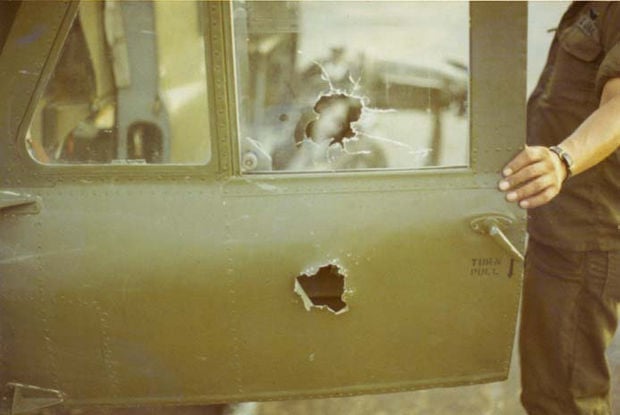 Exit hole made by a .51-caliber machine gun bullet in the copilot’s door of Eismann’s gunship. 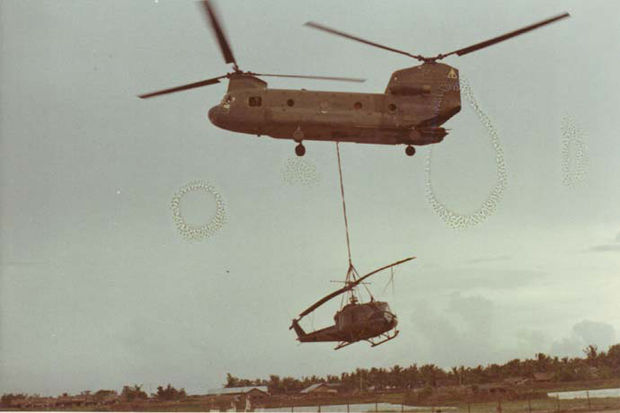 Because Eismann’s gunship was too damaged to fly, it was hooked to a Chinook helicopter to be transported back to base.

Supreme Court Justice Daniel Eismann obtained a law degree from the University of Idaho after returning from Vietnam.

Daniel Eismann and one of his gunners standing by his Huey gunship.

Daniel Eismann was awarded three medals for heroism and two Purple Hearts for his services in the U.S. Army during Vietnam.

Exit hole made by a .51-caliber machine gun bullet in the copilot’s door of Eismann’s gunship.

Because Eismann’s gunship was too damaged to fly, it was hooked to a Chinook helicopter to be transported back to base.

It was as little as seven days, depending on who you talk to. That was the average lifespan of a crew chief on a Huey gunship during the Vietnam War.

But nothing is too surprising for a man who has been defying the odds for nearly 40 years.

Ironically, Eismann’s story began by ignoring the odds, not beating them. In 1967, after two years at the University of Idaho, he enlisted in the Army at a time when many young men were desperate to avoid being drafted.

“I just wanted to serve,” said Eismann, who grew up in Homedale and graduated from Vallivue High School.

He got what he wanted, but in one of the most dangerous roles in the war.

The UH-1 Iroquois helicopters, or “Hueys,” were commissioned to fly close to the ground and attract gunfire from the North Vietnamese and their southern allies, the Viet Cong. The goal was to show the Americans’ South Vietnamese allies where enemy ground forces were located.

At times, it seemed the shooting would never end. During particularly high-volume skirmishes, Eismann would fire more than 10,000 machine gun rounds in a single day.

“My job was to go help people, and that meant taking a lot of fire,” he said.

For his efforts, Eismann received three medals for heroism and two Purple Hearts, which are given for wounds sustained in combat. He almost died earning that first Purple Heart.

Eismann and his crew were flying back from a mission. Soon, he grew drowsy and decided to lie down on the ammunition boxes adjacent to his seat. One second later, a 50-caliber round ripped through the helicopter.

“Had I not moved, it would have hit me in the Adam’s apple.”

For Eismann’s second Purple Heart, he actually was wounded twice — and didn’t bother to notify anyone until the day was done. First, he ignored the shrapnel that lodged itself in his lower leg. He remained quiet after more shrapnel tore into his side 15 minutes later.

“I wasn’t dying and figured I could still shoot, so I didn’t tell the pilot,” he said.

Through many months of constant danger, Eismann survived. He returned to the U.S. in 1970 and enjoyed a rather quiet transition back into civilian life. He even resumed his studies at the University of Idaho. But it wasn’t all fun and pep rallies, especially for some of Eismann’s fellow soldiers.

“I had friends who were spat upon when they returned,” he said, noting that some Vietnam vets have been a bit jealous of the outpouring of support for servicemen and servicewomen returning from Iraq and Afghanistan.

Eismann didn’t feel welcome at college, either, during a time when anti-war sentiment was at its boiling point. For the most part, he kept quiet and pressed on.

After finishing his bachelor’s degree in sociology, he also obtained a law degree from UI — following the path of his dad, who’s 89 and still a practicing attorney.

Eventually becoming a judge, Eismann has been able to build upon his natural inclination to serve — the same urge that led him into the military nearly 40 years ago.

“In Vietnam, our job was to risk our lives to try to protect other people,” he said. Many of his decisions have been rooted in that devotion. Eismann has been a strong voice for issues such as domestic violence, mental health and veteran services.

He also was instrumental in the formation of Ada County’s Drug Court and helped pave the way for the Idaho Drug Court Act. Drug courts offer nonviolent, substance-abusing offenders a court-monitored treatment program instead of jail time.

It’s a well-proven way to help people in trouble overcome the odds against them.

Eismann’s own story is about beating the odds — again and again. It happened again six years ago, when Eismann was given six weeks to live. He was diagnosed with non-Hodgkin lymphoma, a form of cancer that some link to the spraying of Agent Orange during the war. The military used the chemical to help thin out the thick, cumbersome foliage in which the Viet Cong often hid.

After four types of chemotherapy, Eismann has vastly outlived the grim diagnosis he received at the time. The doctors are flummoxed, saying the cancer is gone. That means more precious time to spend with his wife, three married children and four grandchildren.

To Eismann, his remarkable healing isn’t such a mystery. He credits God with sparing his life on numerous occasions.

“The biggest thing is that you can trust God in all circumstances,” he said.

From supplying food or ammunition to saving life after life as a medic on the front lines, Eismann thanks everyone who has helped uphold Americans’ freedoms.

“Everyone who has served in our military has sacrificed something.”