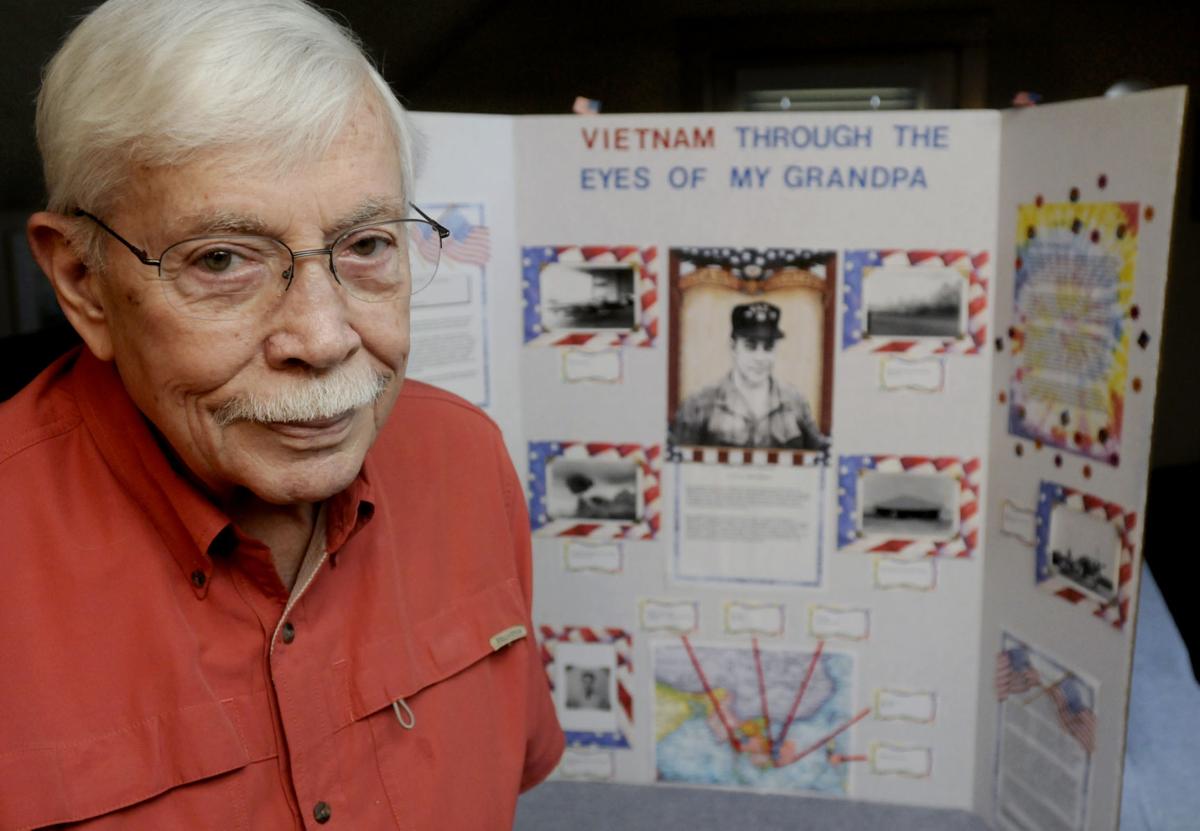 Jim DuFrain, of Nampa, was an Air Force Master Sergeant during the Vietnam War. DuFrain did electronics, avionics, radio and radar repairs on aircraft in South Vietnam during the war. 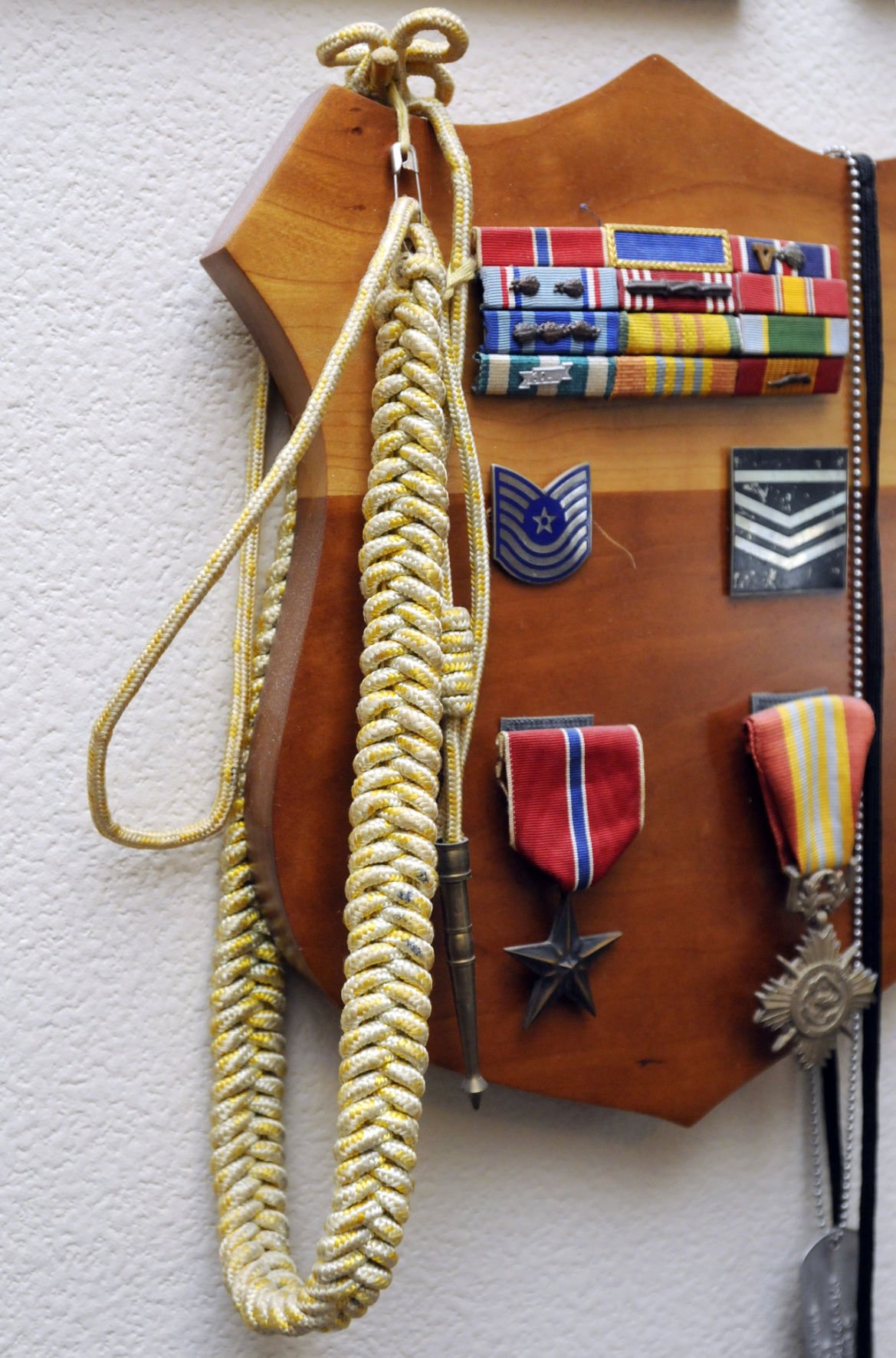 A Fourregere, a yellow rope military award, was given to DuFrain by the South Vietnamese during the Vietnam War. 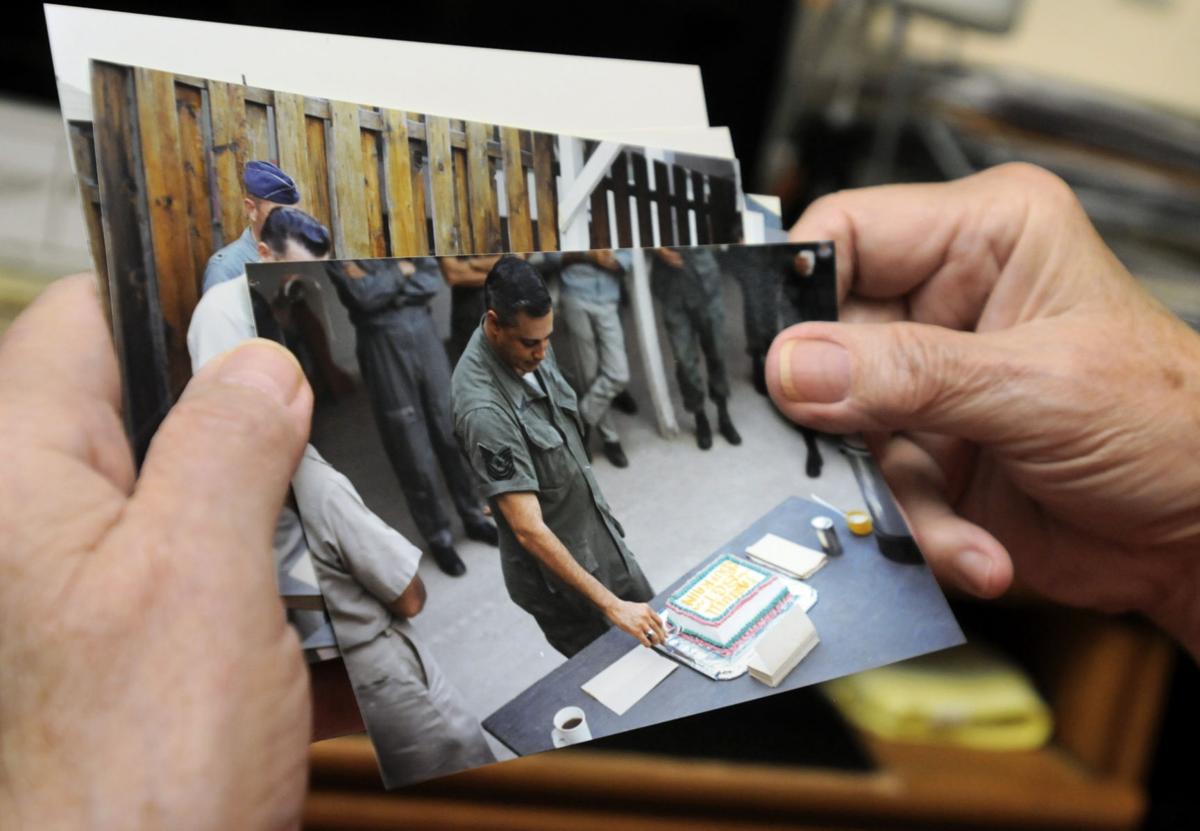 Jim DuFrain, of Nampa, holds a photo of himself taken during a going away party for his unit in August 1970 during the Vietnam War. DuFrain did electronics, avionics, radio and radar repairs on aircraft in South Vietnam during the war. He taught South Vietnamese how to fix their own aircraft.

Jim DuFrain, of Nampa, was an Air Force Master Sergeant during the Vietnam War. DuFrain did electronics, avionics, radio and radar repairs on aircraft in South Vietnam during the war.

A Fourregere, a yellow rope military award, was given to DuFrain by the South Vietnamese during the Vietnam War.

Jim DuFrain, of Nampa, holds a photo of himself taken during a going away party for his unit in August 1970 during the Vietnam War. DuFrain did electronics, avionics, radio and radar repairs on aircraft in South Vietnam during the war. He taught South Vietnamese how to fix their own aircraft.

Before he became an Air Force master sergeant, he was a boy, at home with his dad, fiddling with tools and gadgets.

It’s been a lifetime of tinkering for Jim DuFrain.

“When I first met Jim, I was impressed because he could do anything,” said Cathy DuFrain, who has been married to Jim since 1989. From cooking and doing the laundry to fixing cars and working with computers, Jim was a guy who simply got things done, she said.

It was that combination of inclination and effort that molded Jim into an aircraft technician, a wartime trainer of men foreign and domestic and a private-sector engineer, minus the degree in engineering.

“When I got out of the military, I had the confidence and the skills to do virtually anything,” Jim said.

It was a decades-long education.

For Jim, it started during those memorable moments with his father, a do-everything handyman whose day job was in the instrumentation division at a mill in Colorado.

“When anything went wrong, they would come get dad, and he would fix it,” Jim said.

In 1953, Jim was at the age of 18 and figured he’d be drafted into the military anyway, so he enlisted in the Air Force. An extensive testing process told the Air Force what he already knew: He was good at math and well-qualified to become an avionics technician. Avionics is the electronic systems used in aircrafts, including communication and navigation.

Jim was trained in his new specialty, then spent time at numerous bases in the U.S. and abroad before landing at Yokota Air Base in Japan.

That’s where he heard the first rumblings of involvement in Vietnam. Little did anyone know that more than 58,000 Americans would die in the conflict between the Communist country of North Vietnam — aided by its Viet Cong southern allies — and South Vietnam and the U.S.

In 1962, Jim was sent back to the U.S., to Paine Field in Everett, Washington. The crew there supported the F-102 aircraft that provided air cover for the Northwest.

Around 1965, 10 of the F-102s were sent to Portland Air Field and fitted with in-flight refueling booms. Soon those planes, along with enough airmen to provide support, were assigned to Da Nang, Vietnam. War was taking shape.

THE MOST REWARDING JOB

Jim was headed for Da Nang in 1966, but protests there diverted his plane to the Philippines. He stayed there for two years, educating airmen on the nuances of electronic systems and supporting four bases in Vietnam and one in Thailand.

Later, Jim was sent to Clinton Sherman Air Base in Oklahoma, where he was one of the few servicemen not required to join the unit in Guam for temporary support of the South Vietnamese. He wasn’t keen on his duties of painting and scrubbing the shops at an empty air base, so he volunteered to serve in Vietnam. It was 1969.

For the next year, Jim served as an instructor and adviser to the South Vietnam Air Force in Da Nang. His role was to teach the allies how to maintain their own aircraft, which had been given to them by the U.S. There were many challenges to overcome.

For one thing, the fuel gauges didn’t work. Each vehicle had a “black box” for navigation and communication, but the South Vietnamese didn’t know how to repair them. It was Jim’s job to teach them how to fix these problems themselves.

“That was probably the most rewarding job that I had in the military.”

Jim’s counterpart, a South Vietnamese Air Force captain, was so appreciative that he took the air conditioner from his office and put it in Jim’s shop. In habitually hot and humid Vietnam, this was a prodigious gesture.

Another one of Jim’s South Vietnamese colleagues presented him with the Fourragère award, a yellow braided rope that is worn around the left shoulder. Jim was told he’s the only American to receive this honor.

For his meritorious service, the U.S. gave Jim the Bronze Star.

A short stint in Thailand was Jim’s final bit of service overseas before returning home, to Fairchild Air Base in Spokane. He retired a year later. At 38 years old, Jim had served his country for 20 years.

Seattle-based Boeing, a giant aircraft manufacturing company, offered Jim private-sector employment even before he was officially retired. It was a good-paying, reliable job as an electronics tech, so Jim took it. But his particular duties were far beneath what he was accustomed to, he said.

“It was like going back to the first years of service,” he said

Eight years later, Jim was promoted by a Boeing engineering group, giving him an opportunity to help fix problems. He was a tinkerer once more.

“If there was anything no one else could solve, I got to work on it,” said Jim, whose avionics experience in the military translated well into his work at Boeing.

Jim was virtually the only one of his engineering colleagues without an actual degree in engineering, but none of them held that over his head, he said — partly because his capabilities and eagerness were so broad. The many tasks he took upon himself included orienting new hires and encouraging disgruntled young co-workers.

“I don’t know anything I did that wasn’t useful,” Jim said.

A DIFFERENT KIND OF ENEMY

Jim and Cathy, who both retired from Boeing after decades, moved from Washington to Nampa nine years ago. They’ve had their ups and downs.

The “ups” include a south Nampa home that they love and strong family connections; each of them has children from a previous marriage. Jim has five grandchildren and three great-grandchildren. Also, his twin sisters moved to Nampa within the past several years.

The “downs” have been quite serious, including diabetes and leukemia that the VA says he likely contracted because of exposure to “Agent Orange” in Vietnam. The unit where Jim would pick up and drop off many of those black boxes also was one of the main dispensaries for Agent Orange, which the U.S. military sprayed all over Vietnam to kill dense thickets of vegetation.

“They had barrels and barrels of Agent Orange there,” said Jim, whose leukemia is in remission. He also has back problems from constantly lifting the black boxes, which weighed up to 130 pounds each.

It’s these health barriers and others that finally are slowing Jim’s “fix it” mentality. For instance, he’s gradually become OK with paying a specialist to handle repairs and landscaping at his home.

Most would agree he’s earned the break.

The meaning of Veterans Day

Now and again Jim DuFrain meets someone who expresses overwhelming gratitude for his service during the Vietnam War. It doesn’t really make any difference to him.

“I didn’t do the things I did for recognition; I was there, and they needed to be done,” he said.

Jim keeps in touch with three or four pals whom he served with, but that’s about it. No veteran support groups. No weekly coffee clubs or roundtable discussions.

“I’ve always been able to take care of myself,” he said.