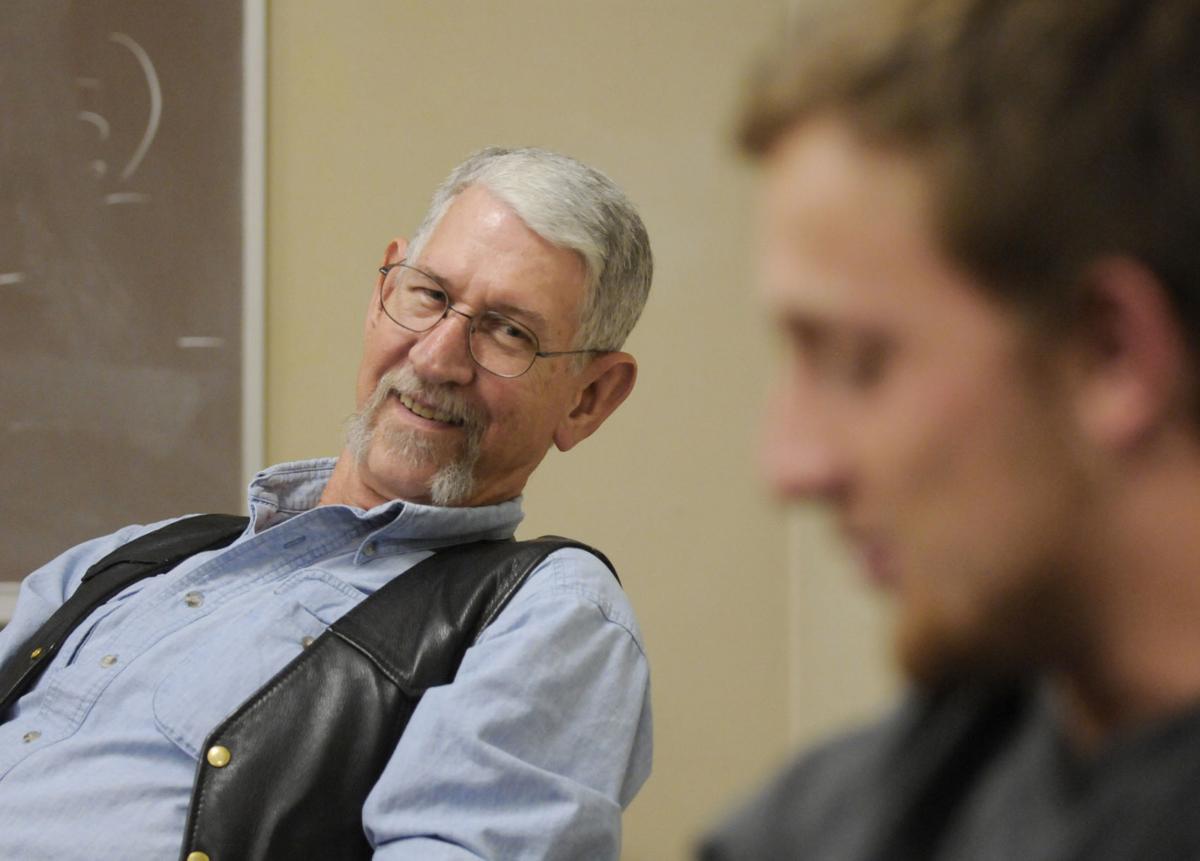 Chuck Yates, an adjunct professor at the College of Idaho, listens to a student speak during War and Humanity, a class Yates teaches three days a week. Yates is a veteran of the Vietnam War having served from November 1968 through March of 1970. 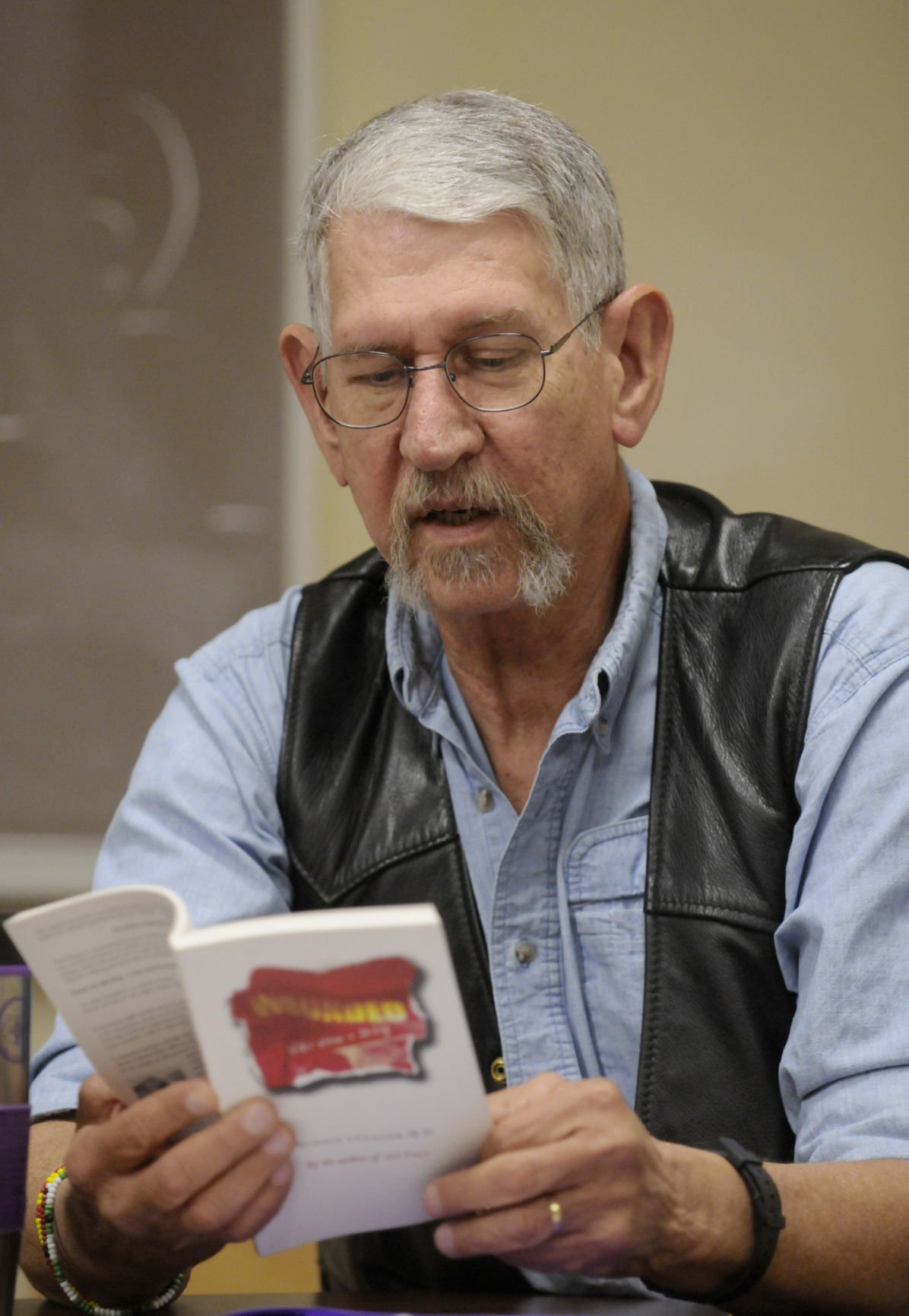 Chuck Yates, an adjunct professor at the College of Idaho, reads from the book “Wounded” by Ronald Glasser during War and Humanity, a class Yates teaches three days a week. Yates is a veteran of the Vietnam War, having served from November 1968 through March of 1970.

Chuck Yates, an adjunct professor at the College of Idaho, listens to a student speak during War and Humanity, a class Yates teaches three days a week. Yates is a veteran of the Vietnam War having served from November 1968 through March of 1970.

Chuck Yates, an adjunct professor at the College of Idaho, reads from the book “Wounded” by Ronald Glasser during War and Humanity, a class Yates teaches three days a week. Yates is a veteran of the Vietnam War, having served from November 1968 through March of 1970.

When people asked what he did “over there,” he was instructed to tell them he was conducting special communications tasks for the chief of operations.

What he really did was spy.

Flight after flight, day after day, he’d listen to equipment that would pick up the conversations of Vietnamese men hiding in the underbrush.

Men who ached to be anywhere but stuck in the middle of nowhere searching for the enemy.

Men who yearned to see the faces of their girlfriends, who yearned from letters to hear from their mothers and fathers.

Men who wanted to get back to Hanoi to drink with their friends again.

Now a professional historian, Yates spends his time attempting to get his college students to explore and understand the connection of war and humanity — the title of one of the courses he teaches as an adjunct professor at the College of Idaho.

As a Navy veteran in Vietnam, Yates served as a communications technician based at Da Nang. He was in the service from 1966 to 1970 and was in Vietnam from November 1968 to March 1970.

He said he knew he was going to be drafted, so he joined the U.S. Navy because “it wasn’t the Army.”

“But I also believed then, and I still do, that if you’re going to enjoy the benefits of a community, you have an obligation to serve the community for a little while,” he said.

Yates began boot camp in San Diego, where he turned 21, eventually taking on more training to learn the language of the North Vietnamese.

But it wasn’t long before Yates began to question the reasons behind the war itself and his involvement in it.

“One of the things you realize when you join the military is that you have a heart full of nobility and good intentions,” he said. “Then you realize you aren’t serving your country, you’re serving your government, which is not the same thing.”

Yates got to Vietnam in 1968, right after the Viet Cong launched the first phase of the largest battle to date of the war, the Tet Offensive.

His experience serving in Vietnam has lasted far longer than his time there.

He said he knew fairly early on that he was exhibiting symptoms of what we now commonly call post-traumatic stress disorder.

His ability to hold down a full-time job was affected, he said, and his relationships became harder to maintain.

“It’s still definitely there,” he said. “If a car backfires in the street, I’m still ducking for cover.”

Yates was never spat on when he got home.

He wasn’t celebrated, either.

He didn’t tell people he was a Nam vet; he didn’t want people to know.

“I didn’t want to deal with the issues that I brought back,” he said. “When people brought it up, I left the conversation.”

When people learned he served in Vietnam, Yates said some people would physically back away from him. Some didn’t — and still don’t — know whether to say thanks or avoid the subject entirely.

Everything changed for Yates when the 52 American diplomats and citizens were released in the Iran hostage crisis after being held for 444 days, ending Jan. 20, 1981.

When they came home, they were celebrated with a hero’s welcome, Yates said.

“What kind of a welcome did we get when we got home?” he said. “A whole lot of us Vietnam veterans suddenly got very political witnessing those hostages coming home from Tehran, which is not to say it wasn’t good for them to come home, but …”

In conversations with other Vietnam veterans, he said many people he knew — including himself —

went through an awakening.

That sense of complacency is something he’s trying to combat with his students. After retiring from Earlham College in Indiana after teaching there for 27 years, he settled into his home with his wife, Deb, in Caldwell.

His wife jokes he failed at retirement, and he picked up where he left off at C of I.

Yates doesn’t have any historical photos of his time in Vietnam.

What he does have is a dark baseball cap with the words “dysfunctional veteran — leave me alone.”

“If you want to thank me, hold the government accountable,” he said. “Ask questions. Challenge their claims when they say this and this is happening in this place. Say, ‘show me.’”

“It doesn’t really mean a whole lot to me … My dad landed on D-Day in Normandy and he used to say, ‘I didn’t go over there so I could have a parade … I went over there because I thought my way of life was in danger.’ I don’t feel the same way about Vietnam.”