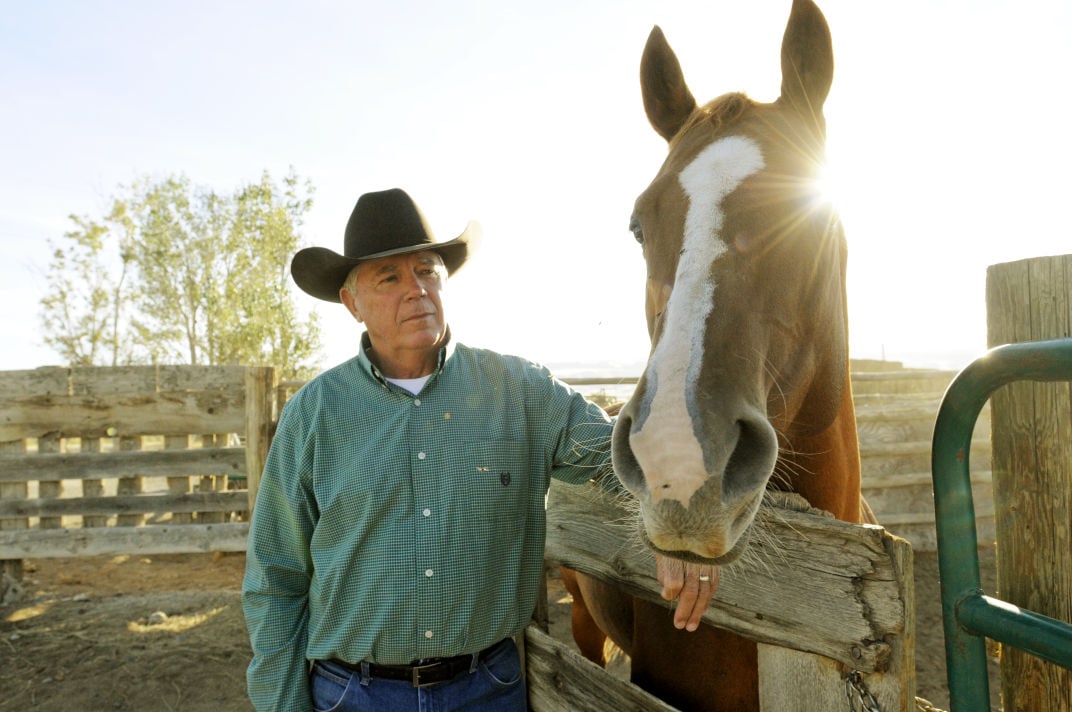 Vietnam veteran Brett Endicott and his horses on his land overlook the Owyhee Mountains in south Marsing. 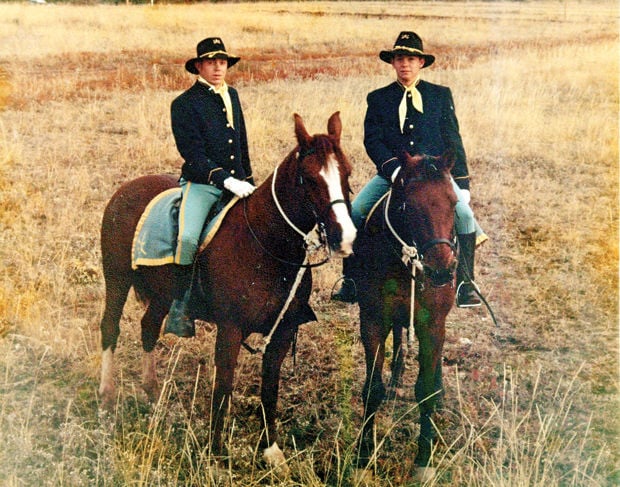 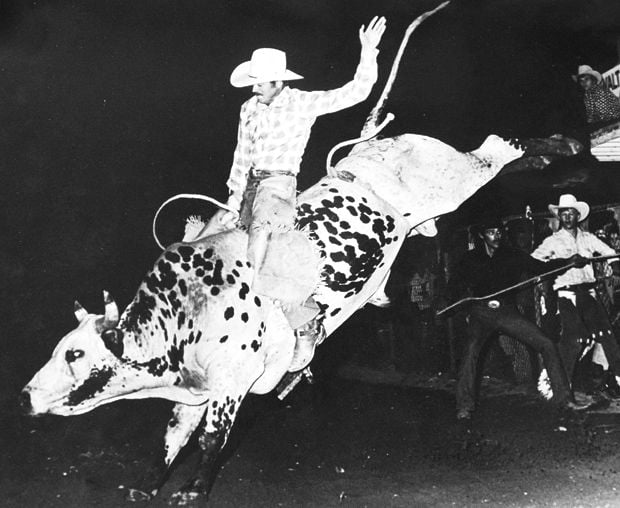 Vietnam veteran Brett Endicott and his horses on his land overlook the Owyhee Mountains in south Marsing.

If Brett Endicott’s life were a book, it might be called “The Quiet Life” or “The Cowboy Way.” There would be chapters on rodeos, family, the U.S. Cavalry and the Vietnam War.

But the latter would be an interesting anecdote, not the climax or even a main plot point.

Perhaps more than anything, for Endicott the war was a one-year interruption in a lifetime of quiet, rural living in southwestern Idaho. After a robust childhood of hard work and athletics in Middleton, and before forming a family and forging a career in the Snake River Valley, Endicott traveled overseas on Uncle Sam’s dime — learning how to fix equipment, run a switchboard, transport clean water and even hitchhike through unfriendly areas.

He was barely out of high school, having tried college and then construction work, when his mom called with the news that he’d been drafted into the Army in March 1968. It was three weeks before he would report to Fort Lewis in Seattle. No big deal, he said.

“It’s just something that you did,” said Endicott, who has been the Owyhee County assessor for the past 12 years.

Boot camp went smoothly for Endicott and others from Idaho, he said, as their rugged upbringing filled with sports and outdoor activities fostered excellent fitness. While at Middleton High School, Endicott participated in rodeo, football and basketball. He was a member of the state champion hoops squad that went 27-0.

When not studying or playing, the young Endicott was hard at work detassling corn, hoeing beets and picking strawberries.

“My memories of growing up were that I got to put up a lot of hay for zero dollars,” he said.

Many less-fit young men from urban areas like Seattle and Portland seemed to struggle at basic training, Endicott said. For example, when commanding officers made a rule that soldiers had to conquer a series of monkey bars before being served dinner, it proved problematic.

“Some of them, I doubt if they ever got to eat,” Endicott said with good-natured exaggeration.

He, on the other hand, thrived, receiving extensive training — most of which was related to maintenance of different sorts of equipment — and several promotions at multiple U.S. stateside locations before heading to Vietnam on April Fool’s Day, 1969.

He wasn’t scared, though. Call it a feeling.

“When I went over there, I knew I was coming back alive,” he said.

Endicott had never operated a switchboard, but he learned quickly. For his first three months in Vietnam, he worked at a battalion headquarters, staying just busy enough to stave off boredom.

For the remainder of his yearlong tour, he drove a water truck. Endicott was responsible for identifying the best sources of potable water, obtaining it and transporting it to his battalion.

Most of the available clean water in Vietnam was heavily doctored with chlorine, so one can imagine Endicott’s delight after finding a nearby Air Force base that used a high-quality filtering system. The water from that facility tasted like what the U.S. troops were accustomed to in the U.S.

Danger wasn’t a big part of Endicott’s experience in Vietnam, but it existed. For instance, those relatively long journeys in his water truck — alone, without a convoy — often left him uneasy.

The danger level in Endicott’s battalion was lessened by the presence of allies from the Korean military, he said. Whereas the U.S. Army stuck rigidly to its “do not fire unless first fired upon” standard, the Koreans operated under no such restrictions. Thus, they often served as the most viable protectors of U.S. servicemen.

The Koreans helped, and Endicott was unscathed. One year after he had arrived in Saigon, he left from the same tarmac — with the same indelible sense at the forefront of his consciousness.

That smell. It was something he never got used to — not with that crisp Idaho air beckoning.

Like many veterans returning home, Endicott was surprised by how quickly people’s lives had moved on without him. In a sense, he and other soldiers envisioned that life would pause while they were gone, then unpause when they came back.

“That was kind of an awakening,” he said.

Endicott flew from Vietnam to Fort Carson in Colorado Springs, where he met his future wife, Maggie. They were introduced on a blind date, hit it off and began writing letters to each other after Brett transitioned into civilian life in Idaho, then Oregon. The correspondence worked; they wed in November 1971 in southwest Idaho.

However, before settling down with a wife and eventually kids, he got a once-in-a-lifetime opportunity to satisfy a childhood dream.

“I always wanted to be a cowboy,” he said.

At Fort Carson, he met a fellow soldier who knew of a unique way to serve the remainder of his military tenure: in the only remaining horse cavalry in the U.S.

It was the perfect fit for Endicott, who grew up participating in rodeos and dreaming of ranch life. He could live off the base, wear civilian clothes and enjoy some of the most ballyhooed outdoor views in the country. The soldiers would don garb from the 1880s, staging reenactments and riding in parades.

HOMESTEAD ON THE RANGE

Regardless of the war, Endicott’s life unfurled much the way he always imagined it would. He built his family in the area where he grew up, having three children and soon-to-be four grandchildren.

Hard work, which was a big part of Endicott’s early years, remains a recurring theme. A handful of years after the war, he started his own business: an organic fertilizer distribution company. He ran it for 25 years.

More recently, as the local assessor, Endicott has found a way to serve his fellow Owyhee County residents in a practical way. The Assessor’s Office establishes an assessed value on all property located within the county.

On his own property outside Marsing, Endicott has the type of homestead he’s always wanted — a place that harkens back to his grandparents’ farmland from decades ago. Nestled near the base of the Owyhee Mountains — with a clear view of the Jump Creek Falls area — he and Maggie tend to three horses and the occasional cow, laugh with their grandkids and attend various rodeos. Brett has been a rodeo judge for 12 years. He has worked at 13 professional rodeos this year alone.

It’s the rural life. It’s a life defined by peace — and quiet.

Endicott appreciates that there’s a day set aside to honor veterans. He also greatly values the patriotism he experiences on a regular basis on the rodeo circuit.

At rodeos, “The Star-Spangled Banner” is always a big deal, Endicott said. Also, event organizers usually ask veterans to stand so the crowd can express their appreciation.

Often, people who’ve never served question whether they’re capable of conquering the fear and pressure associated with war. Endicott said the human mind is underestimated in that regard — that it allows a person to function even in the face of grave danger.

“In those situations, you’d be surprised what you’re capable of doing to survive,” he said.