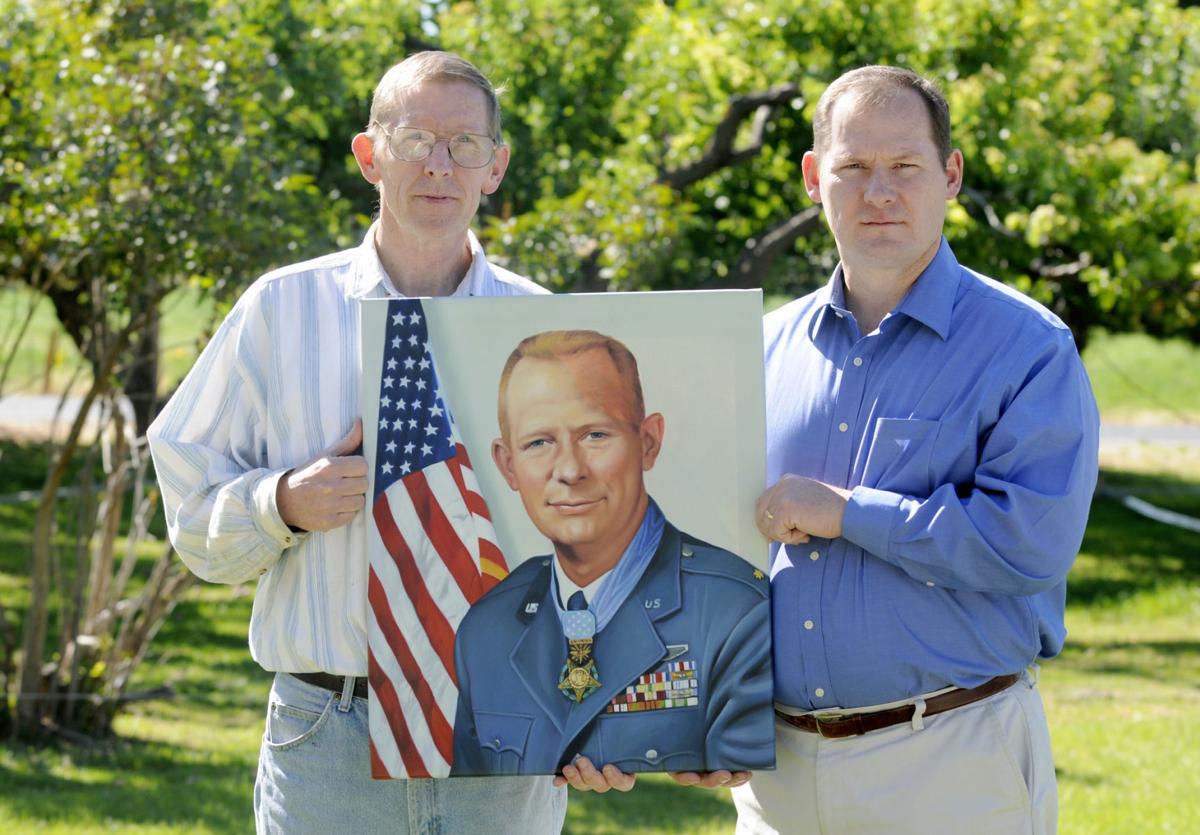 Brad and Steve Fisher, of Kuna, holds a painting of their father Bernard Fisher, a Medal of Honor recipient. On March 10, 1966, Bernard Fisher landed his plane on an airstrip in the middle of a fire fight to rescue a downed pilot during the Vietnam War. 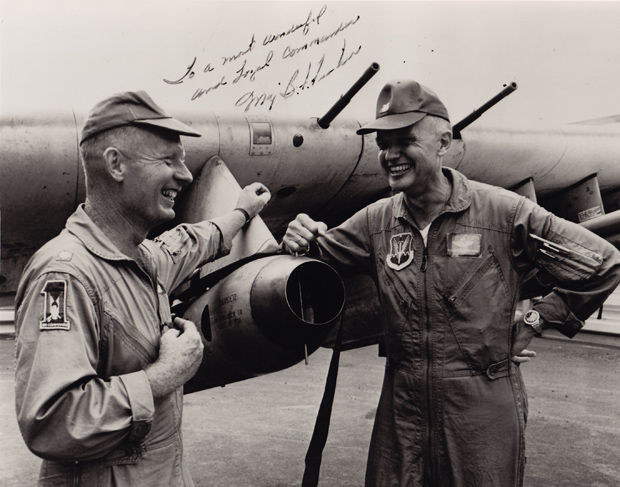 Bernie Fisher chats with a fellow serviceman. The handwritten note says: “To a most wonderful and loyal commander.” 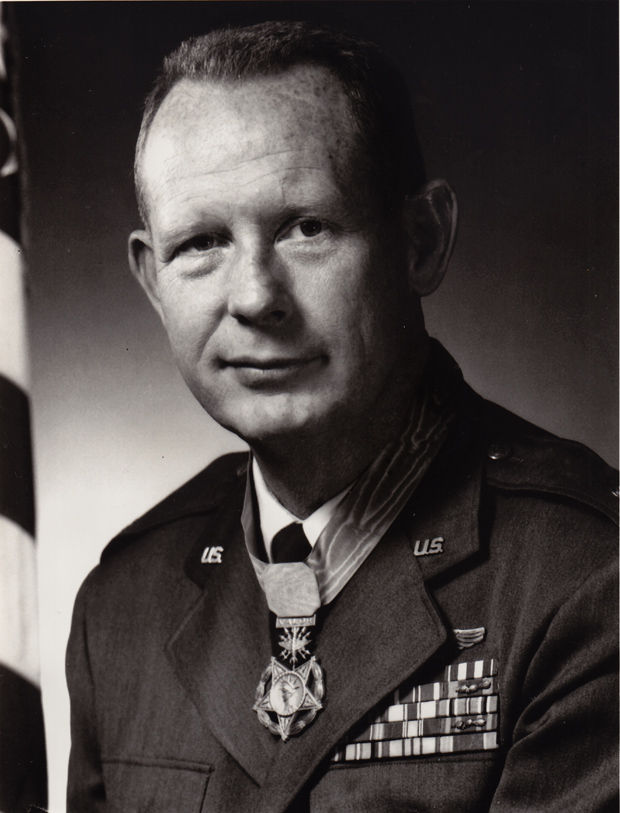 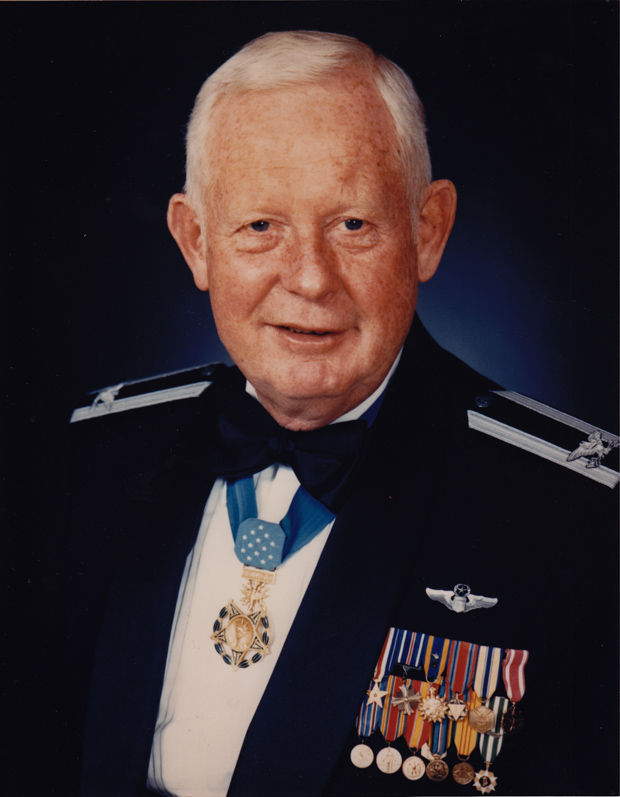 Brad and Steve Fisher, of Kuna, holds a painting of their father Bernard Fisher, a Medal of Honor recipient. On March 10, 1966, Bernard Fisher landed his plane on an airstrip in the middle of a fire fight to rescue a downed pilot during the Vietnam War.

Bernie Fisher chats with a fellow serviceman. The handwritten note says: “To a most wonderful and loyal commander.”

I’m gonna make about 180 degrees, and come in to the southwest, Maj. Bernard Fisher told his fellow airmen as he prepared to make a daring rescue along a battle-torn airstrip.

Another American aircraft crash landed on the runway just moments before. Its pilot, Maj. Dafford “Jump” Myers, was potentially injured and at imminent risk of capture.

“OK,” came the reply from Capt. John Lucas, according to military transcripts. “Well, then, we’ll come up behind you and strafe parallel to your heading with you.”

Enemy forces had cut off a nearby special forces camp from the airstrip. Hostile troops in the surrounding hills never eased off the constant pressure of automatic weapons fire. Fisher and his men were there to provide air support to the battle below.

“OK, I’m rolling in now.” Fisher was making a risky maneuver with his A-1 Skyraider — landing on an airstrip under heavy enemy small-arms fire — but he knew his buddies had his back, even as they placed themselves at risk.

“I’m right behind you, Bernie,” Lucas said over the radio. “I took a hit to my pitot system, and I’m smoking a little.”

Even as Lucas covered Fisher, two more pilots — Capt. Dennis Hague and Capt. Francisco “Paco” Vasquez — kept an eye on Lucas. This was a well-oiled machine, a team of men who looked out for each other.

“I’m right back at your six o’clock, Luke,” Hague said.

The Skyraider pilots operated under an 800-foot ceiling, limiting their maneuverability between mountains and exposing them to enemy small arms fire. Circling 20,000 feet above of feet above, fighter aircraft were poised to strike, but Myers was still in danger.

“All right, sir, hold on high and dry,” Forward Air Control told the fighter pilots. “At the present time we have A-1H’s working underneath. There’s an aircraft down there at the present time, and we’re trying to get the pilot out.”

Minutes later, Fisher landed and taxied the full length of the runway, allowing Myers to scramble into Fisher’s Skyraider before they made their escape. The whole rescue was so smooth and so fast that it even surprised their fellow airmen.

“Luke, you got a chopper coming in up here from the north,” Skyraider pilot Jim Gunter said. “Uh, he might be able to get your pilot out.”

“We already got him out,” Lucas said.

Fisher, who lived the rest of his life in the Treasure Valley before he died earlier this year, received the Congressional Medal of Honor — the nation’s highest military honor — in 1966 for his role in Myer’s rescue.

But his son, fellow pilot and Kuna resident Steve Fisher — said he never really saw himself as a hero. To hear Bernard tell it, Steve recalled, he only did what anyone would have done in his position.

But to his family, Steve said, it was just one heroic event in a career full of heroic events.

“He got a lot of recognition for this,” Steve said. “But there were other things he did.”

Another of Bernard’s sons, Brad Fisher, tells a story of when his father piloted an F-104 Starfighter — an aircraft with notoriously stubby wings and a tendency for engine flameouts — in southern Florida.

The Starfighter was built to go fast. It didn’t glide well. In the event of an engine failure, Brad said, pilots were instructed to bail out.

But that’s not what Bernard did when his F-104 stalled in mid-flight — he managed to bring it safely to the ground.

Not only was it an impressive feat of piloting, Steve said, it also saved lives. When an aircraft is abandoned over the ocean, there’s no way of ever knowing what went wrong. But, thanks to Bernard, aircraft mechanics finally had an opportunity figure out why the Starfighter was prone to flameouts.

“He did it twice, too,” Brad recalled. “Two times, he did it. He’s one of the few people that ever did that on that plane. He happened to be just above the airbase when that happened, so he didn’t have to glide for a while.”

After he left the military, Steve said, Bernard built his own farm and homestead and stayed involved with the community. He was active in The Church of Jesus Christ of Latter-day Saints, Boy Scouts and other organizations until his death in the summer of 2014.

But he never gave up flying. The Fisher brothers recall leaving the Nampa airport for morning fishing trips in Idaho’s back country and simulated bombing runs over Boy Scout camps.

“I remember when I was a kid, I was that bombardier,” Steve said. “He had a plane, and we would go up to a Boy Scout camp. We’d fill nylon stockings with candy and tie some kind of streamer on it, fly over the camp, and drop it on the camp.”