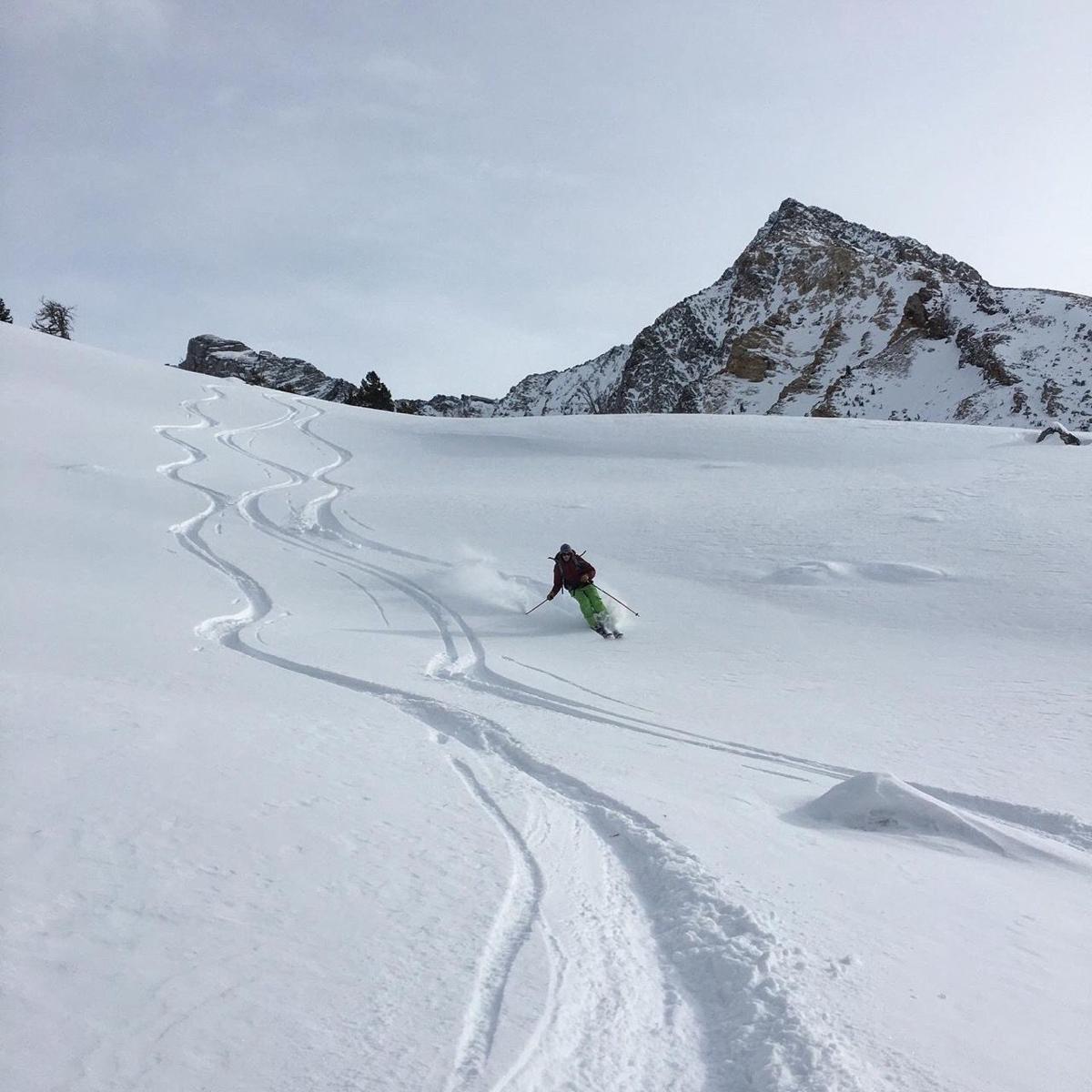 Carving the snow at Hyndman Peak. 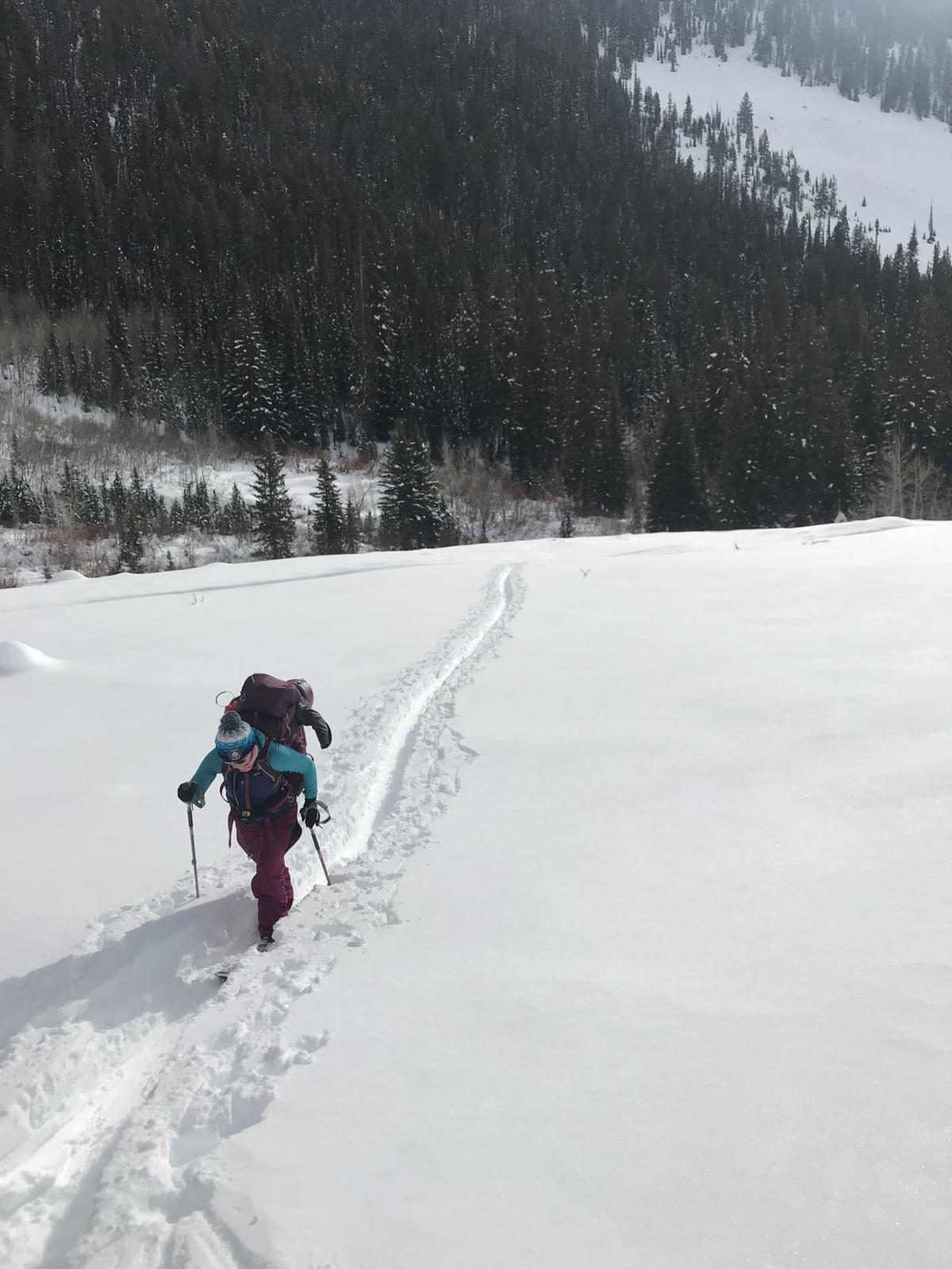 Skiing in the entire six miles to the yurt took five hours. 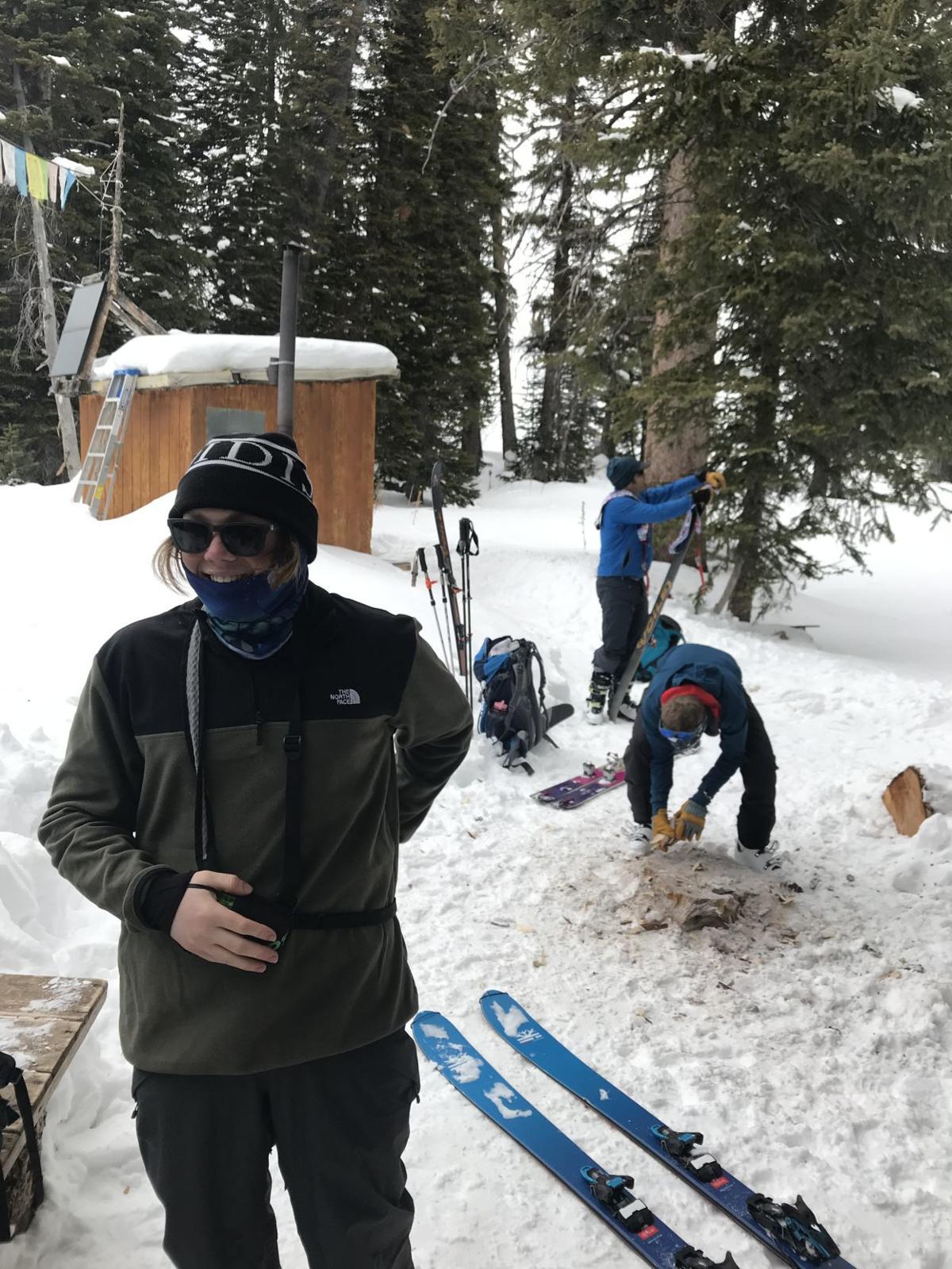 At the yurt with the wood-fired sauna in the background. 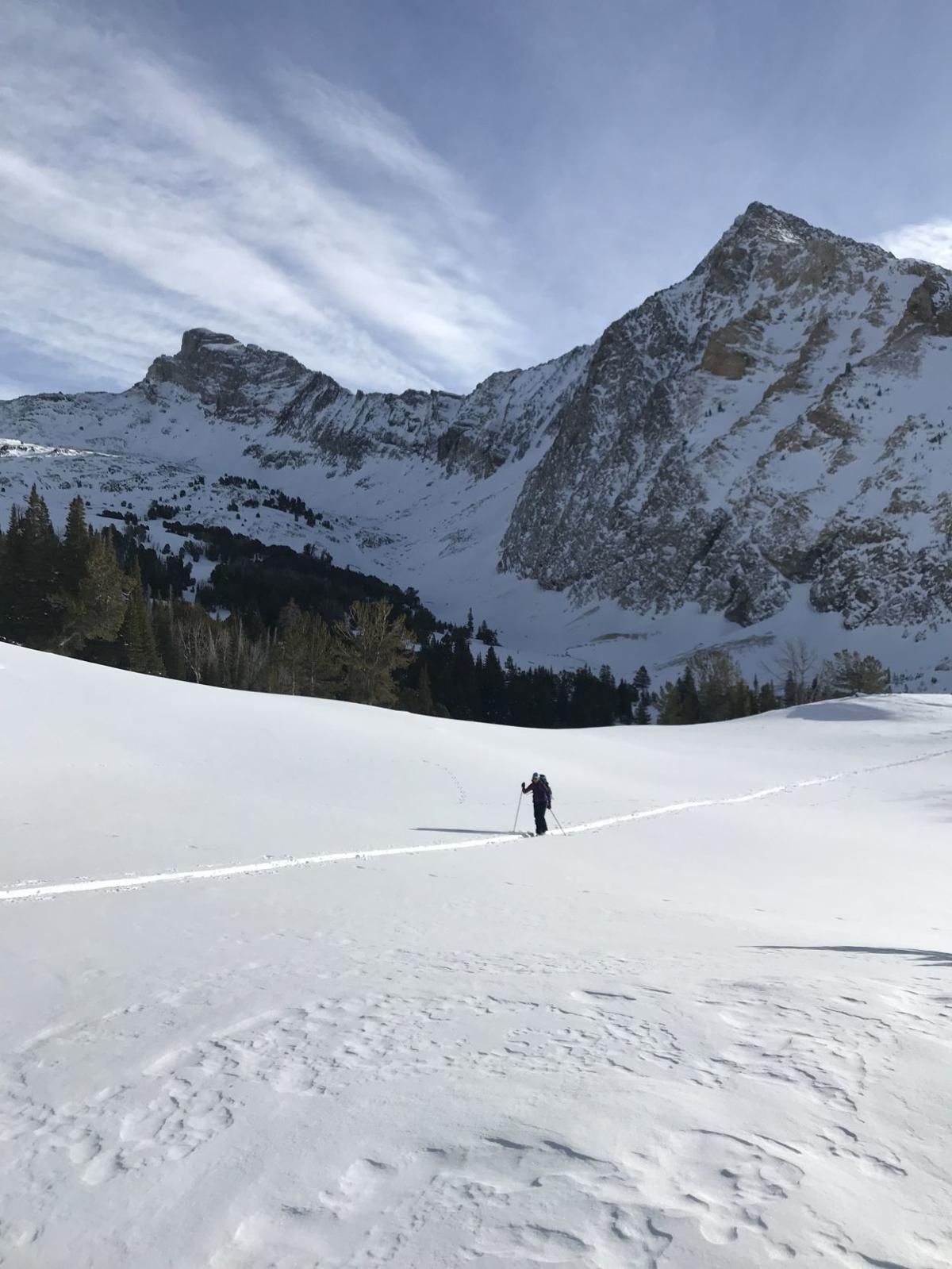 Trekking in the snow at Hyndman Peak. 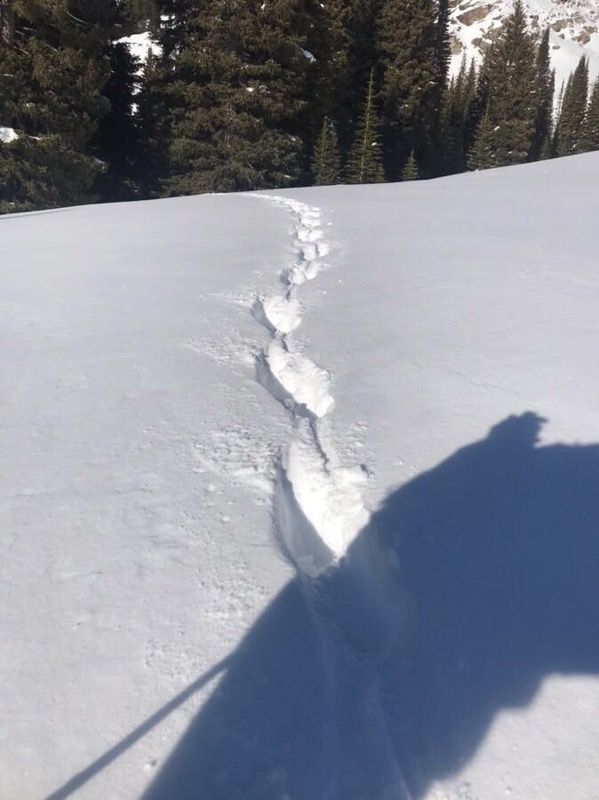 While exploring a slope northeast of the yurt, we spotted tracks in the snow that led straight up the steep incline. Five of us were lucky enough to make out and recognize a wolverine directly in front of us.

Carving the snow at Hyndman Peak.

Skiing in the entire six miles to the yurt took five hours.

At the yurt with the wood-fired sauna in the background.

Trekking in the snow at Hyndman Peak.

While exploring a slope northeast of the yurt, we spotted tracks in the snow that led straight up the steep incline. Five of us were lucky enough to make out and recognize a wolverine directly in front of us.

In genuine weekend-warrior fashion, seven friends and workmates recently spent a long weekend skiing to the Pioneer Yurt, near Ketchum. Most of us had never been to the yurt before nor explored the area that leads to Hyndman Peak.

In the dark before sunrise, four of us loaded the truck with skis, gear and a full thermos of coffee. Knowing we had a long day ahead of us, we kept our packs light and left “extras,” like beer, at home.

A few hours later after the sun had come up, we met Josh Johnson, a Ketchum local, at the East Fork park and ski off Highway 75 and drove to the Hyndman Creek winter trailhead together. Josh not only broke trail for much of the weekend, he also spends a good deal of time exploring the Pioneers so became our de facto guide.

We met Kerrie Weppner and Justin Nielsen, the last two in our party, at the trailhead which starts between Hailey and Ketchum, down East Fork road and past the old mining town of Triumph. The Triumph Mine closed down decades ago and the EPA proposed listing it as a Superfund site in the early 1990s. Community opposition, though, resulted in an agreement between the EPA and the State of Idaho, with the contaminated mine site becoming the state’s responsibility. This is also where cell phone coverage ended for the weekend so any emergency would require a satellite phone or messenger device.

The Pioneer Yurt is managed by Sun Valley Trekking. The yurt is tucked in at the edge of a sub-alpine meadow at 8,700 feet and about six miles from the trailhead. Although SV Trekking does offer a snowmobile tow and/or a porter for the first five miles (until it gets too steep for snowmobiling and remains closed for winter months) and requires a guide if no one in the group has been to the yurt before, we chose to spend the day skiing in the entire six miles.

It ended up being a long and steep ski in, but with frequent breaks for water and snacks, and making sure proactive measures were taken to prevent heel blisters, it was doable.

We gained elevation gradually over the first few miles, weaving through beautiful aspen groves along Hyndman Creek. We then traversed through Hyndman Basin with three massive peaks (12,000+-foot Hyndman, and 11,000+-foot Old Hyndman and Cobb) towering above us before we started climbing steeply. It took most of us five hours of skinning to finally arrive at the yurt. When we did, we were ready to kick off our boots and fire up the woodstove.

The yurt has sleeping space for 16 people, although seven felt like the perfect fit. A full kitchen with a three-burner stove, sleeping pads and a solar charger made everything super cozy.

Under perfect conditions, skiing around the yurt offers plenty of low angle glades and steep mountaineering routes, but that weekend brought some windswept slopes and moderate avalanche conditions so we played it safe and found plenty of mellow places to play. Liam Weber, the youngest of our group at 16, spent the day building a jump in the deep snow.

While exploring a slope northeast of the yurt, we spotted tracks in the snow that led straight up the steep incline. Five of us were lucky enough to make out and recognize a wolverine directly in front of us. The incredibly rare sight — fewer than 300 wild wolverines are left in the lower 48 and are threatened by habitat loss and climate change — was worth the trip on its own.

After a full day of skiing and marveling at the wolverine, we sipped the last of the bourbon and watched the alpenglow while soaking in the last of the exceptional Sun Valley sunshine. Warming up in the wood-fired sauna ended the day.

When it was time to leave the yurt, we coined the term “yurtiquette” — properly replacing the wood pile, tidying up the kitchen and making sure all garbage was hauled out — so the place was ready for the next guest to enjoy. We closed up the yurt and set off on our return.

The ski out took far less time than the ski in — about two hours. A steady downhill along the ski track and a lighter pack made the ride to our cars not so bad. As we drove back home, we all felt lucky to have experienced staying and skiing at the yurt and seeing a wolverine. Getting there was hard work, especially if you opt out of a snowmobile tow or porter, but the beautiful and pristine setting makes the yurt the perfect place to spend a quiet winter weekend skiing and playing in the snow.

Lana Weber is a Boise native. She grew up at the base of the foothills “with dirt between her toes and a sprig of rabbitbrush in her pigtails.” An avid trail user, river runner and lover of the wild Idaho desert, she leads monthly trail hikes for the community. She currently works as community engagement coordinator at Idaho Conservation League. Send comments or questions to: lweber@idahoconservation.org.

About the Pioneer Yurt

The Pioneer Yurt is managed by Sun Valley Trekking, a company with a long history in the Wood River Valley. SV Trekking was aptly named and rebranded in the early 1980s by Bob Jonas, who explored the Sawtooths and built other structures meant for backcountry skiing. Now owned and managed by Joe and Francie St. Onge, they’ve continued the tradition of backcountry exploration, rebuilt many of the huts, and have created a world class ski guiding program. For more information visit www.svtrek.com.