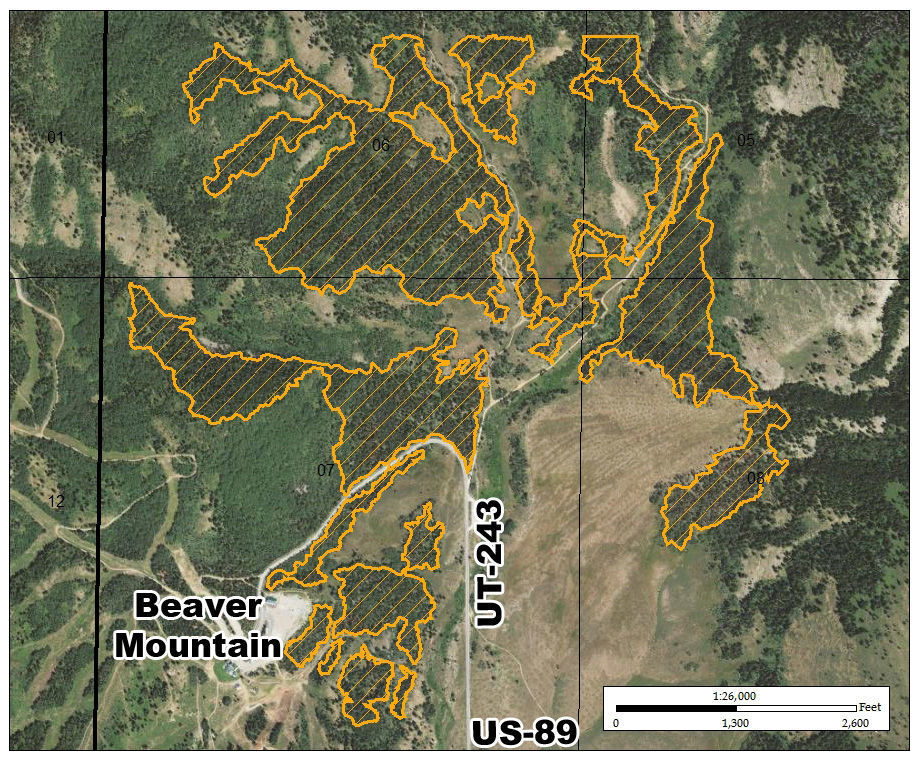 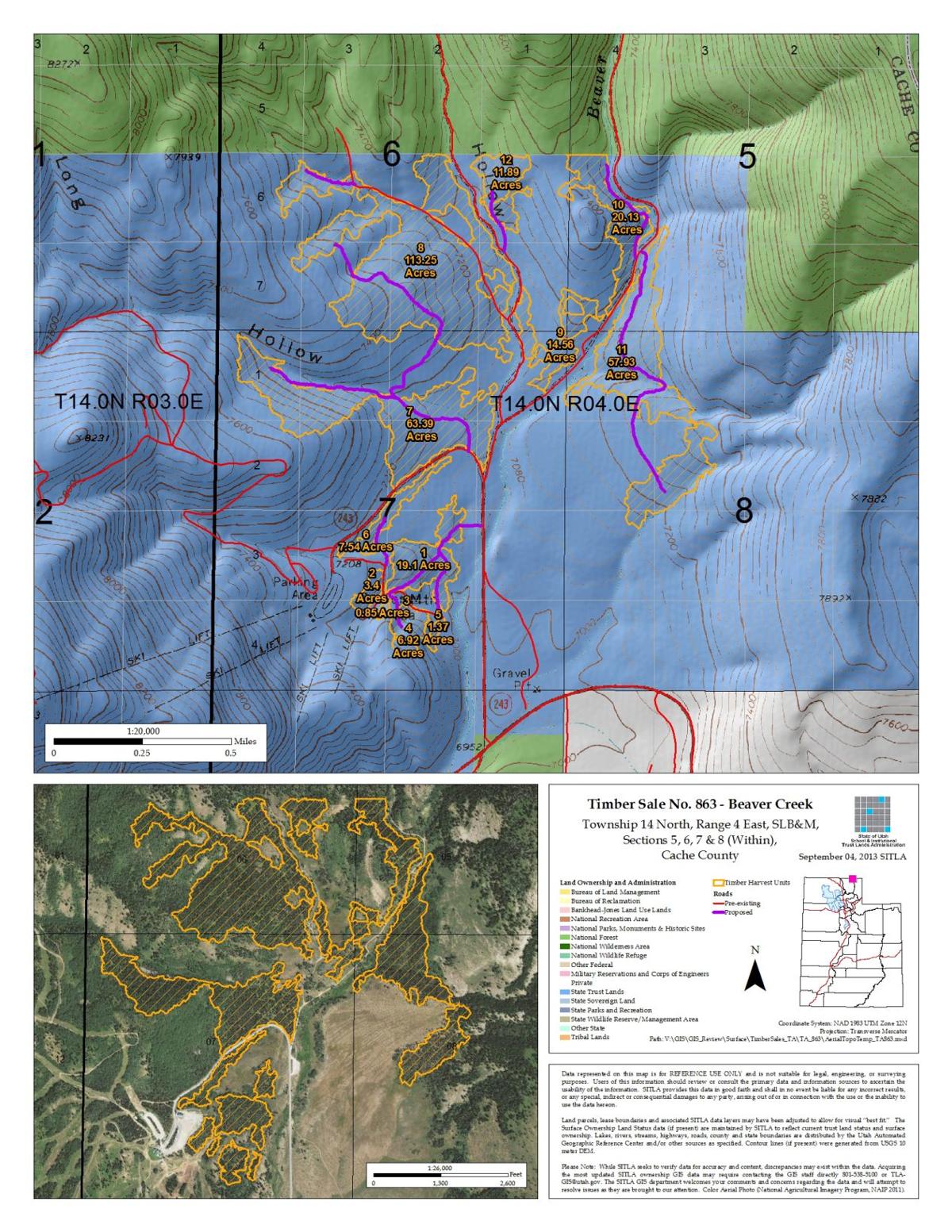 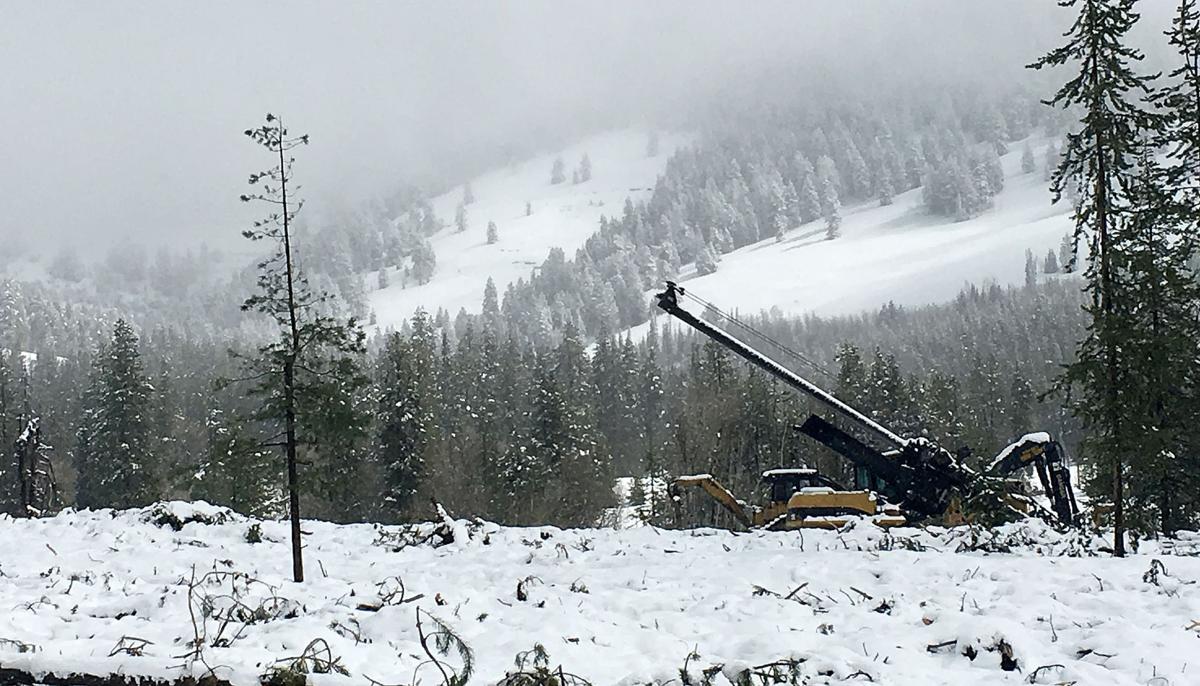 Trees near Beaver Creek have been cut as part of a timber harvest.

Trees near Beaver Creek have been cut as part of a timber harvest.

The conclusion of the ski season at Beaver Mountain has left some wondering what the landscape surrounding the 828-acre resort will look like next season.

With a State of Utah School and Institutional Trust Lands Administration contract, Kamas-based Thompson Logging Inc. has begun a projected 36-month operation to harvest 320 acres of timber adjacent Beaver on the east and north east.

Terry Thompson, president of Thompson Logging, said the operation is primarily aimed at reducing fire potential and clearing areas that have been impacted by the mountain pine beetle.

"We are contracted for 320 acres," Thompson said. "Mostly it is lodgepole and sub-alpine and a little bit of spruce that we will pull out of there."

Thompson said the lumber will be hauled to their mill in Randolph and used for construction applications as well as "playground chip" material that will end up in Cache Valley and the surrounding area.

With a contract that runs through September 2019, Thompson wasn't sure if logging would run through the winter months, saying: "We will work it until winter for the next the couple of years."

The potential impact to recreation at Beaver has Mountain Operations Manager Travis Seeholzer hesitant about the upcoming summer season and future ski seasons.

"One of our big concerns is for the upcoming season. There is a lot of traffic on that road. Adding log trucks with skier traffic might make things difficult," Seeholzer said. "Thompson told us they don't usually log on the weekends, so there shouldn't be too much impact when we are busy, but we just don't know if they will log through the winter."

Seeholzer said he has been asked by numerous people about the logging operation that started along State Route 243 — the road connecting U.S. Highway 89 with the ski area — which seemed to clearcut much of the Beaver Creek Trailhead area.

"We've been assured that it's going to be less of a clearcut than it looks currently by the Beaver Creek Trail," Seeholzer said.

After the first cuts were made near the Beaver Creek Trailhead late last month, Seeholzer said the rumor mill began to churn "with all sorts of conspiracies."

"There is no conspiracy behind it. We aren't building condos, and despite what people say, that isn't where a gondola is going," Seeholzer said. "People have joked, but it has nothing to do with development — that we know of at this time. It is also nothing Beaver is involved with."

Numerous calls to a representative from SITLA were not returned by press time Monday.

According to a flyer sent out by the state administration, the goal of the project is to "reduce wildfire potential, protect resort facilities and improve long-term forest health."

With rumblings of a timber sale happening in the area circulating for years, Seeholzer said he first learned of the logging operation as the Peterson Hollow fire scorched 1,000 acres near Beaver.

"This had been talked about for years and years. I didn't think anything would ever come of it," Seeholzer said. "During the fire last year, I was told about it, and it was an eye-opener seeing the plans."

Although skiable terrain won't be affected by the logging, a newly completed mountain bike trail that runs through part of the operation will likely be impacted, Seeholzer said.

Seeholzer said Thompson Logging has agreed to leave a "buffer zone" around the trail so it can be utilized for a series of scheduled mountain bike races this summer and fall, but until logging begins, they won't know the full extent.

"The mountain bike trail was just completed last year," Seeholzer said. "They said they would create a 15-foot corridor for the trail in order to keep it intact where there is some excellent wooded area. There isn't a huge percentage of the trail that goes through the logging, but we hate to lose it."

Seeholzer said he does see a need for some of the harvesting.

"It is hard to see those trees hit the ground, but we know many need to be removed," Seeholzer said. "Aesthetically, it isn't awesome, but we are a little selfish about our views here at Beaver."

Trust lands throughout the state were designated at the time of Utah's statehood by Congress to be used specifically as a revenue avenue for specific state institutions.

The State of Utah School and Institutional Trust Lands Administration (SITLA) is the trustee to 3.4 million acres of Utah land that is specifically used to support 12 state institutions and primarily the state K-12 public education system.

Ninety-six percent of the trust lands in Utah benefit the public school systems.

According to the SITLA website, in addition to the 3.4 million acres, the trust manages 1.1 million acres of mineral estate for beneficiaries.