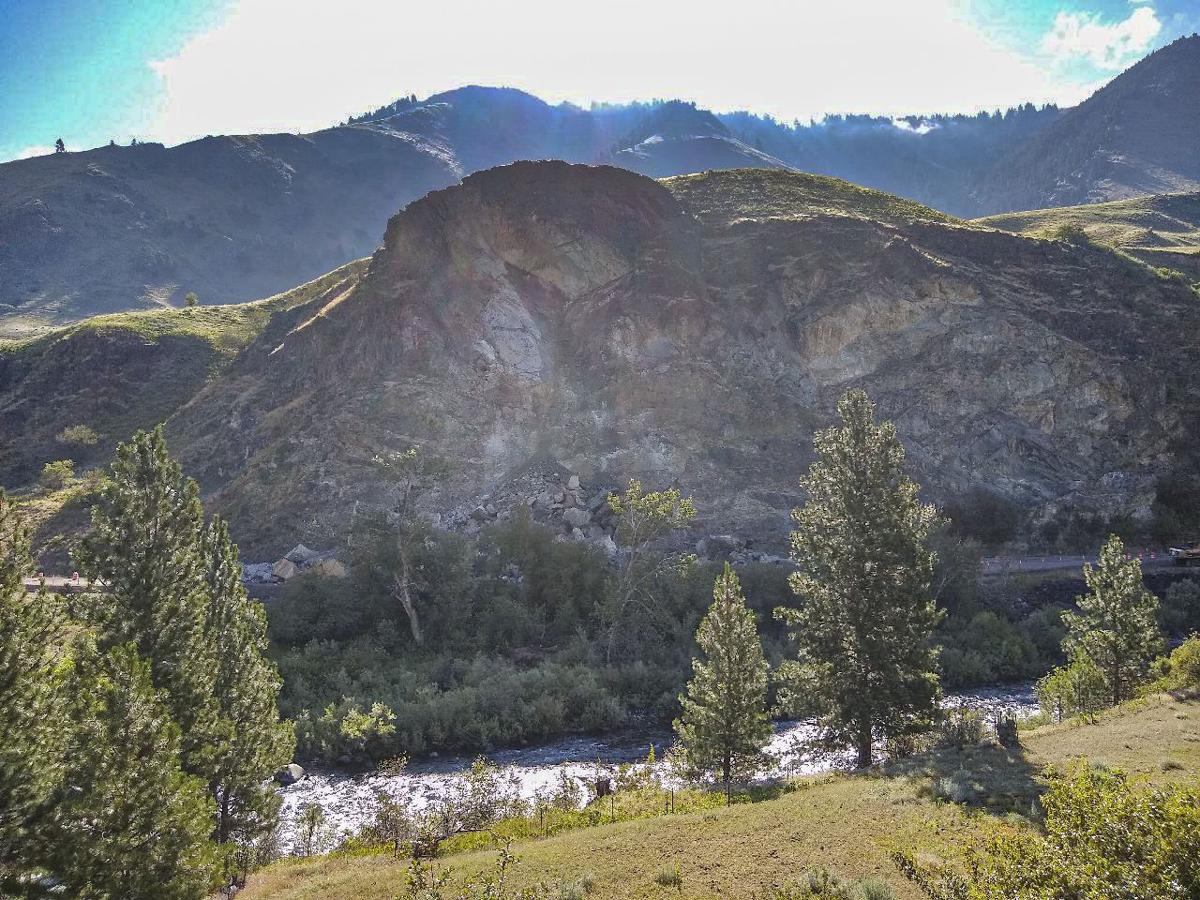 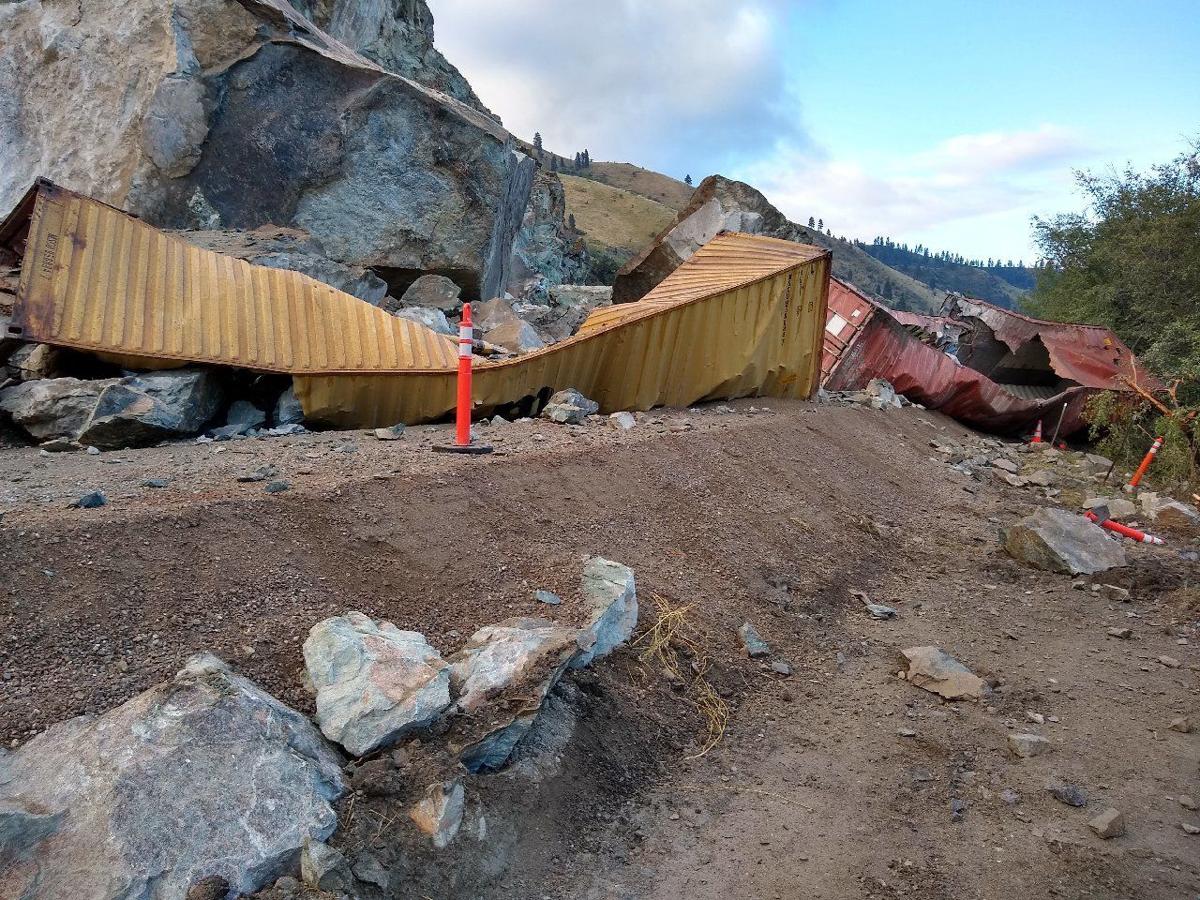 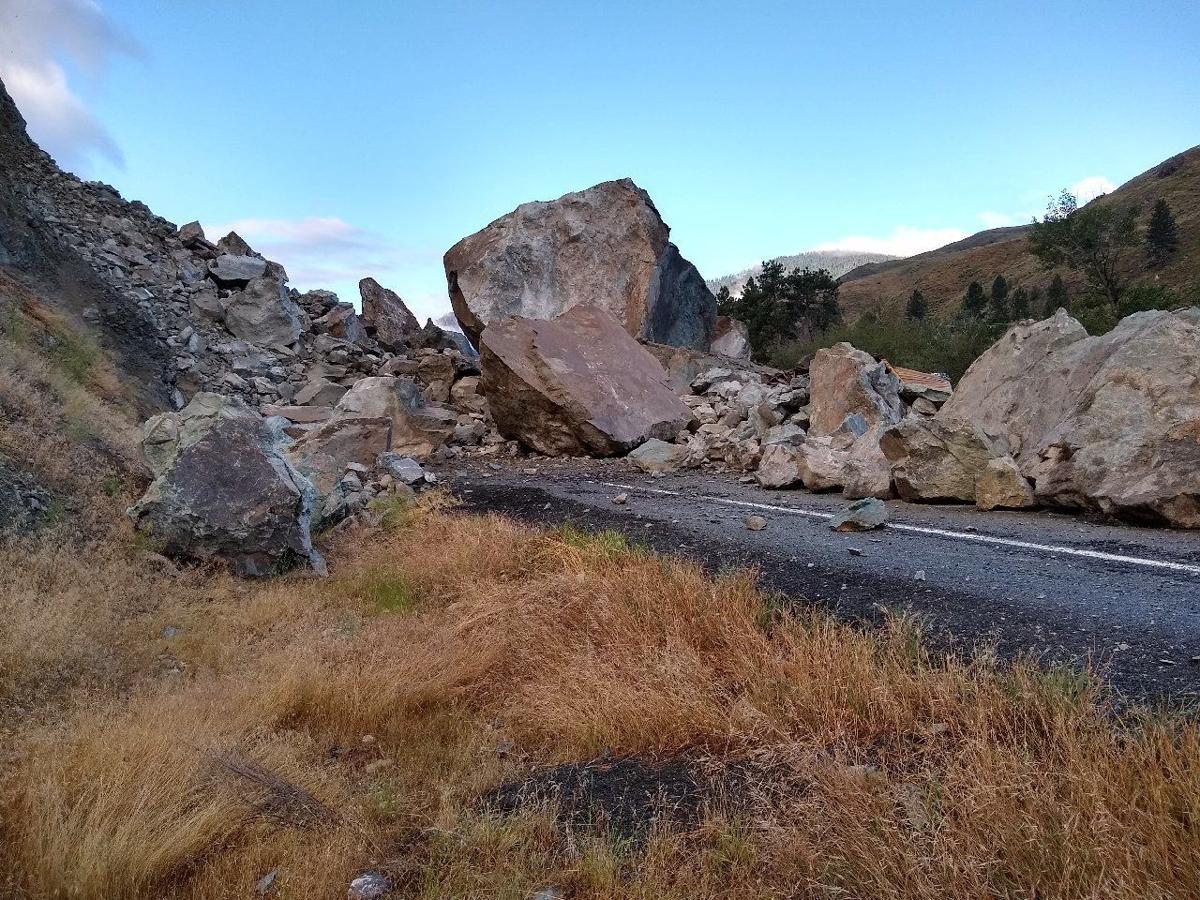 Originally ran July 12, 2020, at lmtribune.com. LEWISTON — For decades, the narrow corridor of U.S. Highway 95 between New Meadows and Grangeville has been a conundrum for travelers between northern and southern Idaho.

As the state’s only north-south arterial, the highway snakes through the steep, rocky canyon of the Little Salmon and main Salmon rivers, which has the tendency, every now and then, to slide like marbles from a bucket, particularly when the waterlogged soils of late winter and early spring loosen the cliff face.

Once that happens, there are few — if any — alternative routes, other than turning around and circumventing the state altogether through Washington and Oregon. Although there are a couple of local bypasses, they’re frequently unreliable because of poor road conditions or being blocked by snow. Only locals with four-wheel-drives and a lot of fortitude are intrepid enough to try them.

At about 9 a.m. on July 3, the area around milepost 188 gave way in a spectacular collapse, triggering truck-size boulders to rumble down the hillside and spewing debris 40 feet deep and 125 feet wide. Idaho Transportation Department crews were on scene almost immediately, working to detour traffic and clear the road, and by mid-week managed to make a temporary bypass around the slide area, allowing one lane of traffic to pass intermittently. By Thursday, however, the road was closed again after geotechnical analysis showed the rock was still shifting, and more boulders fell that night, extending the closure indefinitely.

District 2 engineer Doral Hoff said although the rockslide was unexpected, the transportation department was in the process of hiring a consultant to begin surveys of the site when it collapsed.

“We do monitor areas where we get frequent rockfall,” Hoff said. “We have worked on this thing in (years past). It’s been a few years, and we haven’t had a lot of activity, but we thought we needed to go in there and start looking at it again. And then here it comes. You can’t predict it at all.”

“When you build a road at the bottom of a canyon,” Hoff said, “things roll to the bottom.”

A history of instability

According to highway history from the U.S. Department of Transportation Federal Highway Administration, U.S. Highway 95 was first proposed as a route in October 1925, to be located entirely in Idaho. The routing encompassed the state’s north and south highway that was completed in 1926 and extended from the U.S.-Canadian border south to Weiser, a distance of 483 miles.

In 1937, the road was extended to the Nevada border, and three years later reached the California line, a distance of 1,557 miles.

The need for, and precariousness of, the route were clear from the beginning:

“If ever a state or community had occasion to stress the importance of a highway from a social and economic standpoint, Idaho has. Until a comparatively short time ago, this northwestern commonwealth was laterally divided. The northern and southern portions of the state were as widely separated as if an ocean divided them.

“The topography of Idaho is very peculiar. In the southern portion of the state is a broad, fertile valley. The northern part, in fact, approximately fourth-fifths of the state, is composed of rugged hills and mountains. Along the western boundary from the Canadian line to Ada runs virtually a continuous mountain range.

“No railroad has ever attempted to penetrate this rugged territory and until recently, no highway has been available to provide communication. As a result persons wishing to travel from any part of the north to the south, or to the capital, located in the southern part of the state, were required to travel through Oregon and Washington.”

A description of north central Idaho called it “a mountain massif broken only by valleys carved by rivers and streams and by two prairies: the big Camas Prairie around Grangeville and the Palouse country around Moscow. … Idaho’s lowest point is 710 feet near Lewiston where the Snake River leaves the Idaho border and enters Washington.”

Although through the years Idaho improved the highway’s original design and alignment, no credible alternative has been proposed to greatly alter the segment between New Meadows and Grangeville, the stretch most commonly affected by landslides.

The Lewiston Tribune chronicled a number of rockslides and mudslides in that corridor over the past several decades.

“Highway department officials, law enforcement personnel and residents of the Salmon River canyon all were watching carefully Monday a huge rockslide that continued to ease its way toward the Little Salmon River.

“Meanwhile the Idaho State Highway Department reopened traffic on U.S. Highway 95 through the canyon which had been blocked by a mudslide that tore out a half mile of the road Dec. 17. The slide, which occurred about eight miles south of Riggins, was caused in part by an underground spring. Rocks continued to rumble down the mountainside Sunday night … and by Monday night the obstruction had shifted into a pile 300 feet long and from 75 to 100 feet deep over the road.”

In March, 1984, Idaho Transportation Department engineer Jim Clayton described “rocks, some as big as bushel baskets,” that had fallen at the White Bird summit, blocking the road and forcing the department to make hasty repairs to the old White Bird summit that had not been used since 1965.

March 9, 1996 — The White Bird Hill on U.S. Highway 95 was closed for about 14 hours after a rain-weakened rock face crumbled into the roadway. Officials estimated the rockslide was about 50 feet across and 4 feet deep.

Nov. 29, 1996 — Both lanes of U.S. Highway 95 near Lucile, between White Bird and Riggins, were opened to traffic at about 4 p.m. Thursday. For the previous 24 hours, the road was limited to one-way traffic as crews from the Idaho Department of Transportation worked to clear the remainder of a rockslide that covered about 200 feet of U.S. 95, 13 miles south of White Bird. As much as 15 feet of rocks and dirt covered sections of the road after the slide.

Dec. 28, 2012 — Road crews will be removing the last of a huge boulder next week that was blown to bits after perching precariously above U.S. Highway 95 south of Riggins following a rockslide earlier this month. … The road crew blew up a huge boulder, estimated at about 1,000 cubic yards, Sunday at about milepost 188 on the highway south of Riggins. The boulder was part of a larger rockslide that spread across the road Dec. 2, closing both lanes of traffic for a few hours. Several of the rocks were “vehicle-sized.”

In November 1991, state officials said “Idaho needs to come up with new ways to make the state’s major north-south highway, U.S. Highway 95, better and a more reliable route,” after a landslide near Lucile closed the road during Thanksgiving Day travel, and motorists were stranded for 36 hours.

“As far as the importance of having that road open,” said Rep. Hilde Kellogg, R-Post Falls, “it is extremely important.”

Chuck Winder, chairman of the Transportation Board, requested a needs study on the highway, which showed it would have taken $330 million to improve the highway from the Canadian border to Oregon.

Though the options for a permanent fix to the river canyon highway are limited, it’s not impossible.

Hoff said the material along the Salmon River canyon is granite rock mixed with other metals and minerals — called “granitic schist” — that is more susceptible to weathering and breaking down than harder granite or basalt.

“So we got a lot of rain and we get water in those cracks in the granitic rock … and that’s probably what caused this (the landslide at milepost 188) to release,” Hoff said. “Minerals within the granite rock faces are more easily eroded, and the water from this spring likely eroded those places.”

Geotechnical experts are continuing to look at the hillside and are expected to make recommendations for future management.

That could involve removing rocks and other materials from the southern slope by blasting, rock hammering or other methods.

“That’s a little ways out yet but that’s the path I’m looking to go towards so we don’t have to deal with this thing anymore,” Hoff said.

The cost of that project is so far unknown. But Hoff estimated that the fix for the immediate problem will probably be between $80,000 and $120,000.

Included in the department’s activities is an upgrade to the Old Pollock Road across the river from the landslide. Although it is an Idaho County road and has been in disrepair for more than a year, the county does not have the money to repair it. Hoff said the state is stepping in, mainly to help out local commuters who need to get around the rockslide for work and other business.

“We are investigating, not only the short-term mitigations here to keep the road open, but also actively pursuing a long-term repair for this thing. We’re immediately working on strategies for long-term repair,” Hoff said.

Amazon fulfillment center on track to open this year