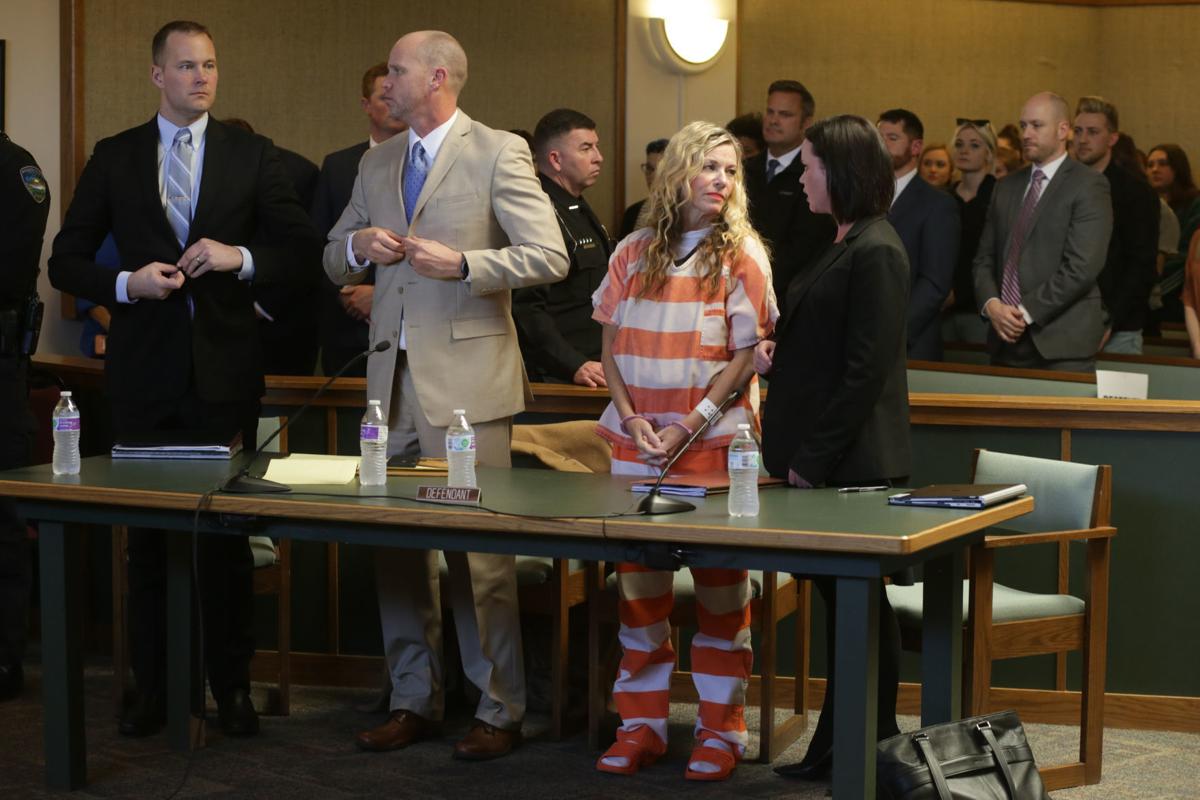 Lori Vallow and her attorneys wait to leave the courtroom after Vallow’s March 6 hearing at the Madison County Courthouse in Rexburg. 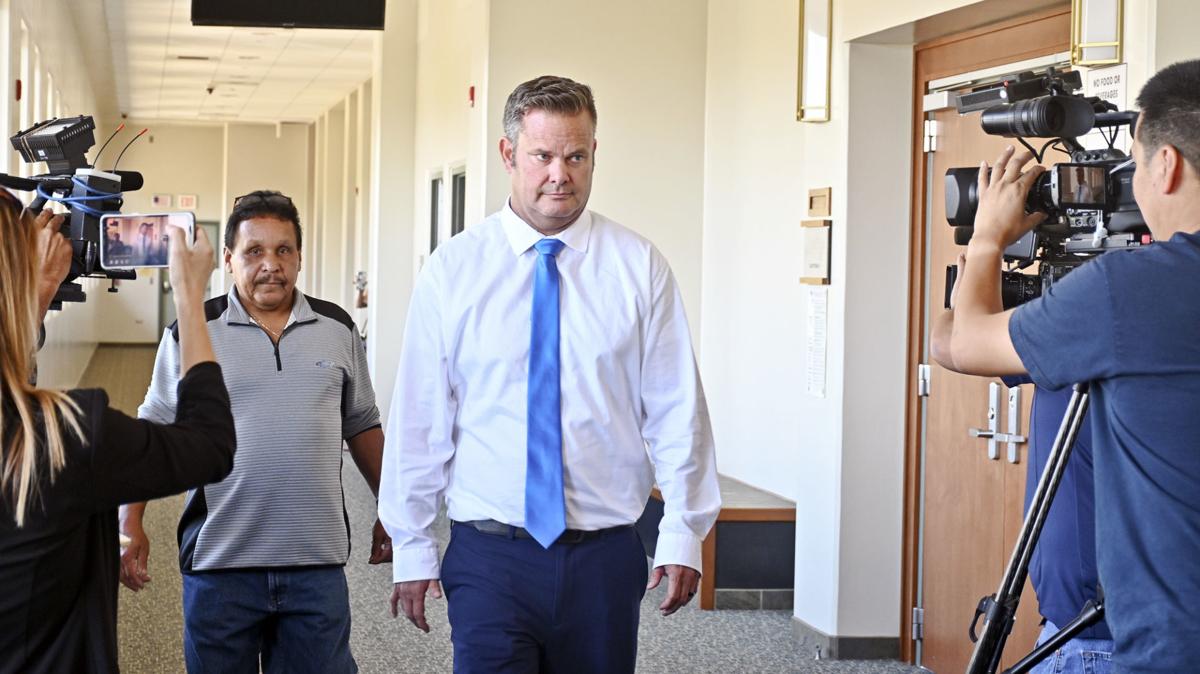 Chad Daybell walks past members of the media on Feb. 23 on his way to the courtroom for his wife Lori Vallow’s extradition hearing in Hawaii.

Lori Vallow and her attorneys wait to leave the courtroom after Vallow’s March 6 hearing at the Madison County Courthouse in Rexburg.

Chad Daybell walks past members of the media on Feb. 23 on his way to the courtroom for his wife Lori Vallow’s extradition hearing in Hawaii.

Vallow is in the Madison County Jail on a $1 million bail as she faces charges related to the September disappearance of her two minor children, 17-year-old Tylee Ryan and 7-year-old Joshua “J.J.” Vallow.

Vallow is charged with two felony counts of desertion and nonsupport of dependent children as well as misdemeanors involving resisting or obstructing officers, criminal solicitation to commit a crime, and contempt of court.

The story of her children’s disappearance and Vallow’s doomsday beliefs captured the nation’s attention and dominated media coverage in the B.C. era — before COVID-19.

Early on in the case, Vallow’s niece, Melani Pawlowski, was accused of being part of a “cult” by her ex-husband Brandon Boudreaux. Within the span of five months, Melani left her marriage with Boudreaux, left her children, moved to Idaho and married Rexburg resident Ian Pawlowski.

Court documents from Boudreaux’s child custody case with Melani and a lengthy statement reported to have been written by Pawlowski were obtained by Fox 10 Phoenix’s Justin Lum.

The documents, first reported by Lum, were obtained from two sources — child custody documents involving Brandon Boudreaux and his ex-wife Melani, and documents Natalie Pawlowski, the ex-wife of Melani’s new husband, provided to Lum. Natalie Pawlowski told Lum the additional documents, allegedly written by ex-husband, were found on a computer that he had given her on Feb. 16.

Taken together, the documents reveal new information about Vallow’s reported religious beliefs and point to possible religious motivations behind Vallow’s and her family members’ actions. Many of the alleged details about those beliefs come from documents found on Ian’s computer by his ex-wife, Natalie Pawlowski.

When Melani left Arizona, she picked up in the middle of the night, left all the children’s belongings on the sidewalk — including items that were “brand new and very expensive” — and moved next door to Vallow in Rexburg. Boudreaux provided photographs of those items sitting on the sidewalk, evidence of her plane ticket to Idaho and the lease agreement to her apartment in Rexburg.

“If (Melani) had any intention of ever having her children with her again, one would think she would have taken their belongings along with her,” Brandon Boudreaux’s custody document said.

Law enforcement later revealed to Boudreaux that Melani had remarried Rexburg resident Ian Pawlowski just weeks after leaving Arizona and that she was pregnant with Pawlowski’s child, Fox 10 Phoenix reported.

The documents also revealed more of Vallow’s religious beliefs, which Melani reportedly shares, according to the custody documents.

The documents outline a strange point system for advancing to eternity as part of ”the church of the 144,000” who will be saved at Christ’s second coming and a reported belief that some people are under zombie-like demonic possession. Some beliefs outlined in the custody documents were also cited by Vallow’s now-deceased fourth husband, Charles Vallow, in his divorce documents. Charles Vallow was killed in July in Arizona by Lori Vallow’s brother Alex Cox.

“There were fun and exciting ideas, but it felt like many of them were ripped straight out (of) a Dungeons & Dragons manual,” Ian Pawlowski reportedly wrote in the statement his ex-wife found.

The document detailed “stats” on which a person was ranked by his or her levels of vibration, libido, trustworthiness, and light/dark percentage.

A prominent belief alleged in the documents was regarding “zombies.” These zombies are “human bodies that have had their original spirits forced from them and have been possessed by either a demon (original third of the heavenly host who followed Lucifer), disembodied spirit (once living human spirits who have chosen not to be reborn into another probation) or a worm/slug (creature controlled by Lucifer that enters the body to control the host).”

When people become possessed by these beings, the original spirit is pushed out of the body and trapped in limbo, the documents said. The only way for the spirit to move forward is to await the death of their current possessed body.

Charles Vallow’s previously released divorce documents said Vallow claimed to be a “translated being.” The documents, reportedly written by Ian Pawlowski, offer more details about these beings. Translated beings “cannot die, cannot reproduce, do not need food or sleep and do not feel the sorrow of the world.”

The writings attributed to Pawlowki claim there are 50 dark translated beings in the world; two of them just happen to be Rexburg police detectives investigating Vallow and her fifth husband Chad Daybell.

The Church of the Firstborn and 144,000 is “a higher organization and God’s church in truest form on Earth.” Pawlowski reportedly wrote that people have had the mysteries of God revealed to them and have multiple groups around the world specializing in different powers. Daybell and Vallow’s group specializes in healing and music, according to Pawlowski’s reported writings.

“Between the stats, accounts of dark and light weapons, and words spoken in blessings, it sounded like someone had created a tabletop RPG (role-playing game) based on the Bible,” according to the writings.

“(Melani) stated that Brandon had been possessed by a demon or another dark entity sometime after June of (2019),” Pawlowski allegedly wrote.

According to Pawlowski’s alleged writings, Melani was told “through revelation or by (Chad Daybell)” that because of Brandon’s possession, “something needed to happen to him.” Apparently, Melani did not “take well to the idea.” She still loved Boudreaux and did not want anything to happen to him, the writings said.

In his alleged writings, Pawlowski revealed that he became concerned after someone attempted to shoot Boudreaux with a gun as he was driving home from the gym. The bullet missed him by inches.

“This is where things started becoming concerning to me. She (Melani) shared the idea that Chad and Lori could have directed (Alex Cox) to take a shot at Brandon,” Pawlowski allegedly wrote.

Cox was Lori’s brother and Melani’s uncle. He reportedly shot and killed Lori’s former husband Charles Vallow in self defense following a July altercation in Arizona. Cox died in December from unknown causes. Both deaths remain under investigation.

Later, the documents allege that Melani feared the same demonic possession logic that may have gotten Boudreaux shot at had been applied to Tylee and J.J.

“Melani had been told by Chad and Lori that their children had been possessed and had become zombies … she told me she was worried that (Cox) may have had to ‘take care’ of the kids,” Pawlowski allegedly wrote.

Apparently, Melani didn’t doubt that this was something Cox was capable of doing to her cousins.

“She explained that (Cox) had great faith and never wavered in his trust in the Lord. No task would be too difficult or great for him,” Pawlowski allegedly wrote.

That’s when Pawlowski started to panic.

“At that point I became worried, but told myself there’s no way I just married into a situation so sinister. I spent the next two days trying to justify my actions and reassure myself that everything was fine, but I couldn’t get to that point,” he allegedly wrote in the documents found by his ex-wife.

Shortly after, Pawlowski’s ex-wife Natalie decided to go to the police about Melani. Natalie was concerned for the safety of the children she shared with Pawlowski. Pawlowski reportedly decided to go with Natalie to help “lay out everything I understand” to the Rexburg police.

The police reportedly gave Pawlowski a device to secretly record phone conversations with Daybell and Vallow, but the child custody documents said he was never able to capture “anything substantial.”

According to his alleged writings, Pawlowski said he eventually admitted to Melani that he’d been talking to police. Pawlowski said Melani is no longer sure what she believes about the “religious aspects” anymore.

“I’ve come to believe she truly doesn’t know anything about who shot at Brandon or where the kids (Tylee and J.J.) have gone … Melani has been put through the ringer because of their (Chad and Lori’s) paranoia and now is in the hot seat because I went to the police and tried to help. I know she’s done nothing wrong and I want her free from this,” Pawlowski allegedly wrote.

As for Daybell and Vallow, Ian wrote that he still has his doubts and lots of questions.

“Why not simply provide proof that the kids are okay and put an end to this insanity? Isn’t it off that the two detectives assigned to your case happen to by 2 of the Cain’s dark fifty? … Your kids are missing and it doesn’t come up once during a handful of lengthy conversation?”

Boudreaux declined to comment on the custody documents. The next custody hearing for Boudreaux and Melani’s children is set for March 26.