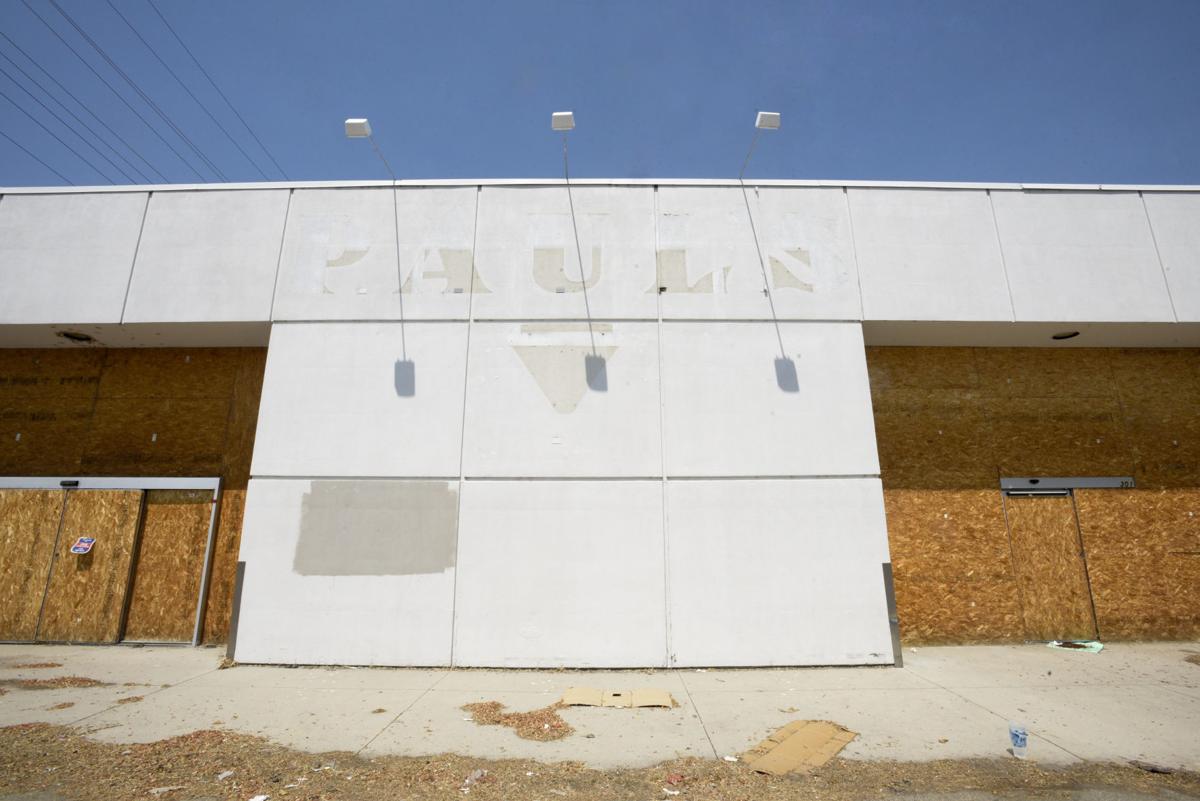 Paul’s Market closed in 2013 at 301 11th Ave. N. in Nampa. The building, seen here on July 27, 2018, is now part of an Opportunity Zone that encourages entrepreneurs to invest capital gains in a low-income area.

Paul’s Market closed in 2013 at 301 11th Ave. N. in Nampa. The building, seen here on July 27, 2018, is now part of an Opportunity Zone that encourages entrepreneurs to invest capital gains in a low-income area.

The Republican-led Tax Cuts and Jobs Act of 2017 reduced taxes on businesses and individuals, and it gave economic developers across the country a new tool intended to revive struggling corners of America.

Alongside changes to the tax code, the bill included an incentive program called “Opportunity Zones,” aimed at encouraging business owners and individuals to invest their capital gains in low-income areas. Capital gains are profits from the sale of a property or investment.

Each state was allotted a set number of zones, and Idaho ended up with 28, including five in the Treasure Valley.

The program allows anyone who uses capital gains to invest in an opportunity zone — whether that be in a business, real estate development, piece of property or other project — to defer their capital gains taxes while they hold the investments, according to Idaho Department of Commerce spokesman Matt Borud.

“There is something to the effect of six trillion dollars in unrealized, unused capital gains (in the United States),” he said. “Value that is out there in stocks, real estate businesses, that could be sold for a gain and then could be pumped back into the economy.”

In order to participate, investors need to create “Opportunity Funds” to put their money into the zones and realize the tax benefit.

Opportunity Zone rules were only finalized in the fall, so local officials say the program has had little impact so far, but the hope is that it will bring investment.

Cities had to apply for an opportunity zone, and then-Gov. Butch Otter made the final call. The five Treasure Valley zones are in Boise on the Bench, north Nampa, Meridian and two encompassing Wilder and Parma in northwest Canyon County.

Census tracts could qualify as an opportunity zone only if the tract had an individual poverty rate of at least 20 percent and the median family income was up to 80 percent of the are median income. In Idaho, 109 tracts qualified, and 59 were submitted as possibilities.

To score the tracts before the governor made his selection, the Commerce Department looked at each area’s possibilities for investment, available infrastructure and major businesses that had recently opened or closed, Borud said. Otter and then-Lt. Gov. Brad Little wanted the zones to be spread throughout the state and lift up rural areas especially, according to Borud.

Just because a tract met the low-income requirement didn’t mean it was high up in the running to become an opportunity zone. Borud said that certain tracts, like downtown Boise, have a high number of low-income residents but were not in need of an economic boost in the same way other parts of the state were.

All of the investments and tax deferrals are handled through the U.S. Department of Treasury and the Internal Revenue Service, so Borud said the state has no way of measuring whether or not the zones have been used to spur any development yet. However, he said there have been a lot of inquiries and questions from the business community so far.

The city of Boise had 14 tracts that qualified, but only one on the central Bench was chosen. It’s bordered by Interstate 84, Curtis Road and Orchard Street and includes Saint Alphonsus Medical Center, Borah High School and the tank farm that stores the millions of gallons of fuel piped into the city from Salt Lake City.

Nic Miller, economic development director for the city of Boise, said that while the city was disappointed to get only one zone, the Bench tract was one they were hoping for because of its proximity to downtown, commercial areas with vacant storefronts, high concentration of locally owned businesses and potential for infill development.

“It’s one of the biggest residential neighborhoods we have in the city, if not the biggest, so we felt the potential to impact the largest amount of people in a positive way was something we should all be excited about,” Miller said.

According to the Idaho Department of Commerce’s website, the area is home to 4,901 residents with nearly a 30 percent poverty rate. In comparison, all but one of the surrounding census tracts have a poverty rate at or below 20 percent.

“Our hopes for any area of Boise is that no area falls behind for lack of vibrancy, investment, local businesses, that each neighborhood has their own commercial corridor and center of activity,” Miller said. “We see (the zone) as an opportunity to bring that even more so to the Bench.”

This is not the first instance of the city expressing interest in increasing investment in the neighborhood. A section of the Bench along the major corridors of Vista Avenue, Overland Road, Orchard Street and Curtis Road north of Franklin Road is also currently under study with Boise’s urban renewal agency, Capital City Development Corporation, as a possible urban renewal district. The results of this study should be completed by the end of the year, which will determine whether or not the area is eligible. It overlaps with the opportunity zone in some places, but the urban renewal district is larger in scope.

Since gaining its designation as an opportunity zone, a portion of Nampa just north of the downtown area has seen little impact as far as development. Economic Development Director Beth Ineck said she has met with several real estate brokers and property owners to educate them about the opportunities involved with the designation, but so far she is not aware of any projects that have taken place within the zone.

Nampa’s opportunity zone is home to about 4,000 people, many of whom have lower-than-average incomes. According to the U.S. Census Bureau, about 42 percent of the residents are in poverty, with 16 percent in deep poverty. Empty buildings in the area have also remained vacant, including a building that used to hold Paul’s Market, which closed in 2013.

Any recent efforts to help the residents of this zone appear to be solely community-led. A collaboration among community members, St. Luke’s and Saint Alphonsus launched a weekly shuttle that gives residents free rides to the grocery store, and another group is working to build a food pantry, which the Nampa City Council recently denied a lease agreement for the structure to be built on a portion of Lakeview Park.

Tina Wilson, executive director of the Western Alliance for Economic Development, said in 2018 she accompanied representatives from five out-of-state companies on site visits. She said they were specifically looking for land in opportunity zones.

Wilson said the alliance is working with the Idaho Department of Commerce to develop materials and online resources marketing development opportunities near Wilder and Parma. The area’s access to key transportation like the Union Pacific Line, the Boise Valley Railroad, U.S. 95, Highway 20/26 and State Highway 19, as well as reasonably priced land near larger distribution and manufacturing areas, makes it an attractive place for growing businesses.

“Caldwell has become this hub for manufacturing, with quite the industry for food processing,” Wilson said. “Prospective businesses might capitalize on these manufacturing areas.”

The Wilder and Parma census tracts are also ideal locations for affordable housing projects or workforce residences, a desperate need in western Canyon County. There are few affordable housing options available for rural residents — 2017 data from the U.S. Census Bureau recorded fewer than 1,500 overall housing units in both Wilder and Parma. Canyon County farmers relying on growing numbers of Mexican nationals in the country on H-2A Temporary Agricultural Visas are running out of places to house them.

“I have been trying to express the opportunities for dealing with workforce and affordable housing,” Wilson said. “We are so short on housing across the Treasure Valley — but especially in western Canyon County — that I kind of bring up first.”

The city of Meridian’s opportunity zone covers part of its downtown in northeast Meridian, from Interstate 84 to East Fairview Avenue and South Cloverdale Road to Meridian Road.

Along with the tax benefit, there are a lot of opportunities for development and in-fill in this area, said Cameron Arial, community development director for the city.

The city of Meridian has fielded inquiries from 10 to 20 businesses and investors looking to relocate or invest in its opportunity zone, according to Arial.

One of those interested businesses is regional investment fund Galena Opportunity Fund, which plans to file a development application in April for a new commercial and residential development in Meridian’s opportunity zone, according to Bill Truax, manager of the fund.

The development would include 150 to 180 residential apartment units and about 8,000 to 10,000 square feet of retail space, said Truax.

Truax said they haven’t settled on a location yet, but they plan to build somewhere in Meridian’s Old Town area between East Pine Avenue and East Fairview Avenue.

“The opportunity zone is going to make a good deal better, not make a bad deal good,” he said. “If we didn’t believe the fundamentals of the downtown Meridian market were good, we wouldn’t make it.”

Truax said the apartments will serve as affordable and workforce housing, meeting the needs of those who make about Ada County’s median household income — about $60,000 — or about 80 percent of that.

The fund is “trying to do workforce housing” in downtown Meridian “because we think that is what is really missing,” said Truax.

Truax said at this early stage in the development, he did not have an estimate for what tax benefits he would receive for using the opportunity zone.

Meridian’s opportunity zone has a higher-than-average citywide poverty rate at 11.5 percent and 5.7 percent unemployment, according to U.S. Census data.

The city and its urban renewal agency, Meridian Development Corporation, have been working to revitalize downtown and encourage developers to build there. City staff have eased the building requirements in downtown Meridian, including allowing taller buildings and slashing parking stall requirements.

The urban renewal agency is also installing sidewalks on stretches of East Carlton Avenue and East Third Street in downtown Meridian, and added around six parking spots to downtown in 2018.

Arial said he’s optimistic about the growth the zone will spur in Meridian. He said anecdotally, the majority of interested developers are looking at projects in the $25 million to $100 million range. A tax eliminated or reduction on a project of that size could mean the project size or scope is increased, he said.

“I think for the citizens, what will inevitably happen is you’ll start to see things that are underdeveloped … redeveloped into things that could be phenomenal,” he said.