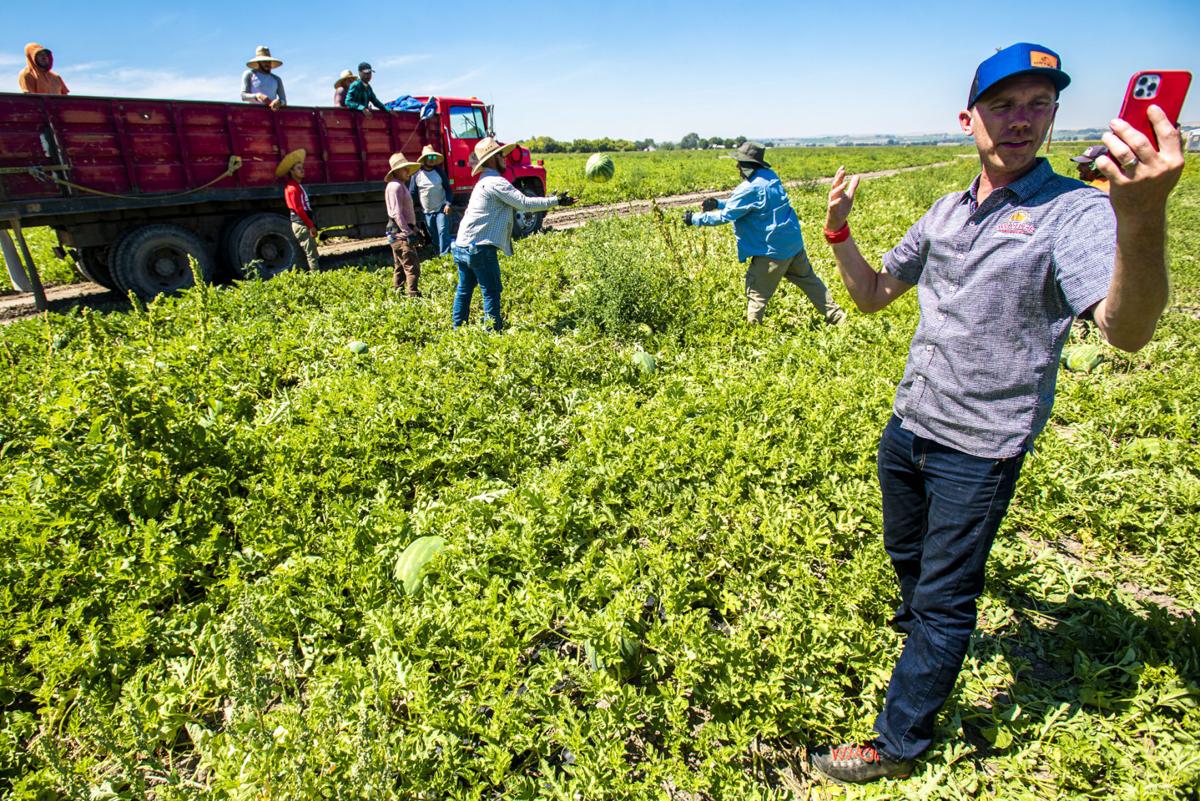 Shay Myers, right, records a video for TikTok on a watermelon field while staff load the fruit into trucks on Wednesday, Aug. 11, 2021 in Nyssa, Oregon. 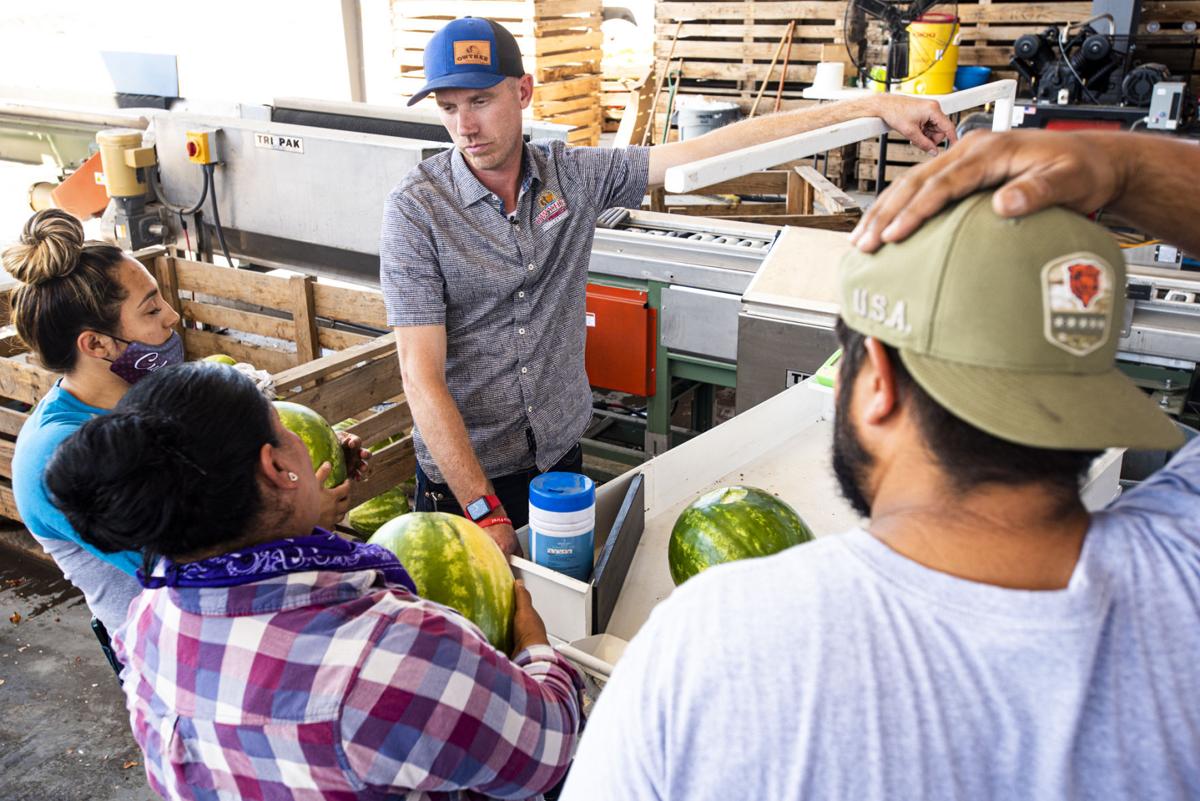 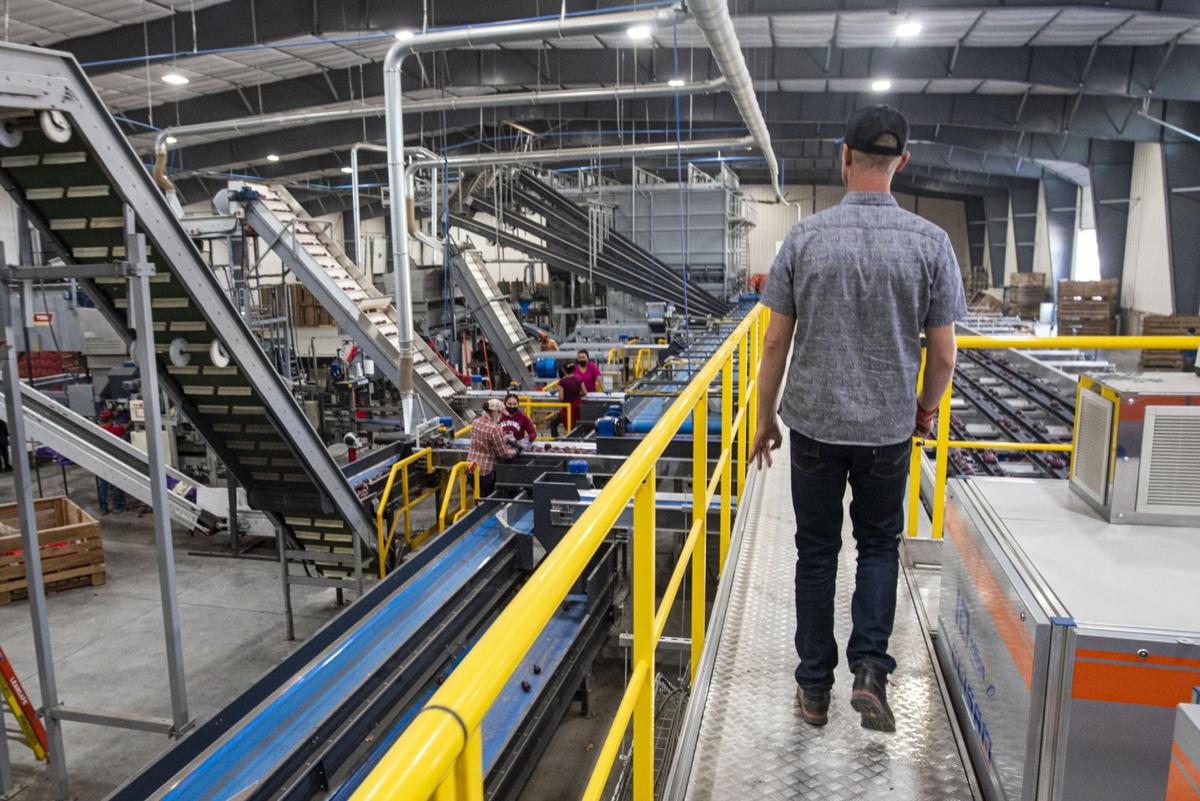 Shay Myers walks through the processing plant at Owyhee Farms on Wednesday, Aug. 11, 2021 in Parma. 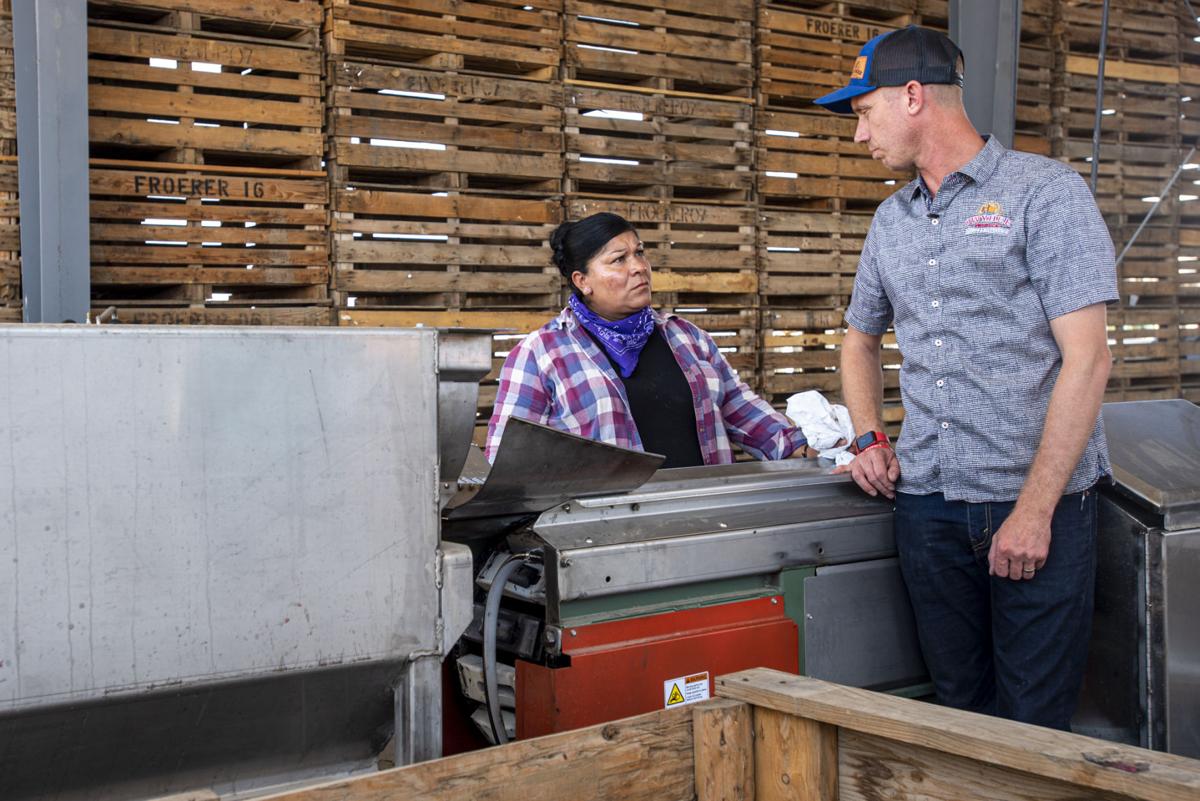 Shay Myers, right, speaks with an employee at Owyhee Farms along the watermelon polishing line on Wednesday, Aug. 11, 2021. 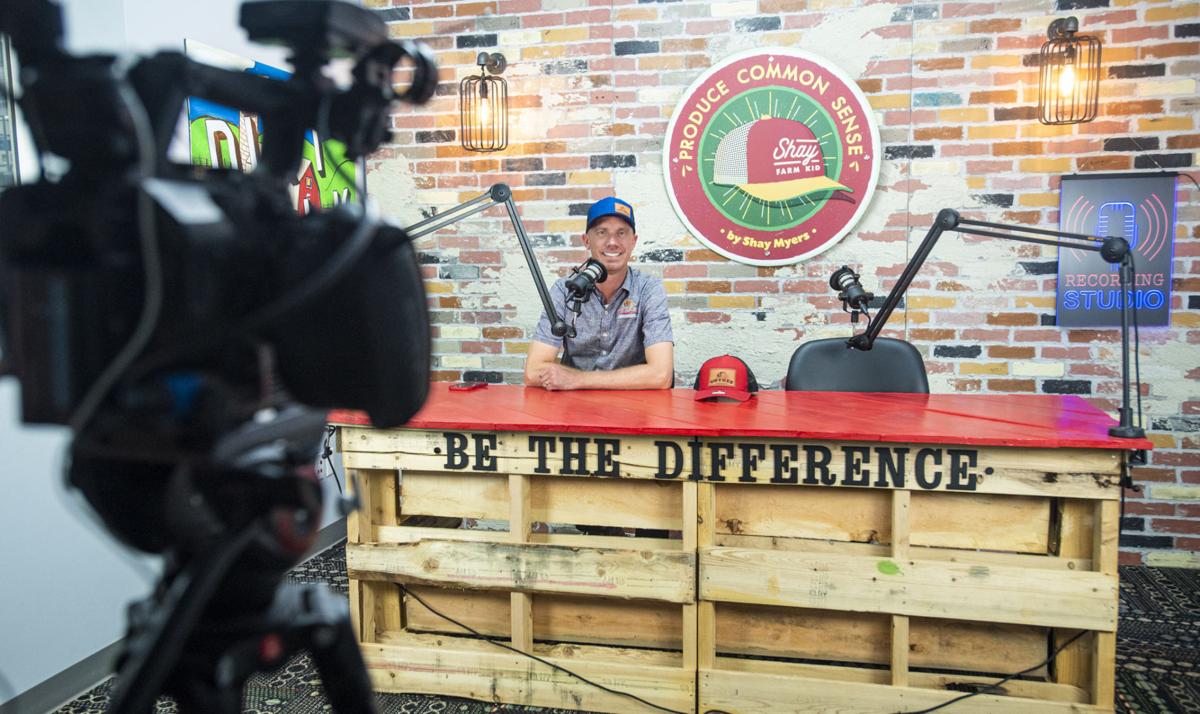 Shay Myers poses for a photo on the set of his new podcast, Produce Common Sense, at Owyhee Farms in Parma on Wednesday, Aug. 11, 2021. 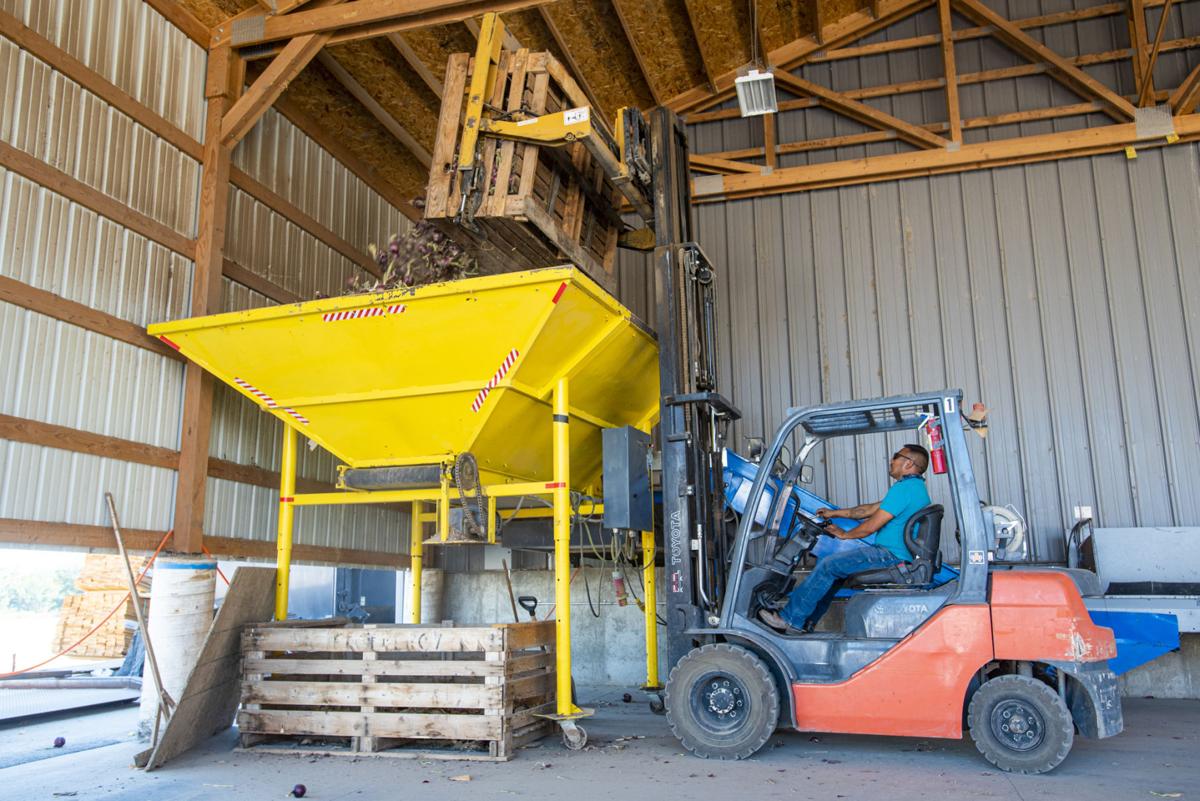 Staff at Owyhee Farms in Parma load containers of onions into a hopper on Wednesday, Aug. 11, 2021. 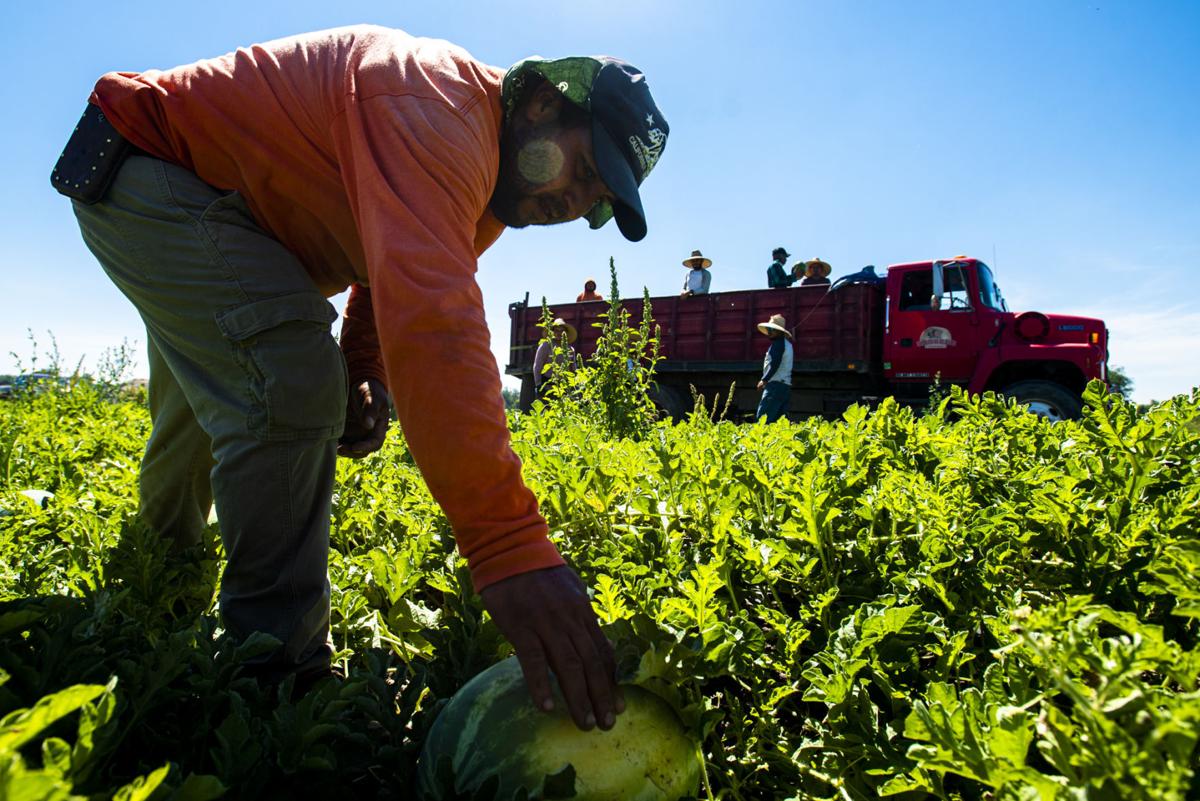 Staff at Owyhee Farms pick watermelon in a field outside Nyssa, Oregon, on Wednesday, Aug. 11, 2021. 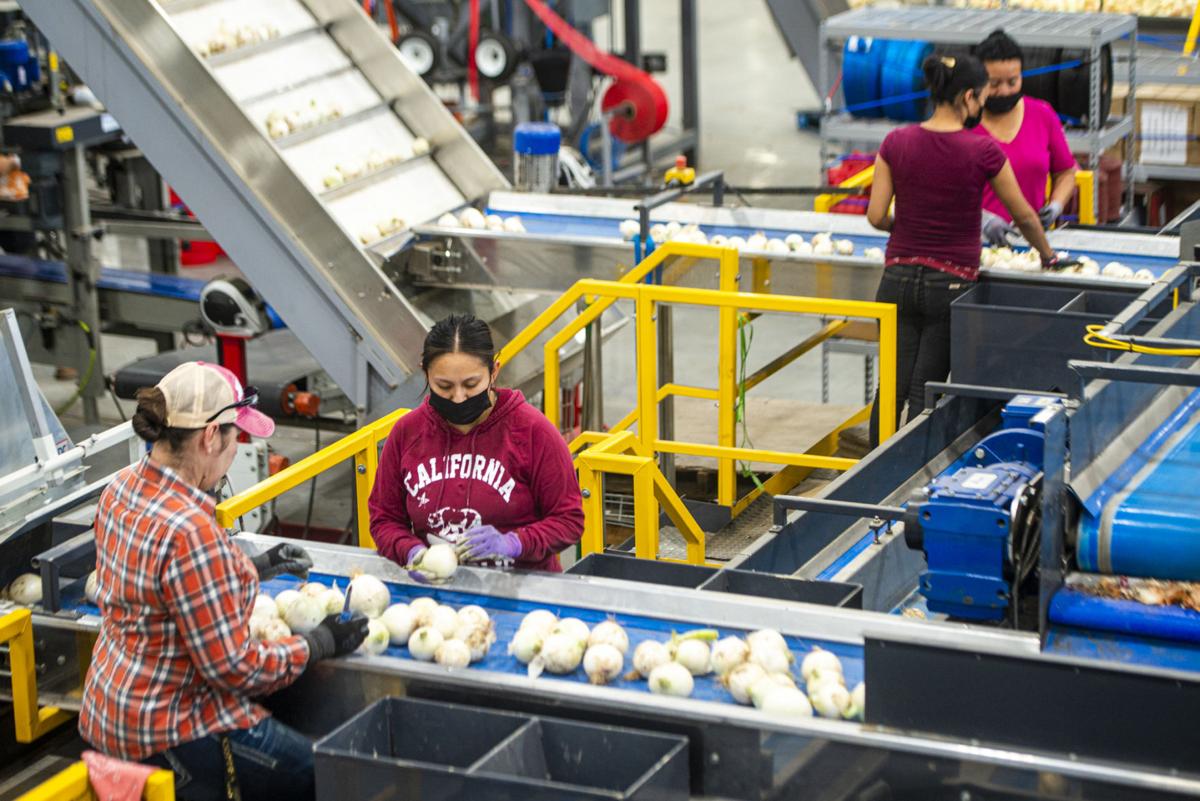 Staff at Owyhee Farms’ processing plant in Parma conduct quality checks for onions before packaging them for sale on Wednesday, Aug. 11, 2021.

Shay Myers, right, records a video for TikTok on a watermelon field while staff load the fruit into trucks on Wednesday, Aug. 11, 2021 in Nyssa, Oregon.

Shay Myers walks through the processing plant at Owyhee Farms on Wednesday, Aug. 11, 2021 in Parma.

Shay Myers, right, speaks with an employee at Owyhee Farms along the watermelon polishing line on Wednesday, Aug. 11, 2021.

Shay Myers poses for a photo on the set of his new podcast, Produce Common Sense, at Owyhee Farms in Parma on Wednesday, Aug. 11, 2021.

Staff at Owyhee Farms in Parma load containers of onions into a hopper on Wednesday, Aug. 11, 2021.

Staff at Owyhee Farms pick watermelon in a field outside Nyssa, Oregon, on Wednesday, Aug. 11, 2021.

Staff at Owyhee Farms’ processing plant in Parma conduct quality checks for onions before packaging them for sale on Wednesday, Aug. 11, 2021.

PARMA — A line of striped watermelons sat nestled in between rows of melon plants in the early afternoon heat. Already picked, the heavy fruits were ready to be tossed one by one along a line of workers and placed in the bed of a truck destined for the sorting plant. Spotting a teachable moment, Shay Myers, owner of Owyhee Produce, pulled out his phone.

“These guys are pitching watermelons today,” Myers said to his phone’s camera, “and I don’t know if you knew this, but all the watermelons that you get have gone through multiple hands.” He turns the phone toward the person lifting the melons from the ground, then toward the line of pitchers tossing a melon from person to person and up to workers standing in the truck bed.

“These guys will get really good and really fast, and, they’ll also get really strong abs because it’s really hard work,” Myers said.

He later uploaded a 40-second video to TikTok, the social media platform that allows users to share short videos. Going by @shayfarmkid, he has garnered over 303,000 followers since his debut in late 2019.

Myers is a third-generation farmer who grows onions, watermelon, and other crops in both Nyssa, Ore., and Parma, along the banks of the Snake River. A self-proclaimed “agripreneur,” he keeps a higher public profile than the average farmer, advocating for immigration reform and attempting to educate people about where their food comes from. He has appeared on Telemundo and CBS, and spoke before the Senate Judiciary Committee in July about threats to continued agricultural prosperity in the U.S.

One topic he feels passionately about is keeping U.S. farmers in business. If policy is not created to reform the immigration process in the U.S. and better support farmers, he is concerned all production of non-staple crops could move south of the border within a decade. He said so in his testimony to the judiciary committee.

“Emotionally, I don’t feel like I’m exaggerating,” Myers said in an interview back in Parma.

His business pays workers between $14 and $16 per hour. But seven years ago, he paid $9 per hour, he said. The increasing cost of agricultural labor in the U.S. makes doing business south of the border, where wages are $0.50 to $1.50 per hour for similar work, increasingly attractive to businesses, he said. Companies also have fewer environmental regulations to comply with outside the U.S., he said. Either businesses will choose to move operations to Mexico or will consolidate to stay in business, Myers said.

But he prefers an alternative. He is interested in creating a U.S. food producers cooperative that could lobby Congress to help keep farmers in business, but he thinks educating consumers could prove even more effective.

Myers, who was born in 1980 and is 40 years old, is on the border between generation X and millennials. His social media followers are primarily people ages 24 to 35, he said.

For Dan Corn, who farms onions, shallots and other crops in Oregon, Myers’ idea that production would move entirely south of the border in 10 years seems unlikely.

“I don’t see it quite as negative as Shay does on that stance,” Corn said, adding that while it is an issue that needs to be addressed, he does not think production in the U.S. will vanish in a decade. Among farmers, there are often a wide variety of opinions on many topics, and Myers is one person in the community, he said. Though they will not agree on every issue, he thinks of Myers’ efforts as largely positive, he said.

“We’re going to lose these family farms if we don’t make changes,” Rodriguez said, “and he’s a good advocate and a good voice for that.”

Though Myers grew up doing and enjoying farm work, he did not plan to make it his career. He wanted to be a corporate pilot, but soon learned that the road to achieve that goal was long and not initially well-paid. Plus, he felt obligated to continue building the business that his relatives had established. Being an agripreneur has given him the freedom to innovate in his business, educate people about the challenges farmers face, and advocate for change.

He first shared his ideas through LinkedIn in 3- to 4-minute videos. But, during a dinner at a trade show in Phoenix, he realized he needed to change tactics and topics. That evening, a produce buyer asked Myers to show him a picture of an onion tree.

“That was a moment when I’m like, ‘OK, whoa, whoa, whoa. I gotta stop talking about market trends or price projections, or technology that’s obscure, specific to the industry, and get down to brass tacks,’” he said.

He started making shorter, simpler videos and posting them to TikTok. (Historically, TikTok users could only create minute-long videos, but the company announced in July it will allow users to make up to 3-minute videos.) He can make videos that are straightforward, raw, and don’t require heavy editing, all of which suits his style.

Myers launched his TikTok at a good time: The platform gained many users during the early days of pandemic stay-at-home orders, and Myers’ followers skyrocketed. Later in 2020, he also started an Instagram, and thinks his TikTok traffic flowed over to that platform. He now also has a YouTube channel, and last week, he launched a new podcast called Produce Common Sense. The title is a double entendre as “produce” can be pronounced as either the verb or the noun, he said. He plans to create longer shows there where he can discuss ag-related topics with experts.

The topic of Myers’ TikToks ranges widely, from multipart series about why asparagus can’t be picked by machines, to thoughts on conventional versus organically grown produce, and the various steps of onion harvesting and processing.

People eat it up.

“We need someone like you for every crop in the U.S. so that people who aren’t familiar with agriculture understand the process!!” one user commented on a video about drying onions in a storage facility.

“That’s how he tells the story — a lot of things that us as farmers probably wouldn’t report on because we’ve done them forever and they don’t seem that interesting, but he tells a good story,” Corn said.

Other farmers might upload a video here and there mostly for their friend group, but it is “not nearly as focused” as what Myers does, Corn said.

“As a DACA recipient, THANK YOU!!!!!!!!!!!!!! GRACIAS!!!!” another user commented on a video Myers posted while in Washington, D.C. DACA, or Deferred Action for Childhood Arrivals is a federal program that allows children brought to the U.S. by their parents at a young age to live and work in the U.S. legally. Myers has said he favors a path to citizenship for farmworkers.

In his TikTok profile, Myers says he is a “lover of Spanish.” Occasionally, Myers shares videos where he speaks in fluent Spanish, such as one TikTok in which he asks members of a field crew what they like and dislike about coming to the U.S. on an H-2A visa. The visa permits workers to come to the U.S. temporarily to work in agriculture.

Another staple of Myers’ TikTok are videos in which he addresses a viewer’s written question or comment from a previous video. In a video with the thumbnail, “Porque [sic] Los Estadounidenses se llaman americanos?” Myers responds, in Spanish, to a Spanish-speaking viewer who had asked why people in the U.S. call themselves Americans.

“You don’t expect that,” he said. Myers is modest about his Spanish-speaking ability, but he speaks Spanish “perfectly,” de la Tejera said.

Sometimes the videos are practical. In April 2021, Myers made a video to call for help. A crew of temporary workers was detained at the border and was not going to make it in time to harvest his asparagus crop. Anyone who wanted to could come pick asparagus for free out of his fields. More than 5,000 people answered the call, according to reporting from KTVB.

Of course, there are the detractors, too. Viewers often suggest Myers engages in questionable practices, such as paying workers who are in the U.S. illegally under the table, threatening to call ICE on workers so he doesn’t have to pay them, not paying his workers enough, and not being willing to hire U.S. workers.

Myers thinks people do not understand that not only is the pay — $14 to $16 per hour — comparable with other jobs in the Treasure Valley, he provides benefits to workers such as paid sick leave and retirement plans. And if people in the U.S. want to work for him, he will tell them what he pays and they can have a job, he said.

Such criticism reflects the need for the kind of education that Myers has built into his work.

“If you’re going to make fun of me, or be angry with me, or accuse me of doing things, then you better understand what I’m doing,” he said.