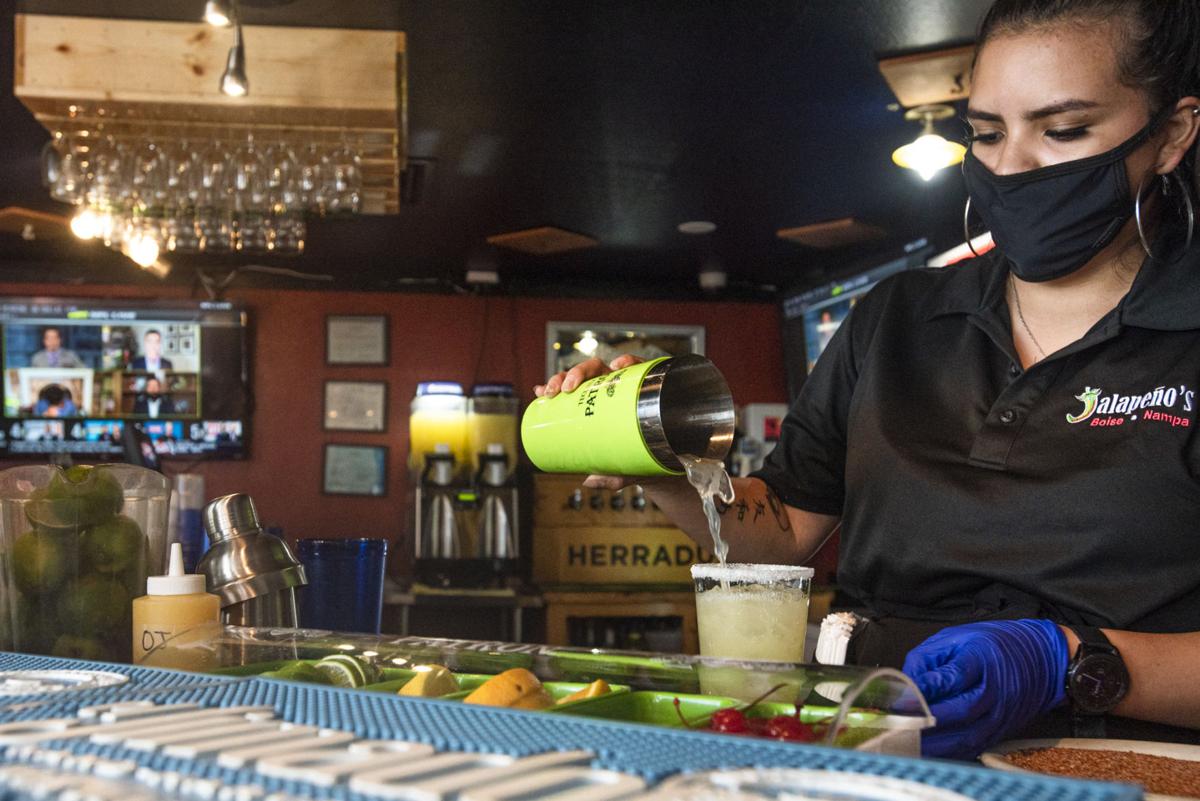 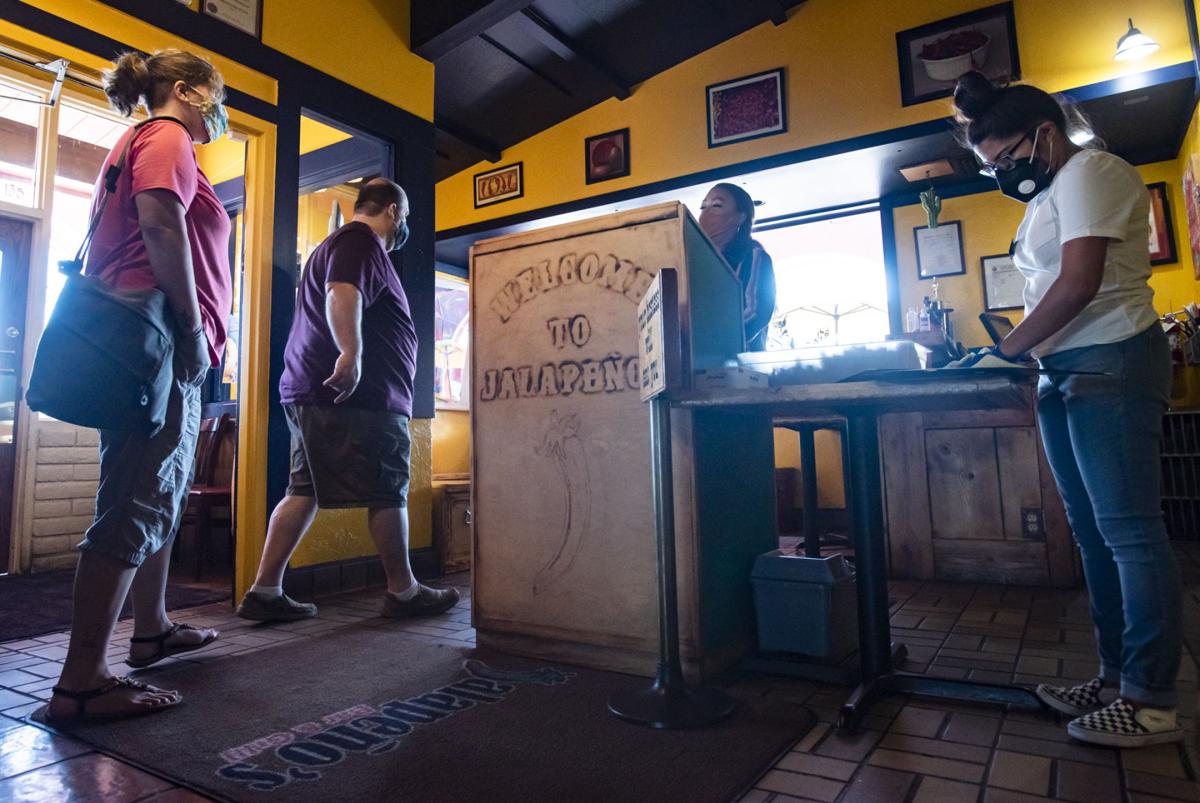 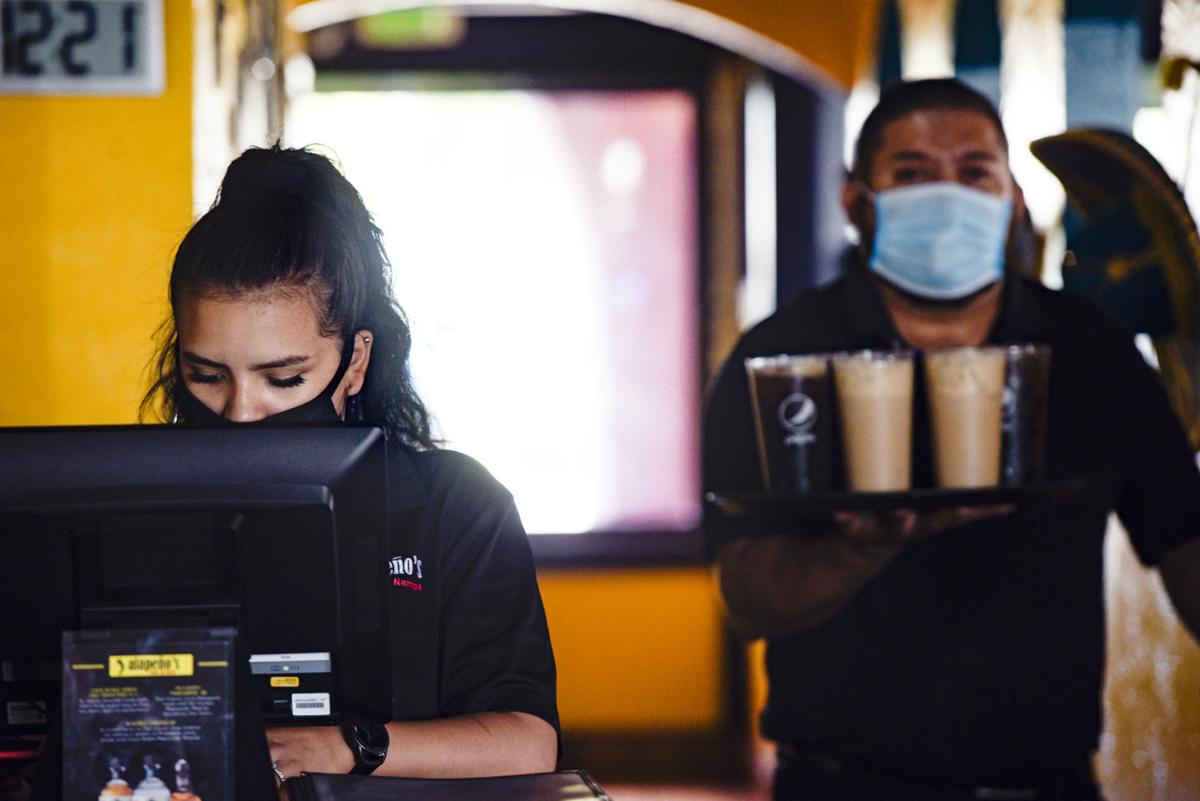 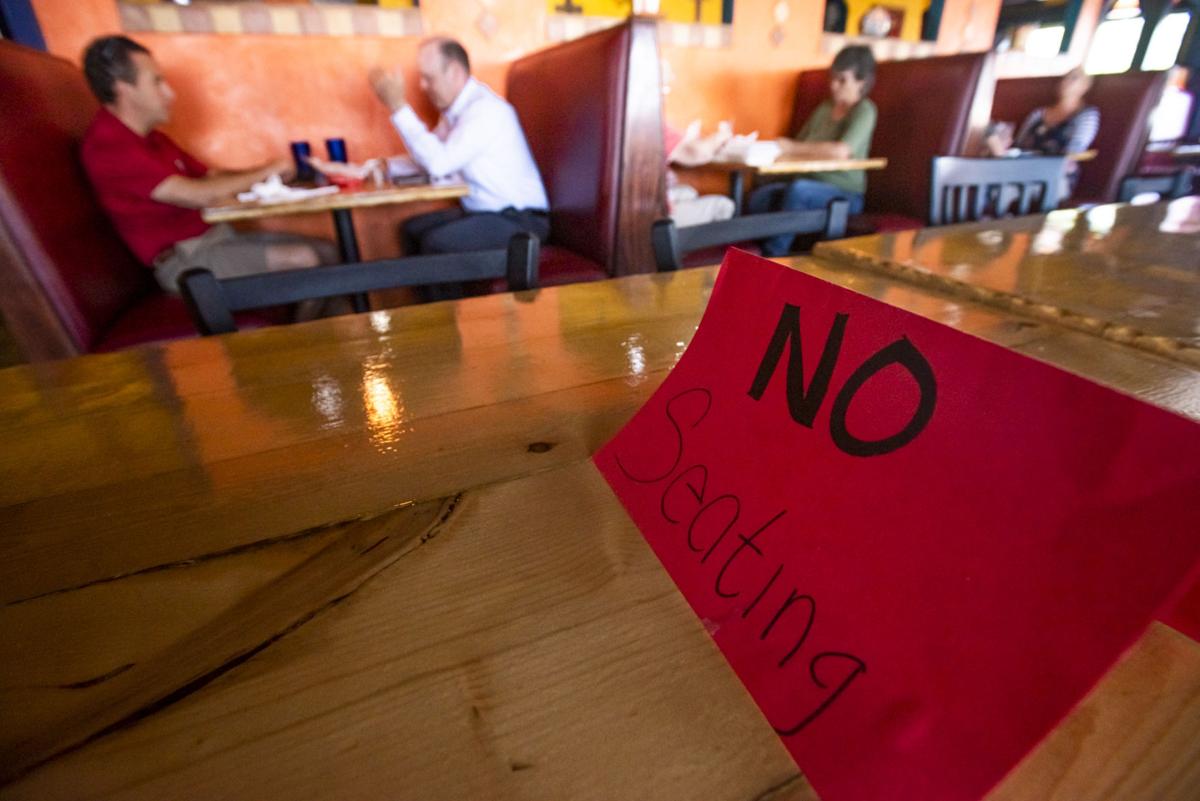 Signs on larger tables in the center of the dining room at Jalapeños Bar and Grill notify patrons and employees that seating is unavailable to accommodate social distancing guidelines on Friday, July 31, 2020 in Nampa. 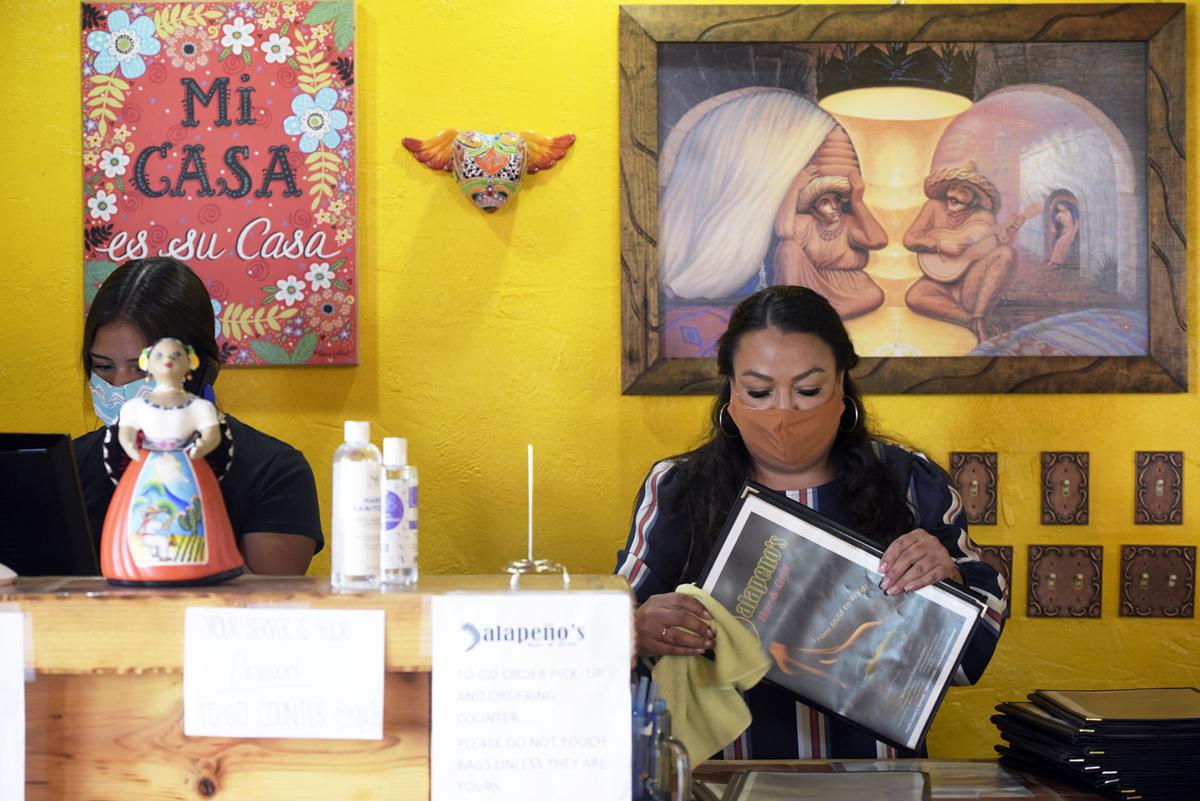 Irma Valdivia, right, sanitizes menus while her employees process takeout orders at Jalapeños Bar and Grill in Nampa on Friday, July 31, 2020. Valdivia, the owner of the restaurant, requires employees to wear masks at all times on the premises. 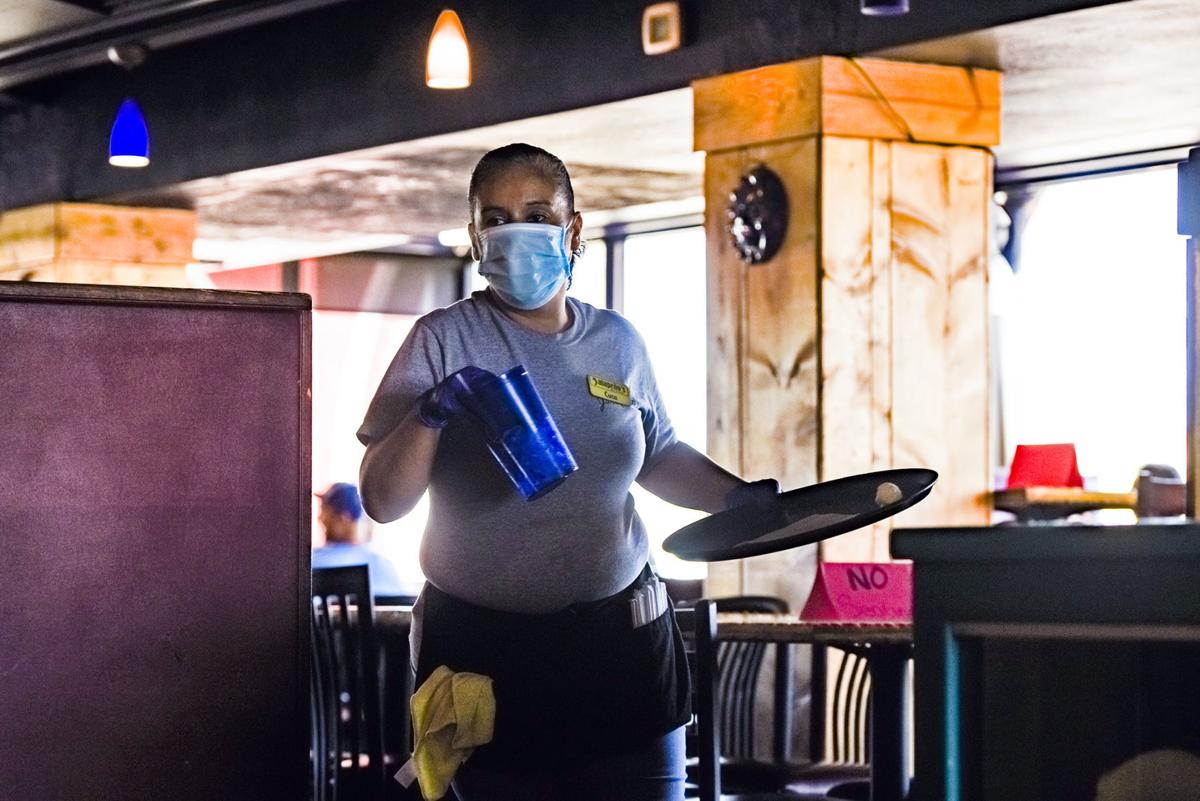 Signs on larger tables in the center of the dining room at Jalapeños Bar and Grill notify patrons and employees that seating is unavailable to accommodate social distancing guidelines on Friday, July 31, 2020 in Nampa.

Irma Valdivia, right, sanitizes menus while her employees process takeout orders at Jalapeños Bar and Grill in Nampa on Friday, July 31, 2020. Valdivia, the owner of the restaurant, requires employees to wear masks at all times on the premises.

Since Central District Health last month mandated masks be worn in public in Ada County, the responsibility of enforcing — or not enforcing — the order has largely fallen to local restaurants, retailers and other brick-and-mortar shops.

Those business owners, many of whom have already taken a financial hit from the coronavirus pandemic and have another potential shutdown looming if cases of COVID-19 don’t decrease, are caught in the middle of a mask debate that has turned political.

For one ice cream shop owner, it’s not about politics, but rather it is about doing whatever is necessary to keep his business running during the economic downturn caused by the virus.

Goody’s Soda Fountain & Candy Store, an ice cream and soda shop in Boise’s Hyde Park neighborhood, was asking, although not requiring, customers to wear masks before a Boise city order that preempted Central District Health’s by about two weeks. The shop’s mask request was about keeping staff safe from the virus, said Goody’s owner Brett Palmateer. Now, armed with two government orders, staff can with more confidence ask customers to mask up if they want a scoop of ice cream or soda from the shop’s 1930s fountain.

“It is nice when we don’t have to take the brunt of the blame,” Palmateer said. “Occasionally we’ll have a customer that will be upset about it, but we’re just very easily able to tactfully say, ‘You know, it really wasn’t up to us.’”

Palmateer said a mask mandate is “probably a good thing,” but his primary goal is keeping the 24-year-old shop open for business.

“If we need to wear a mask to keep our doors open, fine,” he said. “Whatever it takes for me to be open and still have some revenue coming through the door.”

Regulations on face masks differ between Ada and Canyon counties. Central District Health issued a mask mandate for Ada County earlier this month, while Southwest District Health decided against a mandate and instead encouraged masks across its six counties during a special meeting July 23 that previously had been canceled; protesters forced their way into the district’s Caldwell lobby during the original meeting.

Several Canyon County businesses the Idaho Press reached out to said a public mask order would benefit their business during the pandemic.

In Canyon County some businesses are choosing to require masks anyway to mitigate the risk of an outbreak, which could shut down a business for several weeks. Others won’t require masks unless there’s a public order.

Jalapeño’s Bar and Grill has several locations across the Treasure Valley, with differing mask policies depending on which county they’re in.

“We cannot enforce that,” Valdivia said.

Valdivia said she trusts government officials to make the right decisions for their constituents, but she is supportive of mask mandates because health care officials say it’s one of the most effective ways of slowing the spread of COVID-19. She said she does not go anywhere without a mask.

Rediscovered Books in downtown Caldwell requires customers to wear masks despite a lack of a mandate, according to owner Laura DeLaney. The store hasn’t encountered any major issues because of the mask policy, she said, attributing that to the signs posted in front of the business listing its mask requirement.

DeLaney and her husband also own two book shops in Boise. The difference between operating the businesses in Boise and Caldwell is the growing normalization of masks in Ada County, which DeLaney said makes it easier for them to operate.

Masks are essential for their stores remain open, DeLaney said, and she would love to see a statewide mandate. Such a mandate, she said, would make more people feel safe to go outside and visit businesses again. This is especially important for the new Caldwell shop, which opened late last year.

Though there is a mask mandate in Ada County, not all businesses are enforcing it.

Flor De Sol Boutique, a women’s clothing store in downtown Eagle, does not require customers to wear masks, although most customers voluntarily do “without any issues at all,” said owner Elaine Fredriksson.

The boutique opened in March and was immediately affected by the pandemic, Fredriksson said. Flor De Sol began selling its own masks while requiring employees to wear them. The store instituted new cleaning measures and stationed hand sanitizer outside the front door.

Fredriksson hopes local officials will support businesses by allowing them to reopen under their own terms and host events to bring customers back. When asked whether masks should be mandated, she said it’s a tough decision, but ultimately it should be up to individuals to decide.

“I think if you feel comfortable wearing a mask then you should wear a mask, and if you don’t then it should be your right as well,” Fredriksson said. “I’ll wear the mask for (customers’) safety, but I want them to have the right to make their decision.”

The Nampa City Council has not considered ordering a mask mandate, and several council members, including Council President Randy Haverfield, Darl Bruner, Jacob Bower and Victor Rodriguez, said they are against doing so.

Haverfield said he respects people’s decision to wear masks, but he does not feel it is his place to require masks unless there is a federal mandate. He said the only way he would support a mask mandate is if all other regulations, including social distancing and limited capacity, are dropped.

Haverfield owns the Nampa architecture firm, Architecture Northwest, and said he does not require masks for employees or clients. He said he hasn’t encountered any major issues because of this policy.

“I choose not to live in fear,” Haverfield said.

Haverfield said he would not change anything about how Nampa has responded to the pandemic. When Southwest District Health was considering a possible mask mandate, he said he received about 400 emails within a four-day period from residents who were largely against a mandate.

“That means a lot to me,” Haverfield said.

Southwest District Health Board Chairman Bryan Elliott said he does not foresee a mask mandate coming anytime soon, though the board does recommend masks be worn in public when there’s a yellow, orange or red health alert, based on the number of new daily cases. Currently Canyon County falls in red, the highest alert, meaning there are more than five new daily cases per 10,000 people.

Elliott told the Idaho Press Friday the board followed the CDC, which last month recommended masks nationwide. Even if the board enacted a mandate, Elliott said the Canyon County Sheriff’s Office and city police departments do not have the manpower to enforce it.

“People are still going to make the decision for themselves,” he said.

Debbie Johnson, who owns The Funky Monkey gift shop in the tourism-heavy North Idaho city of Wallace, said earlier this summer she was the only shop in town to require face masks.

"Boy, has it been interesting and frustrating," she told the Idaho Press July 5. "You would think I was asking for their souls instead of just a face covering, which I am supplying."

Johnson said she's frustrated the mask issue has become so politicized, despite evidences that masks help prevent the spread of COVID-19.

"People don't seem to understand this from a business perspective," she said. "The shutdown was hard enough financially. If I or one of my employees were to contract Covid, I would have to shut my shop down for a minimum of 14 days. That would be the proverbial last straw on the camel's back of my business, especially in the busy summer months."

"I am not requiring masks to make a 'political statement,'" she added. "I am doing it to keep my business that I have worked my tail off to build for the last 3 1/2 years, and keep myself and my employees healthy."

The order has already made a difference for Johnson, she said.

"It has definitely taken some of the heat off of me, and I'm just so grateful for that. But it just has become such a political issue that ... people can't seem to see beyond that," she said. "They want the economy open and they want the stores open and they want to be able to go places and do things, and yet if we're going to do that, we need to protect the businesses so they can be able to stay open."

Nampa business owner and City Council President Randy Haverfield sees a the pandemic and the safety mandates as politically driven.

Haverfield said he believes people are making the COVID-19 pandemic more serious than it is. He mentioned that the H1N1 virus was "more serious" than COVID-19, but it wasn't labeled a pandemic because it didn't happen in an election year.

The H1N1 virus emerged in 2009, and actually was labeled a pandemic, according to the Centers for Disease Control and Prevention. Within the first year it circulated, the virus killed between 151,700 and 575,400 people worldwide, CDC estimates. The novel coronavirus, on the other hand, has already contributed to more than 675,000 deaths in less than a year, according to the New York Times.

Haverfield said the response to COVID-19 is too severe, and that there have been 18 other strains of the coronavirus before COVID-19. Though there are other types of coronaviruses that infect humans, COVID-19 is named such because the virus that causes that disease was detected in 2019.