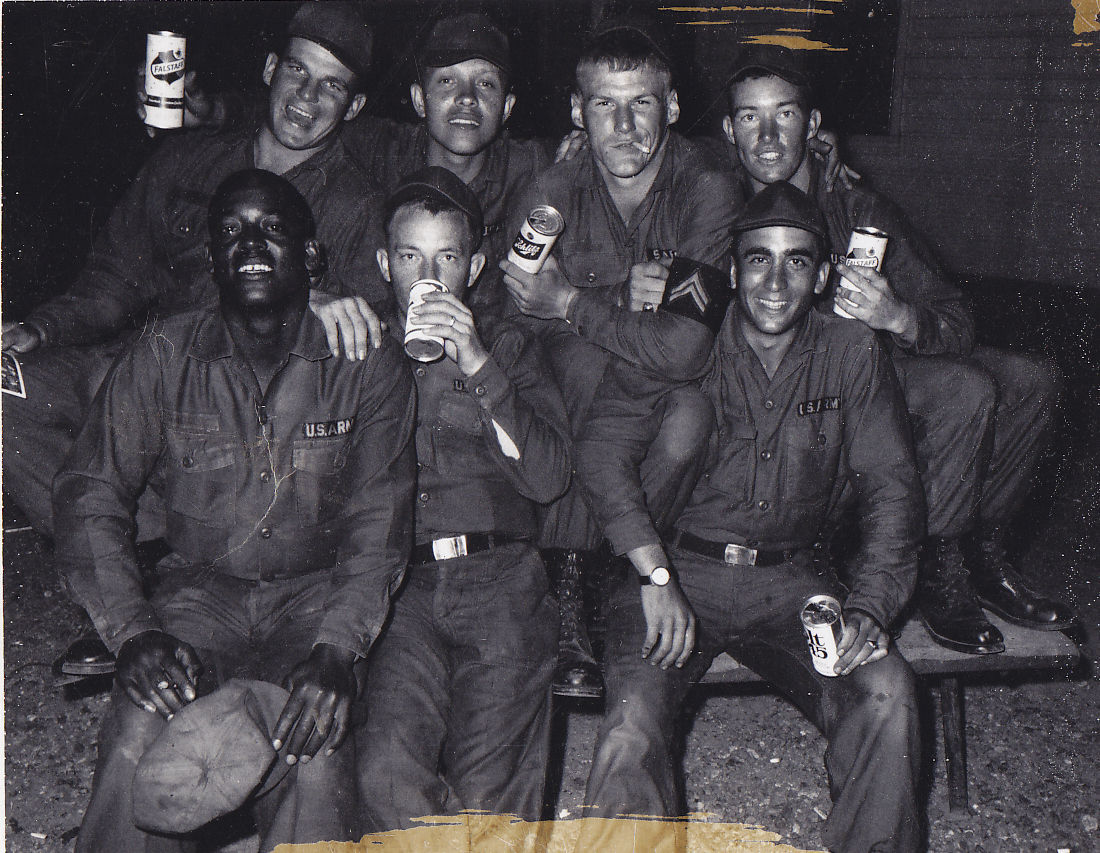 Bill Hamilton, second on the right of the back row, celebrates with his buddies during basic training. 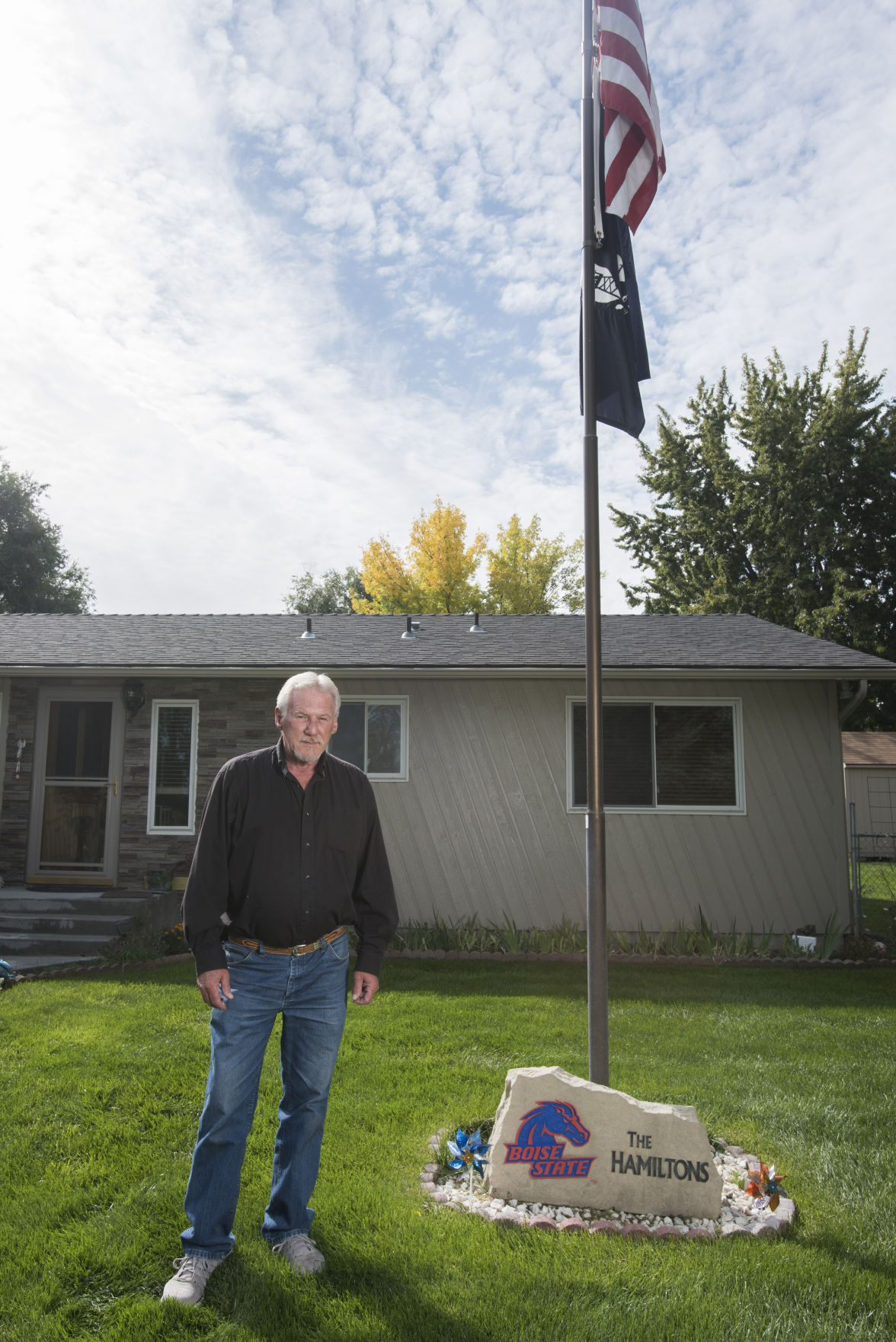 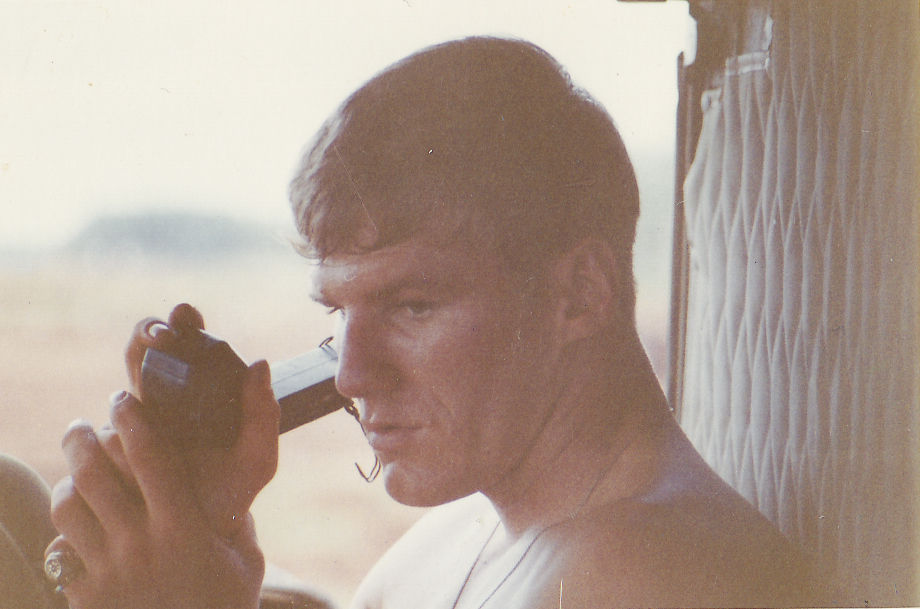 Bill Hamilton served as a crew chief on a UH-1 helicopter during the Vietnam War. Here he is listening to radio traffic while stationed at Loc Ninh in Vietnam. 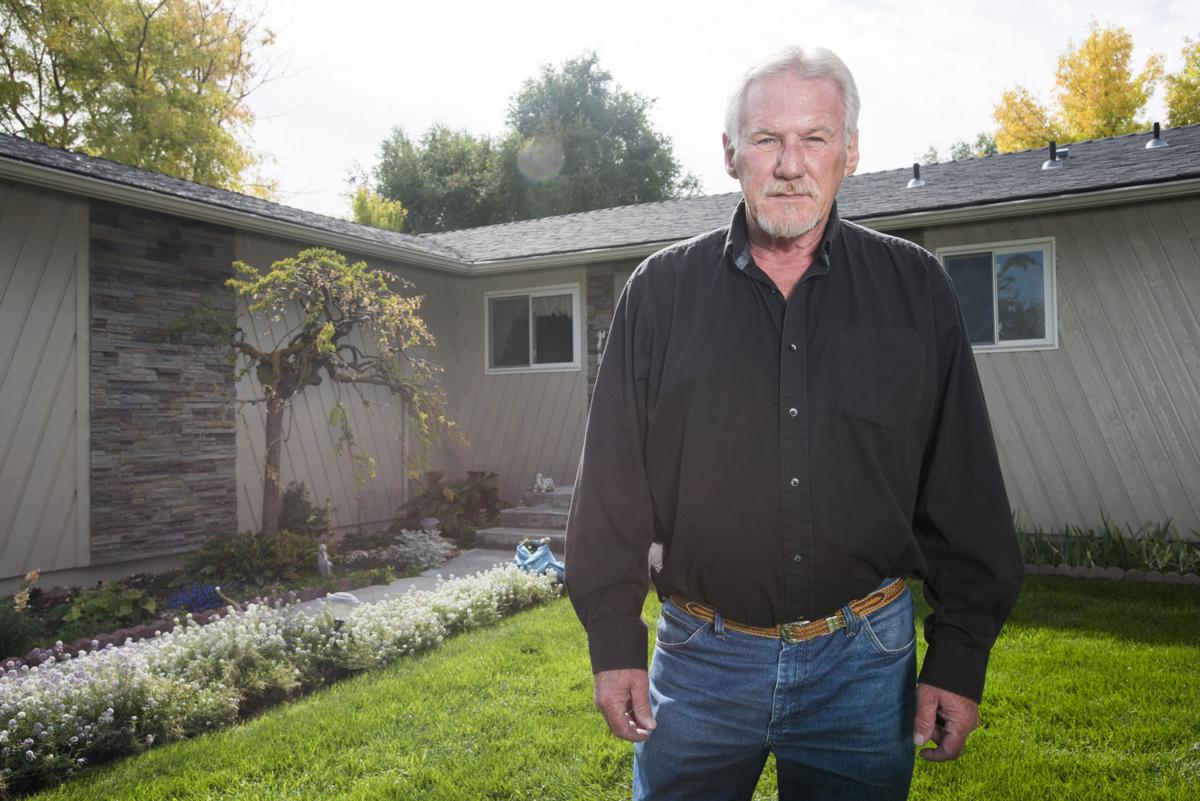 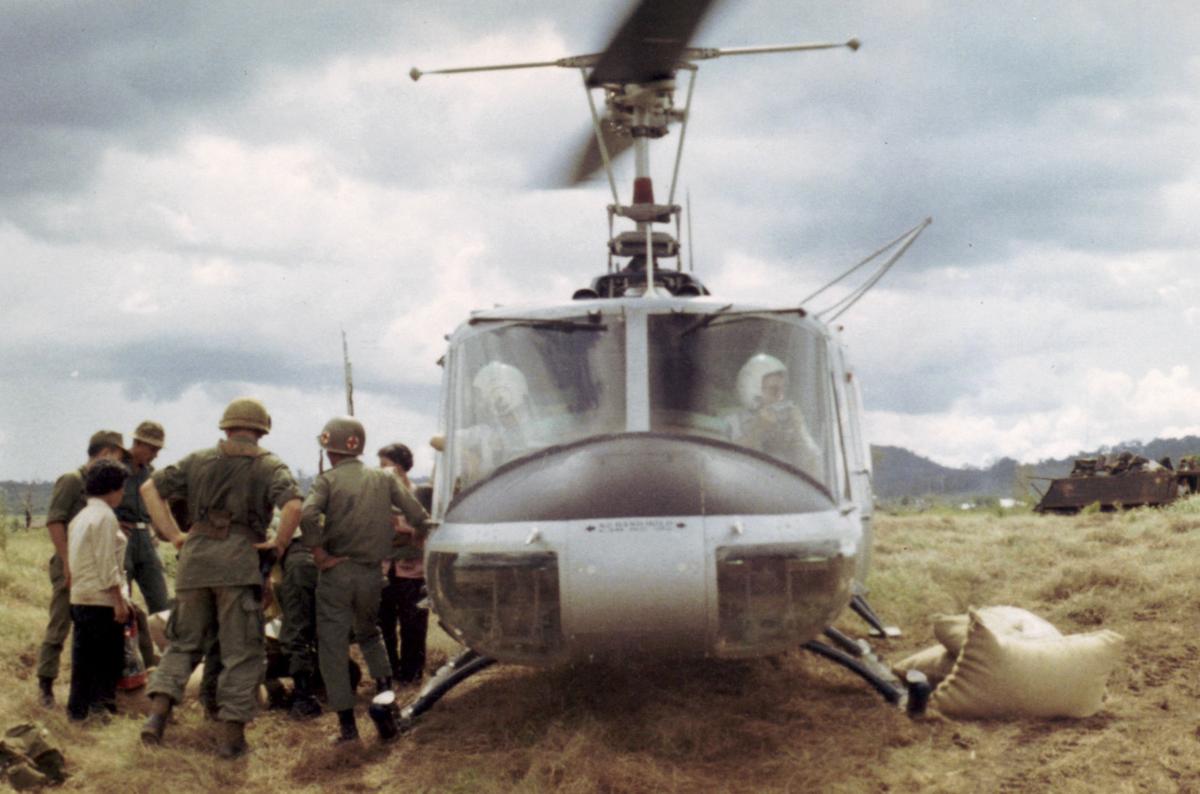 Bill Hamilton served as a crew chief on a UH-1 helicopter during the Vietnam War. 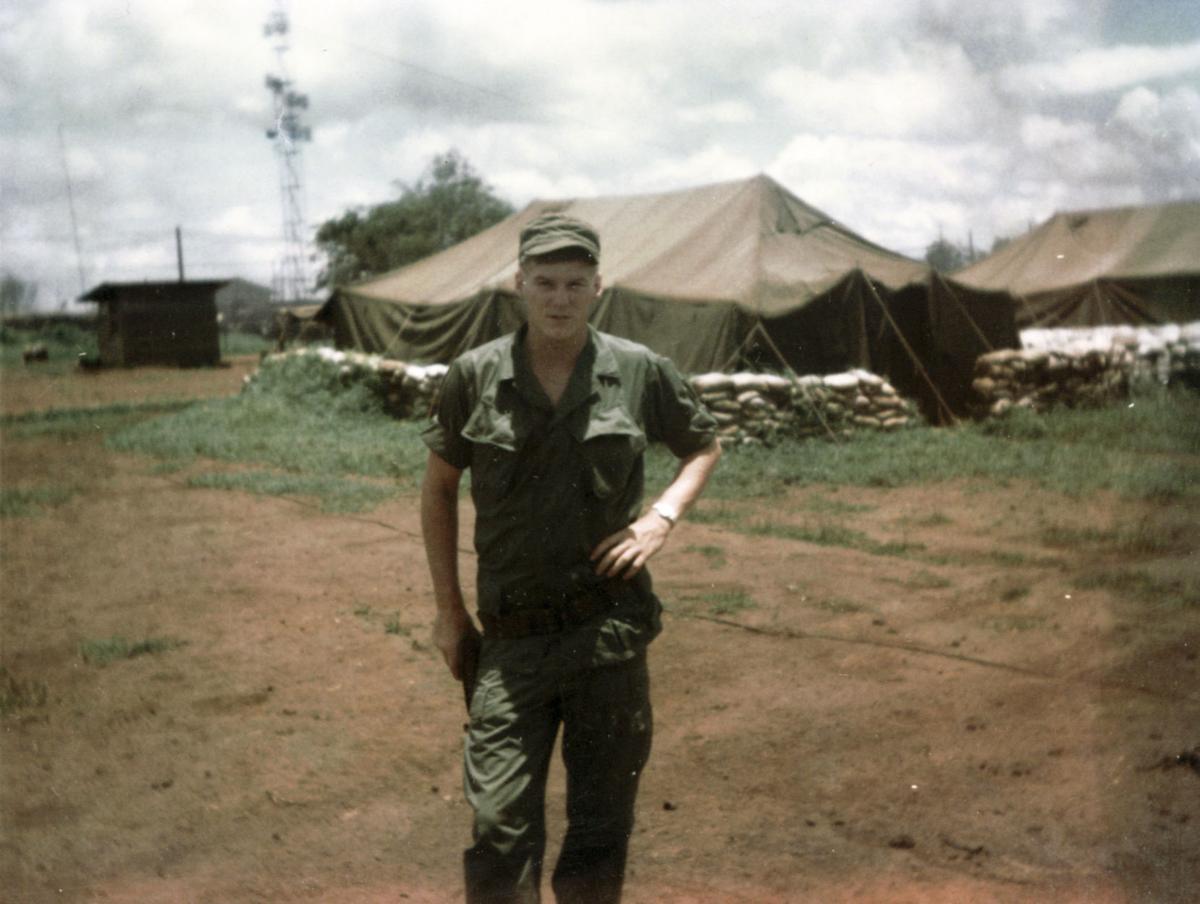 Bill Hamilton poses for a picture while stationed at base camp during his time in service. 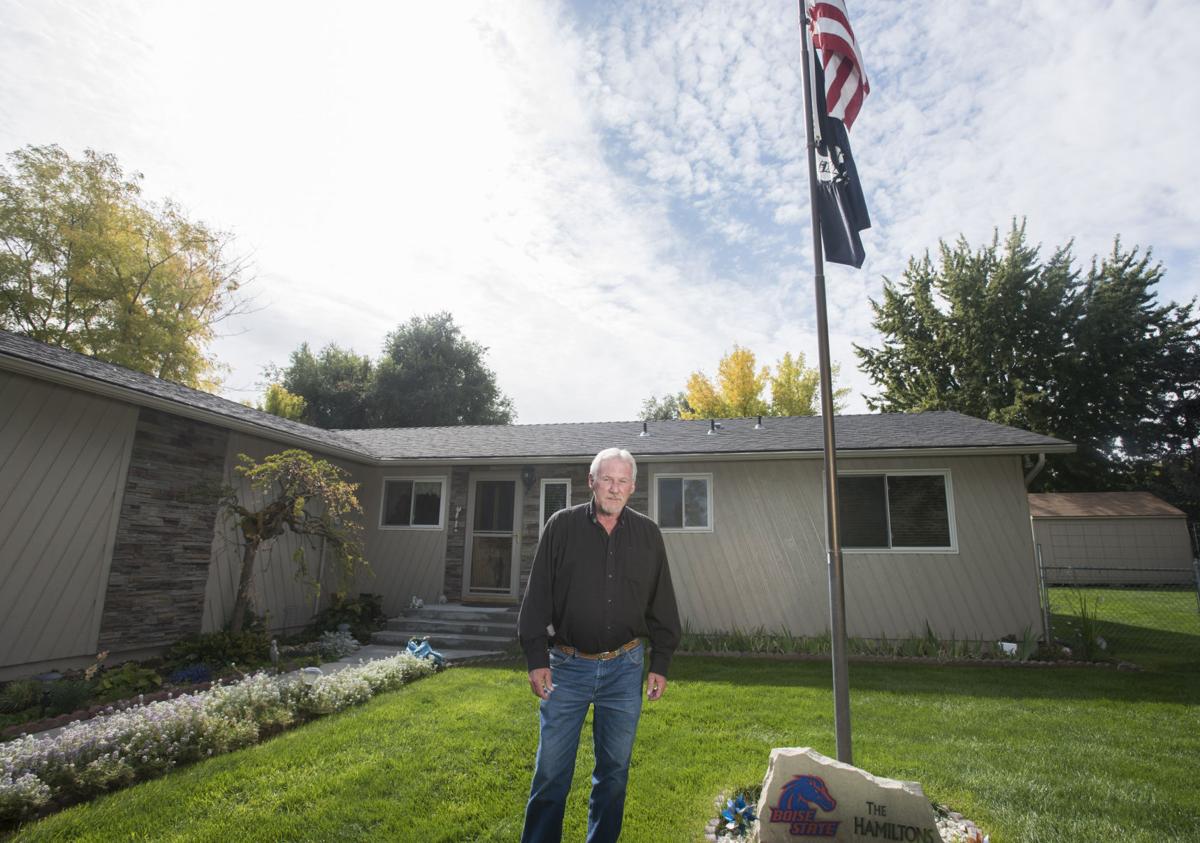 Bill Hamilton, second on the right of the back row, celebrates with his buddies during basic training.

Bill Hamilton served as a crew chief on a UH-1 helicopter during the Vietnam War. Here he is listening to radio traffic while stationed at Loc Ninh in Vietnam.

Bill Hamilton served as a crew chief on a UH-1 helicopter during the Vietnam War.

Bill Hamilton poses for a picture while stationed at base camp during his time in service.

Ten years ago, Bill Hamilton would not have sat down for a newspaper interview to discuss his military service.

Even now his daughter, Christa Pomtier, and wife, Susan Hamilton, said they were surprised he would tell a reporter about his experiences in Vietnam for publication.

Pomtier doesn't remember her father to be someone who willingly spoke about his Army experiences. He would talk of helicopter crashes, the sounds of gunfire or how he lost his hearing, when asked by his children. He would look through memorabilia with pride in his eyes. But he rarely spoke about the war unprompted.

When Pomtier — who is now 46 — was still a child, the Vietnam War was still a controversial subject in the U.S., so while Hamilton never hid from his history, he didn't make a big deal about it, either.

Hamilton enlisted in the Army a year after graduating high school on his 19th birthday. He served three years, completing three tours in Vietnam.

During the weeks he spent in Alabama for basic training, Hamilton learned to fly helicopters, which he referred to as "ships." He said flying turned him into an adrenaline junky, and missions gave him a drug-like high that he sought out. The worst parts of the war, he recalled, were when he returned to camp and had nothing to do.

Hamilton doesn't shy away from the fact that he killed people in Vietnam. He is open in admitting that the killing didn't bother him — in fact, he said he enjoyed it.

"For every person that I killed, or we killed, that was one more person that couldn't kill a brother," Hamilton said.

Hamilton's Purple Heart story started on a flight mission in support of the 11th Armored Cavalry. It was his first mission as a part of a 24-hour alert team, and he said he didn't even know he was up to fly it at first.

He'd been called in to replace a soldier who was out with a foot injury, but he didn't know when the soldier was officially leaving. He was making his bunk one morning when sirens went off — sounding like the blare of a firetruck — and suddenly people were shouting at him to get to his ship. His platoon leader was glaring at him when he arrived.

The mission was a low-level flight with the Vietnamese jungle bracketing their ship from either side, and it led them straight into an ambush. Their ship was shot up by enemy soldiers, and Hamilton and the pilot were hit in the line of fire.

Half a bullet went into his elbow while shrapnel hit his neck and nearly tore one of his fingers clean off. It hung on by a thin strip of skin. But Hamilton said he didn't feel any fear or pain in the rush of adrenaline he experienced as his unit completed a forced landing.

He also didn't realize that that mission would lead to the Purple Heart. He said he found out a day or two before the awards ceremony, but if he had known earlier he would have refused it.

"What happened to me was nothing, absolutely nothing that compared to other people," Hamilton said.

Hamilton said the awards he received for his service were "idiotic," because he didn't do anything to deserve them, and he knows other soldiers who did more and didn't receive anything. In his opinion, that deteriorates the value of those awards.

Pomtier said she didn't realize her father was a Purple Heart recipient until after she moved out of the house. Hamilton's wife, Susan, said they never displayed it. Within the last 10 years, Pomtier said, she has finally started to appreciate what Hamilton's Purple Heart means, but she knows her father would never seek out recognition for his actions.

"It's not about him, it's about everybody else," Pomtier said.

The Vietnam War was controversial and heavily protested, but Hamilton said he didn't experience much of it first-hand, other than the groups of people who yelled at him as he arrived home at the airport. He said as long as they didn't get in his face, it wasn't a big deal.

Hamilton met Susan while on leave in the Army, and they were married shortly after he returned home in 1970. Dead broke, Susan said they honeymooned in their apartment together for three days, and he went back to work on Monday.

Susan said she didn't pay attention to the Vietnam protests and never pressed Hamilton for information about the war. Though she said Hamilton didn't let the war define him, she could see that it affected him. Early in their marriage he had a reoccurring nightmare about a helicopter crash, and it didn't go away until he told her about it.

But she said she let him come to her when he wanted to talk about Vietnam. She didn't ask questions because she knew she couldn't understand what he went through.

"You can't be married for 47 years and not give him some space," she said.

Their family moved to Nampa in 1984, and following his retirement in 2011, Hamilton said he spends his time helping other veterans. Susan said it's only been in recent years that he's reached out to other veterans and started being more open about his experiences, and she thinks it's great.

Hamilton was forced to retire due to medical reasons caused by Agent Orange — a powerful herbicide used by the U.S. military in Vietnam to destroy forest cover for enemy troops. It was later shown to cause serious health consequences for Vietnamese people as well as veterans and their families.

Hamilton said the most disappointing part of the war for him was not the negative response of the public toward veterans, but how the government responded in the aftermath of Agent Orange. It took years for U.S. officials to admit to the problems the herbicide caused, he said, and he knows there are veterans dealing with the side effects without treatment today.

Despite it all, Hamilton still has pride for his country. He serves as the commander of the Idaho chapter of the Military Order of the Purple Heart, as well as the welfare officer. And he knows one thing with conviction.

"I would go again," Hamilton said.