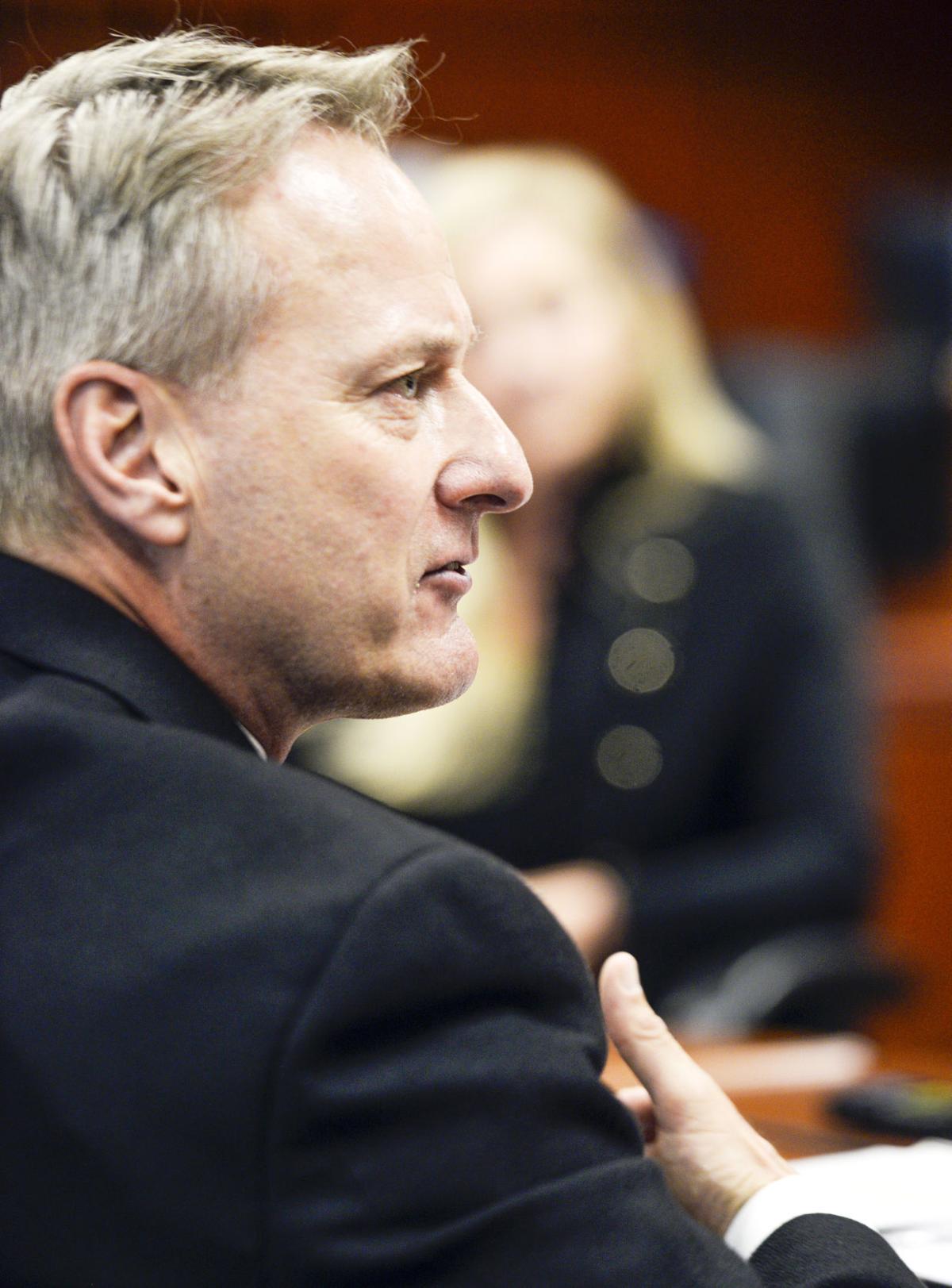 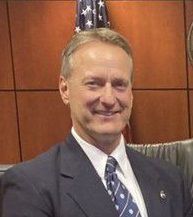 BOISE — Six candidates for Ada County Sheriff gave short speeches and worked the crowd at a meet and greet with the Ada County Republican Central Committee on June 12 at Storey Park in Meridian.

At a follow-up meeting at the Ada County Courthouse on June 17, five of the candidates were nominated by precinct committeemen and around 100 committeemen voted in several rounds of secret ballots to narrow the list to three.

The top three candidates were then forwarded to the Ada County Board of Commissioners who would select a successor to former Sheriff Steve Bartlett from that trio. Bartlett unexpectedly resigned from his post May 31, less than six months into his second four-year term. The task of putting forth the candidates to succeed Bartlett fell to the county’s GOP Central Committee because Bartlett had been elected as a Republican.

But in mid-June, right after Traubel was announced as one of the nominees, concerns were raised regarding some of his past statements and writings.

Over the past decade Traubel hasn’t kept his views close to the vest. He’s done several interviews with right-wing media, published books and written letters to the editor of area papers.

Traubel wrote “Red Badge: A veteran peace officer’s commentary on the Marxist subversion of American Law Enforcement & Culture” in 2016 and “Can They Do That?: How Police Get Around The Fourth Amendment” in 2019.

During public interviews with the Ada County commissioners on June 30, many of Traubel’s more troubling views were discussed, including that he blamed Jews for Soviet violence, said many aspects of World War II and Nazi Germany were exaggerated or a lie and suggested at least 50% of rape allegations were false. He’d also written that “single mothers are not an economically viable unit and must require state support to survive, these actions further the original objective of the neo-Marxist ideologues to destroy families and marriages, and thereby our republic.”

Despite that, when Traubel’s interview was done, four rows of audience members stood and applauded for him.

Among those Republicans who’d written in support of Traubel were former state Rep. Dieter W. Bayer, of Boise, and Rep. Karey Hanks, of St. Anthony.

“I believe one candidate is the most qualified and will prove to be trusted to carry out the duties required in this most vital office,” Hanks wrote. “We are in trying times and need Constitutional sheriffs in our counties in Idaho.”

Ultimately the commissioners selected Eagle Police Chief Matt Clifford on a two to one vote.

Prior to the commission’s vote Clifford had the most support from sitting Treasure Valley elected officials. The Garden City police chief, the Meridian mayor and city council, several Ada County Sheriff’s Office employees, the mayor of Eagle, the mayor of Kuna, and the Garden City and Star mayors all wrote in to express support for Clifford.

The commission’s lone Democrat Kendra Kenyon motioned for Clifford to be named sheriff. After a pregnant pause awaiting a second, Commissioner and Chairman Rod Beck seconded the decision himself. Commissioner Ryan Davidson, the former Ada County GOP chairman, was the lone vote against Clifford’s selection.

Davidson had wanted an outsider to lead the department and Clifford was a longtime sheriff’s office employee. But Davidson conceded that Traubel’s writings would be a distraction if he were to serve as sheriff.

“It’s my worry that the author’s message is probably not being perceived by the public in the way that he wanted it to be,” Davidson said the day of the sheriff vote.

In the wake of the selection, many have questioned, in letters to the board and online, how Traubel even came to be considered in the first place by the county’s GOP central committee given his controversial public-facing views.

“I would say that that material, which I believe came from his book, was really disclosed after the process of selecting the three names had already occurred. I was not aware of any of those,” Ada County Republican Central Committee Chairman Victor Miller said. “I would say in general the precinct committeemen were not aware of any of the remarks, mostly I believe from his book.”

Miller is a precinct committeeman as well, representing Precinct 1416, in Eagle.

Miller was not “plugged in,” to what was said since his daughter got married the day before the interview with the commission, he said.

“When I read those quotes, I was concerned by some of the statements that were made that seem to be quotes that came from his book,” he added.

Miller wasn’t alone in his concerns, he said.

Commission Chairman Beck, whose uncle fought in World War II, told the Idaho Press after the vote that Traubel’s writings were an issue, but did not elaborate any further.

The backlash to Traubel’s candidacy appeared to reveal growing fault lines in Idaho’s GOP. “The Republican family is a pretty big family, right? Just like any political party … there’s going to be differences,” Miller said. “I would still contend what Ronald Reagan said: if I agree with someone 80% of the time, I consider them an ally not a 20% traitor.”

But Traubel himself said there was a clear local and national split in the Republican Party. The division comes from what percentage of Republicans see the extent of Marxist infiltration underway, he said in an emailed statement to the Idaho Press on Friday.

“Being voted the No. 1 candidate by the Ada County GOP Central Committee was a great honor,” Traubel said. “Clearly my priorities and message connected with the majority.”

He added he was struck by how commissioners Kenyon and Beck had treated him during his interview, which he said eclipsed his “unique suitability to serve as sheriff in these transformational times.”

Traubel also noted his book defends itself when read cover-to-cover.

“The standing ovation from the crowd I received upon turning to face them at the conclusion confirmed in my mind the disconnect between the majority on the BOCC and the public,” Traubel said.

During the selection process, more moderate Republicans such as former Ada County Sheriff Gary Raney, along with the Idaho 97 Project, a self-described political advocacy group that states it wants to work across party lines to counter extremism, worked both behind the scenes and in the open to get Clifford appointed.

Star Mayor Trevor Chadwick rallied the mayoral endorsements for Clifford, someone he said he’s known for a while.

Chadwick is a precinct committeeman representing Precinct 1405. He nominated Clifford at the Central Committee meeting. Though Chadwick is a Republican, his mayor’s office is nonpartisan.

“I don’t think there’s a split (in the Republican Party). There’s just different ideologies,” Chadwick said. “We’re going to agree on 90%, then there’s that 10% we’re not going to agree on … We always have the differences of opinion and, when it comes time, (we) have to come together.”

But Raney believes there is a division within the party, both nationally and in Idaho. The other candidates for sheriff weren’t bad people, he said, but there was a clear choice.

“There has been (a split) for a long time, between the far-right wing part of it and the moderates,” Raney said. “I think the right wing was represented in the nomination when they put the other two candidates before Clifford.”

Idaho 97 Project Executive Director Mike Satz views the divide in Idaho politics as between the far right and everyone else.

“I’ve really got to hand it to both of the commissioners, Commissioner Kendra (Kenyon) and Commissioner (Rod) Beck, they really demonstrated how leaders can come together across political lines,” Satz said.

Once the nominees were announced, the Idaho 97 project starting researching them. The group found a video showing Traubel praising the constitutional sheriffs movement.

The group’s members also talked to active and retired law enforcement, to help develop a plan after doing their research on the nominees.

“We basically put together an email campaign and then also provided information on how to contact the county commissioners in other ways,” Satz said. “We had a template ready … it also was a template that could be edited or changed.”

The day after Traubel’s interview with commissioners, more emails poured in, both from those using the Idaho 97 template and those writing individually.

“It’s very telling that all of the REPUBLICAN mayors in Ada County support Clifford... I’m proud that our party has not gone totally mad,” wrote Star resident Mark Anderson. “We better hope that the BOCC does a better job in their evaluation and appointment process. Otherwise, the moderate Republicans and Democrats will bring forth fury in next year’s elections.”

“I endorse Matt Clifford for the vacant Ada County Sheriff position. He has the strongest background and the least radical views,” O’Brien wrote. “I am a moderate Republican, and he is the only candidate I can support.”

But there was also support for Traubel from the right, as others wrote in saying Clifford had the support of Democrats such as Kenyon and Traubel did not, which made him the correct choice.

Darrin Kimball did not state his political party but said the level of coordination against Traubel was a concern.

“Many of us are being told you are being pressured to choose any candidate other than Traubel. As independent thinkers, that should give you pause,” Kimball, a lifelong Ada County resident, wrote. “You have been elected to key positions in local leadership; please choose the candidate who will best defend our personal liberties; which is Traubel.”

Even Traubel himself wrote in, to say he was professional and bilingual and to provide sources for some of his comments. He said the women’s role in society was often as a caretaker, but his professional evaluations define him, not his writings.

“As Sheriff, I would continue to be as genuine, professional, thorough, unbiased and objective as I’ve always been,” Traubel said.

“This is what happens in parties,” Miller said. “But the differences between Republican values and Democratic values are still pretty stark.”