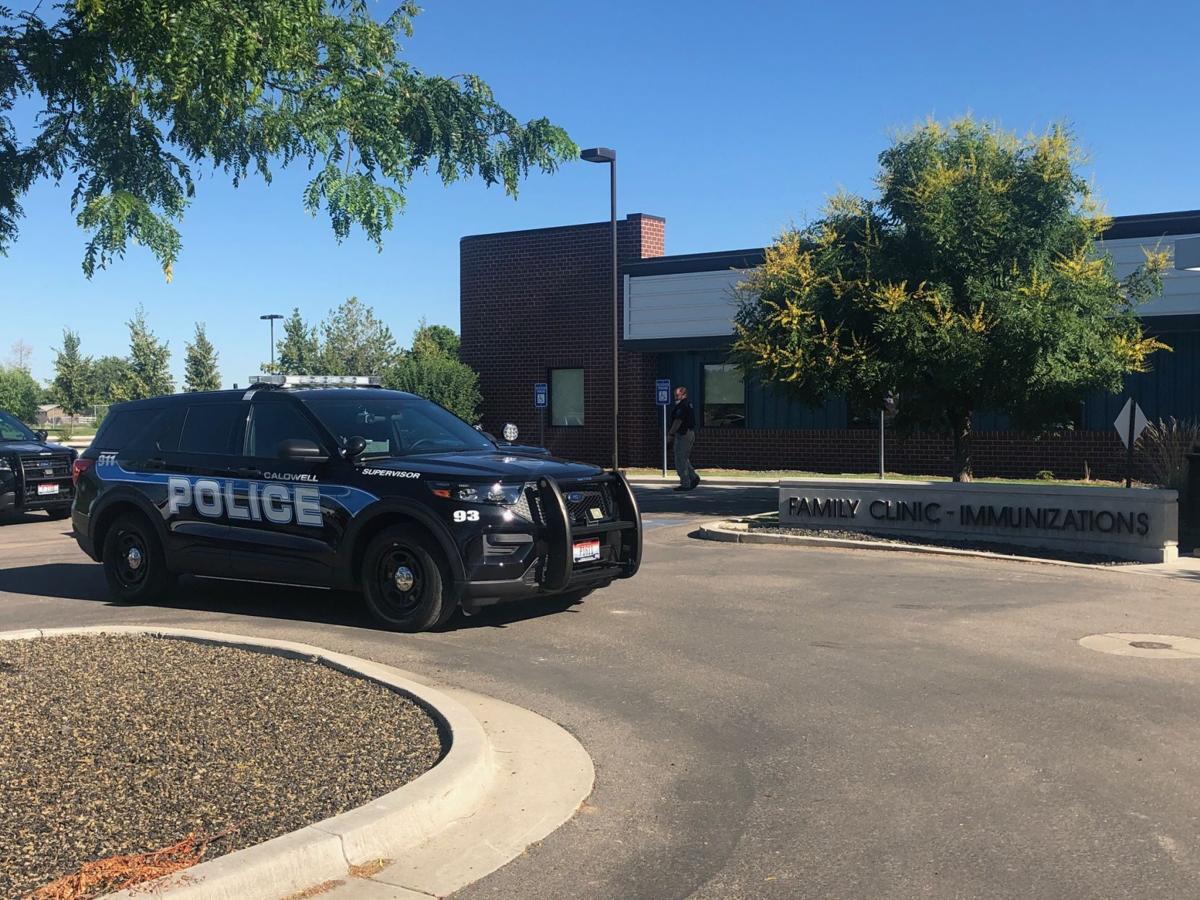 A Caldwell police vehicle sits outside Southwest District Health’s facility after police diffused a situation in which a group forced their way into the building’s lobby trying to attend a Board of Health meeting Thursday morning. 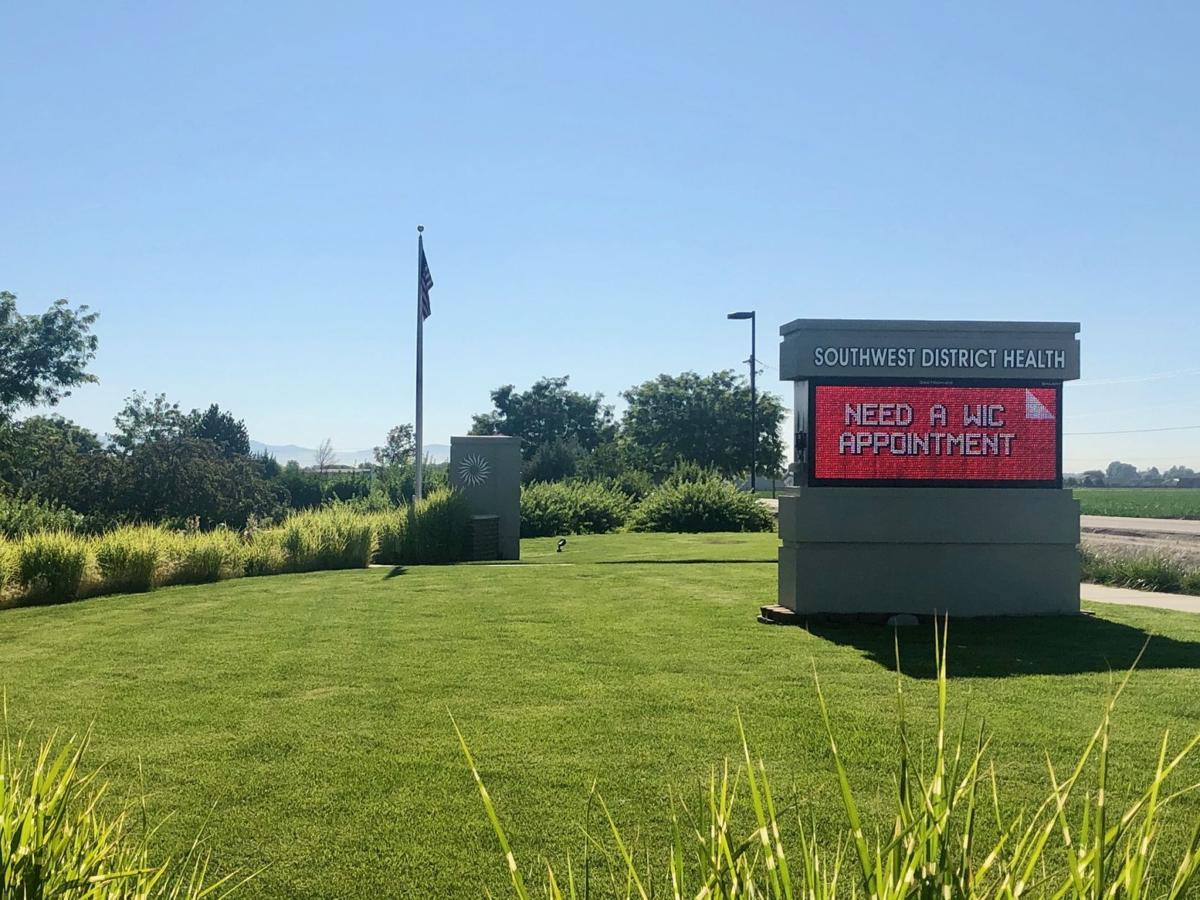 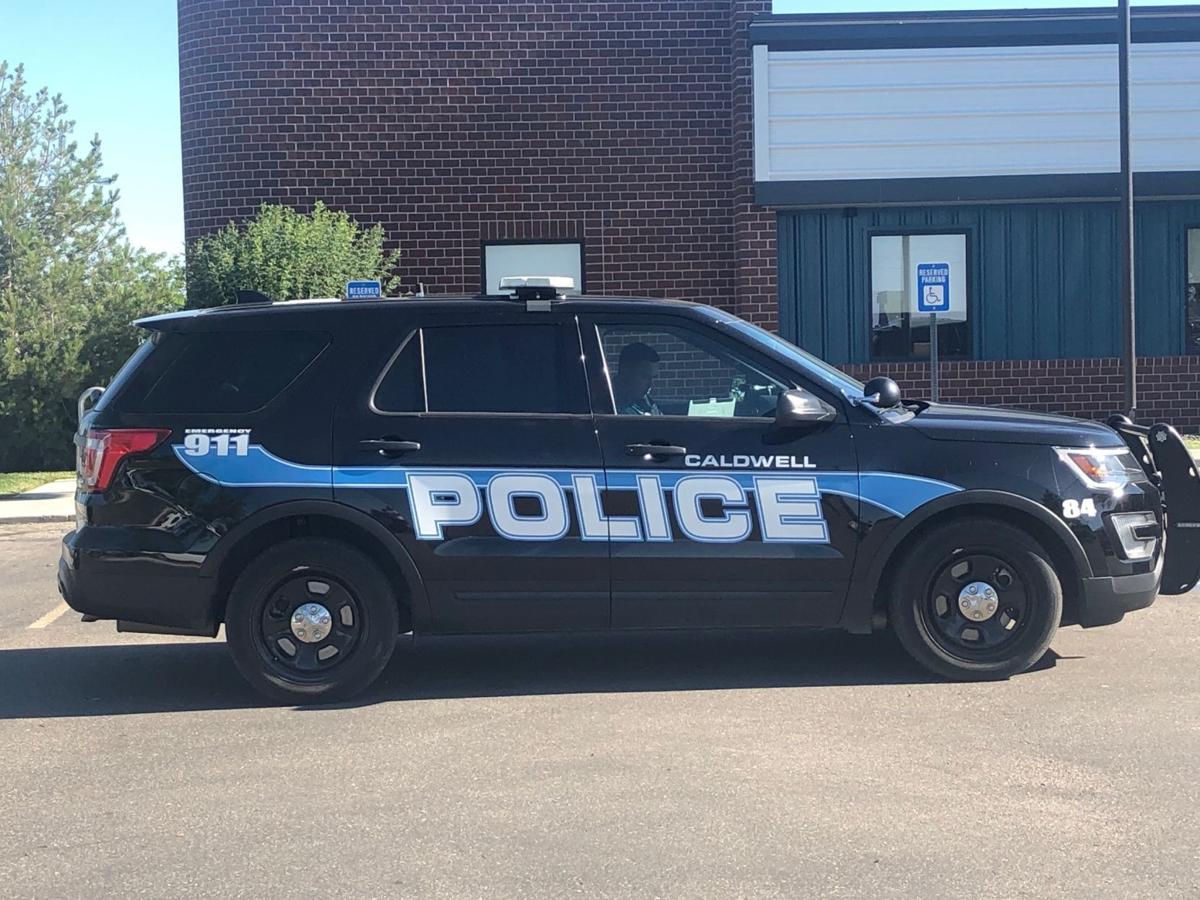 A Caldwell police officer sits in his vehicle outside Southwest District Health's facility after police diffused a situation in which a group forced their way into the building's lobby trying to attend a Board of Health meeting Thursday morning. 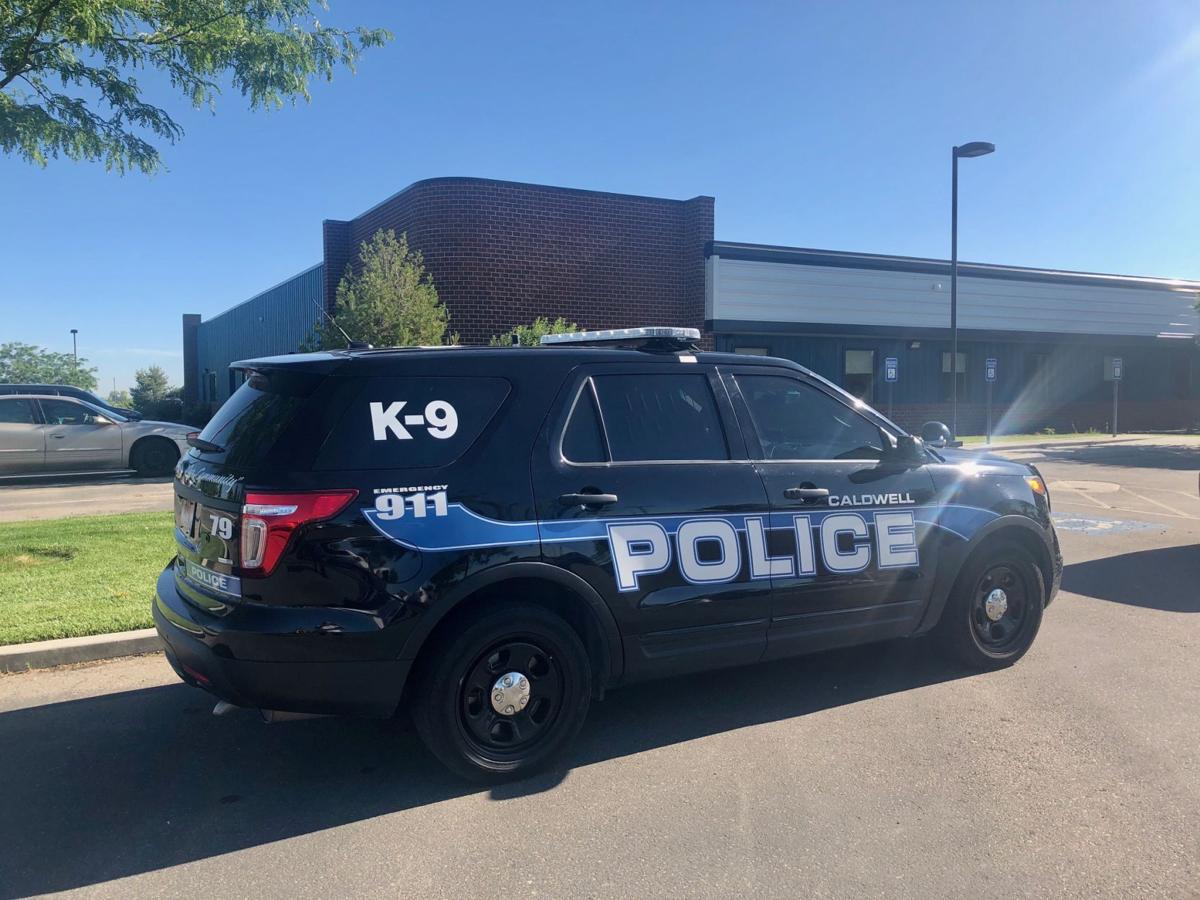 A Caldwell police vehicle sits outside Southwest District Health's facility after police defused a situation in which a group forced their way into the building's lobby trying to attend a Board of Health meeting Thursday morning.

A Caldwell police vehicle sits outside Southwest District Health’s facility after police diffused a situation in which a group forced their way into the building’s lobby trying to attend a Board of Health meeting Thursday morning.

A Caldwell police officer sits in his vehicle outside Southwest District Health's facility after police diffused a situation in which a group forced their way into the building's lobby trying to attend a Board of Health meeting Thursday morning.

A Caldwell police vehicle sits outside Southwest District Health's facility after police defused a situation in which a group forced their way into the building's lobby trying to attend a Board of Health meeting Thursday morning.

The district is only allowing public access to meetings virtually because of the pandemic, something allowed by the governor's emergency proclamation in March.

The district's Board of Health — which oversees Canyon, Gem, Payette, Washington, Owyhee and Adams counties — was scheduled to talk with medical professionals at 8:30 a.m. about research on face coverings.

The meeting was accessible through Zoom and by phone, but a group of people showed up wanting to attend in person.

Caldwell police were called to the scene after some of them tried forced entry into the meeting room, Caldwell Police Lt. Dave Wright told the Idaho Press. He estimates there were 50 people there.

"They just wanted the ability to attend the meeting," Wright said.

Board member Tom Dale, a Canyon County commissioner, told the Idaho Press Tuesday he witnessed two groups of people outside the health district's building. One group, he said, wanted to listen to the meeting and voice their opinions. The other group, he said was a led by Ammon Bundy and "insisted on things that were not conducive of holding a meeting."

Dale and a few other board members were at Southwest District Health in person, others joined over Zoom.

"There are a lot of variations of options that could be recommended, and that is what we wanted to do in this meeting, was share input from the doctors and try to come to a reasonable decision going forward," Dale said. "But due to the state of affairs in the lobby of the building, that was not possible."

Saint Alphonsus President Travis Leach, who attended the meeting via Zoom, said the meeting lasted about 35 minutes before it was canceled and had about 300 people listening. He did not get the chance to share his statistics, which he said is unfortunate.

"We have some alarming statistics," Leach said.

Saint Al's Nampa hospital has 10 patients with COVID-19 in its intensive care unit, which is half the unit's capacity, Leach said. He said the rate of positive tests Saint Al's has administered has increased to 20% compared to about 4% a month ago, and that percentage continues to rise.

A spokesperson for St. Luke's Health System, in a written statement provided to the Idaho Press, also mentioned rising numbers of cases as a cause for concern, noting "48% of all the COVID-19 positive cases in Canyon County have been reported just in the last 11 days."

“Masks work. They save lives. Every day that goes by without action will negatively impact public health,” Dr. Jim Souza, St. Luke’s Chief Medical Officer and practicing pulmonologist, wrote in the statement.

Souza had been invited to speak at Thursday's board meeting.

Members of the public weren't denied access to the building but were asked to follow a requirement for screenings and face coverings in place for all Southwest District Health buildings, the health district said in a press release Thursday evening.

When trying to get in the building, Bundy, who wasn't wearing a mask, confronted a man with Southwest District Health who was trying to keep the group outside, as shown in a video shared to Facebook by Lori Marr, who stood behind Bundy.

The man asked Bundy to step outside. When Bundy refused, the man told him he needed to stay back.

"No, you need to stay back," Bundy replied, "and let the people in."

Bundy later forced his way past the man and into the lobby. Others followed, refusing to adhere to screening guidelines, according to the district.

Bundy described the encounter to the Idaho Press as "a little bit of a peaceful standoff." The situation was diffused by Caldwell police, whose officers acted as mediators between the Board of Health and the group gathered outside, ultimately leading to the postponement.

According to Southwest District Health, "The majority of the protesters were directed to a meeting room able to provide physical distancing measures for those in attendance and were respectful while waiting to view the meeting. A small group of those gathered were armed and continued to create disruptions in the facility’s foyer, harassed staff in the parking lot, and peered into the building windows scaring staff who were working."

Bundy said he wasn't there to debate a possible mask mandate, but the Board of Health's authority to enact one. He said he intends on being present for the next meeting, and hopes the public will have in-person access for it. He said he believes future situations could get violent if there isn't, and Thursday's measures were aimed at preempting possible physical conflict in the future.

Dale told KTVB the district will coordinate with Caldwell Police ahead of the next meeting, he said. The new date for the meeting is still being determined, according to the district.

Bundy, who lives in Gem County, is known for leading the occupation of the Malheur National Wildlife Refuge in 2016, and for protests this year against Gov. Brad Little's stay-home order and against a Meridian police officer outside his home after the arrest of a woman trying to use a playground against the city's emergency order.

"Liberty is truly being threatened right now. … You've got a group of individuals who have been appointed by the county commissioners believing that they have the authority to invoke the force of law on people if they don't wear a mask, and then they want to do it behind closed doors without any observance from the people," he said. "That's not OK."

During the coronavirus pandemic emergency, Gov. Little, on March 18, suspended by proclamation the portion of the Idaho Open Meeting Law that requires a person to be physically present at the meeting location and to allow members of the public to physically attend.

In exchange, all members of the public were guaranteed access to all meetings via telecommunications, and agencies were further encouraged to publicly post all meeting materials online so the public could access them during the meeting.

Media organizations including the Idaho Press Club were consulted before the governor issued the order. It is in effect for the duration of the pandemic emergency. Here's a link to governor’s proclamation.

Southwest District Health's meeting agenda, which was distributed Tuesday evening, said: "Due to COVID-19, Board of Health meetings for the remainder of 2020 will be held virtually or via video conference unless otherwise noted. In person attendance will be limited to Board of Health members and key SWDH staff members."

The agenda offers a link to the Zoom meeting and instructions for calling in to the meeting.

However, the audio during the start of the meeting was "completely unintelligible," according to Idaho Reports host Melissa Davlin, who serves as vice president of the Idaho Press Club and chairwoman of the First Amendment Committee.

"This is one of the worst examples of a public meeting held via Zoom I've seen so far, and at such a critical time in the pandemic, too," Davlin said on Twitter. "This isn't accessible to the public at all."

As masks have become mandated in areas across Idaho, including in all of Ada County, many have wondered if Canyon County will be next, considering its rising cases and related deaths, and proximity to Ada County. On Wednesday, the number of new daily COVID-19 cases in Canyon County surpassed those in Ada.

A member of Southwest District Health's Board of Health has been openly critical of wearing masks. "They all come from China, let that sink in. What's the goal?" Adams County Commissioner Viki Purdy posted to Facebook on July 2.

"It is obvious to me that you have done little or no research into the effectiveness of wearing masks," she said in a later post. "I’m one of the few voices that the people of Idaho has speaking out when they find errors made by the decision makers that run our state. The people of this country and our state are entitled to make up their own minds about what is and is not good for them."

Purdy has also shared several posts advocating against wearing face coverings — many of which have been flagged by Facebook for promoting false information. She did not respond to the Idaho Press' request for comment this week.

Health care professionals, however, have united to call for a statewide mask mandate, and they urge the public to wear face coverings.

Leach said to Saint Al's officials, wearing masks is not a political issue, but a public health issue.

Central District Health’s Board of Health on Tuesday afternoon issued a mask mandate for Ada County, as multiple cities, including Boise, have already done. Gov. Brad Little’s office said he has no plans for a statewide mandate.

Idaho’s seven health districts are independent agencies that each have a board of health with representatives from each county in the district, appointed by county commissioners for a five-year term.

Idaho code also allows for the appointment of a physician representative to the board. The board then hires a director to oversee the day-to-day operations of the health district.

In addition to Dale and Purdy, the members of Southwest District Health’s Board of Health include:

The board last discussed a possible mask mandate during its July 7 meeting, and ultimately decided against it.

Following the last meeting, SWDH Director Nikki Zogg told KTVB on July 9 the board wasn’t planning on mandating anything at that point, but instead, it was asking residents “to do their part,” by wearing a mask and maintaining social distancing guidelines.