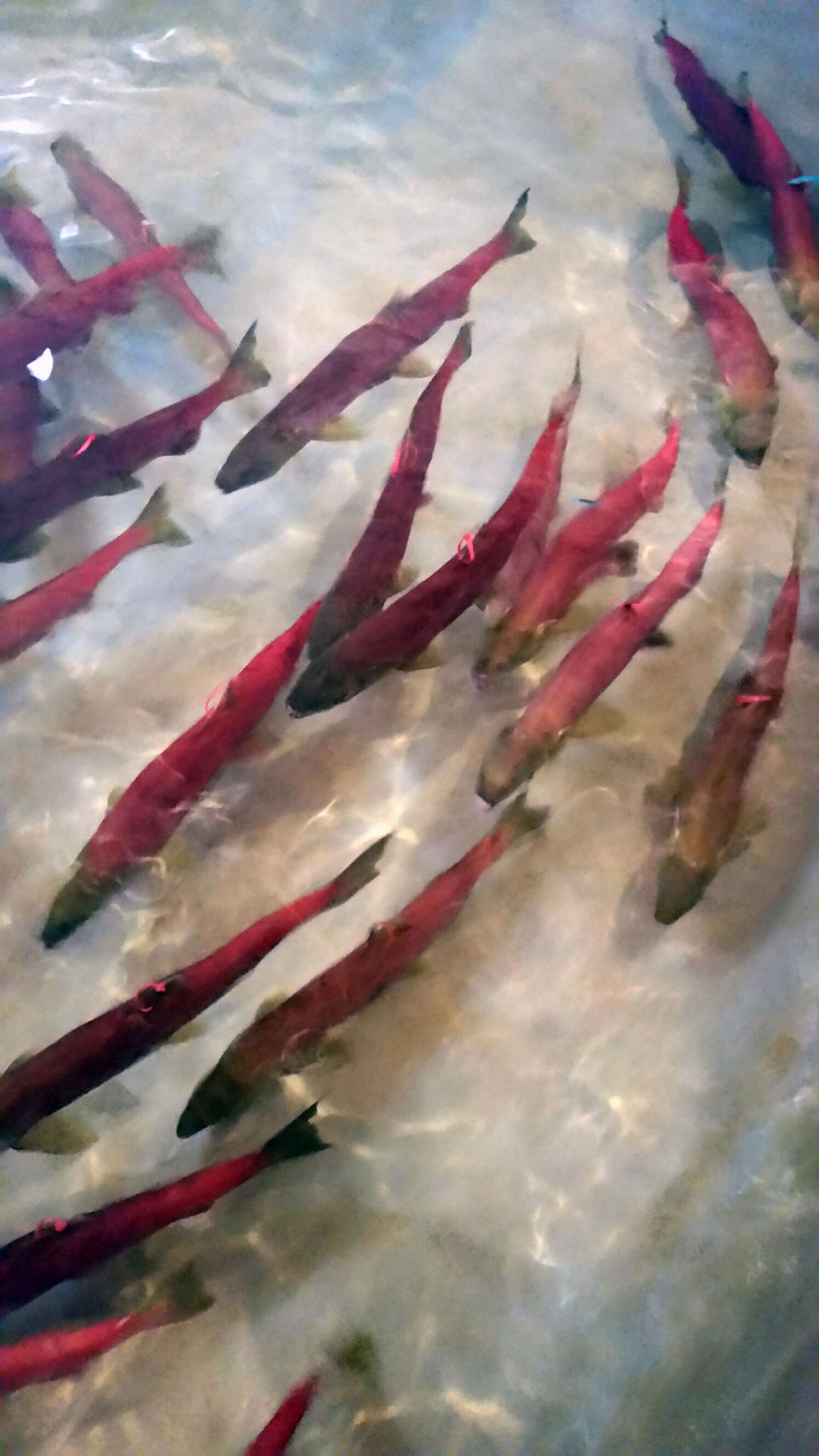 In this Sept. 26, 2017, file photo, provided by Idaho Fish and Game, Snake River sockeye salmon that returned from the Pacific Ocean to Idaho over the summer swim in a holding tank at the Eagle Fish Hatchery in southwestern Idaho. 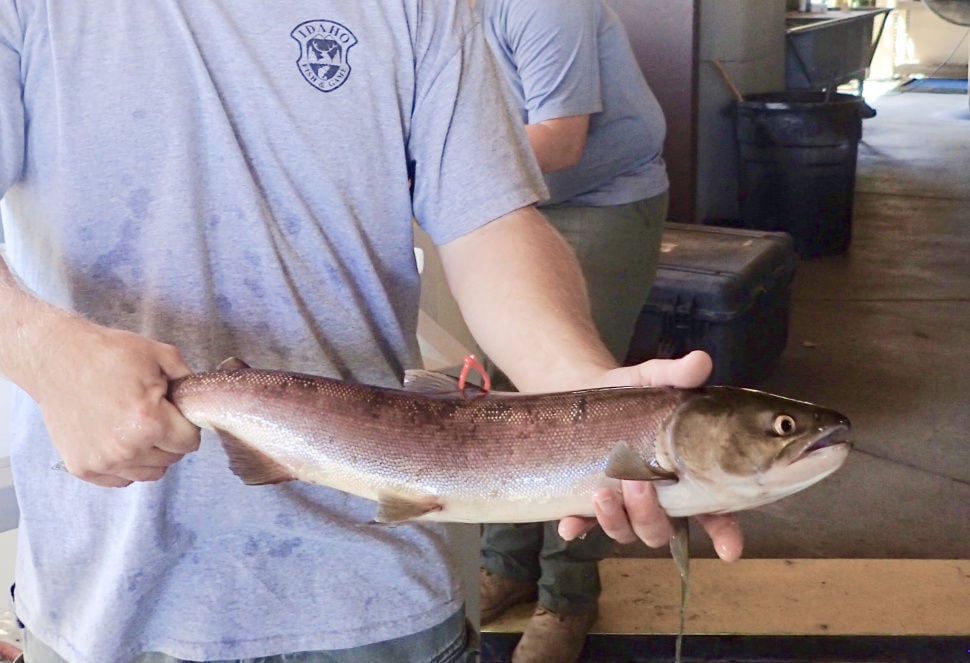 The first sockeye salmon to return to Idaho this year. 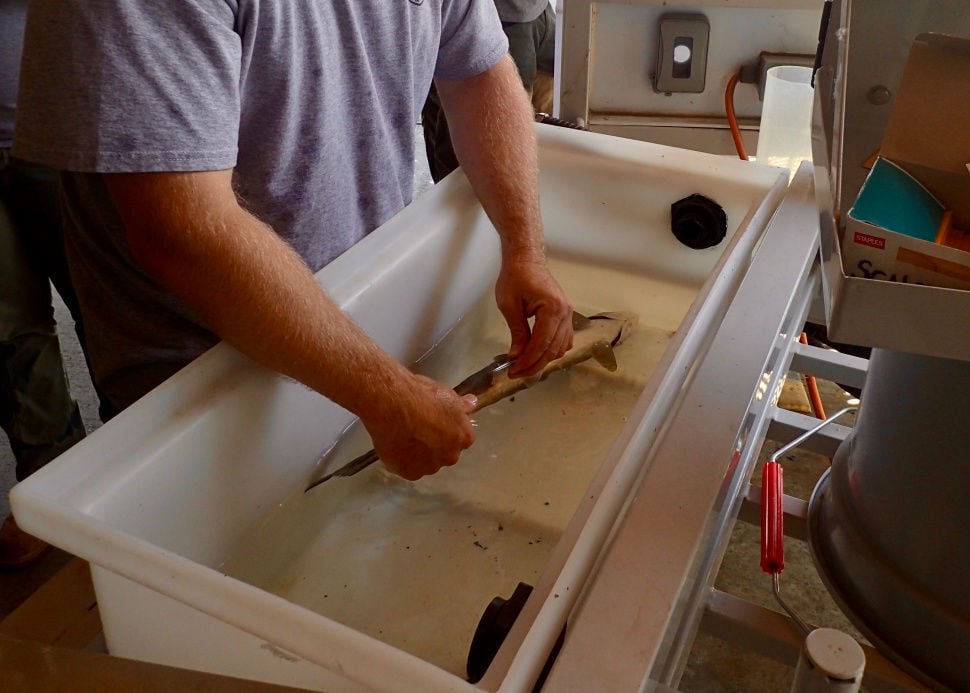 An Idaho Fish and Game staff member collecting a genetic sample from a sockeye salmon earlier this month.

In this Sept. 26, 2017, file photo, provided by Idaho Fish and Game, Snake River sockeye salmon that returned from the Pacific Ocean to Idaho over the summer swim in a holding tank at the Eagle Fish Hatchery in southwestern Idaho.

The first sockeye salmon to return to Idaho this year.

An Idaho Fish and Game staff member collecting a genetic sample from a sockeye salmon earlier this month.

As of Monday, 16 sockeye salmon had made it back to Redfish Lake in central Idaho.

The iconic Pacific salmon species has started its return to Redfish Lake this season after a decade-low 17 sockeye salmon — which give the lake its name — made their way back to Idaho in 2019.

The returning salmon are part of an ancient cycle that has been disrupted by hydroelectric dams, climate change and other human infringements on waterways across the Northwest. This year should see better return rates than last year, and Idaho Department of Fish and Game fishery experts Dan Baker and John Powell said the sockeye’s survival is not totally in jeopardy yet.

So far in 2020, 412 sockeye have passed the Lower Granite Lake Dam on the Snake River in southeastern Washington. Those fish are working their way up the river into Idaho, where they will eventually be trapped by IDFG and transported to the Eagle Hatchery, where genetic testing will determine if they will be incorporated into the captive broodstock that has kept sockeye salmon populations alive in Idaho.

In the late 1800s, between 25,000 and 30,000 sockeye salmon returned to the Stanley Basin. But as dams were thrown up across their migratory paths, the sockeye’s range and population were drastically reduced.

There are two sockeye breeding programs that maintain captive breeding populations of salmon: IDFG’s Eagle Fish Hatchery and the National Oceanic and Atmospheric Administration Fisheries’ Burley Creek Fish Hatchery. Those two programs are intended to prevent the extinction of the sockeye as well as keep the population genetically diverse.

“Therefore, even if no adult sockeye salmon returned from the ocean the Redfish Lake sockeye salmon population would continue to persist through the efforts of this program. A year with no returning sockeye is obviously the worst case scenario, and will hopefully never come to pass,” Baker and Powell said.

Idaho Conservation League spokesman Scott Ki said that while the higher numbers of returning sockeye in 2020 was encouraging news, the fish still face considerable obstacles to their continued survival.

“Factors that keep wild salmon from returning include warm water and ocean conditions, predators, degraded habitat, commercial and sport fishing (harvests), hatchery fish and dams (hydropower),” Ki wrote in an email. “It’s a wonder that any of these fish can still make it back.”

Ki also noted even if all 400 sockeye salmon that have passed the Lower Granite Lake Dam make it back to Redfish Lake to spawn, that number of fish is still far below the minimum population to delist the species from the Endangered Species List or to recover “abundant, harvestable stocks to Idaho.”

“To put this into perspective, even if you released a million smolts (IDFG’s goal for the number of smolts raised at its Springfield Hatchery in Springfield, Idaho near Blackfoot), you’d need at least 40,000 sockeye adults to return in order to restore abundant, harvestable stocks to Idaho. 400 is more, but very far from being enough,” Ki wrote.

According to IDFG experts, there are a few population benchmarks that could delist the Sawtooth Valley sockeye salmon. One is a 10-year average natural-return of 1,000 sockeye to Redfish Lake, 1,000 to Alturas Lake and 500 to Pettit Lake. From 2010-2019, the annual sockeye return to the Sawtooth Basin has averaged 558 fish in total.

“The current goal of the recovery program is to return enough anadromous adults from our hatchery releases to recolonize the natal habitat in the Sawtooth Valley lakes and increase natural production,” Powell and Baker wrote.

This story has been updated to reflect that the 2019 return of 17 sockeye salmon was a decade-low number of fish, not the all-time record. There have been several years where no fish have returned to Redfish Lake.