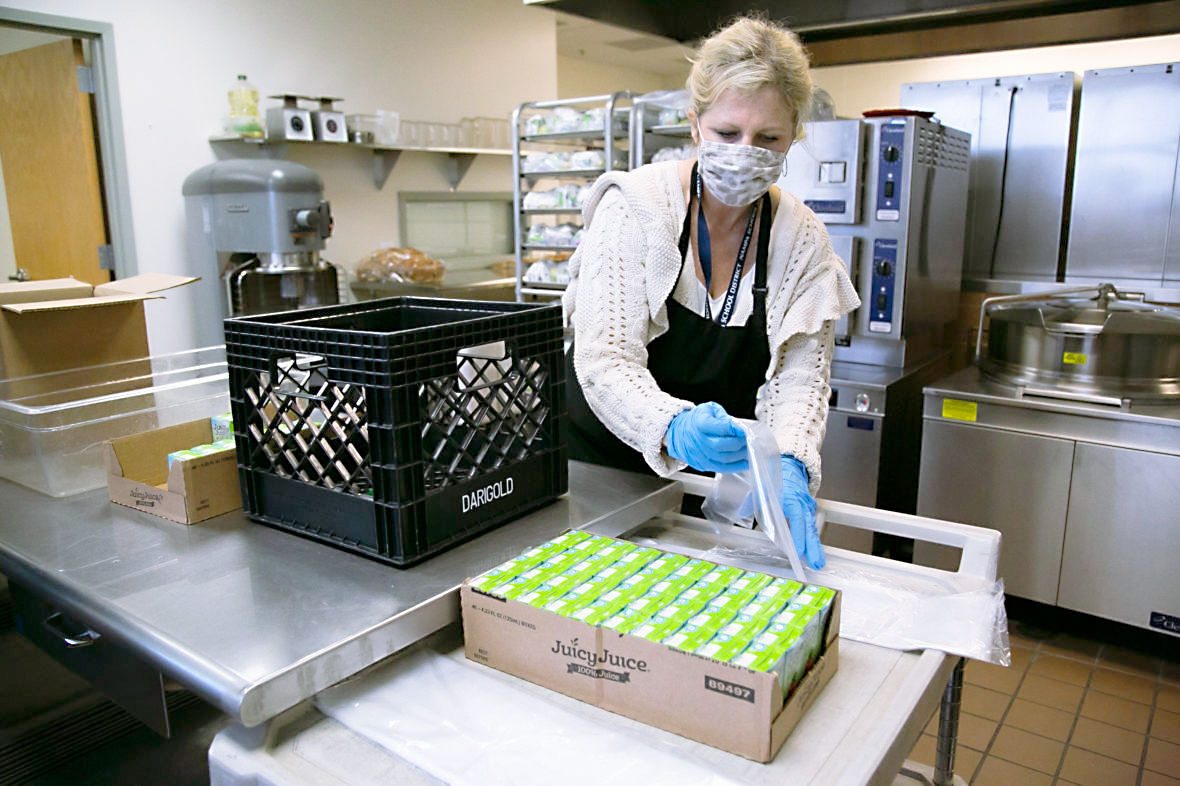 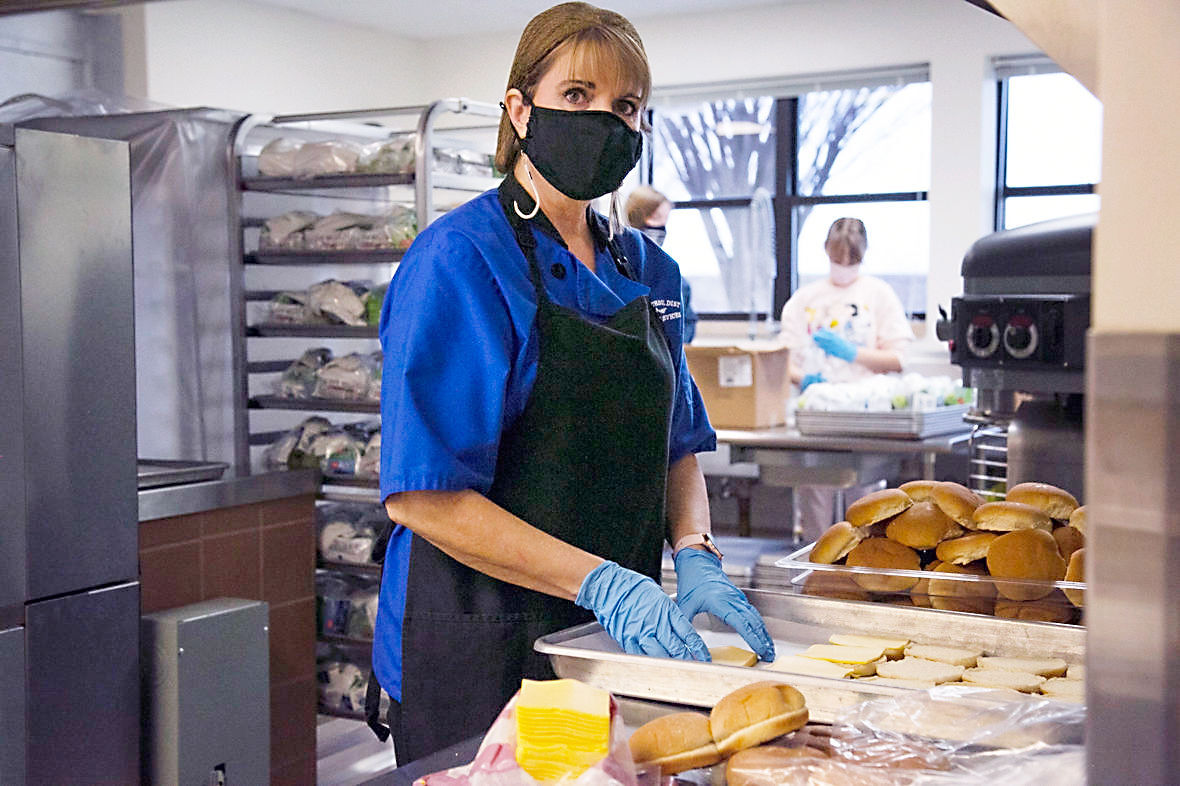 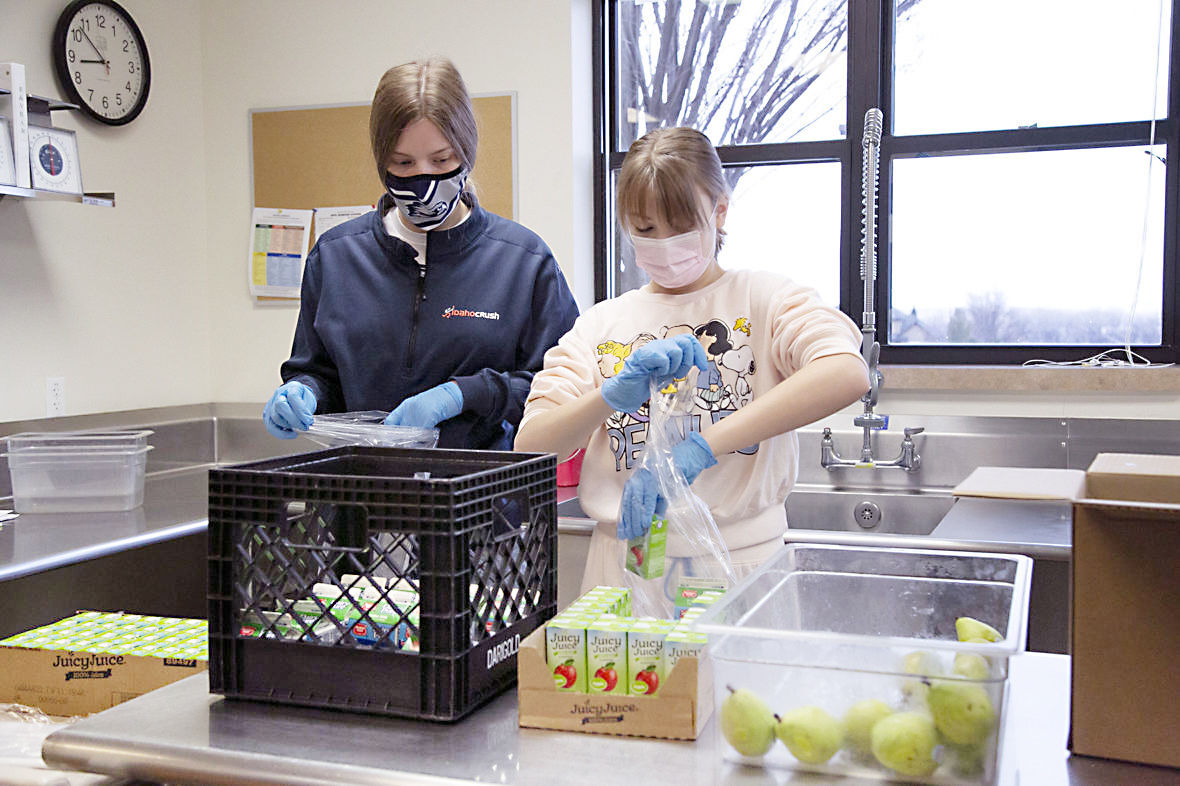 Two Nampa students, the daughters of a district teacher, help pack student breakfasts during one of their remote-learning days.

Two Nampa students, the daughters of a district teacher, help pack student breakfasts during one of their remote-learning days.

Jody Morris, kitchen supervisor at Nampa’s Lake Ridge Elementary School, is one of only two staff members working in the school’s kitchen.

Most years Morris would have a team of three or four to cook and serve close to 500 meals a day. But the turbulence of COVID-19 has spelled chaos for Nampa’s nutrition department. The district laid off nearly two dozen kitchen staff in November, when classes moved online and Nampa saw a huge drop in student demand for free meals. As kids return to buildings, Nampa is looking to rehire — but struggling to fill low-wage positions when staffers could make more at Costco or Amazon.

Nampa’s trustees could consider moving secondary students back to full-time learning at a board meeting this week, district spokeswoman Kathleen Tuck said. But they’ve got a problem:

“We don’t have any way to feed those kids,” she said.

As Idaho’s largest districts eye a return to full-time learning, they’re struggling to recoup the staff they need to run school buildings.

“Some people think that what determines whether we reopen is just the number of (COVID-19) cases,” Tuck said. “That’s just one thing. There’s a ton of operational stuff that flies under the radar.”

As Morris prepared cheeseburger buns for the students who are learning in-person at Nampa’s elementary schools, older students and staff volunteers helped assemble baggies of fruits and breakfast bars. That task could take one of the kitchen staff up to two hours, Morris said.

“That’s just huge,” Morris said. “Even 15 minutes makes a difference in the day.”

Nampa is trying to rehire 14 kitchen staff positions. The jobs have been on radio ads, and on Facebook, the district is offering a $500 safety incentive to new hires, but still Nampa is having to rely on volunteers to work in lunch rooms. Jobs go unfilled when prospective employees decline the starting pay of $9 to $10 an hour for higher wages in the community. The district is considering asking for parental help, Tuck said, but so far they’ve tried to avoid outside volunteers to limit COVID-19 risk.

Monique McDermott, the district’s executive assistant for elementary and secondary education, has signed on as a kitchen volunteer for the past three weeks.

“See a need, fill a need. They’re just as vital as we are,” McDermott said.

“It was supposed to be a short-term fix, but each week we are begging (for volunteers) again,” Keim said. “…We really are out of ideas.”

Some jobs posted between October and December are just now getting filled, Jackson said. It’s taking the district an average of three weeks to fill open positions.

That could leave West Ada just enough time to bulk up before the district reopens for nearly full-time learning. Trustees voted last week to bring secondary students back to schools four days a week at the end of March.

The Boise School District, instead of laying off nutrition staff, opted to furlough about 100 nutrition workers this fall while still paying for their health insurance. As the district looks at a potential full-time return for secondary students, furloughed nutrition staff are “eager and willing to return,” spokesman Dan Hollar said. If they didn’t return, he said, the district would notify the department of unemployment to say those individuals had declined work, which could make them ineligible for benefits.

Boise’s substitute pool also seems in better shape than it was in the fall when the district switched to online learning because of high absence rates and staff shortages.

District officials told the board of trustees last week that substitute interest is climbing, possibly because substitute teachers are eligible to receive a COVID-19 vaccine. The district also expects fewer staff absences due to quarantine in the spring since many teachers will be vaccinated by the end of March.

While Boise’s kitchens and classrooms might be well-staffed if all kids return, the district is still short on school nurses, classified positions like health technicians, special education paraprofessionals, custodial staff and more.

“We are hoping that being eligible to receive the COVID-19 vaccine will attract applicants,” Hollar said in an email.

Learn more about these jobs in Boise, West Ada and Nampa.